An Israeli teen who was stabbed by an ultra-Orthodox Jewish man at this week’s Gay Pride parade in Jerusalem died of her wounds Sunday.

Shira Banki, a 16-year-old high school student, was one of six people wounded in the attack Thursday. Banki went to the parade to show solidarity with her LGBT friends, according to the Israeli news service Haaretz.

Our magical Shira was murdered because she was a happy 16-year-old – full of life and love – who came to express her support for her friends’ rights to live as they choose. For no good reason and because of evil, stupidity and negligence, the life of our beautiful flower was cut short.

The assailant, Yishai Schlissel, was arrested at the scene. Police in Jerusalem have faced criticism for not keeping tabs on Schlissel, who was released from prison just weeks ago after serving time for a similar stabbing attack at Jerusalem’s pride parade in 2005, in which he wounded three people. 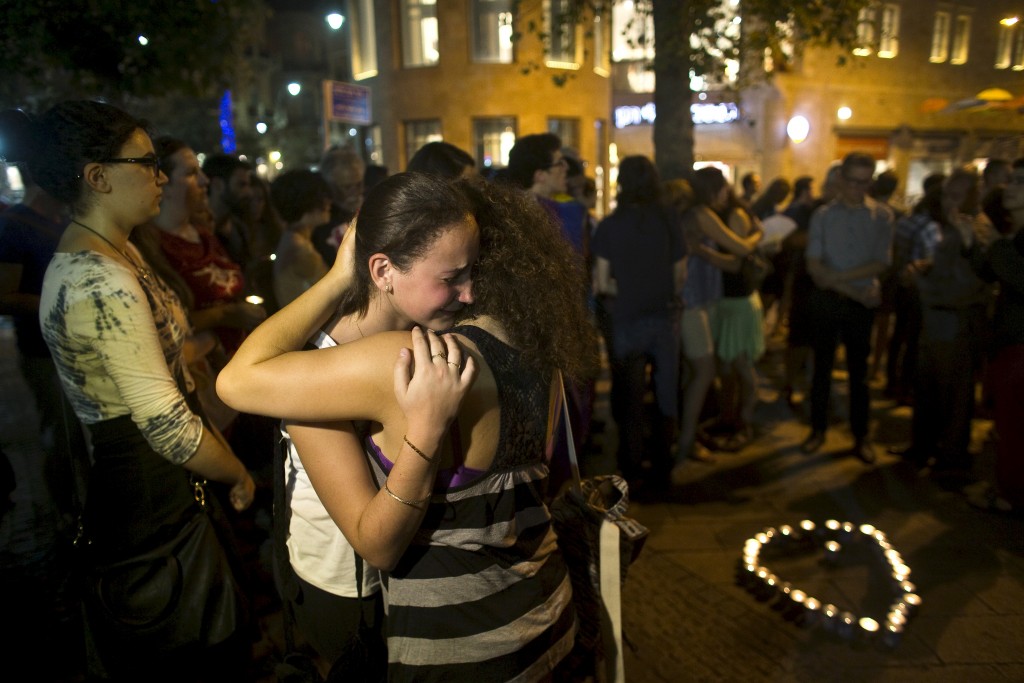 Teenagers comfort each other during a candlelight vigil in Jerusalem for Shira Banki, who died on Sunday of stab wounds sustained when an ultra-Orthodox man with a knife attacked a Gay Pride parade in Jerusalem. Photo by Ronen Zvulun/Reuters

In a recent interview with an ultra-Orthodox radio service, Schlissel said of the upcoming parade: “To protest is an obligation in my opinion, but it is not enough,” adding that the goal must be “to disperse them, even by force,” according to The New York Times.

Schlissel was deemed sane and fit to stand trial for his latest rampage Friday, Haaretz reported.

“Shira was murdered because she courageously supported the principle according to which everyone is entitled to live their lives in dignity and safety,” the statement said. “We will not allow the abhorrent murderer to undermine the fundamental values upon which Israeli society is based. We strongly condemn the attempt to instill hatred and violence in our midst and we will deal with the murderer to the fullest extent of the law.”

On Saturday, thousands of Israelis turned out to protest the knife attack and a West Bank arson attack that killed a baby boy Friday morning.

According to Haaretz, two of those wounded in Thursday’s attack were still hospitalized and in serious condition Sunday, though medical officials said they were improving.

Left: People use candles to spell out the phrase "Thou shalt not kill" in Hebrew at a candlelight vigil for Shira Banki in Tel Aviv, Israel, August 2, 2015. Banki died Sunday of stab wounds sustained when an ultra-Orthodox man attacked a Gay Pride parade in Jerusalem Thursday. Photo by Baz Ratner/Reuters