ROME — Doctors and nurses in Italy’s overwhelmed northern hospitals have welcomed a slight stabilizing in the number of coronavirus infections but fear the virus is still silently spreading in the south two weeks into the West’s most extreme nationwide shutdown.

As the dead in Italy keep piling up, virologists warn that the actual number of Italy’s positive cases is up to five times as high as the official count of 80,539. That means infections will still climb even with Italians ordered to stay home for all but essential activity.

Italy, the epicenter of Europe’s pandemic, has by far the most virus deaths of any nation in the world, a grim tally of 8,165. On Friday, Italy is on track to surpass China in its infection count and have the most cases of any nation behind the U.S.

“It is something devastating,” said the Rev. Mario Carminati, who has turned over a church in the tiny Lombard town of Seriate to host coffins before they are taken by military convoy to be cremated. This week, dozens were lined up in two neat rows down the central aisle, and were immediately replaced by new ones when they were taken away.

“At least the relatives and family know that someone is taking care of them, with a prayer and a benediction before they are taken away,” he said.

Despite the toll, officials have also expressed cautious optimism that the exponential spread of the virus is starting to slow in the hard-hit north, thanks to two weeks of military-enforced stay-at-home orders. For several days this week, new infections and deaths showed signs of slowing down, and emergency rooms weren’t seeing the tsunami of sick that characterized the first weeks of the pandemic following Italy’s first positive test Feb. 20.

“The numbers are still high, but for a few days now the numbers have stopped rising, thank God,” said Dr. Luca Lorini, head of intensive care at the Pope John XXIII hospital in Bergamo, one of the hardest hit of Italy’s public hospitals.

Some 500 medical personnel at the hospital are infected, and Lorini said he has found himself treating colleagues, friends, children of friends and parents of friends in his overwhelmed 88-bed ICU that serves a city of 120,000.

He marvels that he is still standing and wonders if maybe he was infected early on with slight symptoms and developed immunity. Nationwide, at least 33 doctors have died and 6,414 medical personnel have tested positive

“We know it before we go into battle, and we accept it,” Lorini told The Associated Press. 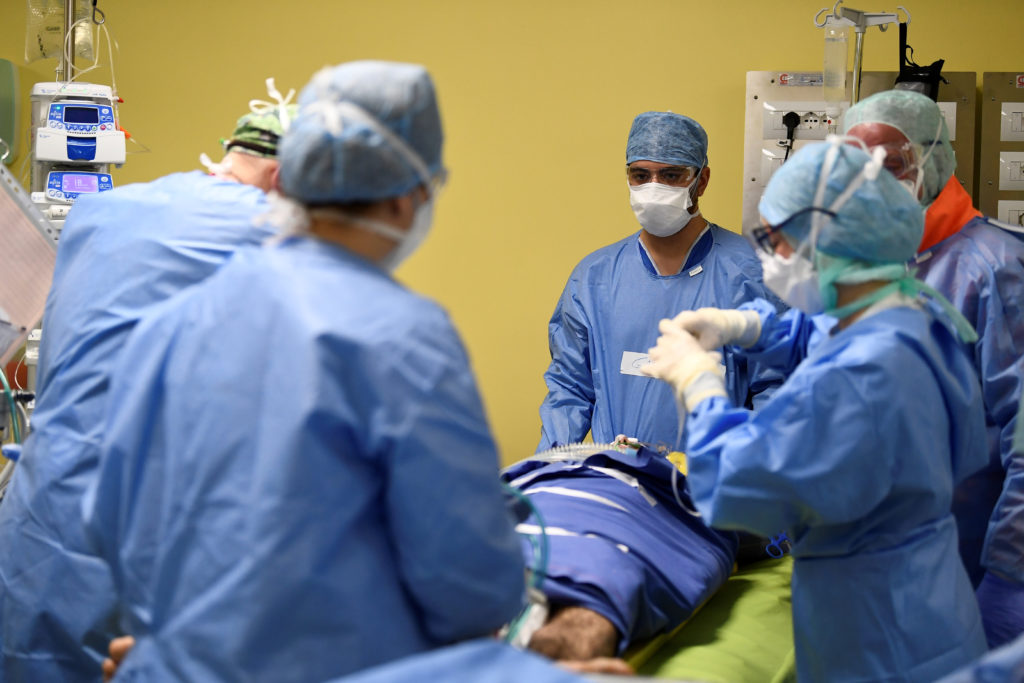 Members of the medical staff in protective suits treat a patient suffering from coronavirus disease (COVID-19) in an intensive care unit at the San Raffaele hospital in Milan, Italy. Photo by Flavio Lo Scalzo/Reuters

Elsewhere in Bergamo, the Italian army’s Alpini mountaineering forces are building a field hospital to be staffed, in part, by some of the 150 medical personnel sent by Russia, one of only a handful of countries along with China and Cuba to respond to Italy’s urgent appeal for medical equipment, protective masks and personnel.

But the need is also growing in the south, where hospitals are even less prepared and equipped than the prosperous north. In one week, Puglia in the “heel” of the Italian peninsula went from 478 cases to 1,182, with a doubling of ICU patients. Campania also doubled its caseload to 1,310 and tripled the number of people in ICUs.

“It’s a matter of hours, not days,” the governor of the Campania region that includes Naples wrote to the central government, complaining that his urgent requests for ventilators had gone unheeded. “There is a real chance of adding a tragedy of the south to the tragedy of the north.”

Cateno De Luca, mayor of the Sicilian city of Messina, took the extraordinary step of recording a warning to residents in his nasal, gravelly voice for drones to play as they fly over the seaside city monitoring residents’ movements.

“Don’t go outside! That is an order from Mayor De Luca!” the drone blasts.

Italy’s high death toll and aggressive spread of the virus has led Italian epidemiologists to estimate that the true number of infected could be as high as 450,000, and that under-testing is putting Italians at risk of further contagion. Currently, Italy only tests people showing symptoms, because its labs cannot process any more, and to date more than 360,000 tests have been performed.

Virologist Dr. Andrea Crisanti, director of molecular medicine at the University of Padua and a consultant for the Veneto regional government, points to the only controlled epidemiological study done in the outbreak, in the tiny Veneto town of Vo’Euganeo, as evidence that Italy’s true numbers of infection are much higher — and that the risk of not testing more widely is enormous.

Italy recorded its first death in Vo, and the town was locked down Feb. 22 and the entire population of 3,300 tested. According to the study, 3% of Vo’s residents were infected, but between 50%-75% of them were asymptomatic. But because all positive cases were identified, isolated and quarantined, regardless of whether they were symptomatic, Vo has seen its new infections crumble.

“This tiny town has taught us a lot,” Crisanti told state-run RAI radio.

Crisanti said the Vo study showed that even asymptomatic people transmit the virus, since the few new infections registered between tests were within households of asymptomatic people. The only way to stop the spread, he told RAI, is more testing, active surveillance of all positive cases and quarantine.

Based on the Vo results, Veneto Gov. Luca Zaia is planning to vastly ramp up testing across the region, aiming to reach 20,000 tests a day and hand out protective masks to each family. Already, Veneto has tested nearly 80,000 people, and compared to hard-hit Lombardy next door, has a comparatively low mortality rate with 287 dead and 6,935 positive cases.

The government on March 10 imposed a nationwide lockdown after an initial quarantine of a dozen small towns in Lombardy and Veneto failed to stop the spread of the virus. On Thursday, Italy idled all non-essential production and industry, the most widespread manufacturing shutdown in the world.

The industrial lobby Confindustria has estimated it could cost $77 billion-$110 billion of national wealth a month if 70% of companies are closed.

Two weeks in, the measures appear to be having their effect on the virus, slowing new infections and relieving pressure on the health system. By Thursday, more than 10,000 of Italy’s 80,000 infected had been cured.

The president of Italy’s National Institutes of Health, Dr. Silvio Brusaferro, said Friday that Italy hadn’t yet reached the peak of its infection curve or begun to see a decline. But he said: “What we have are signs of a slowing that makes us think that we are close.”

Twenty days after coming down with a fever, and after nearly a week in an air-pressurized helmet pumping oxygen into his virus-ravaged lungs, Fausto Russo is now breathing on his own and hopes to go home as early as Sunday from the Santa Maria Goretti hospital in Latina, near Rome.

“It’s a horrible sensation, not being able to breathe,” said Russo, a 38-year-old fitness trainer. “Imagine putting your head under water.”

Lorini, the doctor, knows well the toll that the virus takes on both patients and hospital staff. When he goes home each night, a five-minute walk from the hospital, he allows himself a few minutes to listen to music and “unplug” from the intensity of the ICU ward.

His current favorite song is Bruce Springsteen’s “Secret Garden.” He smiles as he thinks about the lyrics. “You’ve gone a million miles/ How far’d you get/ To that place where/ You can’t remember/ And you can’t forget.”

“Listen to it today,” Lorini suggested. “It will give you a sense of tenderness.”

Italian doctors urge the U.S. to learn from their country’s mistakes