LONDON — British Prime Minister Boris Johnson and opposition Labour Party leader Jeremy Corbyn clashed Friday night in the last head-to-head debate before a general election next week — an underpowered showdown that saw both men stick to well-worn phrases and promises about their plans for Brexit and Britain’s future.

Johnson, a Conservative who supports Britain’s exit from the European Union, tried to portray Corbyn as a waffler with no firm Brexit stance who would plunge the U.K. into more uncertainty. Corbyn reminded viewers about the Conservative government’s spending cuts, and claimed Johnson was bent on striking a trade deal with the United States that might harm Britain’s interests.

Each questioned the other’s character. Johnson accused Corbyn of a “failure of leadership” for failing to stamp out anti-Semitism in his party. Corbyn retorted that “a failure of leadership is when you use racist remarks,” as Johnson has done with glibly offensive language. In a magazine article last year he called Muslim women who wear face-covering veils “letter boxes.” 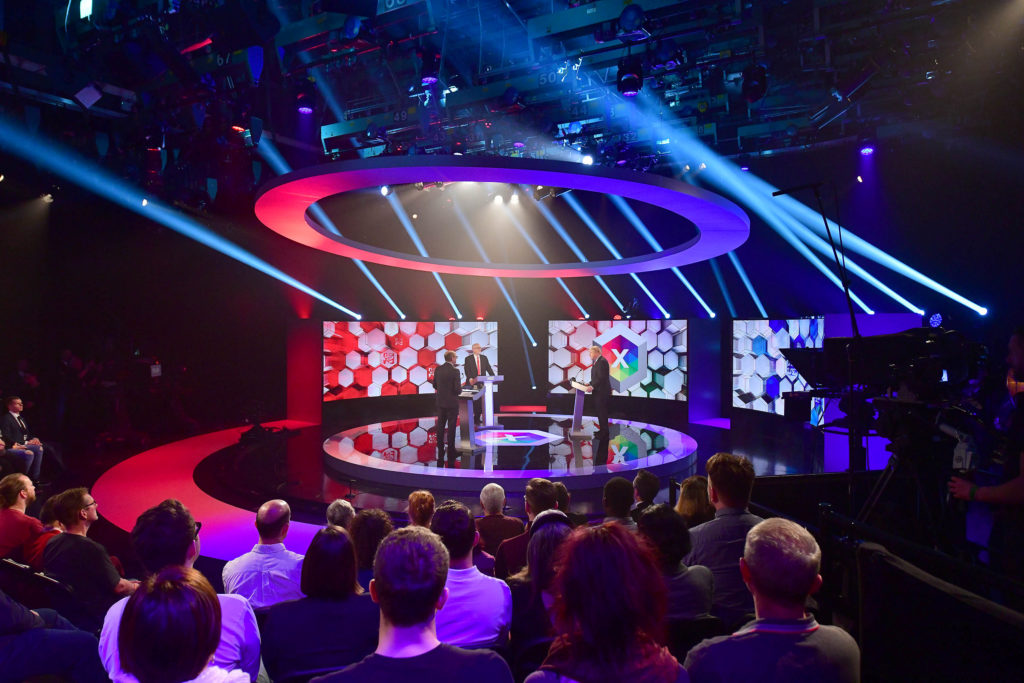 The audience watches as Britain’s Prime Minister Boris Johnson and opposition Labour Party leader Jeremy Corbyn face each other in a head-to-head debate on the BBC in London, Britain December 6, 2019. Photo by Jeff Overs/BBC/Handout via Reuters.

Opinion polls put Johnson’s Conservatives ahead of the Labour opposition before the election next Thursday, in which all 650 House of Commons seats are up for grabs.

The Conservatives had a minority government before the election, and Johnson pushed for the Dec. 12 vote, which is taking place more than two years early, in hopes of winning a majority and breaking Britain’s political impasse over Brexit. He says that if the Conservatives win a majority, he will get Parliament to ratify his Brexit divorce deal and take the U.K. out of the EU by the current Jan. 31 deadline. 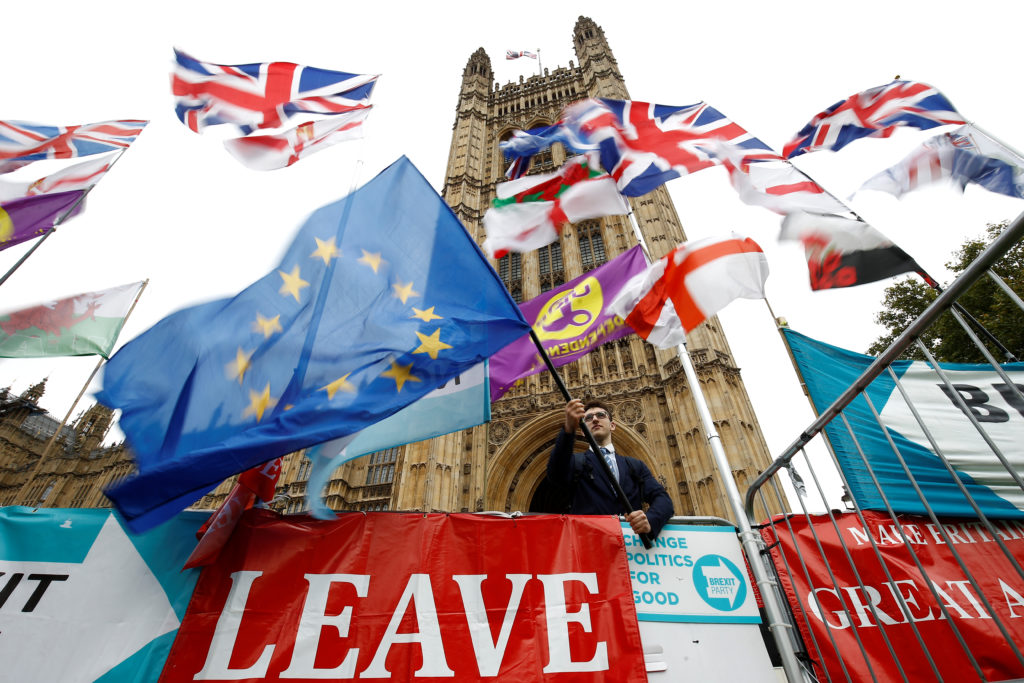 An anti-Brexit protester waves an EU flag outside the Houses of Parliament in London, Britain, October 25, 2019. Photo by Henry Nicholls

In the debate, Johnson contrasted that promise with Corbyn’s refusal to say whether he favored leaving the bloc or remaining. Labour has promised to negotiate a new Brexit deal, then give voters a choice between leaving on those terms and remaining in the bloc. Corbyn says he would be neutral in that referendum.

“You cannot end the uncertainty on Brexit if you do not know what the deal is that you want to do,” Johnson said. “You cannot negotiate a deal if you are neutral on it.”

Johnson’s opponents say his promise to “get Brexit done” rings hollow, because leaving the bloc will be the prelude to months or years of complex trade negotiations.

Corbyn claimed that under a Johnson government, Britain would “walk out of the EU into a relationship with nobody” and spend years trying to strike a new trade deal with the United States. He said that would bring “seven years of complete uncertainty and continued job losses in manufacturing and industry.”

The two men also tussled over security in the wake of last week’s deadly attack in London by a knife-wielding man who had served a prison sentence for terrorist crimes. Johnson tried to portray Corbyn — a longtime anti-war and anti-nuclear campaigner — as soft on security. Corbyn highlighted cuts to police and prison services under the Conservatives.

Johnson’s party is promising to increase public spending if it wins the election, and Corbyn tackled Johnson on inflated promises, such as a claim his government will build 40 news hospitals. In fact that number includes many existing facilities that will be renovated.

Labour also took aim Friday at Johnson’s insistence that there will be no new checks on trade between Northern Ireland and the rest of the U.K. after Brexit. The divorce deal Johnson has negotiated with the bloc agrees to keep Northern Ireland aligned to EU customs rules and some goods standards to avoid checks along the currently invisible border with EU member Ireland.

Trade experts say that means some checks will have to be conducted on goods moving across the Irish Sea between Britain and Northern Ireland. 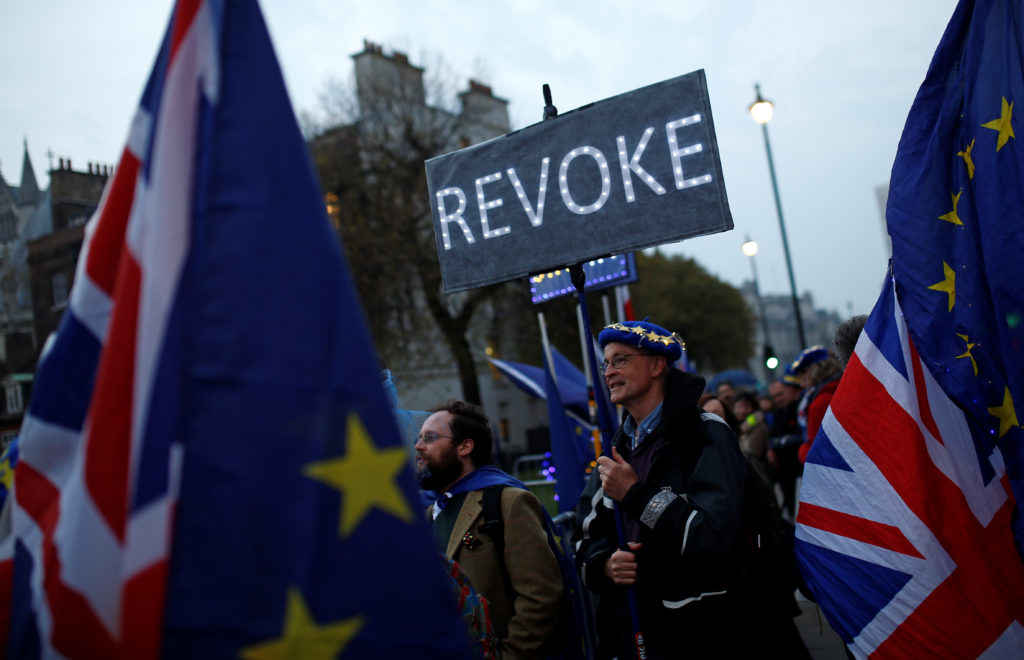 Anti-Brexit protesters are seen outside the Houses of Parliament, in London on April 8, 2019. Photo by Henry Nicholls/ Reuters.

Labour said it had obtained a leaked Treasury document that says “there will be customs declarations and security checks between Northern Ireland and Great Britain,” and Brexit Secretary Stephen Barclay has previously said there will have to be some checks.

Corbyn said the document “drives a coach and horses through Boris Johnson’s claim that there will be no border in the Irish Sea.”

But Johnson claimed it was “nonsense” to suggest there would be any new checks. The Conservative Party said the leaked document was an “immediate assessment” rather than a detailed analysis.

Labour has a radical domestic agenda, promising to nationalize key industries and utilities, hike the minimum wage and give free internet access to all.

The party has struggled to persuade voters that its lavish spending promises are deliverable without big tax hikes. Labour’s campaign also has been dogged by allegations that Corbyn — a long-time champion of the Palestinians — has allowed anti-Jewish prejudice to fester in the left-of-center party.

Corbyn has called anti-Semitism “a poison and an evil in our society” and says he is working to root it out of the party.

This election is especially unpredictable because the question of Brexit cuts across traditional party loyalties. For many voters, their identities as “leavers” or “remainers” are more important than party affiliations. 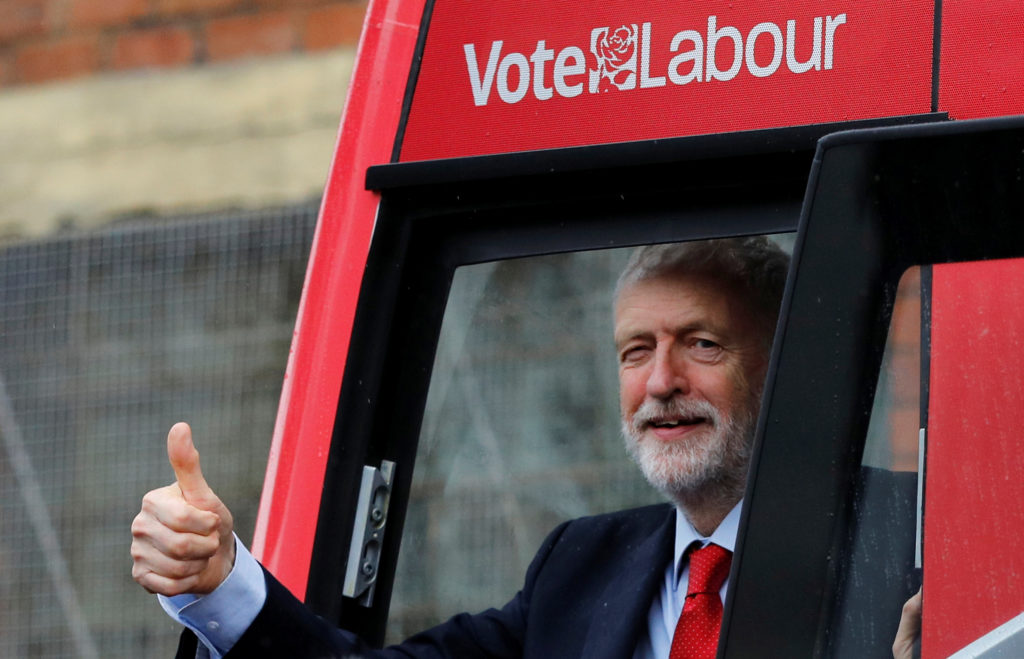 The Conservative lead suggests the party has managed to win over many Brexit-backing voters, while Labour faces competition for pro-EU electors from the centrist Liberal Democrats and several smaller parties.

But the Conservatives have also lost support from some pro-EU voters by taking a strongly pro-Brexit stance. Several ex-Conservative lawmakers who were expelled for rebelling over Brexit are running against their old party as independents.

“It will make our country poorer and weaker,” he said. “It will hurt most those who have least.”

In another blow to Johnson’s claims that Britain will be better off outside the EU, Britain’s Brexit envoy in Washington quitthis week, saying she no longer wants to “peddle half-truths on behalf of a government I do not trust.”

Alexandra Hall Hall resigned as the embassy’s Brexit counselor with a letter slamming the British government’s use of “misleading” arguments and reluctance “to address honestly” the challenges and trade-offs involved in leaving the EU.