Kim open to another summit with Trump, with conditions

PYONGYANG, North Korea — North Korean leader Kim Jong Un said he is open to a third summit with President Donald Trump, but set the year’s end as a deadline for Washington to offer mutually acceptable terms for an agreement to salvage the high-stakes nuclear diplomacy, the North’s state-run media said Saturday.

Kim made the comments during a speech Friday at a session of North Korea’s rubber stamp parliament, which made a slew of personnel changes that bolstered his diplomatic lineup amid stalemated negotiations with the United States. His speech came hours after Trump and visiting South Korean President Moon Jae-in met in Washington and agreed on the importance of nuclear talks with North Korea.

“We of course place importance on resolving problems through dialogue and negotiations. But U.S.-style dialogue of unilaterally pushing its demands doesn’t fit us, and we have no interest in it,” Kim said during the speech.

According to the Korean Central News Agency, or KCNA, Kim blamed the collapse of his summit with Trump in February on what he described as unilateral demands by the United States, which he said raised questions over whether Washington has genuine willingness to improve relations. But Kim said his personal relationship with Trump remains good and that they could exchange letters at “any time.”

Trump responded to the remarks by saying he agreed with Kim about their relationship, and also expressed a desire for another summit.

“I agree with Kim Jong Un of North Korea that our personal relationship remains very good, perhaps the term excellent would be even more accurate, and that a third Summit would be good in that we fully understand where we each stand,” Trump wrote on Twitter.

“North Korea has tremendous potential for … extraordinary growth, economic success and riches under the leadership of Chairman Kim. I look forward to the day, which could be soon, when Nuclear Weapons and Sanctions can be removed, and then watching North Korea become one of the most successful nations of the World!” he tweeted.

In his speech, Kim repeated earlier claims that North Korea’s crippled economy would persevere through heavy international sanctions imposed over its nuclear weapons program and that he wouldn’t “obsess over summitry with the United States out of thirst for sanctions relief.”

The United States has said the summit in Vietnam broke down because of the North’s excessive demands for sanctions relief in return for limited disarmament measures. In their first summit last June in Singapore, Trump and Kim issued a vague statement calling for a nuclear-free Korean Peninsula without describing when or how it would occur.

Kim said the United States has been refusing to withdraw what the North perceives as “hostile policies” while sticking to “mistaken judgment that we would succumb to maximum pressure.” He said the North would not compromise on the “fundamental interests of our country and people, even by a speck,” and blamed the United States for arriving in Hanoi with “completely unrealizable plans.”

“If the United States approaches us with the right manner and offers to hold a third North Korea-U.S. leaders’ summit on the condition of finding solutions we could mutually accept, then we do have a willingness to give it one more try,” Kim added. “We will wait with patience until the end of the year for the United States to come up with a courageous decision. But it will clearly be difficult for a good opportunity like last time to come up.”

Kim also during the speech made a nationalistic call for South Korea to support the North’s positions more strongly and criticized Seoul for acting like an “overstepping mediator” between Washington and Pyongyang. Kim held three summits last year with Moon, who lobbied hard to revive the nuclear talks between the United States and North Korea. Following the collapse of the Trump-Kim summit, the North had been urging the South to break away from Washington and proceed with inter-Korean economic projects that are currently held back by U.S.-led sanctions against the North.

“The South should not act as an ‘overstepping mediator’ or a ‘facilitator’ and should rather get its mind straight as a member of the (Korean) nation and boldly speak up for the interest of the nation,” Kim said. 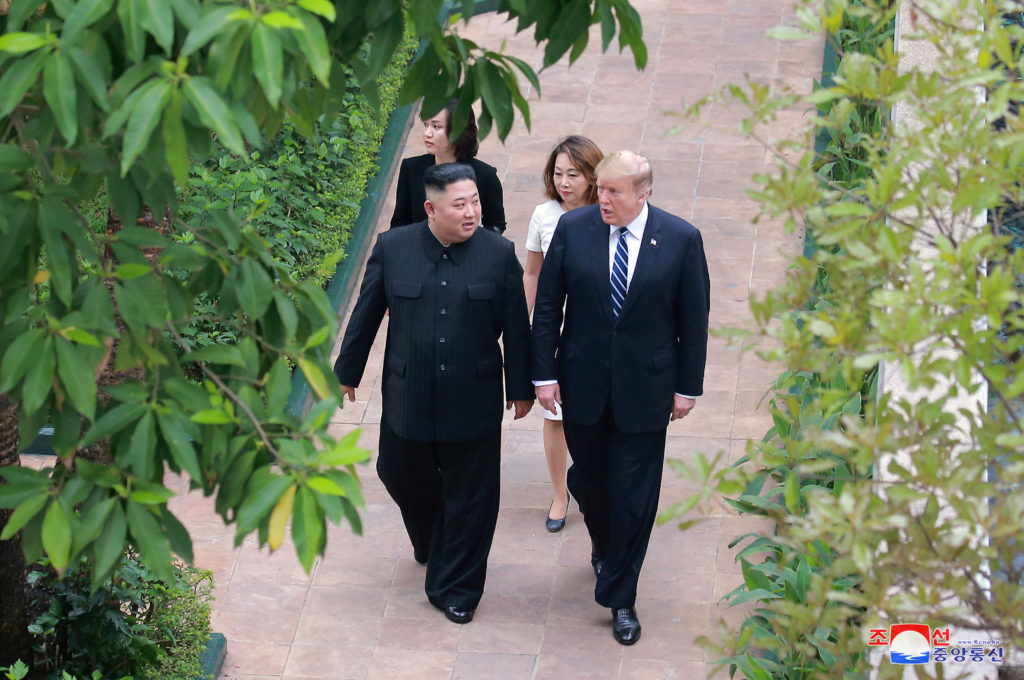 When asked about Kim’s comments, South Korea’s presidential office said Seoul is committed toward keeping the atmosphere of dialogue alive and helping negotiations between Washington and Pyongyang resume at an early date.

On Friday, KCNA reported that Kim was reelected as chairman of the State Affairs Commission, the nation’s most important decision-making body, during a session of the Supreme People’s Assembly that praised his “outstanding ideological and theoretical wisdom and experienced and seasoned leadership.”

Experts say the new appointments may be a sign of Kim’s desire to keep recent months of up-and-down nuclear diplomacy alive rather than returning to the threats and weapons tests that characterized 2017, when many feared war on the Korean Peninsula.

But the lack of substantial disarmament commitments from the North and the deepening impasse in nuclear negotiations have fueled doubts over whether Kim would ever voluntarily relinquish an arsenal he may see as his strongest guarantee of survival.

Some experts say it’s becoming clear the North intends to turn the talks with the United States into a bilateral arms reduction negotiation between two nuclear states, rather than a unilateral process of surrendering its arsenal.

Kim has signed vague statements calling for the “complete denuclearization” of the peninsula in his meetings with Trump and Moon. But North Korea for decades has been pushing a concept of denuclearization that bears no resemblance to the American definition, with Pyongyang vowing to pursue nuclear development until the United States removes its troops and the nuclear umbrella defending South Korea and Japan.