AKCAKALE, Turkey — Kurdish fighters and civilians began evacuating from a besieged Syrian town on Sunday, the first pullback under the U.S.-brokered cease-fire deal, opening the way to a broader withdrawal of the Kurdish-led forces from parts of the Turkish border.

The evacuation is a boost to a cease-fire that has been shaky since it began on Thursday evening. Clashes have erupted daily, with occasional shelling, particularly around Ras al-Ayn, the border town where Kurdish fighters have been encircled by Turkish-led forces.

A local official in Ras al-Ayn told the Associated Press that Kurdish fighters and civilians had begun leaving in convoys. He said it was unsure if it would be completed Sunday. The official spoke on condition of anonymity because he was not authorized to talk about the process.

The cease-fire deal only calls for fighters to leave the border area. But Kurdish civilians flee as well because without their protection they fear atrocities by the Turkish-backed Syrian forces. Those fighters, who are Arab and often Islamist extremists, have been accused of killings of Kurdish civilians and captured fighters during this campaign and in other Syrian territory seized in Turkish campaigns since 2017.

A senior official in the Kurdish-led Syrian Democratic Forces, Redur Khalil, said that after the Ras al-Ayn evacuation, the forces will withdraw from a zone about 120 kilometers (75 miles) wide and 30-kilometers (20 miles) deep between Ras al-Ayn and the town of Tel Abyad further west. 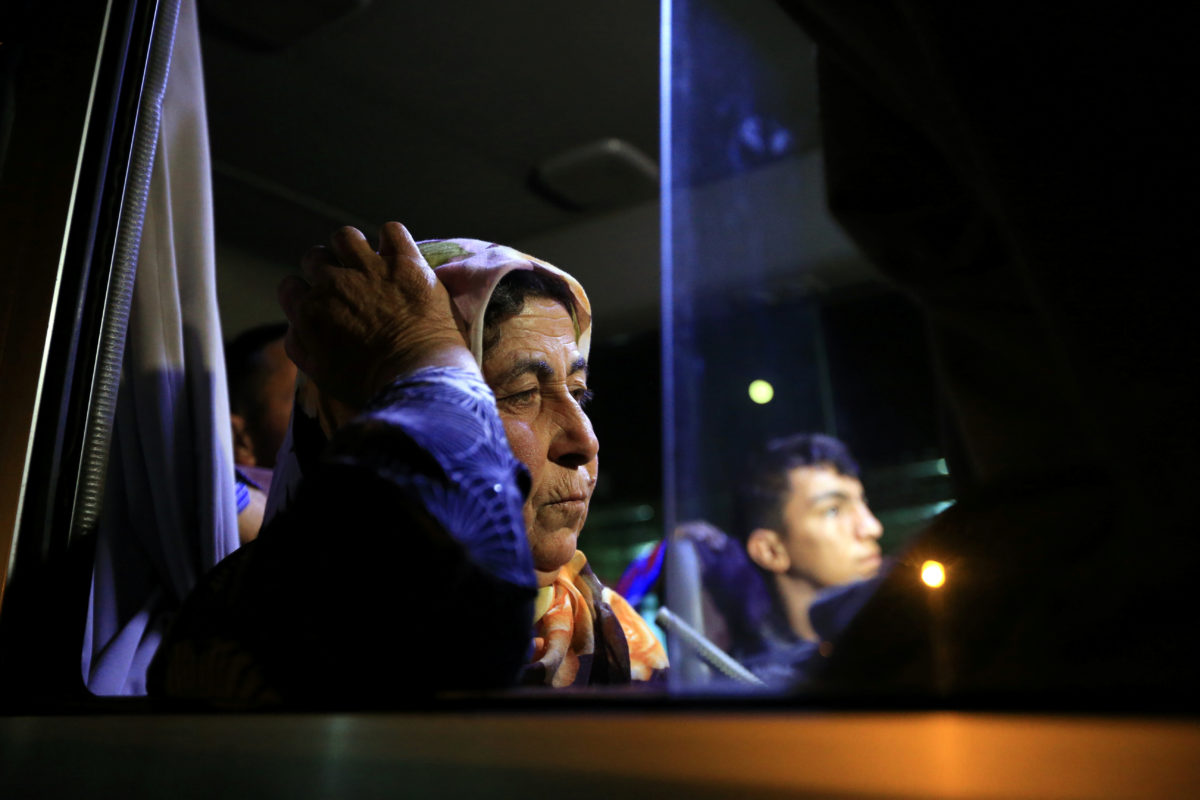 A Syrian displaced woman, who fled violence after the Turkish offensive against Syria, is seen sitting in a bus after arrival at a refugee camp in Bardarash on the outskirts of Dohuk, Iraq October 17, 2019. Photo by Ari Jalal/Reuters.

Under the accord, that pullback is supposed to be completed by Tuesday evening when the cease-fire — or pause in fighting, as Turkey calls it — runs out.

The Trump administration negotiated the accord after heavy criticism at home and abroad that it had opened the way for the Turkish invasion by abruptly removing its soldiers from northeast Syria . That move abandoned the Kurdish-led force, which had allied with the Americans to fight the bloody, years-long campaign that brought down the Islamic State group’s rule over nearly a third of Syria.

Khalil told the AP that the SDF had reached understandings with the Americans to leave the town from the start of the cease-fire but the siege delayed the plans for days. Turkish officials have denied they were preventing the withdrawal of any fighters.

In daily gun battles, Kurdish fighters holed in up in a hospital on the town’s southern edge and nearby neighborhoods traded fire with the Turkish-backed forces. The SDF said 16 of its fighters had been killed and three wounded the past 24 hours

Both sides accuse each other of repeatedly violating the three-day old cease-fire. Turkey’s Defense Ministry said one of tis soldiers was killed Sunday in a Kurdish attack with anti-tank weapons and small arms fire near the border town of Tal Abyad.

That brought the Turkish military’s death toll to seven soldiers since it launched its offensive on Oct. 9.

On Saturday, medical convoys were able to enter Ras al-Ayn for the first time, delivering medical supplies and bringing out 30 wounded and four dead.

The broader Kurdish pullback, if it is carried out, will grant Turkish forces control of the swathe of territory roughly in the middle of the Syrian-Turkish border. The area has been the main theater of fighting during the offensive, causing the flight of tens of thousands of civilians — Arab and Kurd — from the villages that dot the landscape. At least 160,000 civilians have been displaced by the Turkish assault.

Significant issues remain over the arrangements at the border.

A previous agreement between the U.S. and Turkey over a “safe zone” along the Syria-Turkish border foundered over the diverging definitions of the area.

Erdogan has said the Kurdish fighters must withdraw from a far larger length of the border — from the Euphrates River to the Iraqi border, more than 440 kilometers (260 miles) — or else the Turkish offensive will resume Tuesday.

U.S. officials say the agreement pertains to the 120-kilometer section. Erdogan’s spokesman, Kalin, confirmed that is the area affected by the pause in fighting, but said Turkey still wants the larger zone.

Turkey considers the Kurdish-led fighters as terrorists because of their links to a Kurdish insurgent group inside Turkey. It says any presence of the group along its borders is an existential threat. Turkey also wants to resettle some of the 3.6 million Syrian refugees on its soil in the border “safe zone.”

Another question is what the arrangement will be along the rest of the northeastern border, from the Euphrates River to the Iraqi border, most of which remains solely in the hands of Kurdish-led fighters.

When they were abandoned by U.S. troops, the Kurds turned to Russia and secured an agreement for Syrian government forces to deploy in the northeast last week.

So far, the Syrian forces have only moved into one location directly on the border, the town of Kobani, and a few positions further south.

Erdogan is to meet Russian President Vladimir Putin in the Russian town of Sochi on Tuesday. His spokesman Kalin said he will tell Putin that Ankara does not want either Syrian forces or Kurdish fighters along the border because refugees would not go back to areas under their control.

“We want to create conditions that will be suitable for them to return where they will feel safe.”

Left: Members of PKK, listed as a terrorist organization by Turkey, the U.S. and the EU, and Syrian Kurdish YPG militia, which Turkey regards as a terror group, withdraw from Ras al-Ayn, Syria on October 20, 2019 with their own vehicles and ambulances of The Red Cross after Turkey and U.S. reached an agreement to pause its Operation Peace Spring for 120 hours to allow the withdrawal of PKK and YPG forces from the planned safe zone. Photo by Huseyin Nasir/Anadolu Agency via Getty Images