SREBRENICA, Bosnia-Herzegovina — Virtually joined by world leaders, the survivors of Bosnia’s 1995 Srebrenica massacre on Saturday remembered the victims of Europe’s only acknowledged genocide since World War II and warned of the perpetrators’ persistent refusal to fully acknowledge their responsibility.

Speaking at a commemoration ceremony for the thousands of massacre victims, held in the memorial center and cemetery just outside Srebrenica, a top Bosnian official warned that the extent of the 1995 slaughter is still being systematically denied despite irrefutable evidence of what happened.

“I am calling on our friends from around the world to show, not just with words but also with actions, that they will not accept the denial of genocide and celebration of its perpetrators,” said Sefik Dzaferovic, the Bosnian Muslim member of the country’s tripartite presidency.

“The Srebrenica genocide is being denied (by Serb leaders) just as systematically and meticulously as it was executed in 1995 … we owe it not just to Srebrenica, but to humanity, to oppose that,” he added. 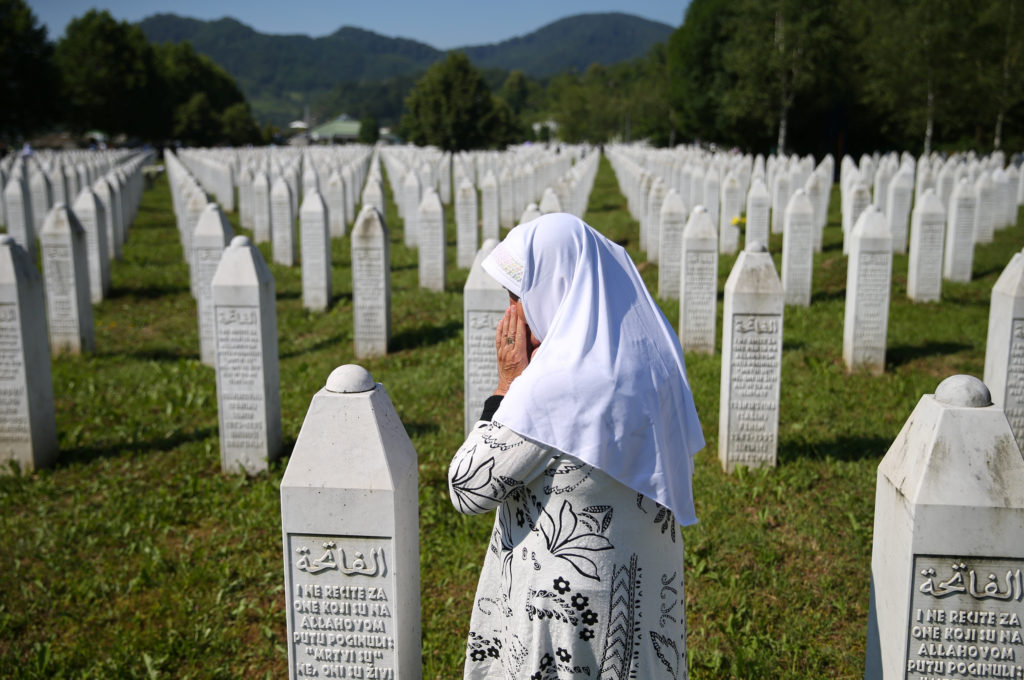 A woman prays at a graveyard, ahead of a mass funeral in Potocari near Srebrenica, Bosnia and Herzegovina July 11, 2020. Bosnia marks the 25th anniversary of the massacre of more than 8,000 Bosnian Muslim men and boys, with many relatives unable to attend due to the coronavirus disease (COVID-19) outbreak. REUTERS/Dado Ruvic

In July 1995, at least 8,000 mostly Muslim men and boys were separated by Serb troops from their wives, mothers and sisters, chased through woods around Srebrenica and killed by those forces in what is considered the worst massacre on European soil since the Third Reich.

The killing spree was the most brutal episode of the 1992-95 war in Bosnia, which began after the break-up of Yugoslavia. More than 100,000 people, an overwhelming majority of them Bosnian Muslim civilians, were killed in the war between Bosnian Serbs, Croats and Muslims before a peace deal was brokered in 1995.

After murdering their victims in Srebrenica a quarter of a century ago, Bosnian Serb soldiers dumped their bodies in numerous mass graves scattered around the eastern town in an attempt to hide the evidence of the crime.

Thanks to an international forensic effort, body parts are still being found in death pits, put together and identified through DNA analysis. Close to 7,000 of those killed have already been found and identified.

Newly identified victims are reburied each year on July 11 — the anniversary of the day the killing began in 1995 — in the vast and still expanding memorial cemetery outside Srebrenica. On Saturday, 9 newly identified men and boys were laid to rest there.

What took place in Srebrenica was a mark of shame for the international community because the town had been declared a U.N. “safe haven” for civilians in 1993. But two years later, the outnumbered, outgunned U.N. peacekeepers could only watch as the Bosnian Serb troops separated the town’s men and boys for execution, bussing the women and girls to Bosnian government-held territory. 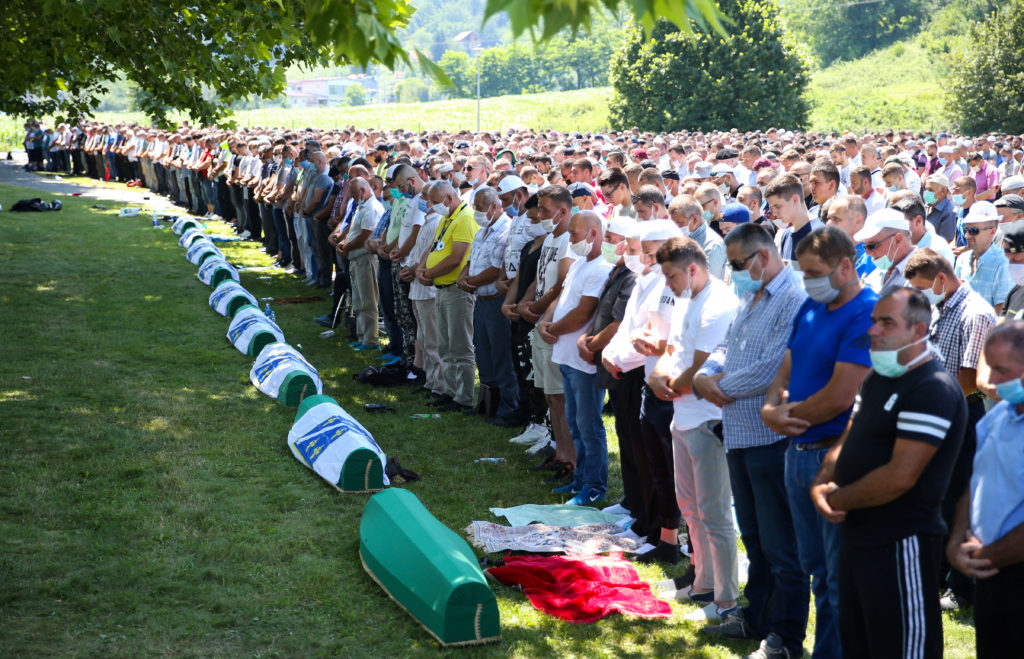 People pray near coffins at a graveyard during a mass funeral in Potocari near Srebrenica, Bosnia and Herzegovina July 11, 2020. Bosnia marks the 25th anniversary of the massacre of more than 8,000 Bosnian Muslim men and boys, with many relatives unable to attend due to the coronavirus disease (COVID-19) outbreak. REUTERS/Dado Ruvic

Some international speakers also addressed the continued refusal by Serb leaders in Bosnia and neighboring Serbia to acknowledge the extent of the Srebrenica slaughter and the ongoing suffering of its survivors.

Judge Carmel Agius, president of the U.N. court that is completing war crimes trials stemming from the breakup of Yugoslavia, warned in his video message that the victims of the Srebrenica massacre “continue to be tormented by those who attempt to deny their lived experiences, and, thereby, their very existence.”

“I want to join with you once more in mourning the victims of those terrible events, and to stand with the families in their fight for justice,” Johnson said in his video message. “There are those who would prefer to forget or deny the enormity of what took place (in Srebrenica in 1995). We must not allow that to happen.”

Bosnian Serb wartime political leader, Radovan Karadzic and his military commander Ratko Mladic were both convicted of and sentenced for genocide in Srebrenica by a special U.N. war crimes tribunal in The Hague. In all, the tribunal and courts in the Balkans have sentenced close to 50 Bosnian Serb wartime officials to more than 700 years in prison for the Srebrenica killings.

Bosnian Serbs, however, still celebrate Karadzic and Mladic as heroes. Some were even staging celebrations of “the 1995 liberation of Srebrenica” on the anniversary of the crime.

In fact, Bosnian Serb political leaders have consistently prevented the country from adopting a law that would ban genocide denial, with the Serb member of Bosnia’s presidency, Milorad Dodik, even publicly describing the Srebrenica slaughter as a “fabricated myth.”

Left: Women cry next to a coffin of their family member during a mass funeral in Potocari near Srebrenica, Bosnia and Herzegovina July 11, 2020. Bosnia marks the 25th anniversary of the massacre of more than 8,000 Bosnian Muslim men and boys, with many relatives unable to attend due to the coronavirus disease (COVID-19) outbreak. REUTERS/Dado Ruvic