BEIRUT — Riot police fired tear gas and sprayed water cannon near parliament in Lebanon’s capital Saturday to disperse thousands of protesters after riots broke out during a march against the ruling elite amid a severe economic crisis.

The riots began when some protesters started throwing stones at police deployed near the parliament building while others removed street signs and metal barriers and hurled them at security forces. Protesters also threw firecrackers at police.

As rioting took place in central Beirut, thousands of other protesters arrived later from three different parts of the city to join the demonstration.

The Lebanese Red Cross said it took 30 people to hospitals, while 45 others were treated on the spot.

Lebanon has witnessed three months of protests against the political elites who have ruled the country since the end of the 1975-90 civil war. The protesters blame politicians for widespread corruption and mismanagement in a country that has accumulated one of the largest debt ratios in the world. 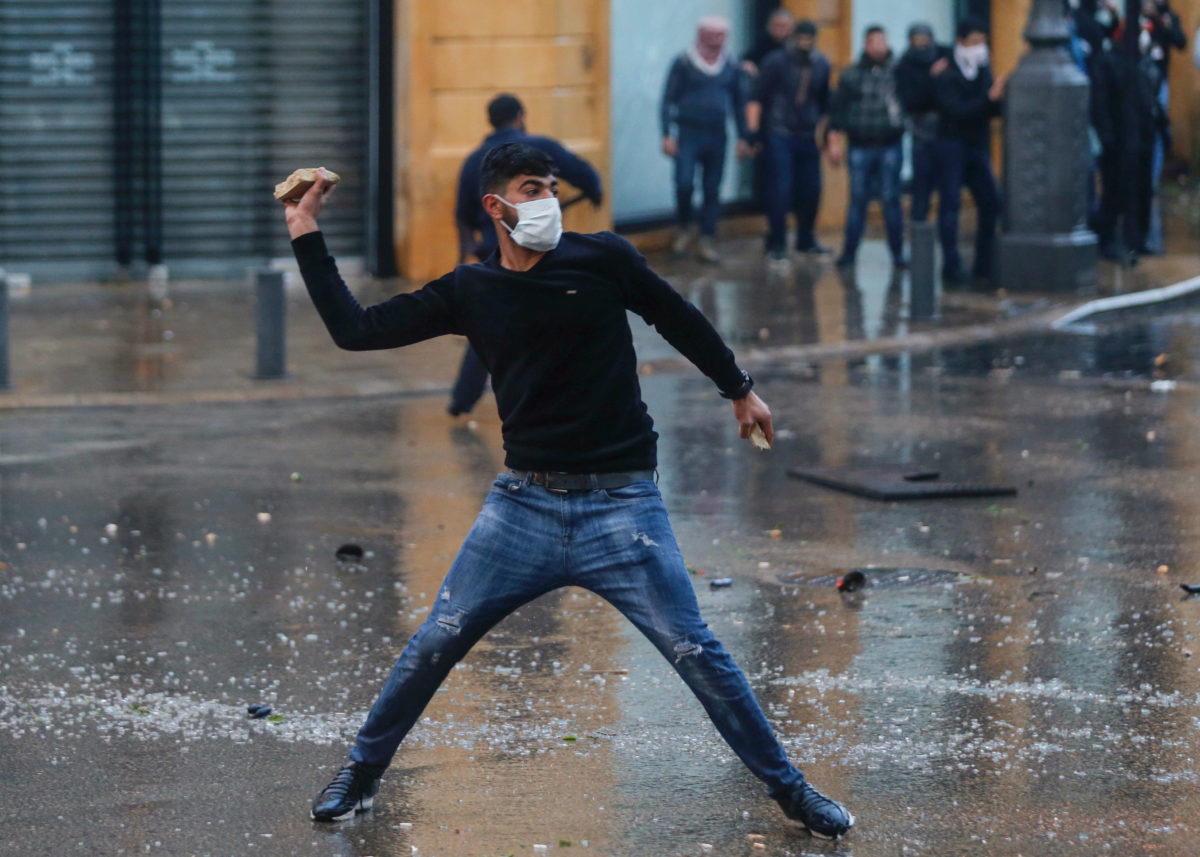 A demonstrator throws a stone during a protest against a ruling elite accused of steering Lebanon towards economic crisis in Beirut, Lebanon January 18, 2020. Photo by Mohamed Azakir/Reuters.

The protesters had called for a demonstration Saturday afternoon with the theme “we will not pay the price” in reference to debt that stands at about $87 billion, or more than 150% of GDP.

Panic and anger gripped the public as they watched their local currency, pegged to the dollar for more than two decades, plummet, losing more than 60% of its value in recent weeks on the black market. The economy has seen no growth and foreign inflows dried up in the already heavily indebted country that relies on imports for most of its basic goods.

Earlier this week, protesters carried out acts of vandalism in a main commercial area in Beirut targeting mostly private banks.

Adding to the crisis, Lebanon has been without a government since Prime Minister Saad Hariri resigned Oct. 29, meeting a key demand of the protesters.

Prime Minister-designate Hassan Diab had been expected to announce an 18-member Cabinet on Friday, but last minute disputes among political factions scuttled his latest attempt.

Left: Demonstrators are hit by water canon during a protest against a ruling elite accused of steering Lebanon towards economic crisis in Beirut, Lebanon January 18, 2020. Photo by Mohamed Azakir/Reuters.