KYIV, Ukraine (AP) — Four months of war in Ukraine appear to be straining the morale of troops on both sides, prompting desertions and rebellion against officers’ orders, British defense officials said Sunday. NATO’s chief warned the fighting could drag on for “years.”

“Combat units from both sides are committed to intense combat in the Donbas and are likely experiencing variable morale,” Britain’s defense ministry said in its daily assessment of the war.

It said “cases of whole Russian units refusing orders and armed stand-offs between officers and their troops continue to occur.”

Separately, the Ukrainian Main Intelligence Directorate released what it said were intercepted phone calls in which Russian soldiers complained about front-line conditions, poor equipment, and overall lack of personnel, according to a report by the Institute for the Study of War.

In an interview published on Sunday in the German weekly Bild am Sonntag, NATO Secretary-General Jens Stoltenberg said that “nobody knows” how long the war could last. “We need to be prepared for it to last for years,” he said.

He also urged allies ”not to weaken support for Ukraine, even if the costs are high, not only in terms of military aid, but also because of the increase in energy and food goods prices.” 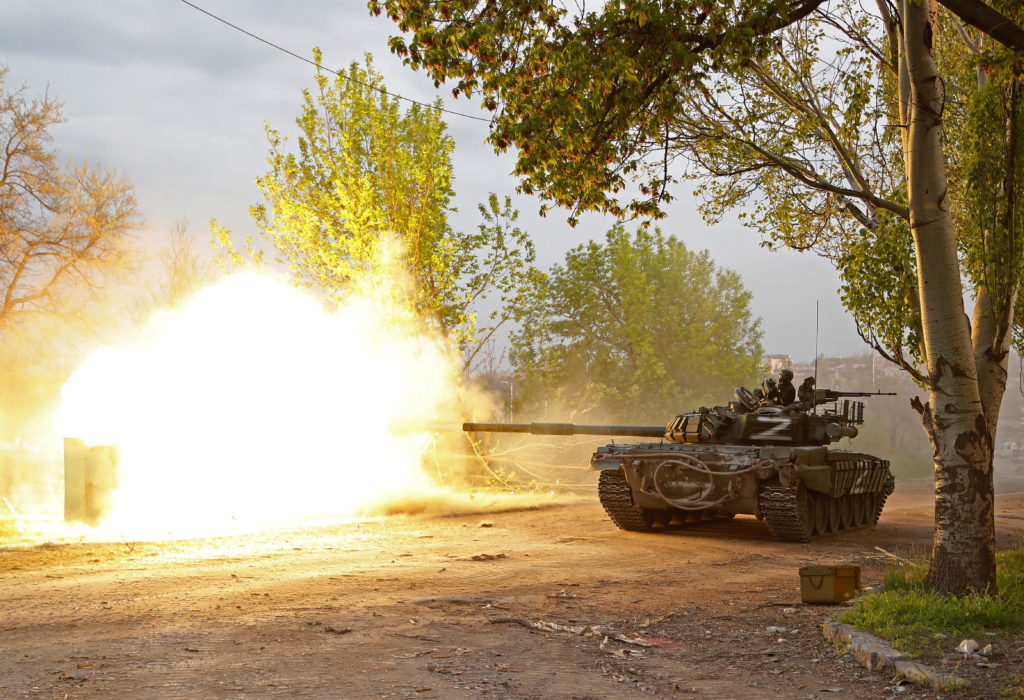 Service members of pro-Russian troops fire from a tank during fighting in Ukraine-Russia conflict near the Azovstal steel plant in the southern port city of Mariupol, Ukraine. May 5, 2022. Photo by Alexander Ermochenko/Reuters.

In recent days, Gazprom, the Russian gas company, has reduced supplies to two major European clients — Germany and Italy. In Italy’s case, energy officials are expected to huddle this week about the situation. The head of Italian energy giant ENI said on Saturday that with additional gas purchased from other sources, Italy should make it through the coming winter, but he warned Italians that “restrictions” affecting gas use might be necessary.

Germany will limit the use of gas for electricity production amid concerns about possible shortages caused by a reduction in supplies from Russia, the country’s economy minister said on Sunday. Germany has been trying to fill its gas storage facilities to capacity ahead of the cold winter months.

Economy Minister Robert Habeck said that Germany will try to compensate for the move by increasing the burning of coal, a more polluting fossil fuel. “That’s bitter, but it’s simply necessary in this situation to lower gas usage,” he said.

Stoltenberg stressed, though, that “the costs of food and fuel are nothing compared with those paid daily by the Ukrainians on the front line.”

Stoltenberg added: What’s more, if Russian President Vladimir Putin should reach his objectives in Ukraine, like when he annexed Crimea in 2014, “we would have to pay an even greater price.”

Britain’s defense ministry said that both Russia and Ukraine have continued to conduct heavy artillery bombardments on axes to the north, east and south of the Sievierodonetsk pocket, but with little change in the front line.

Luhansk governor Serhiy Haidai said via Telegram on Sunday: “It is a very difficult situation in Sievierodonetsk, where the enemy in the middle of the city is conducting round-the-clock aerial reconnaissance with drones, adjusting fire, quickly adjusting to our changes.” 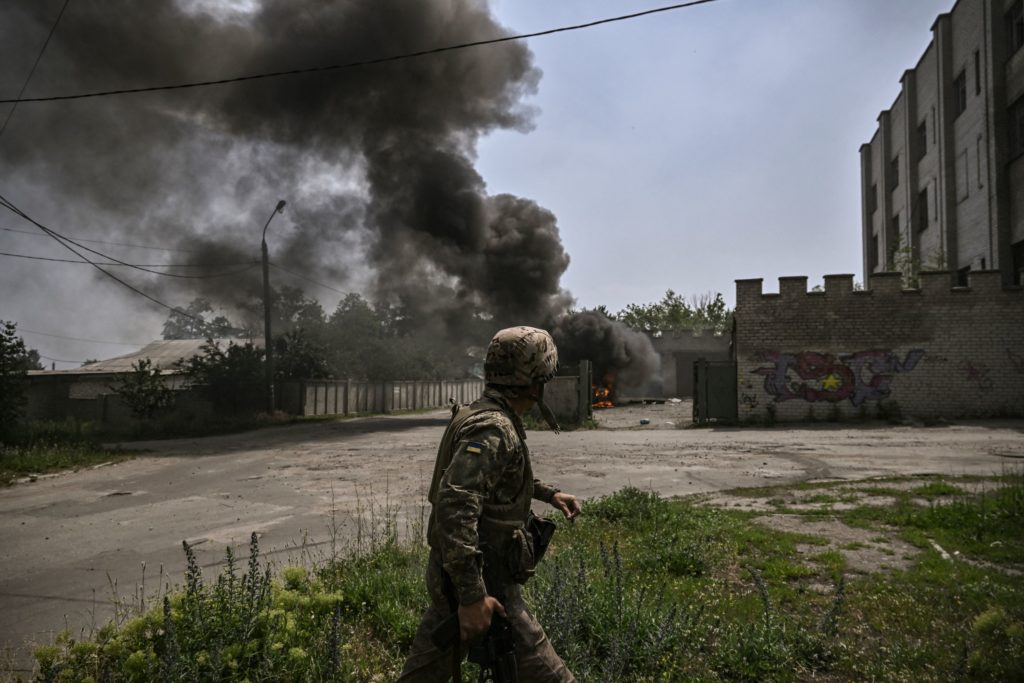 A Ukrainian serviceman walks in front of a burning vehicle during an artillery duel between Ukrainian and Russian troops in the city of Lysychansk, eastern Ukrainian region of Donbas, on June 11, 2022. (Photo by ARIS MESSINIS/AFP via Getty Images)

Russia’s defense ministry claimed on Sunday that Russian and separatist forces have taken control of Metolkine, a settlement just to the east of Sievierodonetsk.

Bakhmut, a city in the Donbas, is 55 kilometers (33 miles) southwest of the twin cities of Lysyhansk and Siervierodonetsk, where fierce military clashes have been raging. Every day, Russian artillery pummels Bakhmut.

But Bakhmut’s people try to go about their daily lives, including shopping in markets that have opened again in recent weeks.

“In principle, it can be calm in the morning,” said one resident, Oleg Drobelnnikov. ”The shelling starts at about 7 or 8 in the evening.” Still, he said, it has been pretty calm in the last 10 days or so.

“You can buy food at small farmer markets,” said Drobelnnikov, a teacher. ”It is not a problem. In principle, educational institutions, like schools or kindergartens, are not working due to the situation. The institutions moved to other regions. There is no work here.”

Ukraine’s east has been the main focus of Russia’s attacks for more than two months.

On Saturday, Ukrainian President Volodymyr Zelenskyy made a trip south from Kyiv to visit troops and hospital workers in the Mykolaiv and Odesa regions along the Black Sea. He handed out awards to dozens of people at every stop, shaking their hands and thanking them again and again for their service.

Zelenskyy, in a recorded address aboard a train back to Kyiv, vowed to defend the country’s south.

“We will not give away the south to anyone, we will return everything that’s ours and the sea will be Ukrainian and safe.”

He added: “Russia does not have as many missiles as our people have a desire to live.” 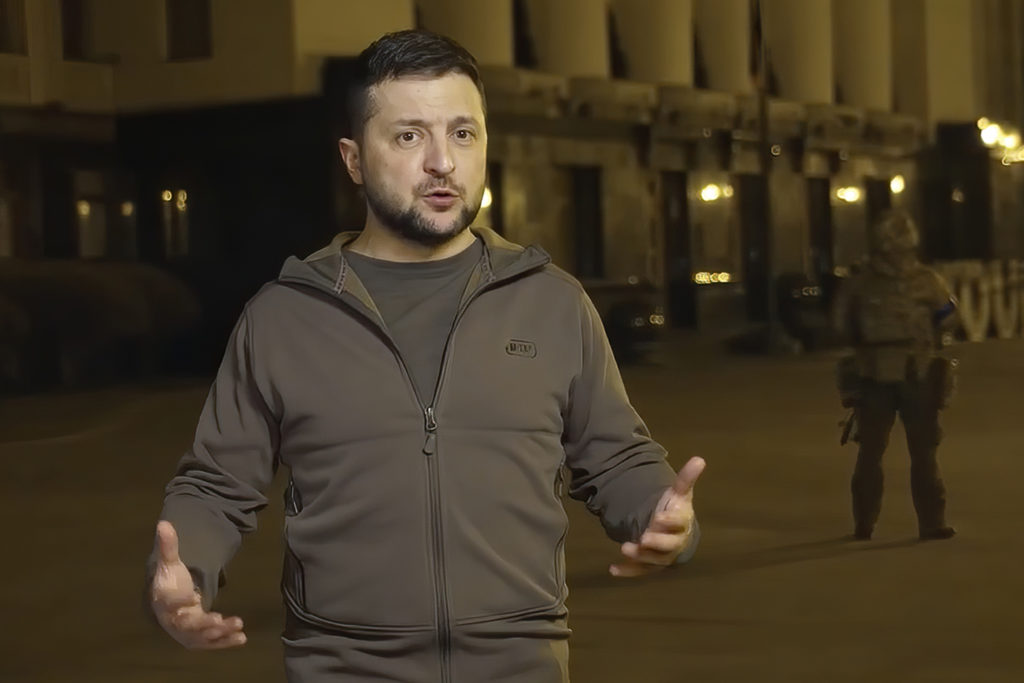 Zelenskyy also condemned the Russian blockade of Ukraine’s ports amid weeks of inconclusive negotiations on safe corridors so millions of tons of siloed grain can be shipped out before the approaching new harvest season.

In other attacks in the south, Ukraine’s southern military operational command said Sunday that two people were killed in shelling of the Galitsyn community in the Mykolaiv region and that shelling of the Bashtansky district is continuing.

British Prime Minister Boris Johnson has expressed concerns “that a bit of Ukraine fatigue is starting to set in around the world.”

“It would be a catastrophe if Putin won. He’d love nothing more than to say, ‘Let’s freeze this conflict, let’s have a cease-fire,'” Johnson said on Saturday, a day after a surprise visit to Kyiv, where he met with Zelenskyy and offered offer continued aid and military training.

Western-supplied heavy weapons are reaching front lines. But Ukraine’s leaders have insisted for weeks that they need more arms and they need them sooner.

Sylvia Hui in London, Frank Jordans in Berlin, Frances D’Emilio in Rome, and Srdjan Nedeljkovic in Bakhmut, Ukraine, contributed to this report.

Left: A man reacts during the funeral ceremony of Roman Ratyshnyi, a Ukrainian public activist and service member, who was recently killed in a battle against Russian troops, as Russia's attack on Ukraine continues, in Kyiv, Ukraine June 18, 2022. Photo by Valentyn Ogirenko/Reuters.