CHRISTCHURCH, New Zealand — The man accused of the New Zealand mosque attacks smirked as his lawyer entered not guilty pleas to terrorism, murder and attempted murder charges Friday before a judge who set his trial for next May.

The courtroom was filled with 80 survivors and family members of the 51 who were slain, while about another 60 watched the hearing on video in an overflow room at the Christchurch High Court. Four cultural advisers and other staff were assigned to help the victims and family members understand the proceedings and the next steps in the case.

A man who addressed the survivors said they had been praying during the holy month of Ramadan and that the Muslim community would help and support each other during the coming weeks and months.

Brenton Tarrant, the 28-year-old Australian accused of the attacks, appeared at the hearing via video link from a small room at the maximum security prison in Auckland where he’s being held. The link was muted and he didn’t attempt to speak.

Other than smirking a couple of times, Tarrant showed little emotion during the hearing. When Judge Cameron Mander asked if he could hear and see what was going on in the courtroom, Tarrant nodded. At times he looked around the room and stretched his neck.

The findings of two mental-health assessments showed Tarrant had no issues related to his ability to enter pleas and stand trial.

The judge did not allow cameras or video in the courtroom although did approve a sketch artist commissioned by The Associated Press.

Tarrant has been charged with 51 counts of murder, 40 counts of attempted murder and one terrorism charge in relation to the March 15 shootings.

Mander said the findings of two mental-health assessments showed Tarrant had no issues related to his ability to enter pleas and stand trial. The assessments are standard in murder cases.

The judge scheduled a six-week trial to begin May 4. Tarrant will remain in custody ahead of his next hearing in mid-August.

Outside the court, police and court security staff escorted a man away after he got into an argument with survivors and family members, who later said the man was saying things supportive of white supremacist ideology.

Police said they arrested a 33-year-old man and charged him with disorderly behavior.

Janna Ezat wore a shirt that she’d designed which featured an image of her son Hussein Al-Umari, who was killed in the attacks. She said the court hearing had made her angry.

“Before I was OK and calm and believe in this life my son died and he is in a good place,” she said. “But when I saw the terrorist, he was just, he’s nothing. Just sitting like that. Pretending that he’s innocent and nothing is wrong.”

She said she thought the shooter deserved to be given the death penalty, even though New Zealand no longer institutes the punishment. 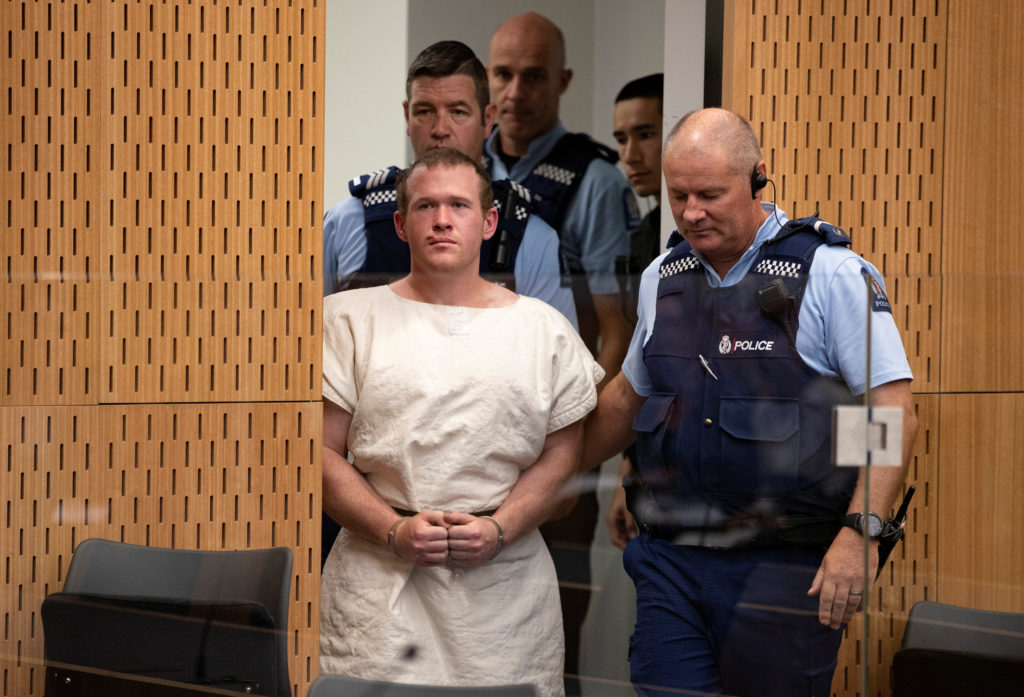 FILE PHOTO: Brenton Tarrant, charged for murder in relation to the mosque attacks, is seen in the dock during his appearance in the Christchurch District Court, New Zealand March 16, 2019. Mark Mitchell/New Zealand Herald/Pool via REUTERS/File Photo

Abdul Aziz, who is considered a hero for confronting the gunman at the Linwood mosque, said he wouldn’t say the suspect’s name.

“He’s a coward. And behind the cell he’s laughing,” Aziz said. “He should have laughed when I faced him. Then I would see how he laugh. He run like a dog. He run like a chicken.”

The shooter livestreamed much of the attack on Facebook.

Tarrant had earlier published a 74-page manifesto espousing a white supremacist philosophy and detailing his plans to attack the mosques.