Paris authorities barricaded the presidential palace and deployed 6,000 police as activists – many in yellow vests representing France’s year-old movement for economic justice – gathered in the capital in a mass outpouring of anger at President Emmanuel Macron and his centerpiece reform.

Unions and their supporters fear that the changes to how and when workers can retire will threaten the hard-fought French way of life. Macron himself remained “calm and determined” to push it through, according to a top presidential official.

The Louvre Museum warned of strike disruptions, and subway stations across Paris shut their gates. Many visitors – including the U.S. energy secretary – canceled plans to travel to one of the world’s most-visited countries amid the strike.

Some travelers showed support for the striking workers, but others complained about being embroiled in someone else’s fight.

“I had no idea about the strike happening, and I was waiting for two hours in the airport for the train to arrive and it didn’t arrive,” said vacationer Ian Crossen, from New York. “I feel a little bit frustrated. And I’ve spent a lot of money. I’ve spent money I didn’t need to, apparently.”

Vladimir Madeira, a Chilean tourist vacationing in Paris, said the strike has been “a nightmare.” He hadn’t heard about the protest until he arrived, and transport disruptions foiled his plans to travel directly to Zurich.

Beneath the closed Eiffel Tower, tourists from Thailand, Canada and Spain echoed those sentiments.

Bracing for possible violence along the route of the Paris march, police ordered all businesses, cafes and restaurants in the area to close. Authorities banned protests in the more sensitive neighborhoods around the Champs-Elysees avenue, presidential palace, parliament and Notre Dame Cathedral. 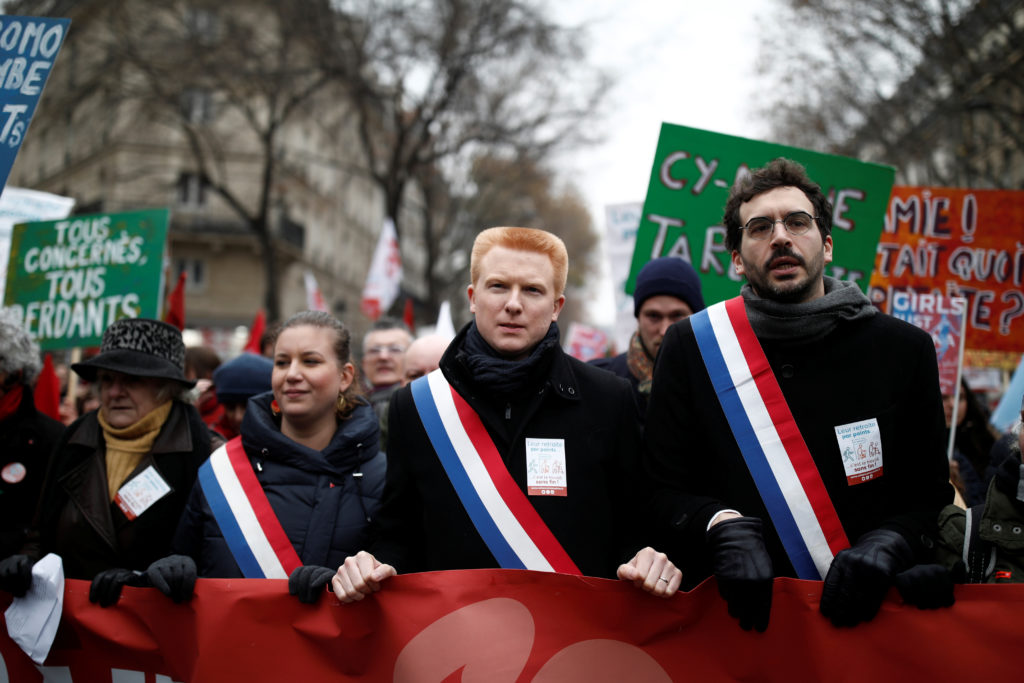 Police carried out security checks of more than 6,000 people arriving for the protest and detained 65 even before it started. Embassies warned tourists to avoid the protest area.

The mood was impassioned in the crowd massed on Boulevard Magenta in eastern Paris.

Health workers showed up to decry conditions in hospitals. Students pointed to recent student suicides and demanded government action. Environmentalists emphasized that climate justice and social justice are one and the same. And young and old roundly condemned the new retirement plan, which they fear would take money out of their pockets and reduce the period of repose the French expect in the last decades of their lives.

Eric Mettling, who joined the yellow vests at the start of their movement, said the general strike had brought together social movements across France in a manner unprecedented in recent memory to denounce “the social crisis.”

Skirmishes broke out between police firing tear gas and protesters throwing flares at a protest in the western French city of Nantes, and thousands of red-vested union activists marched through cities from Marseille on the Mediterranean to Lille in the north.

Lacking public transport, commuters used shared bikes or electric scooters despite near-freezing temperatures. Many workers in the Paris region worked from home or took a day off to stay with their children, since 78% of teachers in the capital were on strike.

The big question is how long the strike will last. Transport Minister Elisabeth Borne said she expects the travel troubles to be just as bad Friday, and unions said they’ll maintain the Paris subway system strike at least through Monday.

Public sector workers fear Macron’s reform will force them to work longer and shrink their pensions. Some private sector workers share their worries, while others welcome the reform. 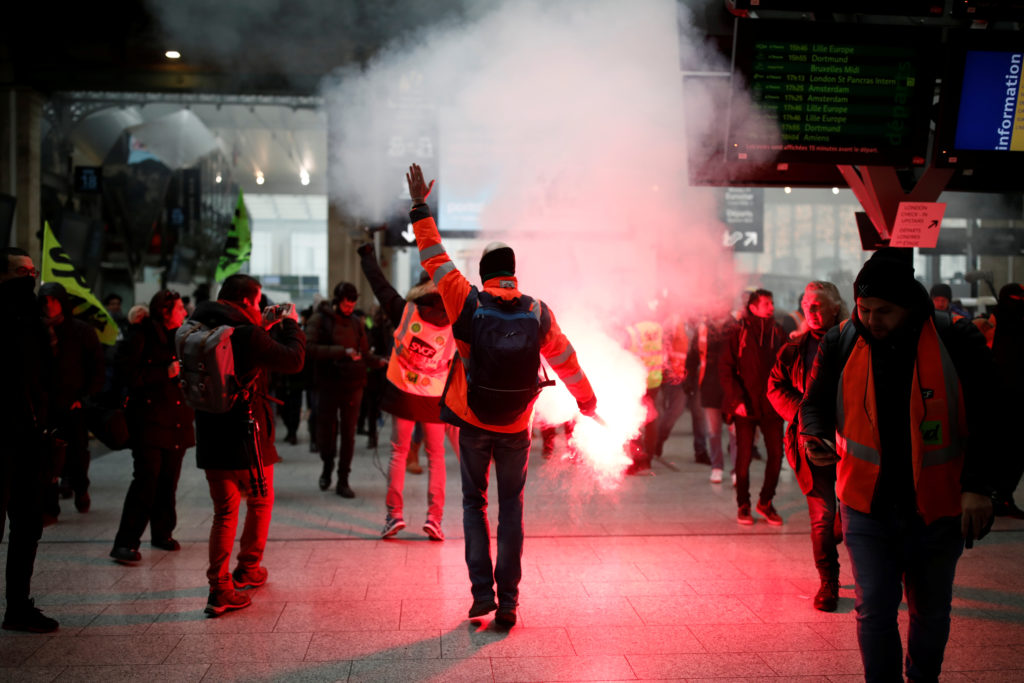 A French SNCF railway worker on strike holds a flare as he walks at Gare du Nord railway station before a demonstration against French government’s pensions reform plans in Paris as part of a day of national strike and protests in France, December 5, 2019. Photo by Benoit Tessier/Reuters

Joseph Kakou, who works an overnight security shift in western Paris, walked an hour to get home to the eastern side of town Thursday morning.

To Macron, the retirement reform is central to his plan to transform France so it can compete globally in the 21st century. The government argues France’s 42 retirement systems need streamlining.

While Macron respects the right to strike, he “is convinced that the reform is needed, he is committed, that’s the project he presented the French in 2017” during his election campaign, the presidential official said. The official was not authorized to be publicly named.

After extensive meetings with workers, the high commissioner for pensions is expected to detail reform proposals next week, and the prime minister will release the government’s plan days after that.

Left: People walk near the Eiffel Tower during a strike by all unions of the Paris transport network (RATP) as part of a day of national strike and protests against French government's pensions reform plans, France, December 5, 2019. Photo by Gonzalo Fuentes/Reuters