MEXICO CITY — As Washington and Mexico City both took victory laps Saturday over a deal that headed off threatened tariffs on Mexican imports, it remained to be seen how effective it may be and migration experts raised concerns over what it could mean for people fleeing poverty and violence in Central America.

Other than a vague reiteration of a joint commitment to promote development, security and growth in Central America, the agreement focuses almost exclusively on enforcement and says little about the root causes driving the surge in migrants seen in recent months. 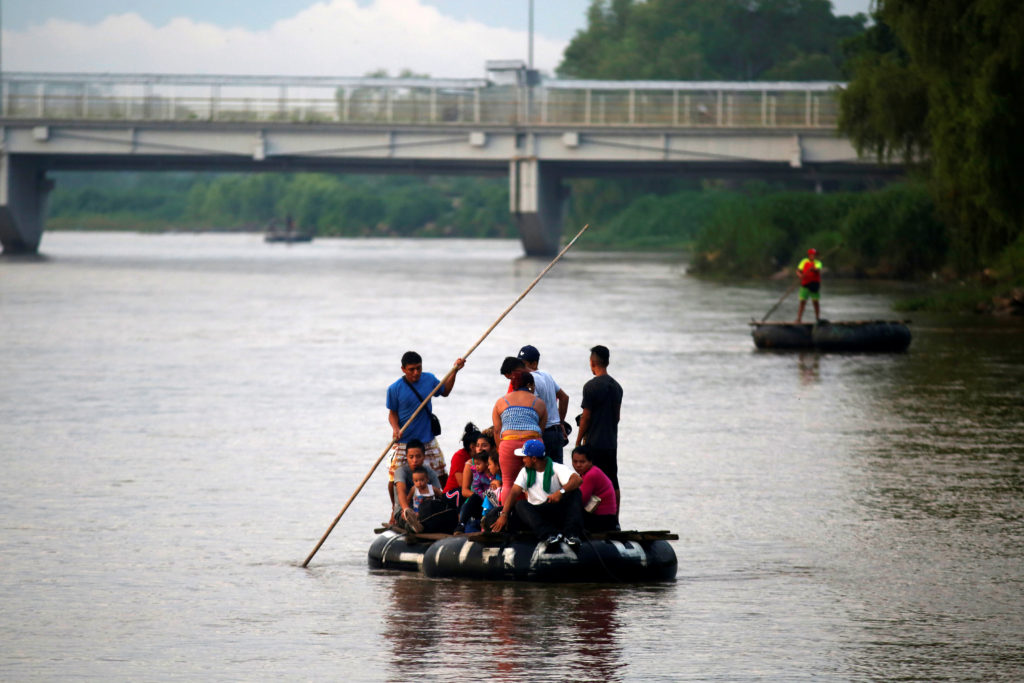 Migrants cross the Suchiate river on a raft from Tecun Uman, in Guatemala, to Ciudad Hidalgo, as seen from Ciudad Hidalgo, Mexico, June 8, 2019. Photo by Jose Cabezas/Reuters

“My sense is overall the Mexican government got out of this better than they thought. The agreement though leaves a lot of big question marks,” said Andrew Selee, president of the Migration Policy Institute. “It’s good that the two sides reached an agreement which allows both of them to save face, but it’s not clear how easy it is to implement.”

The deployment of 6,000 National Guard troops appears to be the key commitment in what was described as “unprecedented steps” by Mexico to ramp up enforcement, though Interior Secretary Olga Sánchez Cordero said that had already been planned and was not a result of external pressure.

Mexico was already increasing enforcement such as detentions, deportations and checkpoints. In recent weeks it broke up the latest migrant caravan, snuffing out most appetite for traveling in large, visible groups.

If Mexico does more as promised, it’s likely to be seen in intensifications of those same efforts, experts said — raids on hotels where migrants stay or on bus companies transporting them north to the U.S. border. The two countries also agreed to collaborate to share information on and disrupt people-smuggling networks, a new focus seen earlier this week when Mexico arrested two migration activists and froze accounts of over two dozen people alleged to have organized caravans. 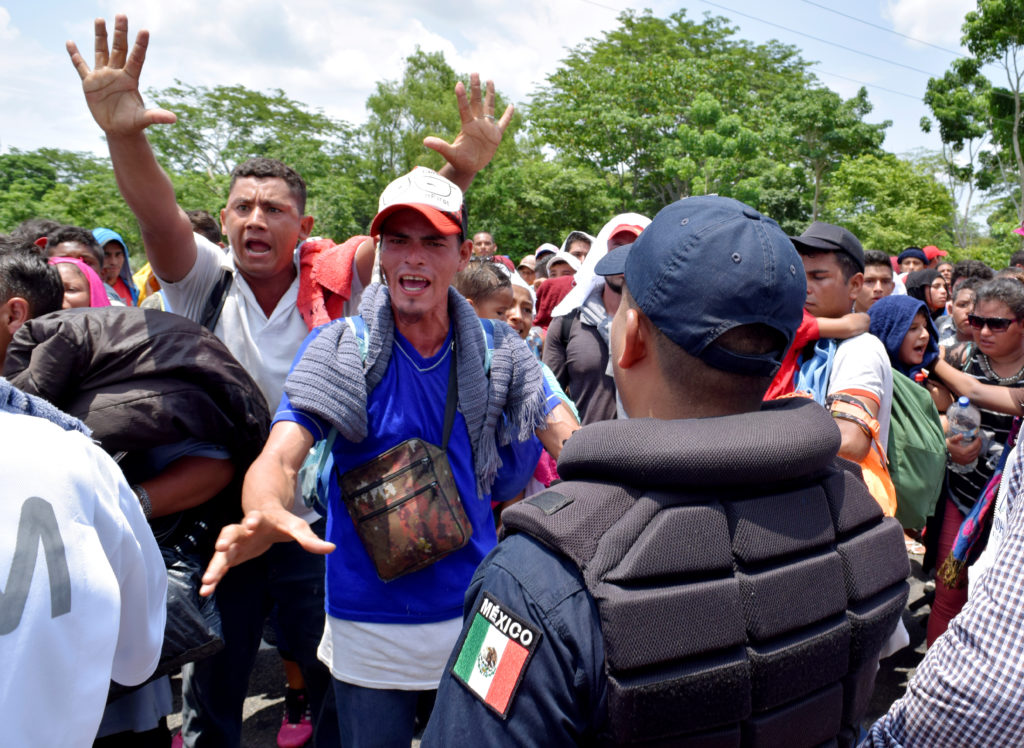 Migrants gesture while arguing with a federal police officer during a joint operation by the Mexican government to stop a caravan of Central American migrants on their way to the U.S., at Metapa de Dominguez, in Chiapas state, Mexico June 5, 2019. Photo by Jose Torres/Reuters

Observers said a concern is that even more aggressive enforcement could put migrants with legitimate asylum claims at risk of being deported from Mexico to the dangers they fled in the first place. Also, Mexican security forces are known for often being corrupt and shaking migrants down for bribes. A renewed crackdown is seen as making migration through Mexico more difficult and more dangerous, but doing little to discourage Central Americans desperate to escape poverty, hunger and violence.

At the Movimiento Juventud 2000 shelter in Tijuana, across from San Diego, migrants were camped out Saturday in dozens of orange tents in the warehouse-like space with corrugated metal roofs and siding. Reyna Vázquez, from Honduras, urged people to reflect on why people like her leave home, family and country.

“If they were to think about that and instead of closing the door give us an opportunity to show that we are people who want to work and all we want is a future for our children and our family,” Vázquez said.

Earlier this month, @DHSOIG made surprise visits to a @CBP Border Patrol facility in El Paso.

A reminder that “Remain-in-Mexico” is an outright abdication of our moral — and legal — obligations to asylum seekers.

And this deal just doubles down on the cruelty.https://t.co/IJQyIz3Eof

Maureen Meyer, an immigration expert at the Washington Office on Latin America, said people are fleeing their home “regardless of what the journey might mean and regardless of what chance they may have for seeking protections in Mexico or in the United States.”

“It seems like in all these discussions (over tariffs and immigration) the human reality of these people and why they’re leaving Central America was lost,” she continued. “It was ‘what can we do to stop them,’ and not ‘what can we really do to create the conditions in their home countries so that people don’t have to leave.’”

Another key element of the deal is that the United States will expand a program known as the Migrant Protection Protocol, or MPP. According to Mexican immigration authorities, since January there have been 10,393 returns by migrants to Mexico while their cases wend their way through U.S. courts.

MPP has been plagued by glitches and so far has been introduced only in California and El Paso, Texas, and Selee said there are logistical hurdles to further expansion. Right now the MPP figure of 10,000 or so represents “a drop in the bucket” compared to overall migration, he added.

Foreign Relations Secretary Marcelo Ebrard, who led the negotiations, said the agreement does not include any quotas. 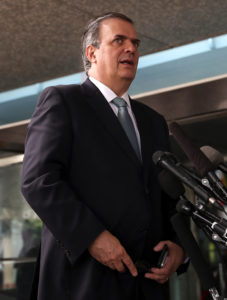 Mexico’s Foreign Minister Marcelo Ebrard speaks to reporters after a meeting between U.S. and Mexican officials on immigration and trade at the State Department in Washington, U.S., June 6, 2019. Photo by Leah Millis/Reuters

If MPP does roll out on a mass scale along the United States’ entire southern border, it could overwhelm Mexican border cities. Mexico promised to offer jobs, health care and education for returnees, but has little infrastructure to do so. Currently most shelters and support programs are run by the likes of NGOs and the Roman Catholic Church.

And if the program were to include places like Tamaulipas, the Gulf coast state where cartels and gangs control large swaths of territory, migrants could be at even greater risk.

“You know this is an area that the U.S. government considers that it’s not safe for any American citizen,” Meyer said, referring to the State Department’s highest-level warning against all travel to Tamaulipas due to crime and kidnappings. “And yet it’s OK for us to send people back there?”

Still, the deal was hailed by many in Mexican industry and politics.

Arturo Rocha, a Foreign Relations Department spokesman, tweeted late Friday that it was “an unquestionable triumph for Mexico.” Avoiding tariffs sends a calming message to ratings agencies worried about a possible trade war, he said, adding that President Andrés Manuel López Obrador’s government had won U.S. recommitment to Central American development and resisted “safe third country” designation, a concession sought by Washington that would have required asylum seekers to apply first in Mexico.

However Abdel Camargo, an anthropologist at the Frontera Sur College in southern Mexico, said that by accepting MPP returnees, “Mexico does not become a safe third country but de facto is going to act as one.”

Some such as Felipe Calderón, who was president as a member of the conservative National Action Party, questioned whether Mexico was truly master of its own migratory policy. But José Antonio Meade, a five-time Cabinet minister who lost last year’s election to López Obrador, praised Ebrard for avoiding damaging tariffs “in the face of very complex conditions.”

In San Jose del Cabo for a summit of North American mayors, Juan Manuel Gastelum of Tijuana, across from San Diego, said he’s fine with more migrants being returned to his city as long as the federal government invests in caring for them. He added that the threat of tariffs may have been necessary to force his country’s hand.

“How else was Mexico going to understand that it is not right to leave migration uncontrolled?” said Gastelum, who is a member of National Action.

In the far southern Mexican town of Ciudad Hidalgo, across the river border from Guatemala, Reynoldo Reyes Gavidia, sat in the main square. A native of Honduras, he’s been in and out of Mexico over the years and said he was returning this time due to violence back home.

Gavidia said he didn’t know much about the National Guard beyond rumors that it was coming, but he wasn’t concerned about being deported — his documents were in order. Not so for many other migrants.

“Most are worried,” Gavidia said, “because they could be set upon at any time. … There will be no sleeping here today.”

Left: Migrants help a fellow migrant, who got injured during a joint operation by the Mexican government to stop a caravan of Central American migrants on their way to the U.S., at Metapa de Dominguez, in Chiapas state, Mexico June 5, 2019. Photo by Jose Torres/Reuters