ROME — Several migrants jumped into the sea from a Spanish rescue boat Sunday in a thwarted bid to reach shore in Italy, where the government’s hard-line interior minister has refused to let the 107 passengers disembark.

“We have been warning for days, desperation has its limits,” said Open Arms founder Oscar Camps, who released a video showing four migrants wearing orange life vests swimming toward Lampedusa island. Crew members from the humanitarian group’s ship swam quickly toward them so they could be brought back aboard.

Interior Minister Matteo Salvini refused docking permission because he contends charity rescue boats essentially facilitate the smuggling of migrants from the traffickers’ base in Libya. Salvini’s resolve has seen previous similar standoffs end with disembarkation either ultimately taking place in Italy or elsewhere in Europe. 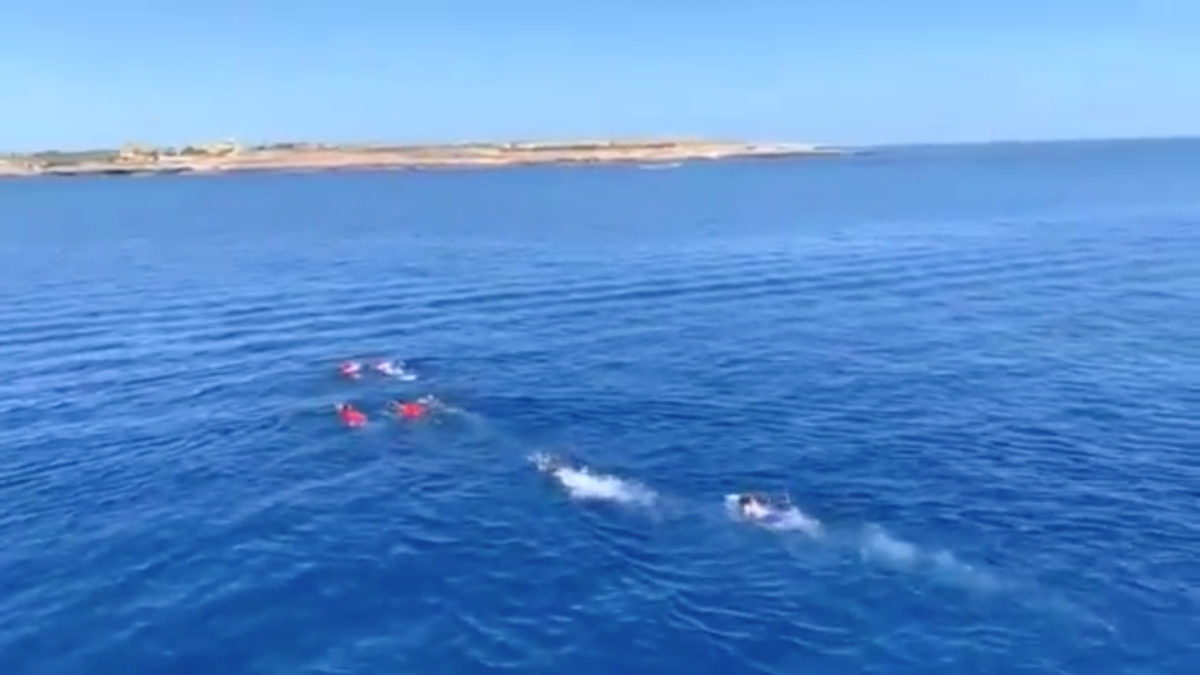 A still image taken from a video shows migrants attempting to swim ashore after jumping off the Spanish rescue ship Open Arms, off the coast of Lampedusa, Italy, August 18, 2019. Photo by Open Arms/Handout/ via Reuters.

On Sunday, Spain offered one of its ports for the migrants to come ashore, but Open Arms said it would be absurd to undertake another long journey with the migrants, many of whom have been onboard for nearly three weeks.

For days, Open Arms has been anchored off Lampedusa, a fishing and vacation island between Sicily and northern Africa. The boat initially had 147 migrants aboard when it reached Italian waters. In the last few days, 40 migrants have transferred by Italian coast guard vessels to Lampedusa, including a few who were ailing and 27 believed to be minors.

After the migrants who had jumped from the ship were back aboard, several female migrants wailed or pressed their hands to their head as if in disbelief. A few of the male migrants could be seen gesturing and shouting angrily, while crew members tried to calm tempers.

With Salvini challenging the survival of Italy’s populist government in a push for an early election he hopes will give him the premiership, the minister is hardening his already-stiff resolve to keep humanitarian ships from bringing rescued migrants to Italy. His League’s party blames migrants for crime, and its popularity among voters has been soaring.

A Norwegian-flagged ship, Ocean Viking, operated by two French humanitarian groups, has been sailing for days with 356 rescued migrants aboard between Malta and Lampedusa and other tiny Italian island, Linosa, awaiting assignment of a safe port. Salvini vowed to block that ship, too.

“Whoever hangs tough wins,” Salvini said. “In Italy there’s no place for traffickers.”

Open Arms carried out its first rescue of this group 17 days earlier, plucking migrants to safety from smugglers’ unseaworthy dinghies off Libya.

Seeking to break the standoff, Spain on Sunday offered its southern port of Algeciras to Open Arms, even while acknowledging that that port is far and unsuitable to disembark so many migrants. 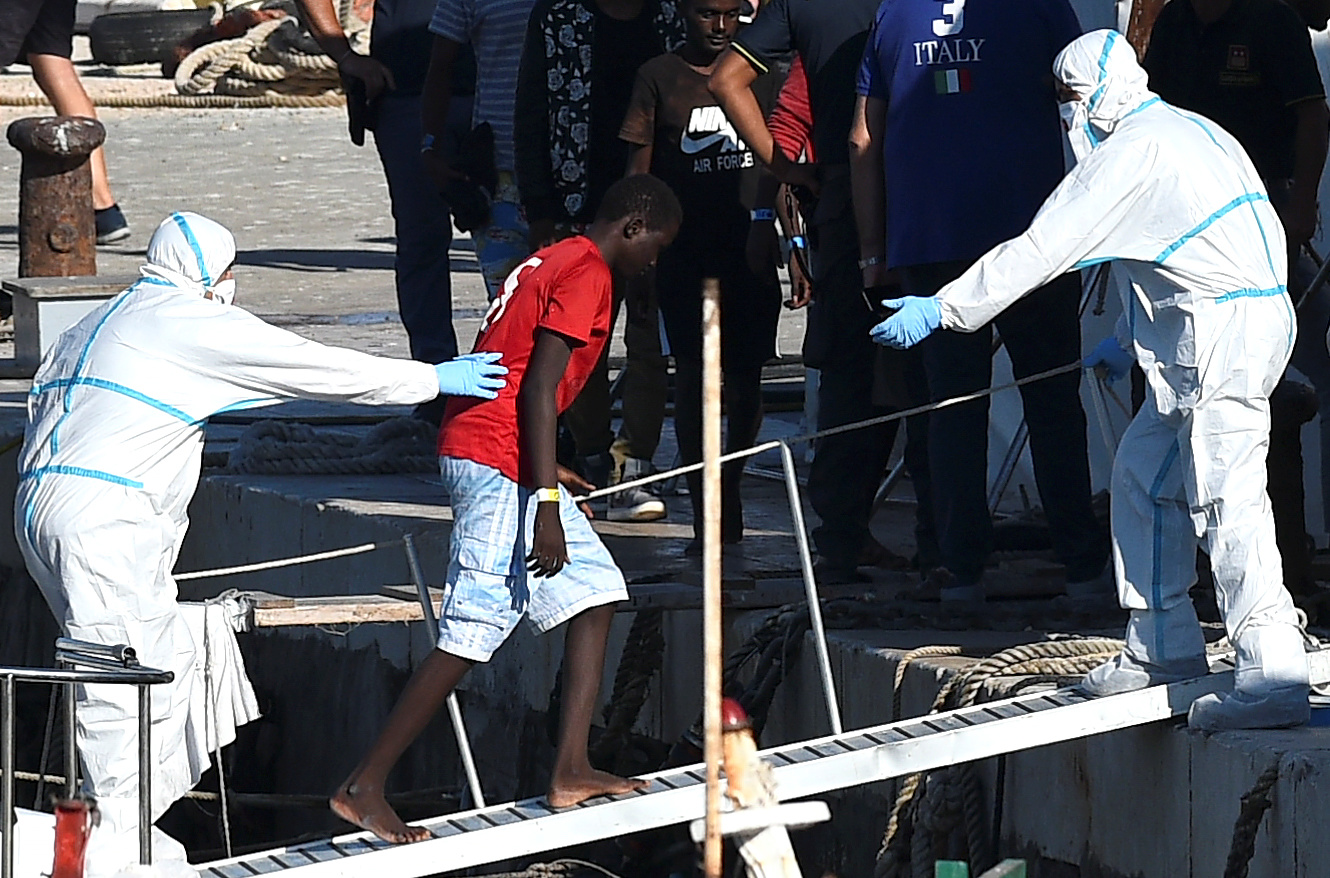 A minor who was among migrants stranded on the Spanish migrant rescue ship Open Arms disembarks in Lampedusa, Italy August 17, 2019. Photo by Guglielmo Mangiapane/Reuters

The office of Spain’s caretaker prime minister, Pedro Sánchez, said the offer reflected the “emergency situation” on the boat and Salvini’s “unconceivable response” in refusing docking.

“But right now, Spain is the only country ready to receive (the boat),” Sanchez’ office said.

But a spokeswoman for the Spanish NGO, Laura Lanuza, said undertaking such a long voyage to Spain would be “crazy.”

“There is anxiety, bouts of violence, control is becoming increasingly difficult,” she said. “To embark on a six-day sailing with these people on board who are at the very limit of their possibilities would be crazy. We can’t put their health and lives at risk.”

Salvini earlier on Sunday told the ship to go to Spain, and, in a tweet, accused Open Arms of staying anchored off Lampedusa “just to provoke me and Italy.”

Spain and five other countries have offered to take the migrants, dividing them among themselves, but that didn’t change Salvini’s mind against docking.

Open Arms contended that Salvini is using the 107 migrants for “xenophobic and racist propaganda.”

In a separate tweet, Camps blasted Salvini of exploiting the lives of migrants for political gain. “What more does @matteosalvinimi need for his political campaign? Deaths?”

On Saturday, Salvini reluctantly agreed with Italian Premier Giuseppe Conte’s demands to let the minors disembark. Salvini said on Sunday that eight of those youths insisted they were adults after setting foot on Lampedusa.

On Tuesday, Conte addresses the Senate, where Salvini’s party has submitted a no-confidence vote against him, even though the League is the 14-month-old, government’s junior coalition partner. Conte could resign, possibly paving the way for an election in a couple of months just as Salvini’s popularity is soaring in opinion polls.

Aritz Parra contributed to this report from Madrid.