Migrants cross river into Mexico after being refused passage to U.S.

The migrants moved off the border bridge and toward the river after Mexican officials told them they would not be granted passage through the country.

With a letter copied to the “migrants located on the border bridge,” Mexican officials rejected migrants’demands to cross freeely through Mexico. But the letter relayed by an official of Mexico’s immigration agency restated the Mexican government’s position that the migrants would be allowed to enter in orderly fashion.

Edwin Chavez, a 19-year-old from Tegucigalpa, said, “By river, that’s the way it will be.”

“There’s no fear,” Chavez said. “We’re already used to repression. In your country they repress you, they hit you. It’s always like that.”

Amid shouts and even some fireworks they began wading across the shallow river.

Earlier, a migrant who refused to give his name stood near the shuttered gates on the bridge over the Suchiate River and read an open letter from the group to President Andres Manuel Lopez Obrador.

“We have come peacefully to try to start a dialogue with the government, in order to reach an agreement in which all the members of the caravan will be allowed permission to freely pass through Mexican territory,” he read.

Trump has forced asylum seekers to remain in Mexico, or apply in Central American countries, effectively removing one of the escape valves for previous caravans. 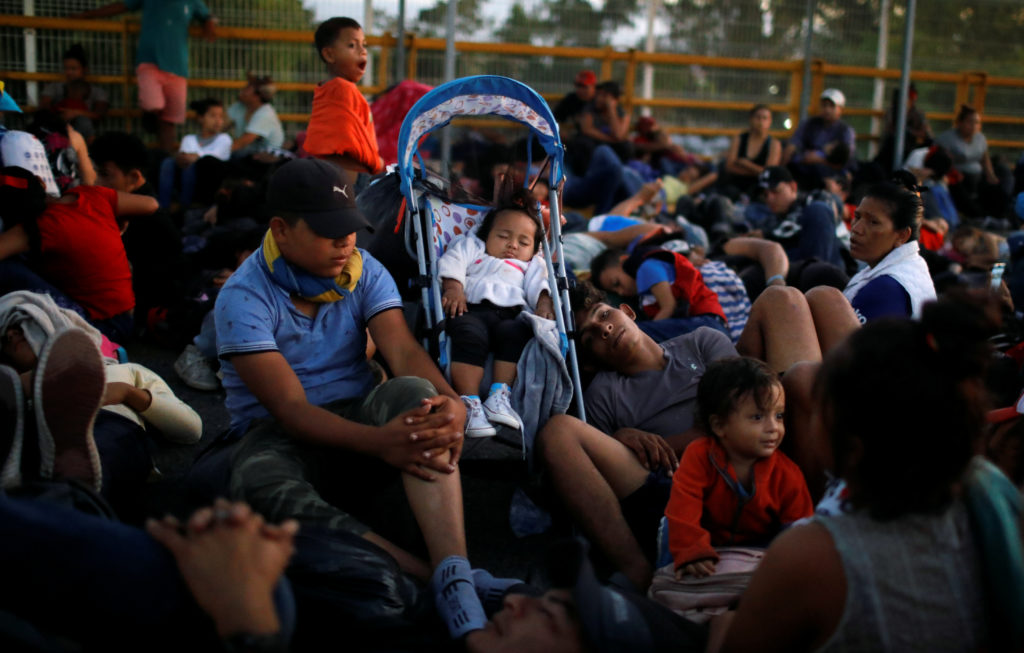 Migrants, part of a caravan travelling to the U.S., gather near the border between Guatemala and Mexico, in Tecun Uman, Guatemala, January 20, 2020. Photo by Jose Cabezas/Reuters

Monday’s standoff was a contrast to Saturday, when Mexican troops scuffled with some migrants and slammed the gate shut as hundreds of others pressed forward in an effort to start new lives in the United States.

Denis Contreras, a Honduran making a second try at reaching the U.S., laid out the plan Sunday night to his fellow migrants marooned in this Guatemalan border town: First the men will go, then the families and the women traveling alone with children.

Contreras, the pint-sized Honduran leading Monday’s charge, said he won’t give up. He was already denied political asylum and deported from San Diego, California. But if he returns to Honduras, he said, criminal gangs will kill him or his family.

Around him, hundreds of migrants chanted: “Here we are, and we’re not going anywhere, and if you throw us out, we’ll return!”

Mexico has stepped up efforts to prevent migrants from reaching their desired final destination — the U.S. — under threat of trade and other sanctions from President Donald Trump.

After two caravans successfully reached the U.S. border in 2018 and early 2019, Mexico began cracking down, and by April 2019 raided the last attempt at a caravan, rounding up migrants as they walked down a highway.

As this week’s caravan approached, Mexico sent soldiers to patrol its southern border and monitored the area with drones. Migrants sometimes travel via caravan because it provides safety in numbers and offers a chance for migrants too poor to pay smugglers.

Prior caravans have persuaded Mexican authorities to let them cross the southern border, either for humanitarian reasons or via brute force.

The Mexican government declared its efforts over the weekend a success, saying late Sunday that the migrants’ attempts to enter the country in a “disorderly fashion” were “fruitless.”

Mexican officials extended a different welcome mat, of sorts, over the weekend, promising the migrants work and a chance to stay in the country — though the details were slim and many migrants feared they would instead be deported.

The offer of employment, and not just legal status or asylum, represented a new twist in Mexico’s efforts to find humane solutions to the mostly Central American migrants who are fleeing poverty and violence in their home countries.

More than 1,000 migrants opted to give Mexico a try, and were transported by van to immigration centers for further processing.

Claudia León, coordinator of the Jesuit Refugee Service in the town of Tapachula, described the roundups backed by vague promises of employment as “de facto detention” that could trample the rights of refugees.

It was unclear what sort of work Mexico had in mind for the migrants, considering that half the Mexican population is poor and millions are unemployed.

Late Sunday, the Mexican government issued a statement saying that “in the majority of the cases,” the hundreds of migrants it had received in recent days would be returned to their countries of origin “should the situation merit it.”

Left: Migrants, part of a caravan travelling to the U.S., walk across the Suchiate river at the border between Guatemala and Mexico, in Ciudad Hidalgo, Mexico, January 20, 2020. Photo by Jose Cabezas/Reuters