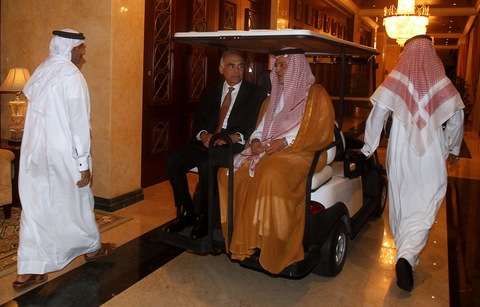 Saudi Foreign Minister Prince Saud al-Faisal and his Egyptian counterpart Mohammed Kamel Amr arrive on a buggy to attend the Arab League ministerial meeting on the Syrian crisis in the Qatari capital Doha on July 22. Photo by AFP/Getty Images.

The Arab League has at turns been called “congenitally irrelevant,” “extremely weak,” and “toothless.”

Its membership has long been composed of despotic rulers who deeply mistrust one another, while the group’s charter emphasizes member-state’s sovereignty above all else. It’s a combination that has not inspired great things from the regional body.

But with the Arab Spring and upheaval in the region, came the League’s chance to shine.

It was the Arab League that stamped approval on NATO’s intervention in Libya, helped convince Yemen’s former President Ali Abdullah Saleh to step down and most recently, helped lead the diplomatic charge at the United Nations against Bashar al-Assad of Syria.

Marc Lynch, director of the Institute for Middle East Studies at George Washington University (and the one who called the League “congenitally irrelevant”), told the NewsHour that the organization has gained a sense of itself due to Saudi Arabia and Qatar joining forces to drive the group’s agenda. “Without that alignment,” Lynch said, “the Arab League would have been as dysfunctional and useless as it’s always been.”

But it’s unclear whether this new, more dynamic Arab League is the real deal.

“It is premature to judge whether this is indicative of a new role for the league or simply a reflection of the strong views of states like Saudi Arabia or Qatar, which have forced a certain course of action uncharacteristic of the League,” wrote the Carnegie Endowment’s Marwan Muasher in an email to the NewsHour. He said he thinks the current requirement that all decisions at the organization be made through consensus is a big part of the problem. Such consensus “has proved difficult to attain in the past,” he said.

The consensus requirement does have an upside for some League members: it gives outsized power to smaller countries in the League, like Morocco. On Wednesday’s NewsHour, top Moroccan diplomat Youssef Amrani will talk about the Arab League’s role in Syria and hosting the Friends of Syria conference in Rabat next month.

“It’s useful for Morocco to have the Arab League,” said Lynch, because it gives the country a chance to punch above it’s weight in the international arena. In addition to membership in the League, Morocco is currently the only Arab country on the U.N. Security Council.

Still, Lynch bets that the entire Arab League will revert to form as soon as Saudi Arabia and Qatar stop playing nice.

“Odds are, as soon as Saudi Arabia and Qatar start bickering again, [the League] will lose traction,” Lynch said. “They were brought together by this intense perception of intense threat by the Arab uprisings and the shared animosity for [Libyan leader Moammar] Gadhafi.”

The Saudi and Qatari leaders of the League are now talking about their commitment to democracy and reforms, Lynch said, adding: “But nobody looks at the Arab League for that.”