Despite efforts by the company to intervene, innocent people in India are being murdered by aspiring vigilantes who are falling prey to false information spread through the popular messaging application WhatsApp.

India is WhatsApp’s largest market, where more than 200 million people use it, often as their main form of communication and sending billions of messages a day. But many of its users are also inexperienced with smart phones and vulnerable to misinformation that spreads fast through the app.

“Even after these efforts … these mob lynchings are continuing.” – Annie Gowen, India bureau chief for the Washington Post

More than a dozen people have been killed since May by mobs convinced by messages that the people they are lynching are guilty of child trafficking, organ harvesting or other egregious acts.

The company WhatsApp, which is owned by Facebook, is publishing newspaper advertisements about fake news and disclosing when a post is forwarded, which can help indicate whether it is real.

But the core appeal of WhatsApp is that it allows people communicate with encryption, which makes communication difficult to regulate.

And as India Bureau Chief Annie Gowen of the Washington Post reports, despite the company’s efforts, another person was killed because of these viral messages on Friday.

A tech employee working in Hyderabad and his friends were returning to his native village in the state Karnataka when they ran into a mob that, because of rumors spread on the app, was convinced they were child kidnappers. 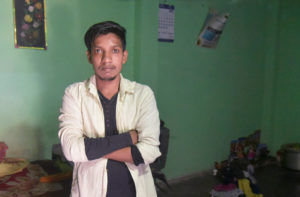 Satish Bhaykre, 21, who was beaten by a mob due to a fake WhatsApp text, poses inside his house on the outskirts of Nagpur, India, June 23, 2018. Photo by Reuters

The tech worker and his friends were able to drive away, but then details about their van spread fast enough for the mob to stop them and kill one of the men inside.

“Even after these efforts,” Gowen said, “these mob lynchings are continuing.”

She said people in these communities are making grassroot efforts to debunk rumors before the mobs start forming. Police, she said, are setting up their own WhatsApp groups so people can check in to see if the information is accurate.

And in some villages, people are making announcements over loudspeakers, asking WhatsApp users to be wary of the messages they’re receiving.

The biggest problem, Gowen said, is digital illiteracy, because a lot of the people falling prey are in less-accessible areas and do not have a robust understanding of how digital information is disseminated and spreads.

The Indian Government told WhatsApp earlier this month that it needed to address the issue, but the government at the central level “has been stymied” because of the circumstances, she said.

Left: More than a dozen people in India have been killed since May by mobs convinced by messages on WhatsApp that the people they are lynching are guilty of child trafficking, organ harvesting or other egregious acts. India Bureau Chief for the Washington Post Annie Gowen joins Hari Sreenivasan via Skype from Delhi.