Security was extremely tight, with police setting up 40 checkpoints leading to the parade area. Selfie sticks, bottles and banners — and even shouting — were not allowed inside the restricted zone. Residents in high-rise apartment buildings along the road were advised not to look down from their windows or balconies.

Naruhito succeeded his father, Akihito, on May 1 following his abdication, and formally ascended the Chrysanthemum Throne in a palace ceremony last month. He’s pledged to follow his father’s example to fulfill his responsibilities as a state symbol, stick with pacifism and stay close to the people. Under Japan’s postwar constitution, the emperor has no political power and is limited to ceremonial roles.

Sunday’s parade started from the Imperial Palace, with the Kimigayo national anthem played by a marching band.

Naruhito, wearing a tail coat decorated with medals and carrying a brimmed hat, and Masako, in an off-white long dress and a tiara, waved from a Toyota Century convertible. The car was decorated with the Chrysanthemum emblems and the emperor’s flag during the half-hour motorcade on the 4.6-kilometer (3-mile) route from the palace to the Akasaka imperial residence in the soft afternoon sun.

Naruhito, sitting on the right side on the slightly raised backseat, constantly turned his head to the right and left, responding to the people cheering from the opposite side of the street as the motorcade slowly moved at a jogger’s speed, led by a fleet of police motorbikes.

The parade was postponed from its original October date due to a typhoon that left more than 90 people dead and tens of thousands of homes flooded or damaged. 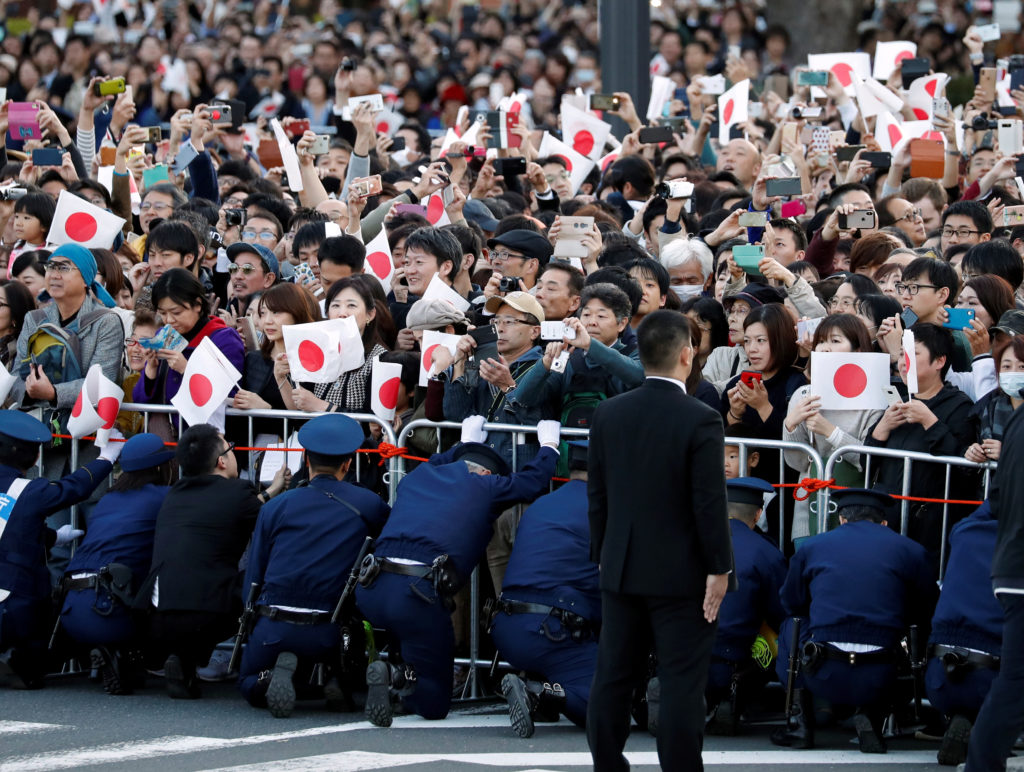 The parade wraps up Naruhito’s official succession events, though he’ll perform a highly religious imperial rite later this week. Some experts say the government’s funding of the Shinto harvest ritual could violate constitutional separation of state and religion.

Thousands of people had lined up at checkpoints hours before the parade, trying to secure their place to get the best possible view of the royal couple.

Takahiro Suzuki, a 75-year-old retiree who traveled from Chigasaki, west of Tokyo, arrived two hours ahead of the parade, but said it was worth it.

“The sky is so blue and this is a great day for taking photos, as if it’s the heaven’s blessing for (the emperor),” said Suzuki, an amateur photographer.

He said he admired the former emperor and wants to see Naruhito continue his father’s work.

“I hope he will continue to stick with peace, as his father did,” Suzuki said, but added that Japan should think seriously about the stability of the monarchy as it faces a shortage of eligible successors. Conservatives insist on the male-only succession, but Suzuki says he wouldn’t mind a female monarch.

The parade was the first since Naruhito and Masako’s marriage in June 1993, just three years after their parents celebrated their enthronement in a Rolls Royce. 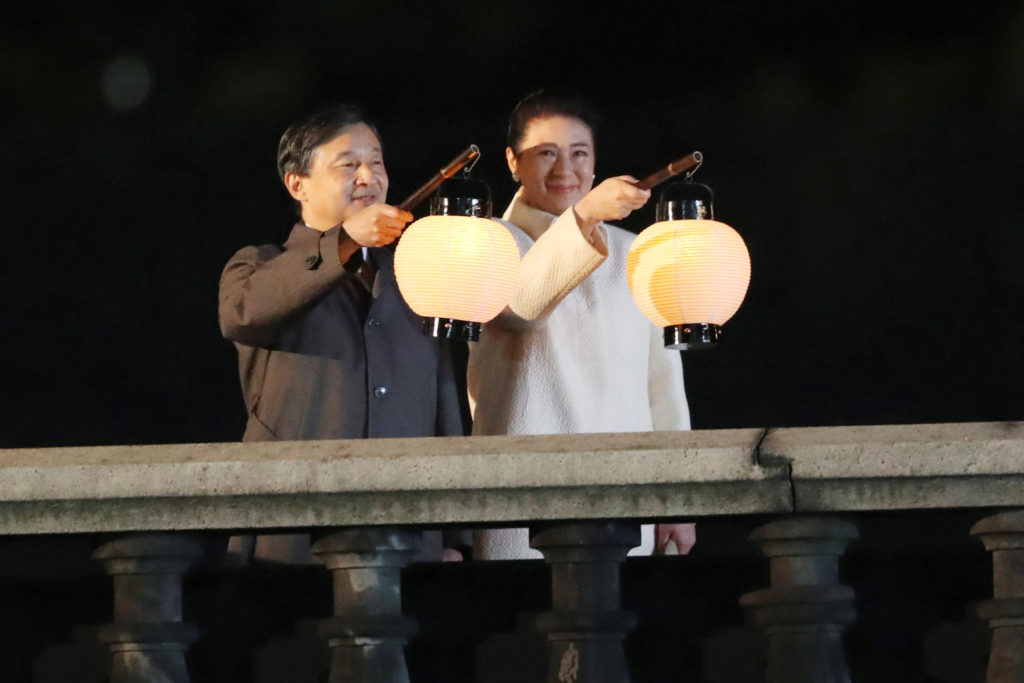 Japan’s Emperor Naruhito and Empress Masako hold lanterns during a national celebration to mark his enthronement at the entrance of the Imperial Palace in Tokyo, Japan November 9, 2019. Koji Sasahara/Pool via Reuters.

Naruhito and Masako have been warmly welcomed by the public. Many Japanese were especially impressed by the couple freely conversing with President Donald Trump and first lady Melania Trump during their visit weeks after Naruhito’s succession in May, according to palace watchers.

There are expectations that Naruhito — who is Japan’s first emperor with a college degree and who studied abroad — and his Harvard-educated wife will internationalize the imperial household.

Naruhito, who studied at Oxford, is a historian, a viola player and an expert on water transport. Masako, a former diplomat, has struggled for more than a decade and had largely withdrawn from public appearances until recently. She developed “adjustment disorder” after giving birth to the couple’s only child, Princess Aiko, and facing pressure to produce a boy in Japan’s monarchy.

Despite concerns about her health and skepticism over her ability to fulfill even part of the hugely popular former Empress Michiko’s work, Masako has been seen in good health and in smiles as she attended most of her duties recently.

Opinion polls show public support and a sense of friendliness to the royal family have increased over the past three decades, owing largely to Naruhito’s parents’ effort to bring what used to be an aloof palace closer to the people.