Mother Teresa was canonized into Saint Teresa at the Vatican on Sunday morning, joining Saint Nicholas, Joan of Arc and thousands of others the Church found to be interceding with God in heaven to perform miracles on Earth.

Following a brief biography of her work as an Albanian nun, which was mostly in Calcutta and for the poor, Pope Francis of the Roman Catholic Church led the ceremony as 120,000 people in St. Peter’s Square cheered. The Vatican ascribes sainthood to people who it says have been proven to perform miracles after they die. Teresa died in 1997 at age 87, and has, according to the church, cured an Indian woman of a cancerous stomach tumor and a Brazilian man of a viral brain infection since then. 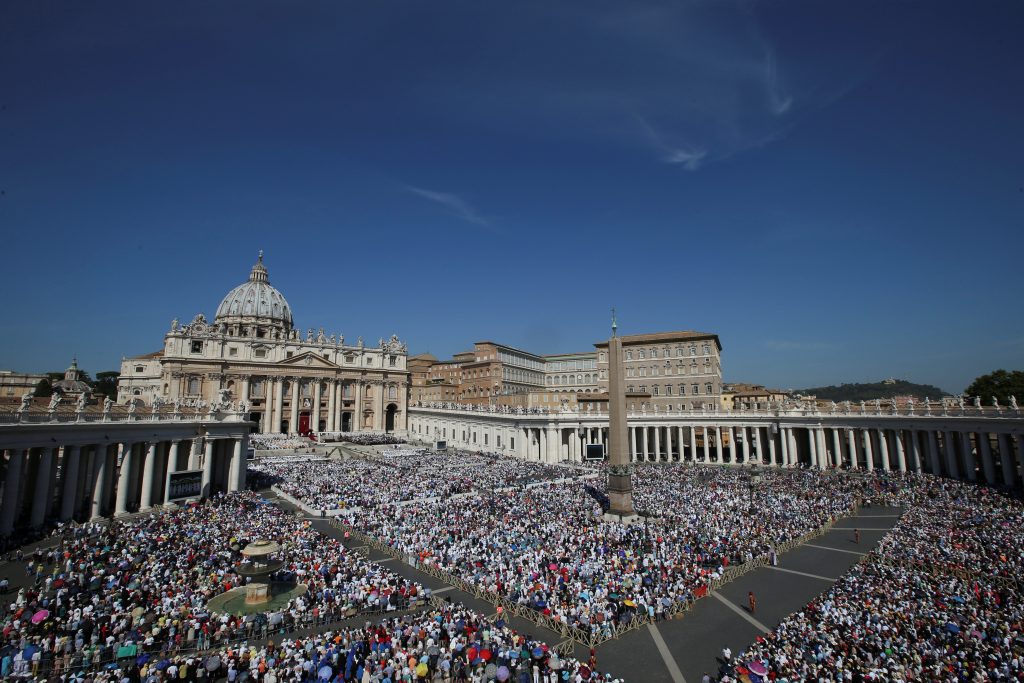 A general view of Saint Peter’s Square as Pope Francis leads a mass for the canonisation of Mother Teresa of Calcutta at the Vatican September 4, 2016. Photo by Stefano Rellandini/Reuters

“We declare and define Blessed Teresa of Calcutta to be a saint and we enroll her among the saints, decreeing that she is to be venerated as such by the whole Church,” Francis said. “She made her voice heard before the powers of the world, so that they might recognize their guilt for the crimes of poverty they themselves created.”

Following a trip to Darjeeling and work as a nun in Calcutta, now called Kolkata, young Teresa in the 1940s longed to help the people in the slum that her school, which was run by Irish nuns, overlooked. She got permission to leave the convent to pursue her own work. And in an attempt to appeal to locals, she wore a simple white sari, downplaying her faith as she moved forward. 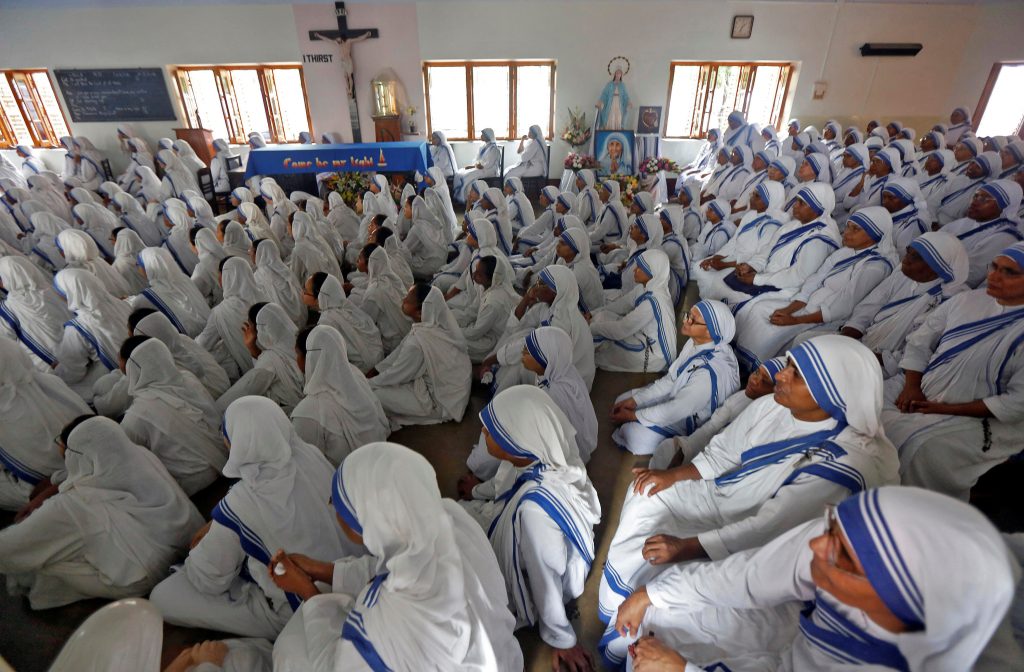 Nuns from the Missionaries of Charity in Kolkata, India, watch a live broadcast of the canonisation of Mother Teresa at a ceremony held in the Vatican, September 4, 2016. Photo by Rupak De Chowdhuri/Reuters

In 1950 she founded the Missionaries of Charity in Calcutta with an initial group of 12 followers. By 1969 it became an international association known to help “the poorest of the poor,” often by undertaking relief work after natural disasters. Ten years later she was awarded the Nobel Peace Prize.

She carved her way as a small woman with a large amount of power. She was a woman who was recognized by President Ronald Reagan with a Medal of Freedom and also persuaded Cuban leader Fidel Castro to allow her to work in his country.

Now, with more than 5,600 hospices in 139 countries, nuns in her order continue to wear the same sari – the white symbolizing purity and the three blue bands representing the vows they take.

“Let us carry Mother Teresa’s smile in our hearts and give it to those whom we meet along our journey,” Francis tweeted after the ceremony.

Let us carry Mother Teresa’s smile in our hearts and give it to those whom we meet along our journey. pic.twitter.com/YNGkhd9Z6m

But with influence also came criticism of the church, the missionary and of Teresa.

The process for sainthood is a costly and abused system – people have tried to debunk or simply don’t believe the miracles that Teresa has been said to perform.

Am proud a truly saintly Indian is Canonised. I still won't accept secular superstition of miracles, of #MotherTeresa Sadhus or Muslim Pirs

While Teresa was alive, some people questioned whether her order’s ulterior motive was to convert those who benefited. They would also criticize the quality of the order’s care and lack of hygiene, and her philosophy against abortion — which she made clear during her Nobel speech.

Following her death, the Missionaries of Charity has also come under scrutiny for its secrecy.

And some have resented Teresa’s fame, having earned it as an Indian citizen. Four other Indian citizens of Indian descent have also won Nobel prizes, but they seem to be lesser-known than Teresa.

“She built an empire of charity,” the Rev. Bernardo Cervellera, editor of the Vatican-affiliated missionary news agency AsiaNews, told the Associated Press earlier this year. “She didn’t have a plan to conquer the world. Her idea was to be obedient to God.”

Though it’s unclear if that was always her idea. For nearly 50 years, Teresa lived through spiritual doubt, despair and loneliness – a period that came to light during her beautification process.

“She understood very well when people would share their horror stories, their pain and suffering of being unloved, lonely. She would be able to share that empathy because she herself was experiencing it,” the Canadian priest who published the letters and spearheaded her saint-making campaign told the AP.

This was a revelation Francis reflected during the ceremony on Sunday.

“For Mother Teresa, mercy was the salt which gave flavor to her work, it was the light which shone in the darkness of the many who no longer had tears to shed for their poverty and suffering,” he said.

And that was, according to her book, what she aspired to do.

“If I ever become a Saint–I will surely be one of ‘darkness.’ I will continually be absent from Heaven – to light the light of those in darkness on earth,” she wrote.

Left: A nun, belonging to the global Missionaries of Charity, carries a relic of Mother Teresa of Calcutta before a mass celebrated by Pope Francis for her canonization in Saint Peter's Square at the Vatican September 4, 2016. Photo by Stefano Rellandini/Reuters