SEOUL, South Korea — North Korea said Sunday that it carried out a “very important test” at its long-range rocket launch site that it reportedly rebuilt after having partially dismantled it at the start of denuclearization talks with the United States last year.

The announcement comes amid dimming prospects for a resumption of negotiations, with the North threatening to seek “a new way” if it fails to get major U.S. concessions by year’s end. North Korea has said its resumption of nuclear and long-range missile tests depends on the United States.

Saturday’s test at the Sohae Satellite Launching Ground will have “an important effect on changing the strategic position of (North Korea) once again in the near future,” an unidentified spokesman from the North’s Academy of National Defense Science said in a statement, carried by the country’s official Korean Central News Agency.

The use of solid fuel increases a weapon’s mobility and reduces the amount of launch preparation time. The long-range rockets that North Korea used in either ICBM launches or satellite liftoffs in recent years all used liquid propellants.

CNN reported Friday that a new satellite image indicated North Korea may be preparing to resume testing engines used to power satellite launchers and intercontinental ballistic missiles at the site.

Seoul’s Defense Ministry said in a brief statement later Sunday that South Korea and the United States are closely monitoring activities at the Sohae site and other key North Korean areas.

President Donald Trump reacted to the development by saying that North Korea “must denuclearize.”

“Kim Jong Un is too smart and has far too much to lose, everything actually, if he acts in a hostile way,” Trump tweeted Sunday.

“North Korea, under the leadership of Kim Jong Un, has tremendous economic potential, but it must denuclearize as promised,” he said.

The North Korean test “is meant to improve military capabilities and to shore up domestic pride and legitimacy,” said Leif-Eric Easley, a professor at Ewha University in Seoul. “With the activity at Sohae, Pyongyang is also trying to raise international concerns that it may intensify provocations and walk away from denuclearization talks next year.”

The Sohae launching center in Tongchang-ri, a seaside region in western North Korea, is where the North has carried out banned satellite launches in recent years, resulting in worldwide condemnation and U.N. sanctions over claims that they were disguised tests of long-range missile technology.

North Korea has said its satellite launches are part of its peaceful space development program. But many outside experts say ballistic missiles and rockets used in satellite launches share similar bodies, engines and other technology. None of North Korea’s three intercontinental ballistic missile tests in 2017 was conducted at the Sohae site, but observers said the site was used to test engines for ICBMs.

After his first summit with North Korean leader Kim Jong Un in Singapore in June last year, Trump said Kim told him that North Korea was “already destroying a major missile engine testing site” in addition to committing to “complete denuclearization” of the Korean Peninsula.

Satellite imagery later showed the North dismantling a rocket engine-testing stand and other facilities at the Sohae site. Last March, South Korea’s spy agency and some U.S. experts said that North Korea was restoring the facilities, raising doubts about whether it was committed to denuclearization. 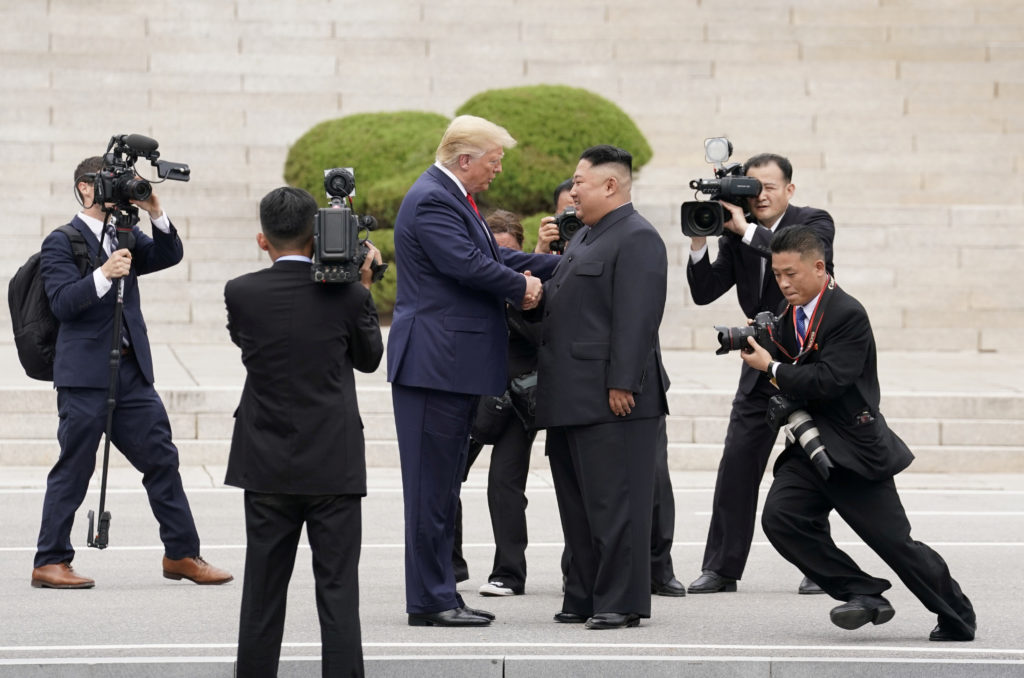 U.S.-North Korea diplomacy has largely remained deadlocked since the second summit between Trump and Kim in Vietnam in February due to disputes over how much sanctions relief the North must get in return for dismantling its key nuclear complex — a limited disarmament step.

North Korea has since warned that the U.S. must abandon hostile policies and come out with new acceptable proposals by the end of this year or it would take an unspecified new path. In recent months, North Korea has performed a slew of short-range missile and other weapons launches and hinted at lifting its moratorium on nuclear and long-range missiles.

North Korea said the results of Saturday’s test were submitted to the Central Committee of the ruling Workers’ Party. The North said last week that the Central Committee will hold a meeting in late December to discuss unspecified “crucial issues” in line with “the changed situation at home and abroad.”

At the United Nations, a statement released by North Korea’s U.N. ambassador, Kim Song, said Saturday that denuclearization had “already gone out of the negotiation table.”

The statement accused the Trump administration of persistently pursuing a “hostile policy” toward the country “in its attempt to stifle it.” The statement was a response to Wednesday’s condemnation by six European countries of North Korea’s 13 ballistic missile launches since May.

The North Korean diplomat accused the Europeans — France, Germany, Britain, Belgium, Poland and Estonia — of playing “the role of pet dog of the United States in recent months.”

“We regard their behavior as nothing more than a despicable act of intentionally flattering the United States,” the ambassador said.