KATHMANDU, Nepal — Family, friends and supporters welcomed a veteran Sherpa guide upon his return to Nepal’s capital on Saturday, days after his 24th climb of Mount Everest extended his record.

After flying back from Everest to Kathmandu, Kami Rita was greeted by the waiting crowd at the airport. His wife hugged him and the crowd covered him with a cream-colored scarf and offered him yogurt.

The brief celebration at the airport parking area with traditional drums was followed by Rita riding on a truck waving to supporters as they drove out of the airport.

He told reporters he was very happy but exhausted.

Rita reached Everest’s 8,850-meter (29,035-foot) peak on Tuesday, the second time he had climbed to the summit in a week. He also reached the top of the world’s highest peak on May 15, then returned to base camp before climbing again this past week. 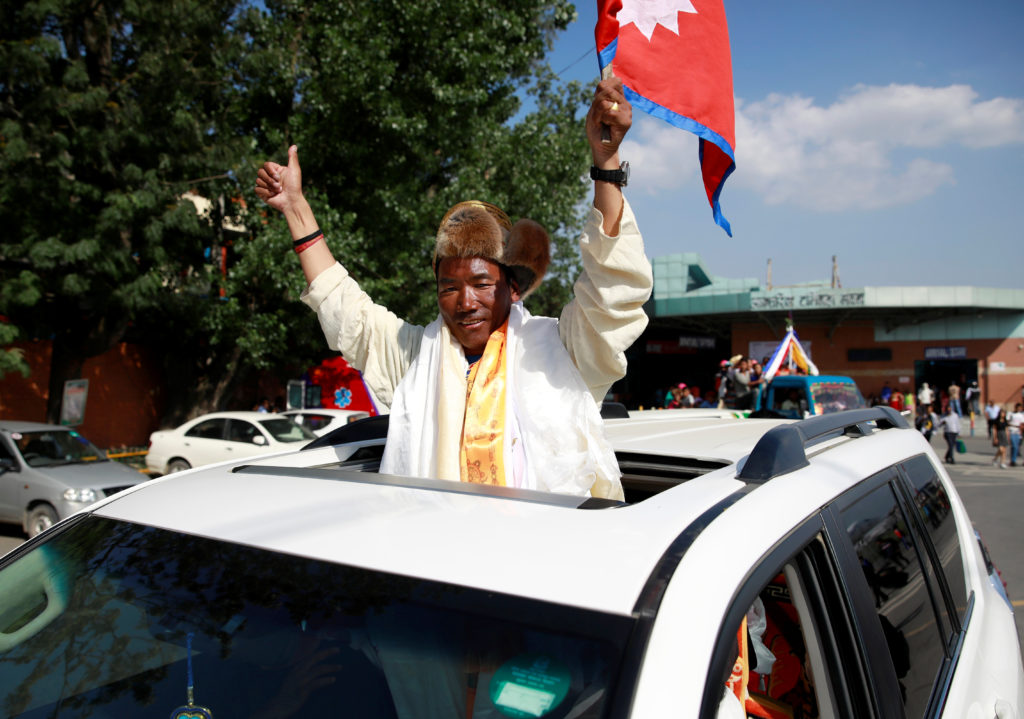 Kami Rita Sherpa, 49, a Nepali mountaineer waves towards media personnel upon his arrival after climbing Mount Everest for the 24th time, creating a new record for the most summits of the worldÕs highest mountain, in Kathmandu, Nepal May 25, 2019. Photo By Navesh Chitrakar/Reuters

The climbs bring Rita, 49, closer to his target of 25 ascents of Everest before he retires from high mountain climbing. His two closest peers have climbed Everest 21 times each, but both of them have retired from mountain climbing.

There are 41 teams with a total of 378 climbers permitted to scale Everest during the spring climbing season. An equal number of Nepalese guides are helping them get to the summit.

Rita first scaled Everest in 1994 and has been making the trip nearly every year since.

His father was among the first Sherpa guides employed to help climbers reach the summit, and Rita followed in his footsteps and then some. In addition to his two dozen summits of Everest, Rita has scaled some of the other highest mountains, including K-2, Cho-Oyu, Manaslu and Lhotse.

Sherpa tribespeople were mostly yak herders and traders living deep within the Himalayas until Nepal opened its borders in the 1950s. Their stamina and familiarity with the mountains quickly made them sought-after guides and porters.

Left: Kami Rita Sherpa, 49, a Nepali mountaineer, performs a religious ritual upon his arrival after climbing Mount Everest for the 24th time, creating a new record for the most summits of the world's highest mountain, in Kathmandu, Nepal on May 25. Photo by Navesh Chitrakar/Reuters