JERUSALEM — Israeli Prime Minister Benjamin Netanyahu on Monday survived a political showdown that had threatened to bring down his coalition and trigger early elections.

Netanyahu managed to persuade Education Minister Naftali Bennett, leader of the ultranationalist Jewish Home Party, to drop a threat to bolt the coalition. That left his government with a thin parliamentary majority and appeared to give the prime minister at least a few more months in office.

While Netanyahu can declare victory, the big winner of the crisis appears to be Hamas, the Islamic militant group that controls Gaza. Over the past week, Hamas has exposed major divisions in Israel over Gaza policy that could bring about the collapse of the governing coalition at any time.

Hamas has exposed major divisions in Israel over Gaza policy that could bring about the collapse of the governing coalition.

Israel and Hamas are bitter enemies who have fought three wars since the militant group seized control of the Gaza Strip in 2007. Israel and Egypt have maintained a tight blockade on Gaza to weaken Hamas, devastating the territory’s already fragile economy.

Since late March, Hamas has been leading mass demonstrations along Gaza’s perimeter fence in a bid to break the blockade. More than 170 Palestinians and an Israeli soldier have been killed in the weekly demonstrations. But in recent weeks, Egyptian and U.N. mediators had made progress toward an unofficial cease-fire that would ease the blockade in exchange for quieting the demonstrations.

That progress was upset last week when a botched Israeli military raid in Gaza set off two days of heavy fighting in which Palestinian militant groups fired some 460 projectiles, including an anti-tank missile that struck a bus, into Israel, while the Israeli air force struck dozens of targets in Gaza.

In all, 14 Palestinians, including 12 militants, were killed, while a Palestinian laborer working in Israel was killed by a Gaza rocket. 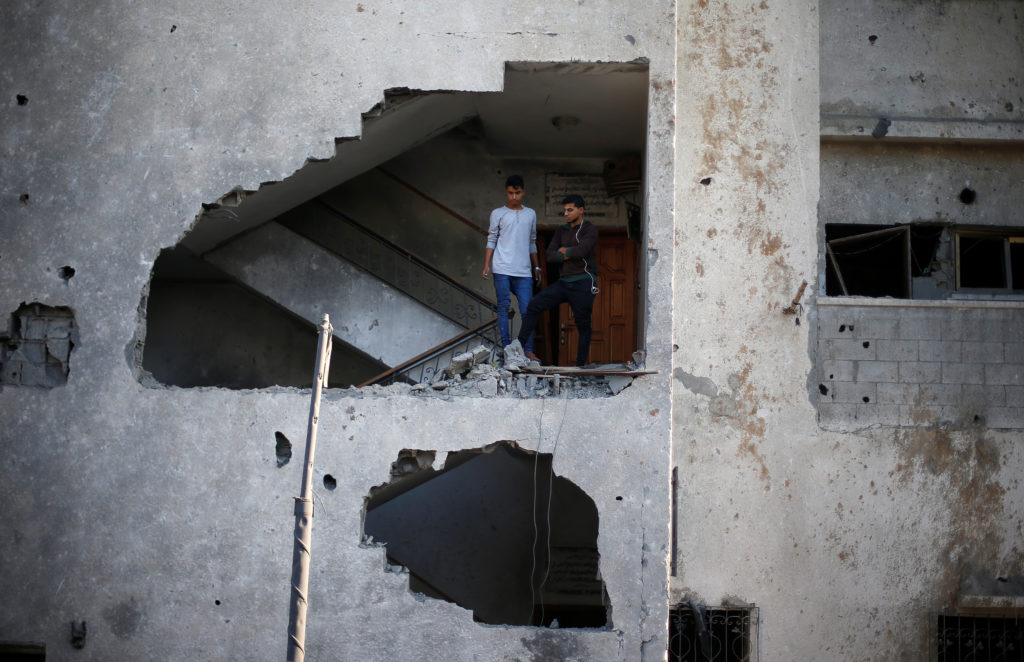 Palestinians look out of their house that was damaged in an Israeli airstrike, in Gaza City on Nov. 13, 2018. Photo by REUTERS/Suhaib Salem

Just as the sides were on the brink of another war, Egyptian mediators forged a truce to end the fighting. That set off a political crisis in Israel.

Defense Minister Avigdor Lieberman, who had favored a much tougher response, resigned in protest. Bennett, who also wanted tougher action, said he would resign if he was not given the defense portfolio.

Netanyahu on Sunday rejected Bennett’s ultimatum and took over the Defense Ministry, seeming to set the stage for his coalition to collapse. But in a last-minute about-face, Bennett backed down Monday and said he would give Netanyahu a chance to deal with Israel’s security challenges more firmly.

As opposition leader a decade ago, Netanyahu vowed to take a tougher line against Hamas than his predecessor, Ehud Olmert. But since taking office in early 2009, Netanyahu has concluded that toppling Hamas would require a lengthy military operation that would cost many lives.

Reluctant to pay such a price, he instead seems content to keep a weakened Hamas in check.

Keeping Gaza quiet benefits Netanyahu on several levels. Working-class border towns in southern Israel are considered strongholds of his ruling Likud Party. Netanyahu does not want an election at a time when his base is angry over the cease-fire.

Netanyahu also has long argued that Israel has more serious security concerns on its northern front — where Iranian forces are active in neighboring Syria and Hezbollah has amassed an arsenal of well over 100,000 rockets and missiles in Lebanon.

Yechiel Leiter, a former chief of staff for Netanyahu, said countering Iran is the “hallmark” of the prime minister’s agenda.

“Gaza is not an existential threat,” said Leiter, who is now a senior fellow at the Kohelet Policy Forum, a conservative think tank. “Iran is the overarching agenda playing behind the scenes.” That was why Netanyahu did not go “full throttle” against Hamas, he said. 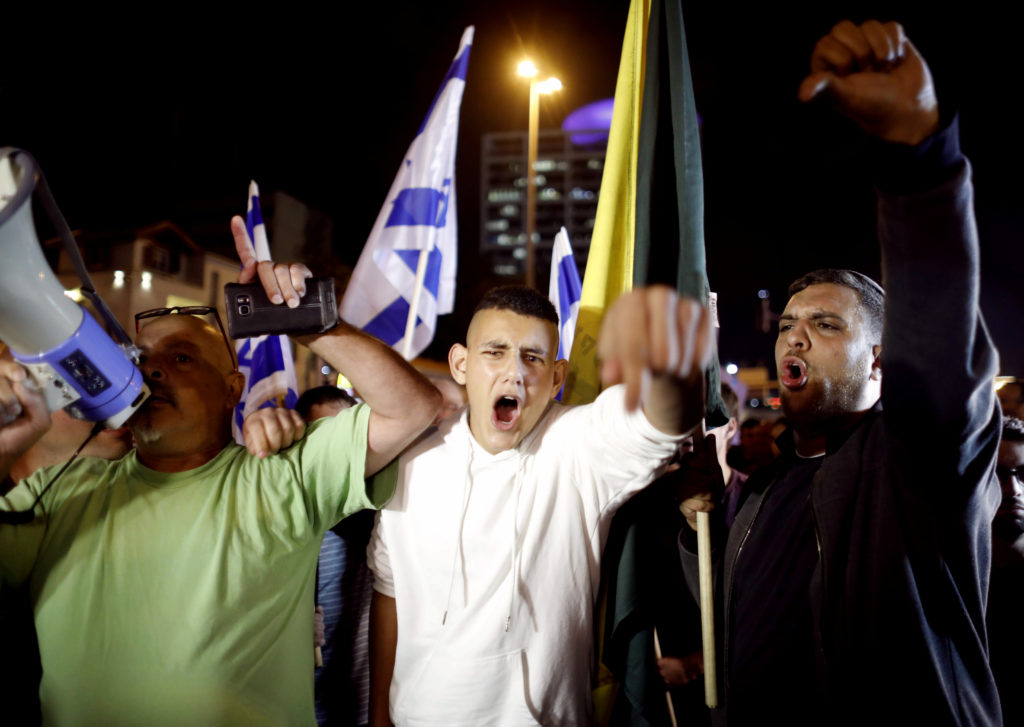 Israelis, mostly residents of southern Israel, take part in a protest against the ceasefire with Gaza, in Tel Aviv, Israel, on Nov. 15, 2018. Photo by REUTERS/Ammar Awad

Netanyahu may also have a deeper agenda.

Hamas seized control of Gaza from the internationally recognized Palestinian Authority in 2007, leaving President Mahmoud Abbas only governing parts of the West Bank.

By allowing Hamas to survive, Netanyahu is deepening the territorial and political split between the West Bank and Gaza. With the Palestinians weak and divided, there is little pressure for Netanyahu to make concessions, allowing him to expand West Bank settlements and solidify Israeli control over the territory.

Abbas fears Israel and the U.S. are collaborating on a peace plan that would cement this division, falling short of his demand for an independent Palestinian state that includes all of the West Bank and Gaza under his control.

Hamas has been riding high since the cease-fire. Suffering minimal casualties, it has enjoyed a boost in popularity with the Gaza public and is now working with Egyptian mediators toward expanding the cease-fire to ease the blockade. Any lift in the economy will deepen the group’s rule over Gaza.

In addition, Hamas showed that while it may not be able to defeat the Israeli military, it can disrupt life throughout southern Israel and put heavy pressure on Netanyahu.

Another barrage of rockets would almost certainly cause Netanyahu’s coalition to collapse or force him into a war that he doesn’t want. That should give Hamas additional leverage as the cease-fire talks proceed.

Reuven Hazan, a political scientist at Hebrew University, said Hamas has emerged as key factor in the next Israeli election campaign. “People in Gaza will be able to decide what issue we focus on, how much we focus on it, and whether the government is going to be looked upon favorably or not,” he said. 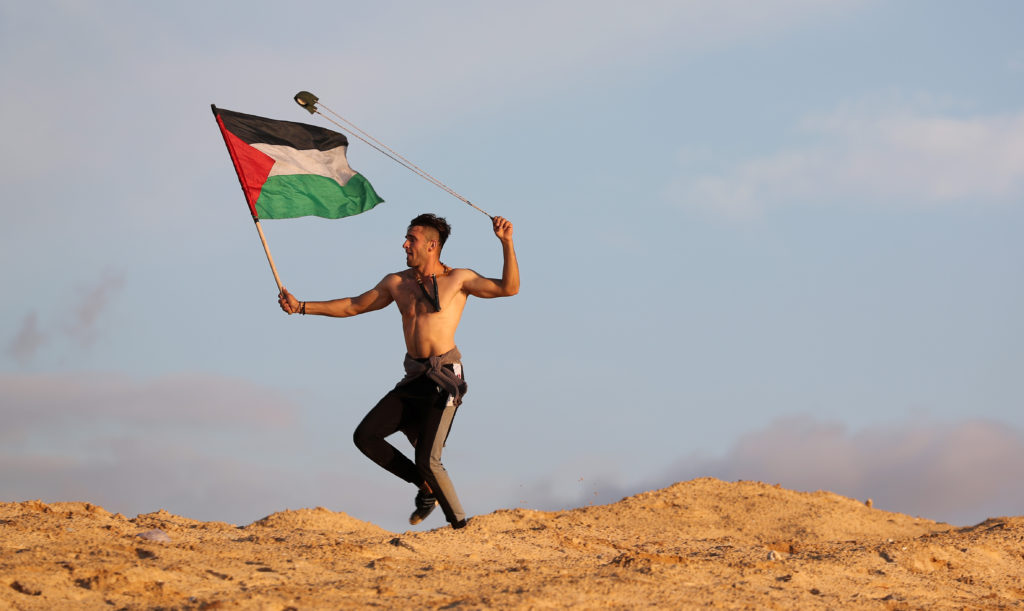 A demonstrator holding a Palestinian flag uses a sling to hurl stones at Israeli troops during a protest calling for lifting the Israeli blockade on Gaza, at the beachfront border with Israel, in the northern Gaza Strip on Nov. 5, 2018. Photo by REUTERS/Mohammed Salem

Another barrage of rockets would almost certainly cause Netanyahu’s coalition to collapse or force him into a war that he doesn’t want.

Netanyahu will have to proceed with caution. If cease-fire talks move forward and he makes concessions to Hamas, he could face a backlash from Bennett, who can bring down the coalition and force new elections at any time.

Its leader, Moshe Kahlon, has not issued any ultimatums. But the two men are scheduled to meet later in the week, meaning Netanyahu is not out of the woods yet.