Among the pirates who have scoured the seven seas, Blackbeard stands as history’s most notorious. Said to have captured two ships more than twice the size of his own, Blackbeard’s conquests have been told and retold for nearly three centuries, captivating countless imaginations. 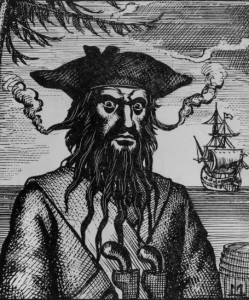 For so long, Blackbeard’s epic has been obscured by legend and popular lore. But recent documents discovered deep from within British, French and American archives and others, uncovered from the sands of the U.S. coast, have allowed scholars and historians to piece together much of the intrigue.

Based on this cache of new findings, Colin Woodard, author of “The Republic of Pirates: Being the True and Surprising Story of the Caribbean Pirates and the Man Who Brought Them Down,” the inspiration for NBC’s upcoming drama “Crossbones,” published an exclusive account of Blackbeard’s final days in the February issue of Smithsonian magazine.

Woodard’s account of Blackbeard’s last moments is one of loyalty, revenge and gore.

At the height of his pirating career, lasting no more than five years, according to Woodard, Blackbeard and his men reputedly had the Royal Navy on the run, disrupted the trans-Atlantic trade of nearly three empires and struck fear in the minds of statesmen from the Americas to Europe.

From their strategic base in Nassau, Bahamas, Blackbeard and his men were able to sail out into the heavily trafficked Florida Straits and carry back captured prizes to their fortified position.

Blackbeard was seen in his time by many ordinary people as a “Robin Hood” type figure, fighting against the status quo of a corrupt ruling class. Most of his men saw themselves as engaged in a type of social revolt, not simply banditry for profit.

And despite his pirate persona, Blackbeard had never killed a man.

That is until his fatal final battle with the Royal Navy, as chronicled in Woodard’s account.

In Blackbeard’s final days, he was living in Bath, a frontier colony where Governor Charles Eden of North Carolina was then living. The colony was in dire straits after attacks from local Indians left many dead. But Blackbeard and his men offered the colony protection and man-power, and in exchange, Eden offered them sanctuary. The infamous pirate settled there and even married a local girl.

Despite Blackbeard’s favorable relationship with Eden, many saw him as a threat — including Virginia Lt. Governor Alexander Spotswood. Keeping tabs on his whereabouts for months, Spotswood schemed with Royal Navy Lt. Robert Maynard to attack Blackbeard.

On Nov. 21, 1718, finally mired in a bloody battle near Ocracoke, the two crews shared deadly blows. Conceding defeat, Blackbeard ordered his ship to be brought alongside Maynard’s and walked aboard. Suddenly the two crews charged into hand-to-hand combat. According to records found from Maynard himself, Blackbeard fell “with five shot in him, and 20 dismal cuts.”

The famed pirate’s body was dumped in the Pamlico Sound in North Carolina, and his head was strung from the ship’s bowspirit. It was later given to Spotswood as a trophy.

Though questions remain, Woodard’s account sets much of the ledger straight.

The historic record has been updated just in time for Hugh Jackman to play Blackbeard in a Warner Brothers’ Peter Pan origin story, set for release in July 2015.