BELGRADE, Serbia — The white supremacist suspected in the mosque shootings that left at least 49 people dead in New Zealand had traveled to the Balkans in the past three years, where he toured historic sites and apparently studied battles between Christians and the Ottoman empire.

Authorities in Bulgaria, Turkey and Croatia have confirmed that the suspect, 28, had been to their countries in 2016-2018. Hungarian counterterrorism authorities also suggested that he had visited but revealed no other information, and local media in Bosnia reported a 2017 trip there.

While the details of his travels are sketchy, authorities in those countries said they are investigating his movements and any contacts he might have had with local people.

During his unprecedented, live-streamed shooting spree Friday in Christchurch, he exposed his apparent fascination with the religious conflicts in Europe and the Balkans — a volatile region that has been the site of some of Europe’s most violent clashes.

The suspect’s soundtrack as he drove to the Christchurch mosque included a nationalist Serb song from the 1992-95 Bosnian war that tore apart Yugoslavia. The song glorifies Serbian fighters and former Bosnian Serb political leader Radovan Karadzic — the man jailed at the United Nations war crimes tribunal in The Hague for genocide and other war crimes against Bosnian Muslims.

The suspect’s rifles contained the names of legendary Serbs and Montenegrins who fought against the 500-year-rule of the Muslim Ottomans in the Balkans, written in the Cyrillic alphabet used by the two Orthodox Christian nations.

In a 74-page manifesto that he posted on social media, the alleged shooter said he was a white supremacist who was out to avenge attacks in Europe perpetrated by Muslims.

While Serbia and Bosnia have not confirmed that he had visited, police in neighboring Croatia issued a brief statement Saturday saying he was in the country in December 2016 and January 2017. It was not known if his stay was continuous.

Croatia’s 24 sata (24 hours) news site said the suspect left Croatia by plane from the capital Zagreb on Jan. 18, 2017, after visiting the Adriatic coastal cities of Porec, Zadar, Sibenik and Dubrovnik, where he mostly stayed in hostels.

READ NEXT: When gunman advanced on New Zealand mosque, Abdul Aziz ran at him

“Until that moment yesterday (in New Zealand), that person was not in the focus of our institutions,” Croatian Prime Minister Andrej Plenkovic told reporters Saturday, according to the official HINA news agency.

In Bosnia, the local Klix.ba news portal reported that he arrived in that country from Montenegro in early January 2017.

Bulgaria’s chief prosecutor, Sotir Tsatsarov, said Friday that the alleged shooter last year rented a car and toured more than a dozen cities, visiting historic sites from Nov. 9 to Nov. 15. He was mainly interested in the battles between Christians and the Ottoman army, the prosecutor said.

The Interior Ministry said Bulgaria is coordinating with counterterrorism teams from various countries, including the United States, over the suspect. An investigation has been launched into whether he had contacts with local citizens, authorities said.

“So far, we do not have any evidence that (he) had been involved in terror activities during his stay in Bulgaria,” the Interior Ministry’s chief secretary, Ivaylo Ivanov, said.

He said police are checking all places and all people he possibly contacted during his weeklong stay in the country last November.

Turkey is also investigating the suspect’s movements during his two reported visits to the country that straddles Europe and Asia and who had three citizens injured in Friday’s slaughter. 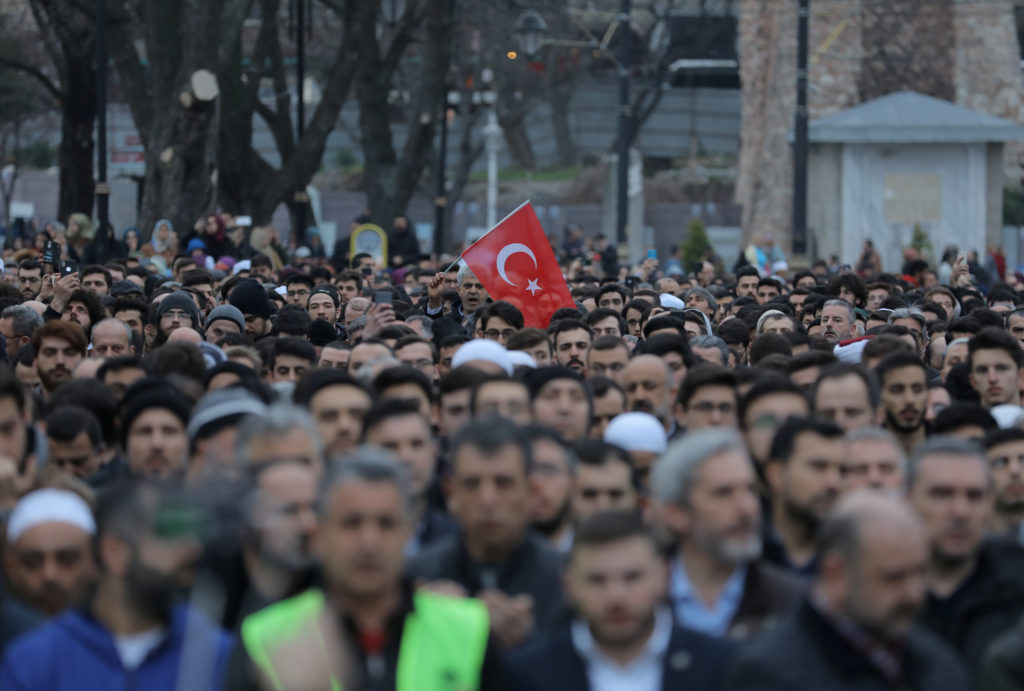 Demonstrators pray during a protest against the Christchurch mosque attack in New Zealand, in front of the Hagia Sophia in Istanbul, Turkey March 16, 2019. Photo by Huseyin Aldemir/Reuters

State broadcaster TRT says he visited Turkey twice in 2016 — on March 17-20 and from Sept. 13 to Oct. 25. The station released a security camera image of him arriving at Istanbul’s Ataturk Airport.

Hungary’s Counter-Terrorism Center suggested in an email to The Associated Press that he also visited there, saying they are cooperating with other countries to “fully examine the circumstances of (the suspect’s) Hungarian trip and stay.”

“The details and phases of this process — for understandable reasons — are not public,” the center said.

In Bosnia, many residents said the massacre in New Zealand and the alleged shooter’s mention of Karadzic, who has been convicted of genocide, have brought back their own horrific memories of the Bosnian war, which killed more than 100,000 people.

“This (attack) is more proof that Karadzic’s ideology is a motive for killings and terrorism,” said Adel Sabanovic, a Muslim from the Bosnian capital of Sarajevo and a survivor of the 1995 Srebrenica massacre in which Bosnian Serb troops killed some 8,000 Muslim boys and men. “It must be condemned in strongest possible terms.”

A YouTube video for the song that the alleged shooter played in his car on the way to gunning people down at the mosque in Christchurch shows emaciated Muslim prisoners in Serb-run detention camps during the war. “Beware Ustashas and Turks,” says the song, using wartime, derogatory terms for Bosnian Croats and Bosnian Muslims used by Serb nationalists.

Serbian President Aleksandar Vucic said the New Zealand shooting is “a terrible crime conducted by a psychopath.” He criticized foreign and domestic media for somehow implying that Serbs should be blamed for the crime because of the gunman’s “taste for music.”

Pablo Gorondi contributed from Hungary and Veselin Toshkov from Bulgaria.

Left: Demonstrators wave a Turkish flag during a protest against the Christchurch mosque attack in New Zealand, in front of the Hagia Sophia in Istanbul, Turkey March 16, 2019. Photo By Huseyin Aldemir/Reuters