ADDIS ABABA, Ethiopia — A jetliner carrying 157 people crashed shortly after takeoff from the Ethiopian capital Sunday, killing everyone aboard, authorities said. At least 35 nationalities were among the dead.

It was not clear what caused the Ethiopian Airlines plane to go down in clear weather. But the accident was strikingly similar to last year’s crash of a Lion Air jet that plunged into the Java Sea, killing 189 people. Both crashes involved the Boeing 737 Max 8, and both happened minutes after the jets became airborne.

The Ethiopian pilot sent out a distress call and was given clearance to return to the airport, the airline’s CEO told reporters.

Worried families gathered at the flight’s destination, the airport in Nairobi, the capital of neighboring Kenya.

Agnes Muilu said he came to pick up his brother. “I just pray that he is safe or he was not on it,” he said.

Relatives were frustrated by the lack of information about loved ones.

“Why are they taking us round and round. It is all over the news that the plane crashed,” said Edwin Ong’undi, who was waiting for his sister. “All we are asking for is information to know about their fate.”

The accident is likely to renew questions about the 737 Max, the newest version of Boeing’s popular single-aisle airliner.

Indonesian investigators have not determined a cause for the October crash, but days after the accident Boeing sent a notice to airlines that faulty information from a sensor could cause the plane to automatically point the nose down. The notice reminded pilots of the procedure for handling such a situation.

The Lion Air cockpit data recorder showed that the jet’s airspeed indicator had malfunctioned on its last four flights, though the airline initially said problems with the aircraft had been fixed before it left the Indonesian capital of Jakarta.

Safety experts cautioned against drawing too many comparisons between the two crashes until more is known about Sunday’s disaster.

The Ethiopian Airlines CEO “stated there were no defects prior to the flight, so it is hard to see any parallels with the Lion Air crash yet,” said Harro Ranter, founder of the Aviation Safety Network, which compiles information about accidents worldwide.

As sunset approached at the crash site, searchers could be seen walking through the wreckage of the plane, which shattered into small pieces. A bulldozer was nearby.

Photos from the scene showed multicolored pieces of the jet strewn across freshly churned earth. Red Cross teams and others were searching a large area for human remains. In one photo, teams could be seen loading black plastic bags into trucks.

The airline published a photo showing its CEO standing in the wreckage.

The Ethiopian plane was new, having been delivered to the airline in November.

State-owned Ethiopian Airlines is widely considered the best-managed airline in Africa and calls itself Africa’s largest carrier. It has ambitions of becoming the gateway to the continent and is known as an early buyer of new aircraft. 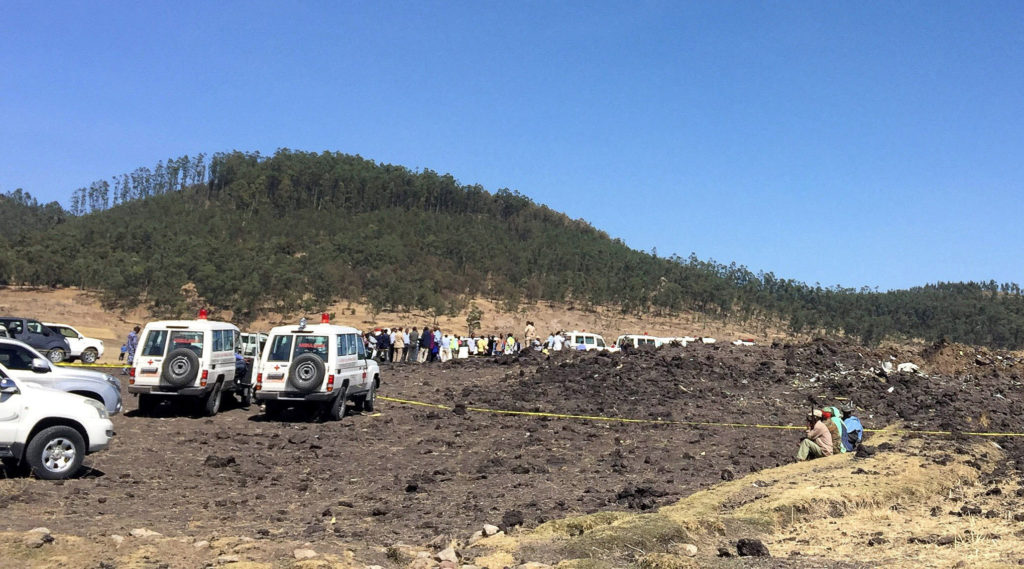 A general view shows the scene of the Ethiopian Airlines Flight ET 302 plane crash, near the town of Bishoftu, southeast of Addis Ababa, Ethiopia March 10, 2019. Photo by Tiksa Negeri/Reuters

“Ethiopian Airlines is one of the safest airlines in the world. At this stage we cannot rule out anything,” CEO Tewolde Gebremariam said.

The airline said 149 passengers and eight crew members were thought to be on the plane.

Ethiopian Airlines issued a list showing 35 nationalities among the dead, including 32 Kenyans and 18 Canadians. The list reflected a broad range of backgrounds, with passengers from China, the United States, Saudi Arabia, Nepal, Israel, India and Somalia. Several countries lost more than five citizens.

Some of those aboard were thought to be traveling to a major United Nations environmental meeting scheduled to start Monday in Nairobi.

The plane crashed six minutes after departing, plowing into the ground at Hejere near Bishoftu, or Debre Zeit, some 50 kilometers (31 miles) south of Addis Ababa, at 8:44 a.m.

The Addis Ababa-Nairobi route links East Africa’s two largest economic powers and is popular with tourists making their way to safaris and other destinations. Sunburned travelers and tour groups crowd the Addis Ababa airport’s waiting areas, along with businessmen from China and elsewhere.

The jet’s last maintenance was on Feb. 4, and it had flown just 1,200 hours. The pilot was a senior aviator, joining the airline in 2010, the CEO said.

The Boeing 737 Max 8 was one of 30 being delivered to the airline, Boeing said in a statement in July when the first was delivered.

Boeing said a technical team was ready to provide assistance at the request of the U.S. National Transportation Safety Board.

The last deadly crash of an Ethiopian Airlines passenger flight was in 2010, when a plane went down minutes after takeoff from Beirut, killing all 90 people on board.

PM Abiy also promised #Ethiopia/n Airlines employees to buy shares from the new Skyline Hotel inaugurated today. In his speech he challenged @flyethiopian to build a new terminal-Airport City with a capacity of 100 million passengers in Bishoftu-45km from Addis. @Landoforigins pic.twitter.com/5Ks5bX1fKn

African air travel, long troubled and chaotic, has improved in recent years, with the International Air Transport Association in November noting “two years free of any fatalities on any aircraft type.”

Sunday’s crash comes as Ethiopia’s reformist prime minister, Abiy Ahmed, has vowed to open up the airline and other sectors to foreign investment in a major transformation of the state-centered economy.

Ethiopian Airlines’ expansion has included the recent opening of a route to Moscow and the inauguration in January of a new passenger terminal in Addis Ababa to triple capacity.

Speaking at the inauguration, the prime minister challenged the airline to build a new “Airport City” terminal in Bishoftu — where Sunday’s crash occurred.

Left: A woman reacts as she waits for the updated flight information of Ethiopian Airlines Flight ET 302, where her fiance was onboard at the Jomo Kenyatta International Airport (JKIA) in Nairobi, Kenya March 10, 2019. Photo by Baz Ratner /Reuters