SEOUL, South Korea — North Korean leader Kim Jong Un warned Saturday that his country would “fully mobilize” its nuclear force if threatened as he took center stage at a military parade in which the country unveiled what appeared to be a new intercontinental ballistic missile and other additions to its growing weapons arsenal.

Kim, however, avoided direct criticism of Washington during the event, which celebrated the 75th anniversary of the country’s ruling party and took place less than four weeks before the U.S. presidential election. Instead, he focused on a domestic message urging his people to remain firm in the face of “tremendous challenges” posed by the coronavirus pandemic and crippling U.S.-led sanctions over his nuclear program.

Kim described the North’s continuing efforts to develop its nuclear deterrent as necessary for its defense and said it wasn’t targeting any specific country with its military force.

But “if any force harms the safety of our nation, we will fully mobilize the strongest offensive might in a pre-emptive manner to punish them,” he said. 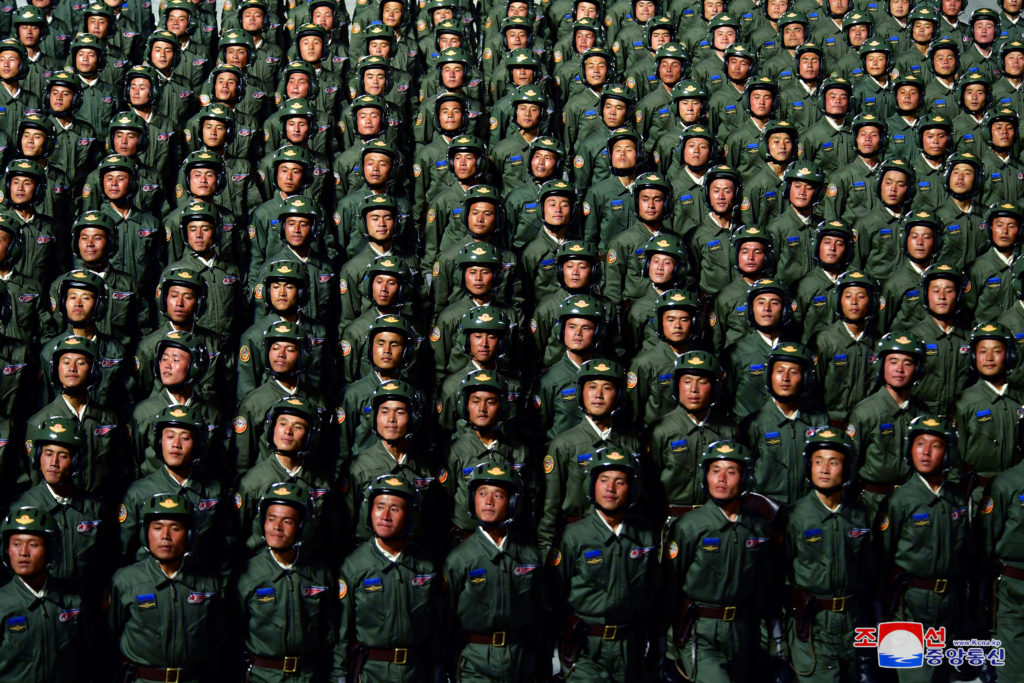 North Korea celebrates the 75th anniversary of the founding of the ruling Workers’ Party of Korea, in this image released by North Korea’s Central News Agency on October 10, 2020. KCNA via REUTERS.

The weapons included what was possibly the North’s biggest-yet ICBM, which was mounted on an 11-axel launch vehicle that was also seen for the first time. The North also displayed a variety of solid-fuel weapon systems, including what could be an advanced version of its Pukguksong family of missiles designed to be fired from submarines or land mobile launchers.

The missiles highlighted how the North has continued to expand its military capabilities amid a stalemate in nuclear negotiations with the Trump administration.

Kim had previously expressed frustration over the slow diplomacy, pledging in December that he would continue to bolster his nuclear arsenal in the face of U.S. pressure and soon unveil a “new strategic weapon to the world.” He then said the North was no longer obligated to maintain a self-imposed suspension on nuclear weapon and ICBM tests, which President Donald Trump touted as a major foreign policy achievement.

The probable ICBM paraded Saturday was clearly the new strategic weapon Kim had promised to show, said Melissa Hanham, deputy director of the Austria-based Open Nuclear Network. North Korea had already demonstrated a potential ability to reach deep into the U.S. mainland with a flight test of its Hwasong-15 ICBM in 2017, and developing a larger missile possibly means the country is trying to arm its long-range weapons with more warheads, she said. 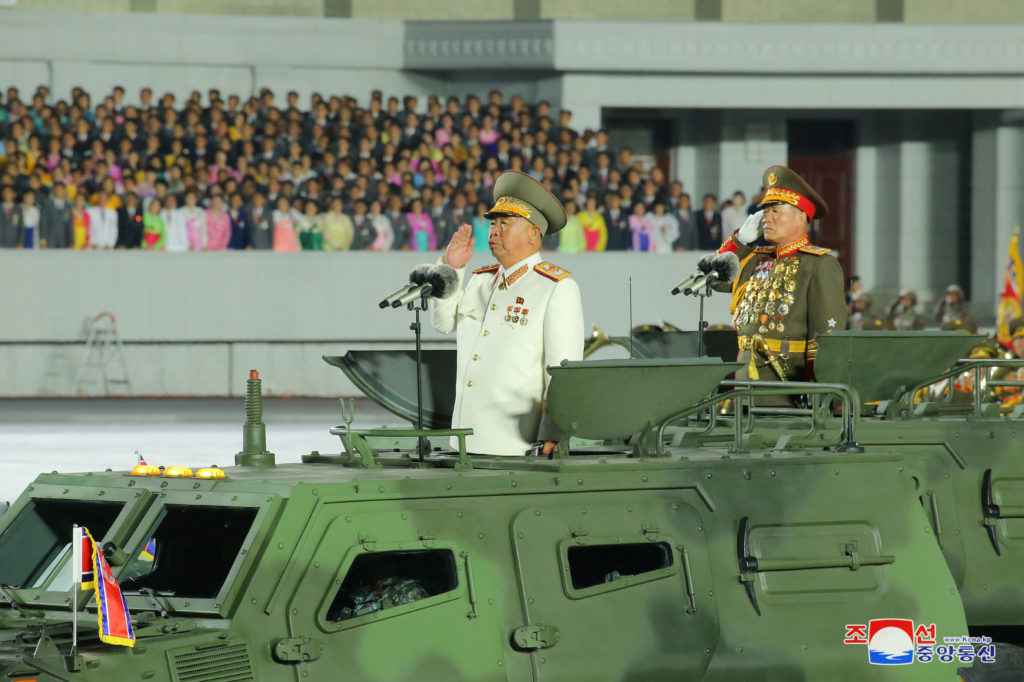 North Korea celebrates the 75th anniversary of the founding of the ruling Workers’ Party of Korea, in this image released by North Korea’s Central News Agency on October 10, 2020. KCNA via REUTERS.

“North Korea is pushing ahead with its nuclear strategy regardless of the tough year that it has had with regard to diplomatic talks, flooding from typhoons and COVID-19,” Hanham said in a telephone interview. “I also think that this is a message to the United States — he has already declared he no longer holds himself to the moratorium and he has something new as well he may wish to test.”

The celebratory event, which began late Friday, was not broadcast by North Korean state television until Saturday evening, when it aired a taped broadcast.

Goose-stepping troops were seen marching in the streets in front of a brightly illuminated Kim Il Sung Square, as a military band performed while moving in formation, shaping “10.10,” “1945,” and “2020” in honor of the party anniversary.

The performers and tens of thousands of spectators roared as Kim, dressed in a gray suit and tie, appeared from a building as the clock struck midnight. Kim, flanked with senior officials and smiling widely, waved to the crowd and kissed children who presented him with flowers before taking his spot on a balcony.

During his speech, Kim repeatedly thanked his “great people” for overcoming “unexpected” burdens and thoroughly abiding by the anti-virus measures imposed by the ruling party and government to keep the country COVID-19-free, a claim that has been widely questioned by outside observers. He also extended an olive branch to rival South Korea, expressing hope that the countries could repair bilateral ties once the threat of the pandemic is over. The North had suspended virtually all cooperation with the South amid the stalemate in larger nuclear negotiations with the United States.

After his speech, Kim waved and watched with binoculars as the military hardware was rolled out in the square. He saluted as fighter jets flew in formation above head, using fireworks to form the Workers’ Party’s symbol — a hammer, brush and sickle — and the number 75 in the sky. 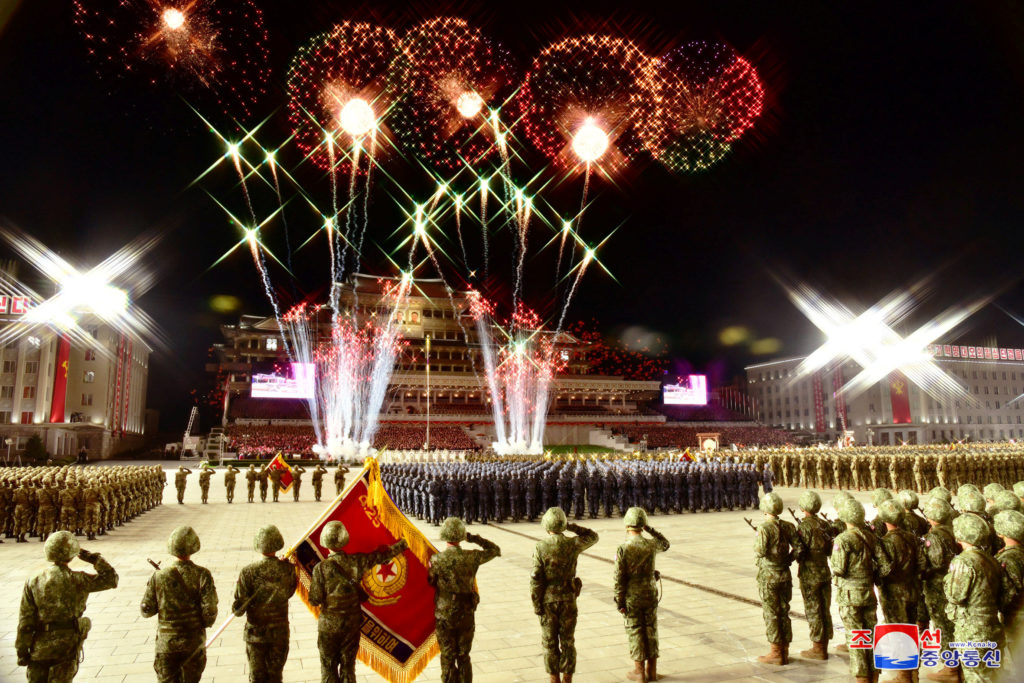 Fireworks are seen during a parade to mark the 75th anniversary of the founding of the ruling Workers’ Party of Korea, in this image released by North Korea’s Central News Agency on October 10, 2020. KCNA via REUTERS.

Earlier Saturday, masked citizens lined up to lay flowers at the statues of Kim Il Sung and Kim Jong Il, the father of the current ruler, at Pyongyang’s Mansu Hill. A huge street poster read “Best glory to our great party.”

The North’s official Korean Central News Agency said residents in Kaesong and other regions who had lost their homes to recent natural disasters marked the party anniversary by moving into newly built houses and that they praised Kim Jong Un for looking after them as “their father.”

This year’s anniversary comes amid deadlocked nuclear negotiations with the Trump administration and deepening economic woes that analysts say are shaping up as one of the biggest tests of Kim’s leadership since he took power in 2011.

But many analysts believe North Korea will avoid serious negotiations or provocations before the U.S. presidential election because of the chance that the U.S. government could change.

Authoritarian North Korea is keen about anniversaries, and this week’s festivities were earmarked for years in advance as a major event to glorify Kim’s achievements as leader.

But there hasn’t been much to celebrate lately as Kim struggles to keep afloat an economy crippled by years of stringent U.S.-led sanctions over his nuclear program and ravaged further this year by border closures amid the COVID-19 pandemic and devastating summer floods and typhoons that will likely worsen chronic food shortages.

Kim and Trump have met three times since embarking on high-stakes nuclear diplomacy in 2018. But talks have faltered over disagreements on disarmament steps and the removal of sanctions imposed on North Korea.

Left: Military vehicles are seen during a parade to mark the 75th anniversary of the founding of the ruling Workers' Party of Korea, in this image released by North Korea's Central News Agency on October 10, 2020. KCNA via REUTERS