JUBA, South Sudan — Emboldened by a new peace deal, civil war-torn South Sudan says it will resume oil production in a key region next month to make up for more than $4 billion of revenue lost during years of fighting.

South Sudan, with Africa’s third-largest oil reserves, will renew drilling in northern Unity State for the first time since the fields were destroyed when the conflict began in late 2013.

South Sudan, with Africa’s third-largest oil reserves, will renew drilling in northern Unity State for the first time since the fields were destroyed when the conflict began in late 2013, oil ministry officials told The Associated Press.

The goal is to have all five locations there operational by the end of the year and working alongside the oil fields in Upper Nile State, which operated throughout the civil war.

South Sudan’s economy is almost entirely dependent on exports of oil from its 3.5 billion barrels of reserves. Most of the oil rigs were shut down or destroyed by the civil war. The fighting that killed tens of thousands of people has also devastated the economy and sent prices for everyday items soaring.

Oil was central to South Sudan’s potential when it won independence from Sudan in 2011. In the seven years before the civil war began, oil brought in more than $13 billion in revenue, according to the finance ministry.

South Sudan’s government is optimistic about the resumed production, even attributing the peace deal signed early this month to the country’s reserves.

However, that peace is fragile. This week South Sudan’s opposition briefly refused to sign the final peace agreement because of outstanding issues. It accused the government of using oil revenues to buy weapons, ammunition and politicians to undermine the peace, said opposition spokesman Mabior Garang de Mabior.

The goal of resuming oil production in Unity State is to help increase South Sudan’s total output of 130,000 barrels per day to almost 300,000, which could bring in about $5 billion over the next few years, Chuang said. Another part of the goal is increasing Upper Nile State’s output to 200,000 barrels per day. 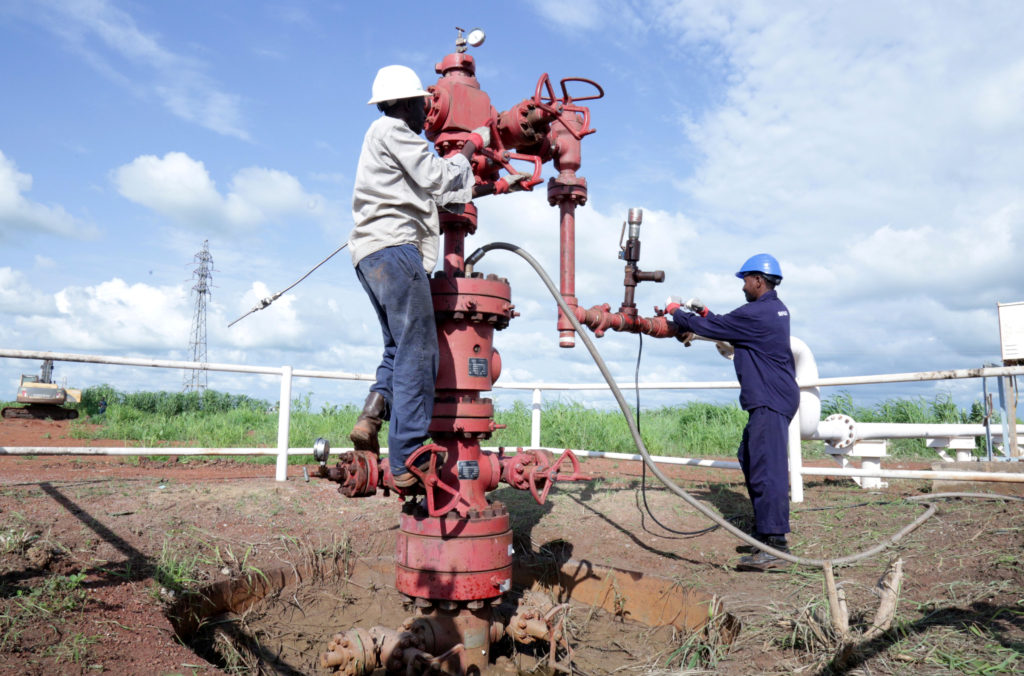 Workers are seen at an oil well at the Toma South oil field to Heglig, in Ruweng State, South Sudan August 25, 2018. Photo by Jok Solomun/Reuters

The new peace deal was brokered by Sudan, which has a vested interest in its neighbor’s oil production. As part of the initial agreement when South Sudan gained independence Sudan was entitled to more than $3 billion of oil revenue, $1.2 billion of which is still owed, South Sudan’s oil ministry said.

The government also hopes to attract investors during the second local Africa Oil & Power conference in November in the capital, Juba.

While industry experts say the prospects look promising, some say efforts will be futile if the fighting resumes.

“There is enormous pressure to ensure that the peace deal holds and that Sudan and other neighbors play a big role in enforcing and ensuring peace,” said NJ Ayuk, founder and CEO of Centurion Law Group and chair of the African Energy Chamber of commerce.

Currently there’s great interest from Asian, African and Eastern European countries looking to “defy the odds” and operate in a difficult environment as there’s still a lot more oil to be found in South Sudan, he said.

READ NEXT: Why reporting from South Sudan is so difficult — and critically needed

At least one oil group said it feels confident the situation in northern Unity State is secure enough to resume production.

“We’ve been to the field many times and have done assessments and there have been no incidents. Peace has come,” said Angelo Chol Dongway, vice president for the Greater Pioneer Operating Company, a consortium of four oil companies licensed to operate there. They are the China National Petroleum Corporation, India-based Oil and Natural Gas Corporation, the Malaysia-based Petronas and South Sudan’s state-owned NilePet.

Other international investors aren’t as convinced.

“It sounds hopeful but internal politics, legal and economic stability have to be demonstrated,” said an oil industry consultant for a large company who spoke on condition of anonymity because the consultant wasn’t authorized to speak on the record.

South Sudan’s oil sector has faced scrutiny by the international community for its alleged lack of transparency and use of state oil revenue to fuel the civil war.

Earlier this year the U.S. government placed sanctions on 15 of South Sudan’s oil-related entities, including NilePet and the oil ministry, in an attempt to stem the flow of “corrupt official actors” using revenue to buy weapons and fund militias.

Some advocacy groups worry that the increased production could bring more corruption.

“Without stringent processes of accountability, well-connected politicians and their commercial collaborators are likely to cart this money away,” said Brian Adeba, deputy director of policy at the Enough Project, a Washington-based advocacy group.

“This corruption in turn becomes an incentive for more violence against the state as aggrieved groups seek redress and a seat at the looting trough through the barrel of the gun.”