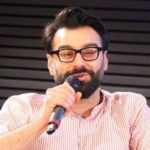 Opinion: There’s more to Iran’s protests than you’ve been told

This week marks the 39th anniversary of the proclamation of the Islamic Republic of Iran in the wake of what it calls the “Islamic Revolution” – a state-imposed Islamization of what had been a truly pluralistic revolution in 1977–79. At the turn of the year, triggered by economic hardships, Iran witnessed the most politicized protests in its almost four-decade-old history.

Reaching an unprecedented geographical scope, tens of thousands of mostly “middle-class poor” in their twenties – an urban precariat that is socioeconomically deprived but has middle-class aspirations and qualifications – took to the squares of mainly small cities to voice their anger.

This group of people was conventionally considered to be part of the regime’s social base. Just a week after the uprising broke out and covered all corners of the country, many of the media lost interest in their coverage, announcing a farewell in the wake of staged, pro-regime demonstrations that followed the eruption. However, due to the state’s myriad forms of repression and the lack of active involvement by other strata of society, popular rage was merely pushed below the surface where it has been simmering ever since. 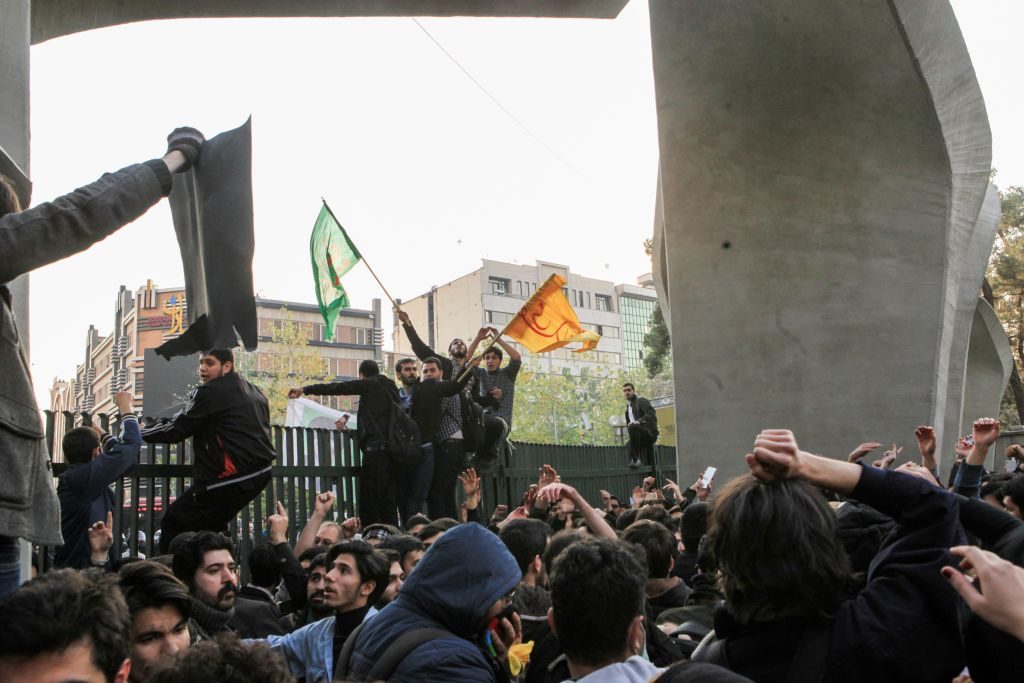 To understand the protests, it’s necessary to analyze the slogans chanted by the protesters. Over the past two centuries, Iranians have stood up against tyrannical rule almost every decade. Few other nations in modern history have so often fought for their rights, with slogans incarnating their political ambitions gaining prominence as during the 1977–79 Iranian Revolution or more recently the 2009 Green Movement.

Despite their heterogeneity, the slogans of the 2017/2018 Iranian Rebellion can be categorized into three thematic areas: Social justice, critique of the ruling establishment, and the linking between Iran’s regional interventionism and its domestic shortcomings. These slogans, many of them rhyming in Persian, do in fact overlap.

Some commentators – from conservatives in Iran to Western analysts uncritical toward the Hassan Rouhani administration – have interpreted the protests as merely reflecting Iranians’ desire for a better economic performance. Yet, the slogans tell a different story, one that inevitably showcases the interlocking of socioeconomic and political grievances, which after all are intimately intertwined in the Islamic Republic.

“Bread, job, freedom” // “The people are begging, the clerics act like God” // “Capitalist mullahs, give us our money back” // “Thieves plunder, the government supports them”

Despite uncertainty over the exact level of poverty in Iran, it is fair to assume that almost half of the population lives around the poverty line – in a country where the official minimum wage is below that line. Poverty and inequality have been driving the protests, with socioeconomic demands at their forefront. Those who demonstrate have pushed against corruption, unemployment, and the accumulation of wealth in the hands of a few.

A year ago, photographs of the homeless sleeping in empty graves shocked the nation, while Tehran’s regime-affiliated super-rich have started to obscenely display their wealth.

Recent official figures alone on the socioeconomic misery of half of Iranians are unsettling, while the real numbers may be even higher: 40 percent live under the poverty line; 30 percent of young people (20–24 years) are unemployed, with 90 percent of protesters arrested under 25; and half of the work force affected by irregular employment; 10 million Iranians, out of a total population of 80 million, live in slums – i.e. almost as many as in the megalopolis Tehran; and around the same number lack basic insurance.

A year ago, photographs of the homeless sleeping in empty graves shocked the nation, while Tehran’s regime-affiliated super-rich have started to obscenely display their wealth. What would happen if those slum-dwellers also stood up the next time around?

But why does such an objectively rich country as Iran witness such amplitude of social misery? In fact, the Islamic Republic constitutes an oligarchy, where wealth is monopolized and controlled by the hands of a tiny élite. On one hand, there are the economic empires of the Islamic Revolutionary Guards Corps and the religious foundations, run by both the establishment’s conservatives and reformists. Supreme Leader Ayatollah Ali Khamenei alone is believed to control a financial empire worth $95 billion. On the other, President Rouhani has deepened the neoliberal economic policies that were introduced by his mentor and late President Ali-Akbar Hashemi-Rafsanjani in the 1990s and pursued ever since. This has included clientelistic privatizations and the redistribution of wealth from the bottom to the top, and more recently Rouhani’s austerity budgets. 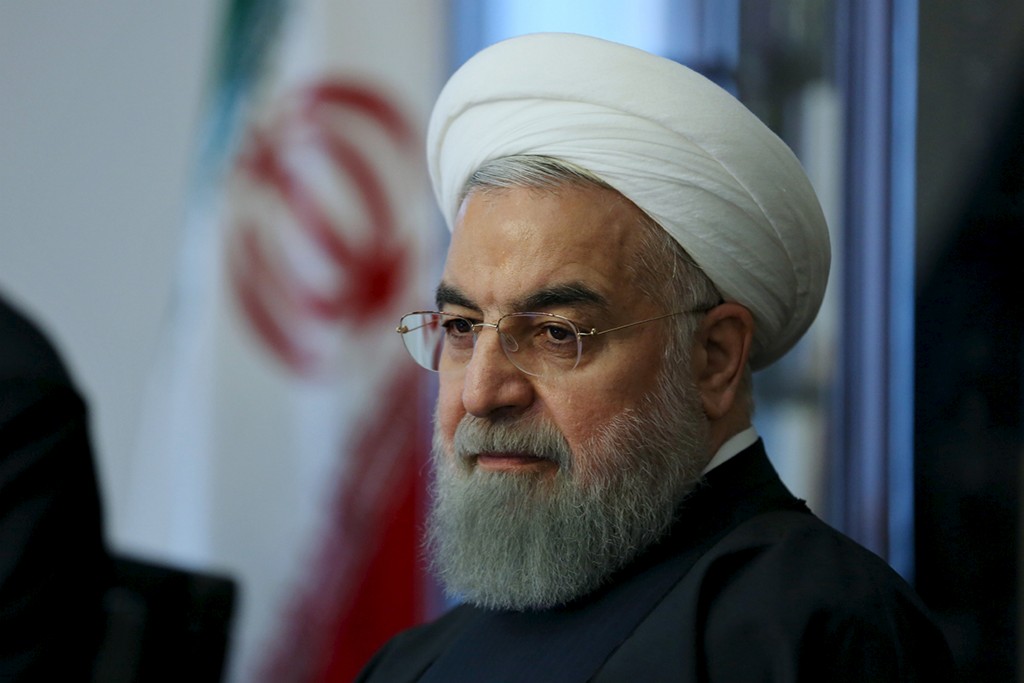 In contrast to President Rouhani’s promises, the nuclear deal’s economic benefits have not reached average Iranians. A year ago, it was reported that about 80 percent of the post-deal business accords went to state and semi-state entities. Under Rouhani, income inequality and relative poverty have risen – the latter especially in smaller cities, the hotbed of the rebellion. Not surprisingly, all those factors fueled social frustration.

Questioning the entire élite: Rage against the regime

“Seyyed Ali [Khamenei], pardon us, it’s time [for you] to leave” // “Down with Khamenei” // “Down with the dictator” // “Down with Rouhani” // “We don’t want to be ruled by clerics” // “Sepah [IRGC] are traitors” // “Reformist, Principlists [right-wing conservatives]: The game is over” // “Islamic Republic, no more, no more” // “We neither want Mir [Hossein Mousavi] nor a [Supreme] Leader, we neither want bad nor worse”

Through these slogans and chants protesters directly targeted the entire system of the Islamic Republic, in its clerical and military components. In contrast to the Green Movement, the élite’s reformist section has not been spared. People’s anger has been directed at all wings of the Islamic Republic’s establishment and the bogus choice they face in presidential elections where only candidates loyal to the regime are on the ballot — thus the choice between the lesser and larger evil. All factions have been accused of not caring for the people’s needs and of having time and again betrayed their hopes in one presidential election after another.

All factions have been accused of not caring for the people’s needs and of having time and again betrayed their hopes in one presidential election after another.

In this vein, it was also chanted “Referendum, referendum, this is the slogan of the people.” In an interview given during the rebellion, Tehran University politics professor and public intellectual Sadegh Zibakalam said if a referendum on the future of the Islamic Republic was held today, more than 70 percent would say no – from all walks of life.

“Leave Syria alone and deal with us” // “Neither Gaza nor Lebanon, my life for Iran” // “Both Gaza and Iran: Down with the tyrants”

Widely ignored by Western media, Iran’s expansive regional policies have faced increasing criticism at home over the last few years. For instance, courageous students spoke out against regime representatives’ spurious arguments about the motivations for Iran’s heavy intervention in Syria constituting a “war on terror” or claiming to defend holy shrines.

Tehran’s apparent priority to position itself as the region’s undisputed great power is juxtaposed with its neglect of the population’s needs at home. Instead, these slogans call for the billions spent on the Lebanese Hezbollah, the Syrian dictator Bashar al-Assad and Islamist groups in Gaza to be devoted to plug the many holes in Iran itself.

Amid the myriad of slogans chanted, one echoing those of the Arab Spring stands out in particular: “Bread, job, freedom” (nân, kâr, âzâdi). It is precisely this rallying cry combining socioeconomic and political demands that strikes the very heart of the Islamic Republic – and makes it tremble. For this slogan targets both sides of the same coin within a regime whose various factions monopolize economic and political power – ultimately questioning the entire system.

It is precisely this rallying cry combining socioeconomic and political demands that strikes the very heart of the Islamic Republic – and makes it tremble.

Despite the opportunistic efforts to co-opt the uprising by some shady foreign-based Iranian opposition groups such as the monarchists led by the former Crown Prince of Iran and, even worse, the PMOI (also known as MKO) cult, both supported by some pro-“regime change” U.S. neoconservatives, slogans in support of these figures and groups were respectively almost nonexistent or totally missing. In other words, Iranians are longing for a political alternative beyond the past and present ones, all of them reactionary.

The very conditions that led to the uprising – neoliberal economic policies and political authoritarianism – prevailing, the next eruption is only a matter of time. After the state crackdown and the arrest of 4,000 protesters (some of whom died of torture), the protests focused on the prisons.

This revolt against the 1979 revolution’s broken promises is reminiscent of the precious words in Langston Hughes’ famous poem “Harlem”:

The next explosion against those dreams deferred might indeed be heavier.

Ali Fathollah-Nejad is a visiting fellow at the Brookings Institution in Doha. Previously, he was a postdoctoral associate with the Iran Project of the Harvard Kennedy School’s Belfer Center for Science and International Affairs. He holds a Ph.D. in international relations and development studies from the School of Oriental and African Studies (SOAS), University of London.