Iran is seeing some of its largest protests since the Green Movement that demanded the removal of President Mahmoud Ahmadinejad in 2009. Below is a timeline of the recent demonstrations.

Protests erupt in Mashhad, Iran’s second most-populous city in the northeast, over the high prices of basic goods and a stagnant economy. Police disperse protesters with water cannons and make some arrests.

The demonstrations against President Hassan Rouhani’s government spread to dozens of other cities, including Qom, Isfahan, Zahedan and Tehran. Thousands decry Iran’s economic hardships, high unemployment and inflation, and alleged corruption of officials.

President Donald Trump begins a series of tweets about the protests: “Many reports of peaceful protests by Iranian citizens fed up with regime’s corruption & its squandering of the nation’s wealth to fund terrorism abroad. Iranian govt should respect their people’s rights to express themselves. The world is watching! #IranProtests”

Two protesters are killed in western Iran, and about 200 people are arrested in the capital Tehran.

Reports emerge that authorities in Iran have shut off the internet in some parts of the country. The White House issues a statement saying, “We support the right of the Iranian people to express themselves peacefully. Their voices deserve to be heard. We encourage all parties to protect this fundamental right to peaceful expression and to avoid any actions that contribute to censorship.”

Rouhani, who won reelection in May, vowed the nuclear deal would spur economic growth, but many Iranians say it is taking too long. Iran’s unemployment rate is 12.5 percent, according to the CIA World Factbook, putting it 136th out of 217 countries. (The U.S. is 66th with a 4.9 percent unemployment rate.)

The nuclear deal raised expectations that quality of life would improve, and economic frustrations have boiled over, said Karim Sadjadpour, a senior fellow at the Carnegie Endowment for International Peace, on the PBS NewsHour. “In a place like Iran, which is not only politically authoritarian, but also economically and socially authoritarian, all of that has really come out.”

The “gradual grind of double-digit unemployment, double-digit inflation, no prospects of economic improvement, the remarkable cronyism, recent publication of budget figures that show millions of dollars have been given to religious endowments that have done virtually nothing to contribute, all of that I think created a tipping point,” said Abbas Milani, director of the Iranian Studies program at Stanford University.

Watch Milani’s full interview in the above video.

Amir Ahmadi Arian, an Iranian author and journalist, wrote in an opinion column for The New York Times that Iran has seen protests over economic grievances before, but what makes these current ones different is the government can no longer rely on the support of people in rural areas. “The rich now heedlessly flaunt their wealth,” emphasizing the economic divide.

Iran’s Supreme Leader Ayatollah Ali Khamenei speaks publicly about the protests for the first time, blaming “enemies of Iran” for the unrest.

U.S. Ambassador to the U.N. Nikki Haley calls for emergency meetings with the U.N. Security Council and Human Rights Council. “The Iranian government is being tested by its own citizens,” she says in a statement. “We pray that freedom and human rights will carry the day.”

President Trump tweets: “The people of Iran are finally acting against the brutal and corrupt Iranian regime. All of the money that President Obama so foolishly gave them went into terrorism and into their ‘pockets.’ The people have little food, big inflation and no human rights. The U.S. is watching!”

In August 2016, the Obama administration acknowledged paying $1.3 billion to Iran for interest on a payment Iran made to the United States in the 1970s for military equipment that the U.S. never delivered. 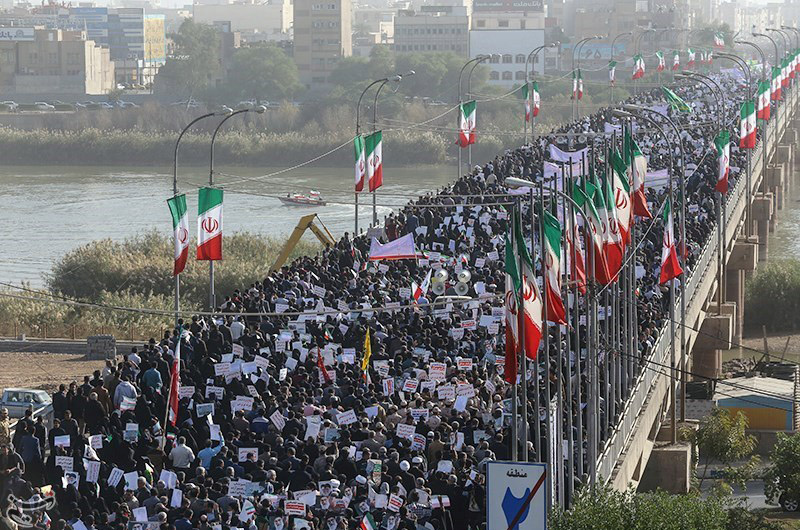 Pro-government rallies in Iran aim to counter a week’s worth of anti-government demonstrations. At least 21 people have been killed and 450 people arrested.

Iran’s Revolutionary Guards deploy forces to three provinces to quell the protests, according to their commander Maj. Gen. Mohammad Ali Jafari. He declares the unrest has come to an end.

Trump tweets another message to Iran: “Such respect for the people of Iran as they try to take back their corrupt government. You will see great support from the United States at the appropriate time!”

CBS News reported “sporadic, small uprisings” around the country, though the presence of security forces “appeared to have largely restored order.”

Vice President Mike Pence wrote in an opinion column for The Washington Post that the United States is “standing with” the protesters, and he urged other nations to do the same. “Unfortunately, many of our European partners, as well as the United Nations, have thus far failed to forcefully speak out on the growing crisis in Iran. It’s time for them to stand up.”

Pro-government rallies continue for a third day after Friday prayers, in response to more than a week of anti-government demonstrations. Tehran’s prayer leader urges authorities to deal “firmly” with the protest leaders.

“But those ordinary Iranians who were deceived by these American-backed rioters should be dealt based on Islamic clemency,” cleric Ahmad Khatami says at Tehran university.