Over 800 dead in Indonesia quake and tsunami; toll may rise

PALU, Indonesia — Rescuers struggled Sunday to reach victims in several large coastal towns in Indonesia that were hit by an earthquake and tsunami, and authorities feared that the toll of more than 800 confirmed dead would rise.

With the area largely cut off by damaged roads and downed communications lines, military and commercial aircraft were delivering some aid and supplies to the hard-hit city of Palu on the island of Sulawesi, and others in the region.

But there was a desperate need for heavy equipment to reach possible survivors buried in collapsed buildings, including an eight-story hotel in Palu where voices were heard in the rubble. A 25-year-old woman was found alive during the evening in the ruins of the Roa-Roa Hotel, according to the National Search and Rescue Agency, which released photos of the her lying on a stretcher covered in a blanket. 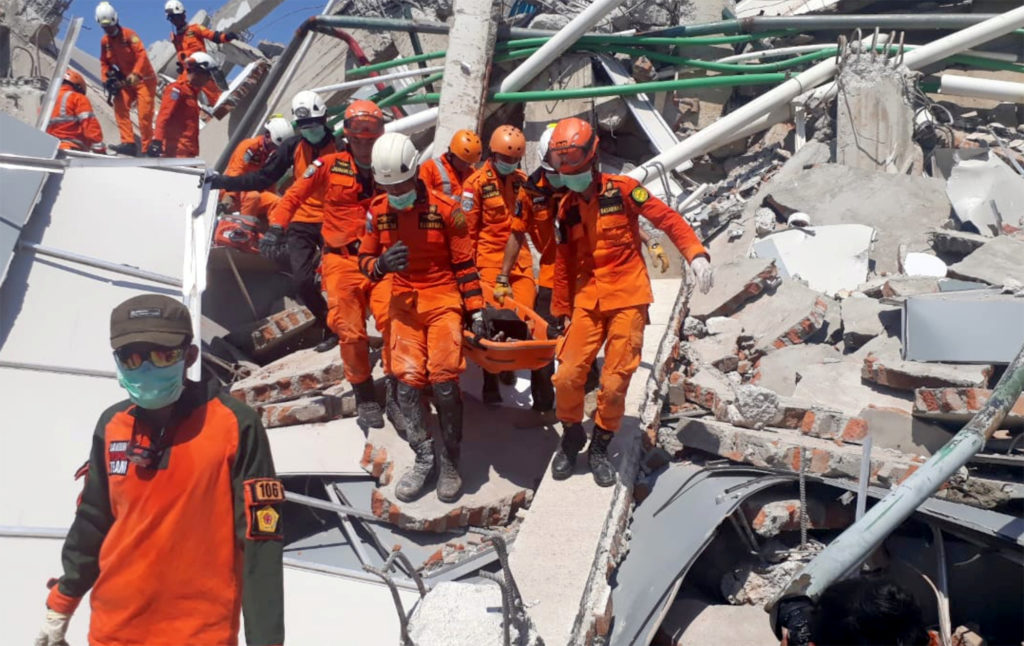 A search and rescue team evacuates a victim from the ruins of the Roa-Roa Hotel in Palu, Central Sulawesi, Indonesia September 30, 2018 in this photo taken by Antara Foto. Photo by Antara Foto/BNPB via Reuters

At least 832 people were confirmed killed by the quake and tsunami that struck Friday evening, Indonesia’s disaster agency said, with nearly all of those from Palu. The regencies of Donggala, Sigi and Parigi Moutong — with a combined population of 1.2 million — had yet to be fully assessed.

“The death toll is believed to be still increasing, since many bodies were still under the wreckage, while many have not been reached,” said disaster agency spokesman Sutopo Purwo Nugroho.

Bodies covered in blue and yellow tarps lined the streets of Palu, and officials said they were digging a mass grave for at least 300 of the dead.

It was not immediately known when the burial would take place, but “this must be done as soon as possible for health and religious reasons,” said Willem Rampangilei, head of the National Disaster Mitigation Agency. Most of Palu’s residents are Muslim.

The cries from beneath the Roa-Roa Hotel, which appeared to have toppled over with its walls splintered like pickup sticks, went silent by Sunday afternoon. Officials had estimated about 50 people could be inside.

“We are trying our best. Time is so important here to save people,” said Muhammad Syaugi, head of the national search and rescue team. “Heavy equipment is on the way.” 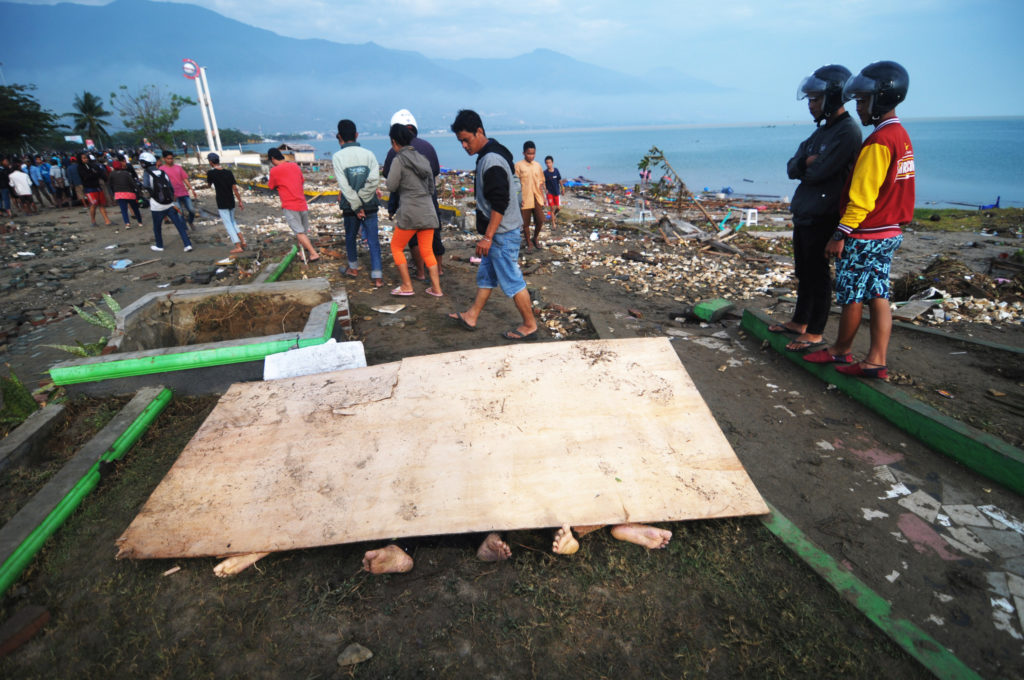 People walk past victims of earthquake and tsunami in Palu, Central Sulawesi, Indonesia September 29, 2018 in this photo taken by Antara Foto. Photo by Antara Foto/Zainuddin MN via Reuters

Metro TV showed about a dozen rescuers in orange jumpsuits climbing over debris with a stretcher carrying the body of a victim from the modest business hotel.

Other rescuers worked to free a 15-year-old girl trapped under concrete in her house in Palu after it collapsed on her family during the magnitude 7.5 earthquake that spawned a tsunami.

Unable to move her legs under the rubble, Nurul Istikharah was trapped beside her dead mother and niece. Rescuers also tried to control water from a leaking pipe, fearing she would drown.

Istikharah was unconscious during part of the effort to free her, but rescuers kept talking to her to try to keep her awake. Others offered her food and water.

Indonesian President Joko “Jokowi” Widodo toured Palu on Sunday and said rescuers were having difficulty reaching victims because of a shortage of heavy equipment.

“There are many challenges,” Jokowi said. “We have to do many things soon, but conditions do not allow us to do so.” 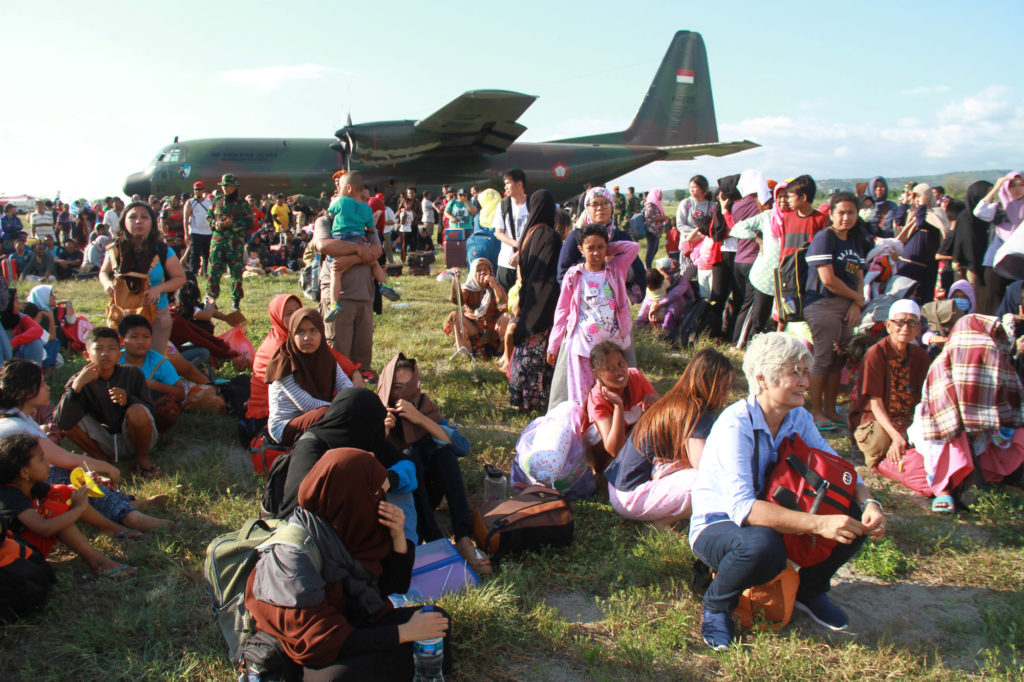 Local residents affected by the earthquake and tsunami wait to be airlifted out by military planes at Mutiara Sis Al Jufri Airport in Palu, Central Sulawesi, Indonesia September 30, 2018 in this photo taken by Antara Foto. Photo by Antara Foto/Zainuddin MN via Reuters

It was the latest natural disaster to hit Indonesia, which is frequently struck by earthquakes, volcanic eruptions and tsunamis because of its location on the “Ring of Fire,” an arc of volcanoes and fault lines in the Pacific Basin. In December 2004, a massive magnitude 9.1 earthquake off Sumatra island in western Indonesia triggered a tsunami that killed 230,000 people in a dozen countries. More recently, a powerful quake on the island of Lombok killed 505 people in August.

In Donggala, the site closest to the epicenter of Friday’s earthquake, aerial footage on Metro TV showed the sugary blond sands of beaches swept out to sea, along with some buildings. Some buildings in the town were severely damaged, with plywood walls shredded and chunks of concrete scattered on the pavement. Much of the damage, however, appeared limited to the waterfront.

Palu, which has more than 380,000 people, was strewn with debris from the earthquake and tsunami. A heavily damaged mosque was half submerged and a shopping mall was reduced to a crumpled hulk. A large bridge with yellow arches had collapsed.

The city is built around a narrow bay that apparently magnified the force of the tsunami as the waves raced into the tight inlet. Nugroho, the disaster agency spokesman, said waves were reported as high as 6 meters (20 feet) in some places.

Looters hit a badly damaged shopping mall, apparently unconcerned for their safety amid ongoing aftershocks and the structure’s questionable stability.

In one devastated area in Palu, residents said dozens of people could still be buried in their homes.

“The ground rose up like a spine and suddenly fell. Many people were trapped and buried under collapsed houses. I could do nothing to help,” resident Nur Indah said, crying. “In the evening, some of them turned on their cellphones just to give a sign that they were there. But the lights were off later and the next day.”

Nugroho said 61 foreigners were in Palu at the time of the disaster. Most were accounted for, but one South Korean was believed to be trapped in the Roa-Roa Hotel, while three others from France and one from Malaysia were missing. The survivors were to be evacuated to the Sulawesi city of Makassar in the island’s far south.

Communications with the area were difficult because power and telecommunications were cut, hampering rescue efforts. Most people have slept outdoors, fearing strong aftershocks.

Indonesia is a vast archipelago of more than 17,000 islands that span a distance that would stretch from New York to London. It is home to 260 million people. Roads and infrastructure are poor in many areas, making access difficult in the best of conditions.

The disaster agency has said that essential aircraft can land at Palu’s airport, though AirNav, which oversees aircraft navigation, said the runway was cracked and the control tower damaged.

Sulawesi has a history of religious tensions between Muslims and Christians, with violent riots erupting in the town of Poso, not far from Palu, two decades ago. Indonesia is the world’s most populous Muslim country.

Left: Search and rescue workers evacuate an earthquake and tsunami survivor trapped in a collapsed restaurant, in Palu, Central Sulawesi, Indonesia September 30, 2018 in this photo taken by Antara Foto. Antara Foto/Muhammad Adimaja/ via REUTERS ATTENTION EDITORS - THIS IMAGE WAS PROVIDED BY A THIRD PARTY. MANDATORY CREDIT. INDONESIA OUT. NO COMMERCIAL OR EDITORIAL SALES IN INDONESIA. - RC1C22327080