Egypt President Abdel-Fattah el-Sisi called for a state of emergency on Palm Sunday after suicide bombers killed dozens of people at two Coptic Christian churches in attacks claimed by the Islamic State.

The first blast ripped through mass at St. George’s Church in Tanta, about 50 miles north of Cairo, killing 27 and injuring 78, according to the Associated Press.

“After the explosion, everything became dark from the smoke,” said Edmond Edward, according to the AP. He was attending services with his brother, Emil, who was wounded.

“Deacons were the first to run out of the church. Many of them had blood on their white robes,” Susan Mikhail, whose apartment balcony across the street has a view of the church and its front yard, told the AP. 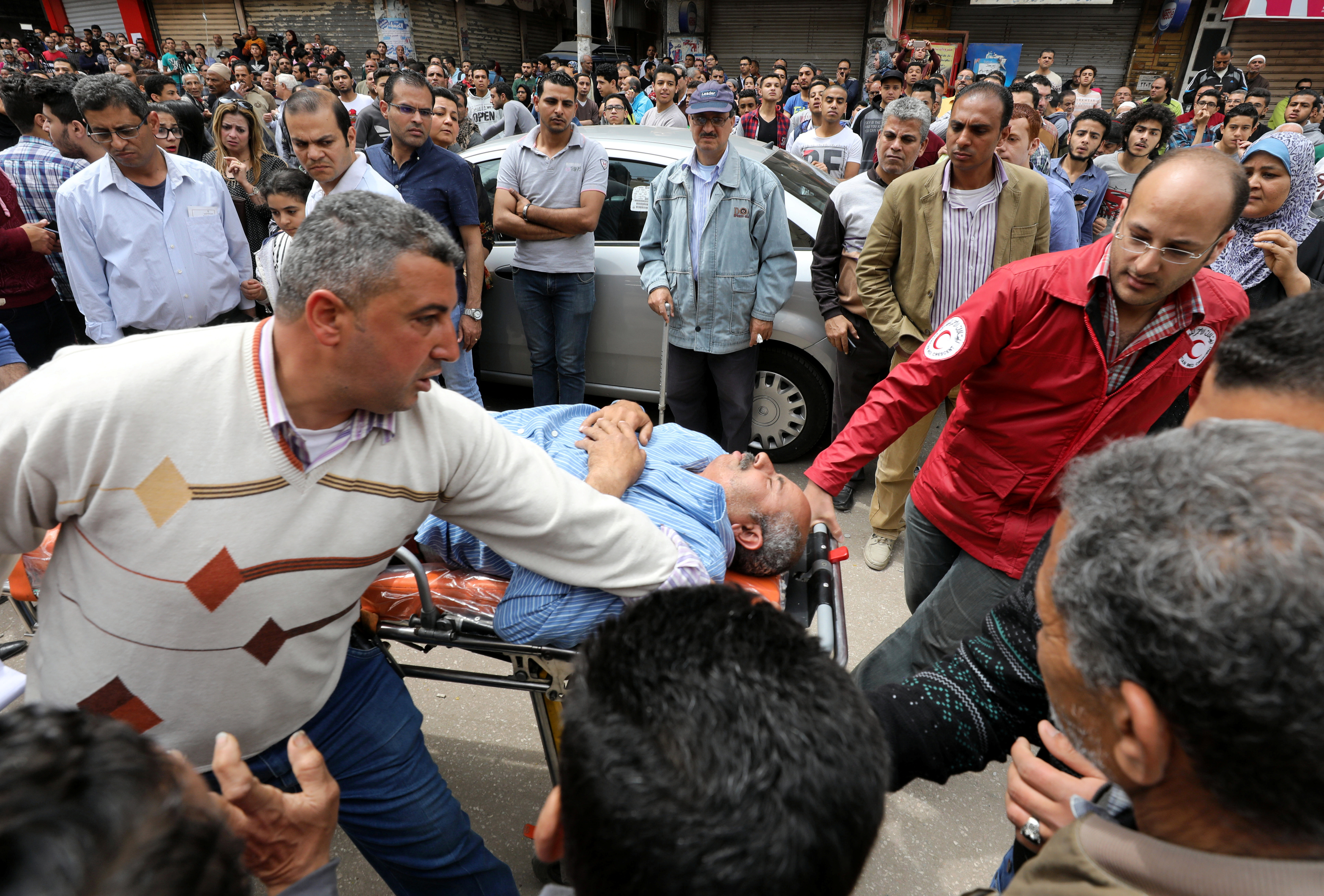 A victim is seen on a stretcher after a bomb went off at a Coptic church in Tanta, Egypt, April 9, 2017. Photo by Mohamed Abd El Ghany/Reuters

Sisi initially ordered for the deployment of military troops to protect vital facilities across the country, according to Reuters. Then he accused countries, without specifying which ones, of contributing to Egypt’s instability and called for a three-month state of emergency, according to the AP.

“Egyptians have foiled plots and efforts by countries and fascist, terrorist organizations that tried to control Egypt,” he said.

Egypt’s Parliament must vote in favor of the emergency, according to the constitution.

The explosions are the latest in a series of ongoing attacks against the religious minority group by Islamic extremists.

Egypt was predominately Christian until the Arab conquest of Egypt, which began in the 7th century, spread Islam in the area. Now Sunni Muslims form the majority religion in Egypt, while Christians, mostly Orthodox Copts, account for about 10 percent of the country’s population of about 94 million.

The community has been the target of terrorist attacks for decades, but especially since the Arab Spring uprising in 2011. Within a year of Mohammed Morsi of the Muslim Brotherhood rising to power, he was ousted by a military coup d’état backed by the Coptic Pope, bringing another wave of violence toward the Copts.

Dozens of their churches were burned in the fallout and Copts who had the money applied for asylum in other countries.

Their persecution has also extended to other countries such as Libya and Sudan.

Then in February, after a series of killings, hundreds of Coptic Christians fled the Sinai Peninsula, an area where the army has been battling violence since the Arab Spring.

Human rights activists have said Sisi, who is backed by the religious minority, has failed to protect them.

Pope Francis, who is planning a visit at the end of the month, has said in the past that attacks on Christians in the Middle East are a form of “genocide.” Marking Palm Sunday in St. Peter’s Square on Sunday, he shared his condolences.

“[W]e pray for the victims claimed this [Sunday] morning,” he said. “I pray for the dead and the injured, and I am close in spirit to the family members [of the deceased and injured] and to the entire community.”

Turkey and the U.S. also joined the international condemnation. President Donald Trump said in a tweet that he has “great confidence” that Sisi “will handle the situation properly.”

And the U.S. Department of State issued a statement calling the attacks “barbaric,” saying the U.S. “will continue to support Egypt’s security and stability in its efforts to defeat terrorism.”

Left: A relative of one of the victims reacts after a church explosion killed at least 21 in Tanta, Egypt, April 9, 2017. Photo by Mohamed Abd El Ghany/Reuters