LONDON — Prime Minister Boris Johnson’s provocative decision to suspend the British Parliament for a time before the country’s deadline for leaving the European Union came under fire Saturday in London and other cities where protesters took to the streets.

The demonstrations were called ahead of what is expected to be a pitched debate in Parliament this week as Johnson’s opponents scramble to try to pass legislation that would block him from carrying out Brexit on Oct. 31 without an approved withdrawal agreement.

An estimated 10,000 people gathered in central London, while others protested in in Belfast, York and others cities to show determination to block a “no deal” Brexit. Protesters in London briefly blocked traffic on a downtown bridge and in Trafalgar Square. 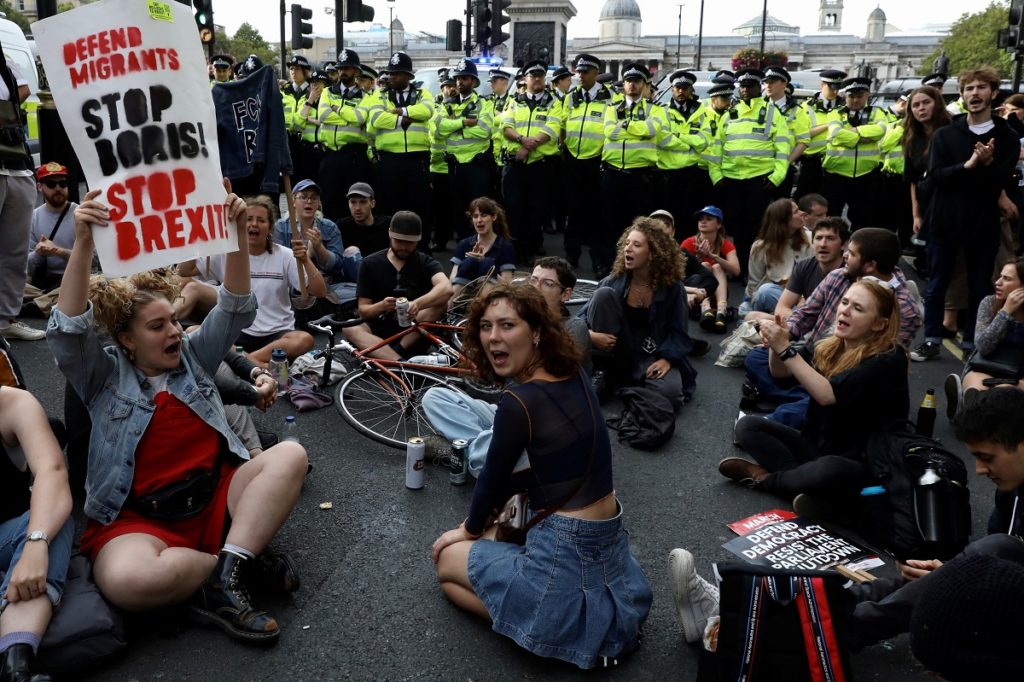 Demonstrators block the entrance to Whitehall during an anti-Brexit protest in London, Britain August 31, 2019. Photo by Kevin Coombs/ Reuters

Labour Party leader Jeremy Corbyn, who had urged his supporters to come out in large numbers, told thousands of people at a rally in Glasgow, Scotland that the message to Johnson was simple: “No way. It’s our Parliament.”

Corbyn said Johnson, who became prime minister through a vote of Conservative Party members instead of a general election, does not have a mandate for shutting down Parliament or for leaving the EU without a deal in place. Many economists and academics think a no-deal Brexit would lead Britain into a prolonged recession.

Johnson’s decision to shutter Parliament for several weeks when a debate about Brexit plans had been expected galvanized angry crowds of protesters on Saturday.

Organizers said protests were held in more than 30 locations throughout England, Scotland, Wales and Northern Ireland. 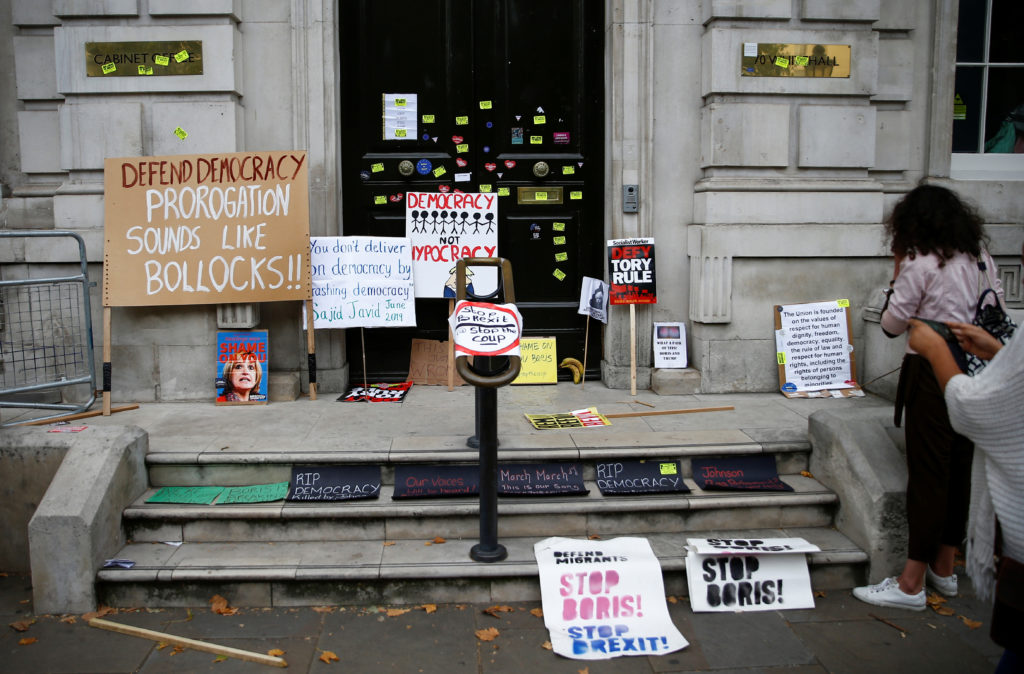 Stickers and placards are seen attached to the Cabinet Office door during a anti-Brexit protest, at Westminster in London, Britain, August 31, 2019. Photo by Henry Nicholls/ Reuters

In London, they chanted: “Boris Johnson, shame on you.” Some carried signs saying: “Stop the Coup” in reference to what they say is a move that threatens democracy.

The protests were organized by the anti-Brexit group Another Europe Is Possible and by Momentum, which is allied with the opposition Labour Party. The group is urging its membership to “occupy bridges and blockade roads.”

In Exeter in western England, pharmacist Bridie Walton, 55, said she was attending the first demonstration of her life.

“Nobody voted for a dictatorship,” she said, condemning Johnson’s suspension of Parliament. “These are the actions of a man who is afraid his arguments will not stand scrutiny.”

Johnson’s plan is also being opposed by some in Parliament who plan to introduce legislation this week to try to prevent a disorderly departure from the European Union.

Their task will be made more difficult if Johnson’s plan to shut Parliament for part of the time period before the Oct. 31 Brexit deadline is carried out. 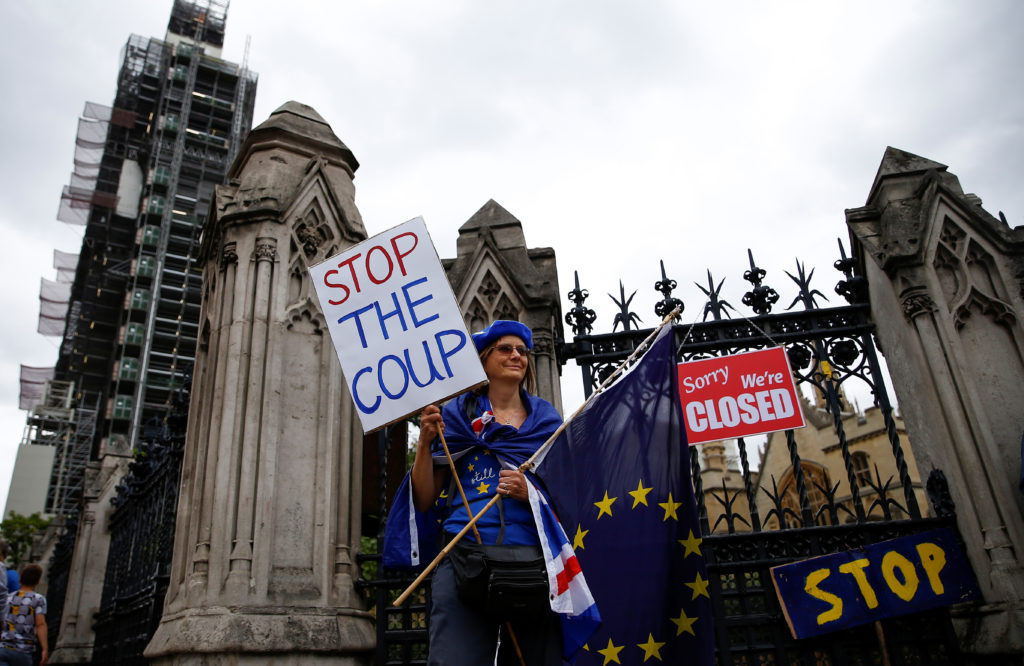 A protester holds signs during an anti-Brexit protest in Westminster in London, Britain, August 31, 2019. Photo by Henry Nicholls/ Reuters

Johnson’s supporters may well be able to delay any proposed legislation from being enacted in time. Tactics could include introducing a variety of amendments that would have to be debated, or the use of filibusters to stall the process.

The shutdown of Parliament is also being challenged in three separate court cases scheduled to be heard next week.

Former Prime Minister John Major has joined one of the lawsuits, raising the likelihood that he will argue in court that the current prime minister, a fellow member of the Conservative Party, is acting improperly by shutting Parliament.

Johnson, who helped lead the successful Brexit referendum campaign, says his government is actively pursuing a new deal with EU leaders and claims opposition to his policy will make it harder to wring concessions from Europe.