Pencils raised from Barcelona to Nantes in solidarity with Paris victims

Hundreds of thousands of people rallied across France on Saturday to decry the terror attacks that left 17 dead over three days of violence, which began with an assault on the satirical magazine Charlie Hebdo on Wednesday in Paris.

Al-Qaida’s branch in Yemen claimed responsibility for the Jan. 9 attack, saying in a statement provided to the Associated Press that the act was “revenge for the honor” of the prophet Muhammad. The journal Charlie Hebdo is known for its provocative cartoons, which are often critical of religions, including Islam.

Demonstrators held up pens, pencils and placards with the words “Je suis Charlie,” meaning “I am Charlie,” expressing solidarity with the victims. At least 120,000 people marched in Toulouse, 75,000 in Nantes and 50,000 in Marseille, Reuters reported.

The attacks on the editorial office of Charlie Hebdo also inspired rallies across the globe, as people from Hong Kong to Barcelona, Spain, expressed support for freedom of speech in the wake of the killings.

In Morocco, a group of activists and journalists stood outside the Agence France-Presse news agency offices in Rabat, the country’s capital city. 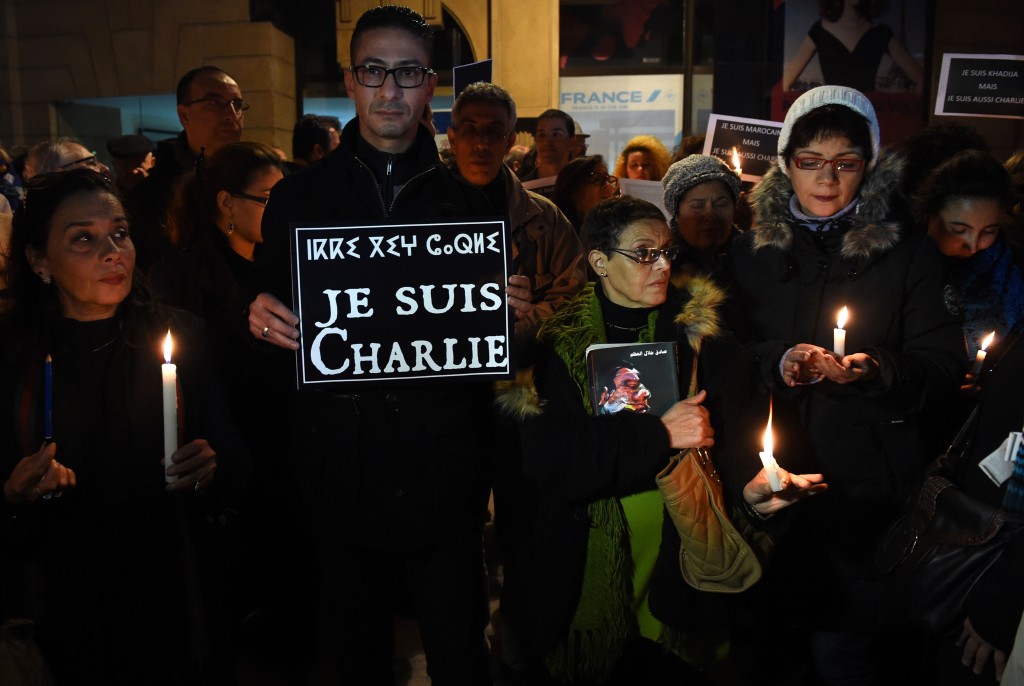 A Moroccan man holds a poster reading in French and Berber: “l am Charlie” while others hold candles during a gathering outside AFP’s office in Rabat on Jan. 9. Credit: Fadel Senna/AFP/Getty Images

In Spain, a group held pencils and placards outside the French consulate in Barcelona as tribute. 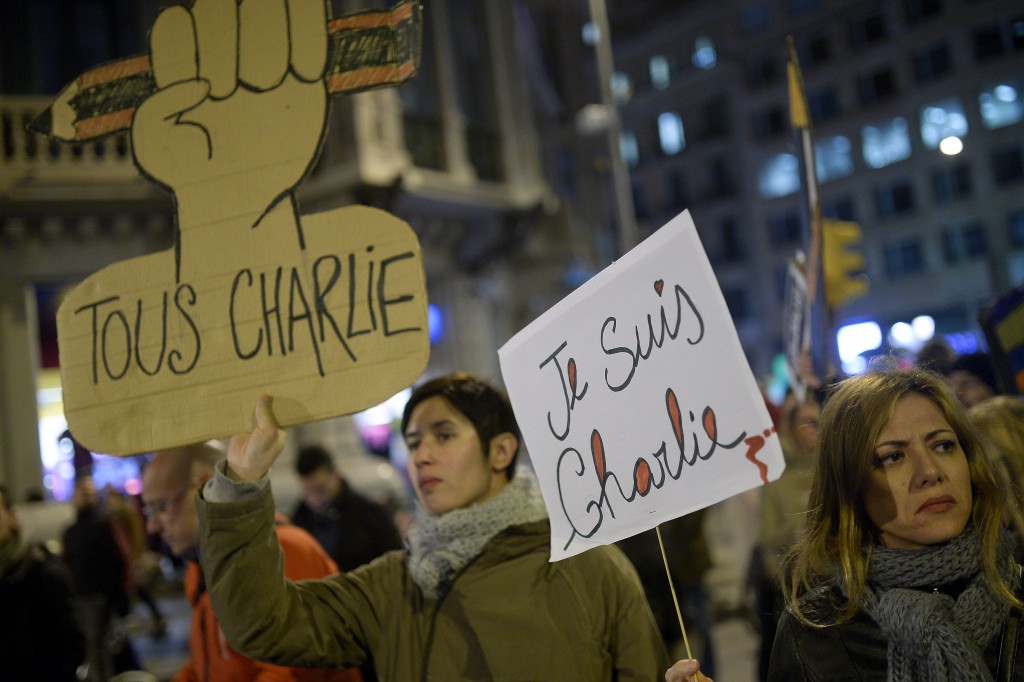 People hold pencils and placards outside the Consulate of France in Barcelona on Jan. 9 during a tribute for victims of a terror attack on French satirical weekly Charlie Hebdo in Paris that left 12 dead. Credit: Josep Lago/AFP/Getty Images

In Hong Kong, the International Federation of Journalists organized a vigil at Statue Square on Jan. 9. 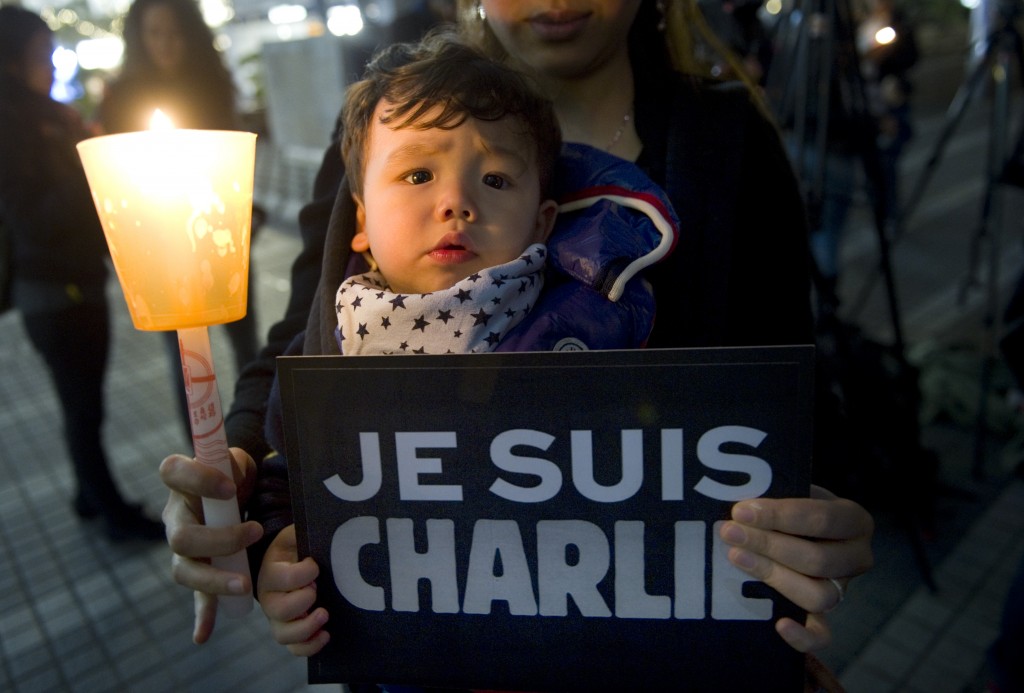 Hong Kong mother Stephanie Wang and her son Arthur hold a candle and a sign that reads ‘I am Charlie’ during a vigil organized by the International Federation of Journalists at the Statue Square on Jan. 9 in Hong Kong. Credit: Lucas Schifres/Getty Images

And on Jan. 8, renowned Indian sand artist Sudarsan Pattnaik created an 8-foot high sand sculpture to honor the victims of the Paris massacre. He used five tons of sand to create the sculpture, the Odisha Sun Times reported. 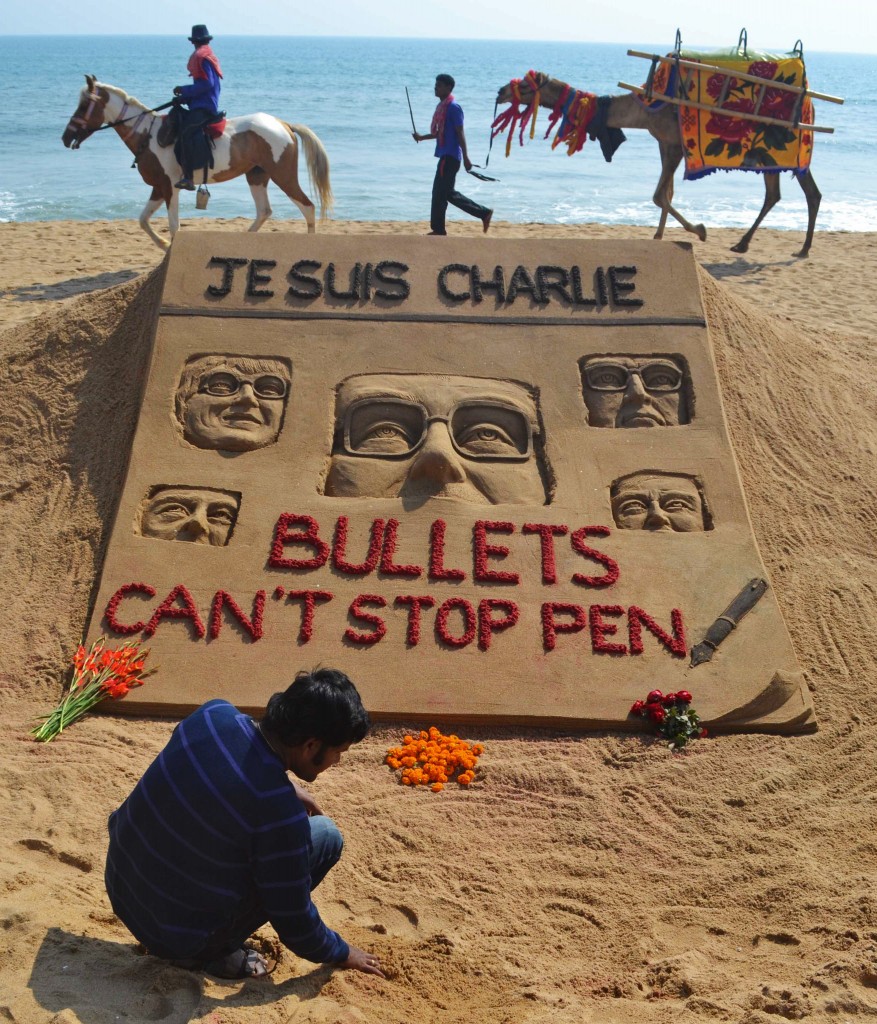 Indian artist Sudarsan Pattnaik is pictured with his sand sculpture, in tribute of those who lost their lives in the Jan. 7 attack by gunmen on French satirical weekly Charlie Hebdo. Credit: Asit Kumar/AFP/Getty Images

A unity rally planned for Sunday in Paris is expected to draw an enormous crowd. A number of world political figures have said they would attend, including British Prime Minister David Cameron and Israeli Prime Minister Benjamin Netanyahu.

French Interior Minister Bernard Cazeneuve told reporters that additional security measures would be deployed in anticipation of the march.

“French people must know all measures have been taken to ensure this demonstration can take place in harmony, respect and of course safety. For those who want to attend it, they can attend in all safety,” he said.