The queen says goodbye to Philip, continues her reign alone

WINDSOR, England — Sitting by herself at the funeral of Prince Philip on Saturday, Queen Elizabeth cut a regal, but solitary figure: still the monarch, but now alone.

The queen sat apart from family members at the simple but somber ceremony in accordance with strict social distancing rules during the coronavirus pandemic. But if the ceremony had been for anyone else, at her side would have been her husband of 73 years, who gave a lifetime of service to the crown.

Wearing a facemask, the queen was dressed all in black, except for the diamond brooch that flashed on her left shoulder — a piece she had often worn on engagements with her husband.

The monarch’s four children and eight grandchildren sat in small groups nearby, during a stripped-back service at Windsor Castle that made their loss somehow more personal for people who often live their lives in public. The pandemic has put Britain’s royal family in the same position as many others, unable to give loved ones the sendoffs they would have wanted.

Just 30 mourners were allowed to attend the service for the prince, who died April 9 at the age of 99.

“We have been inspired by his unwavering loyalty to our queen, by his service to the nation and the Commonwealth, by his courage, fortitude and faith,” the dean of Windsor, David Conner, said in his call to prayer. “Our lives have been enriched through the challenges that he has set us; the encouragement that he has given us; his kindness, humor and humanity.”

Philip’s body was carried to St. George’s Chapel at the castle on a Land Rover that the prince himself had specially designed. It was followed by members of the Royal Family, including Princes William and Harry, who made their first public appearance together since Harry and his wife, Meghan, gave a controversial interview to U.S. television host Oprah Winfrey in which they discussed the difficulties of royal life and how the two brothers had grown apart. 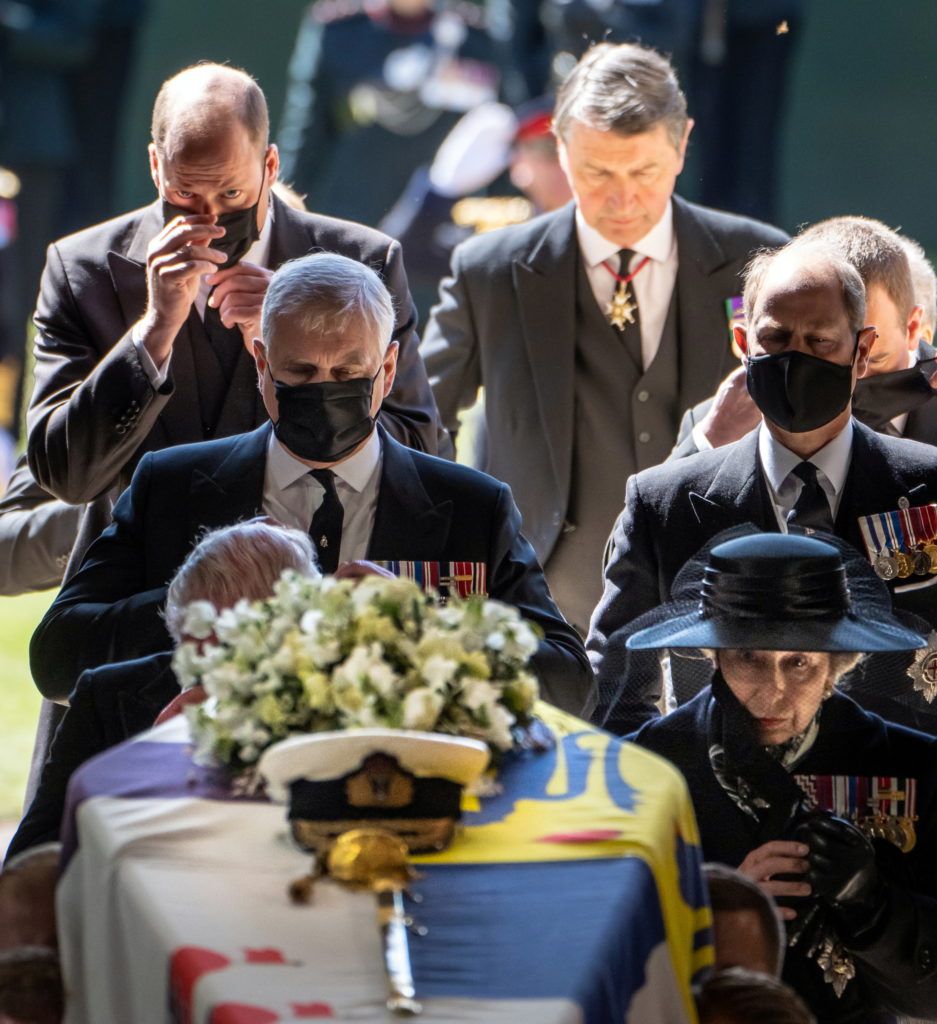 Members of the Royal Family follow the coffin of Britain’s Prince Philip, husband of Queen Elizabeth, who died at the age of 99, as they enter at Saint George’s Chapel for his funeral service, in Windsor, Britain, April 17, 2021. Photo by Danny Lawson/Reuters.

The nation honored Philip with a minute’s silence observed across the United Kingdom at 3 p.m., its beginning and end marked by a gun fired by the King’s Troop Royal Horse Artillery. The final shot signaled the start of a funeral service steeped in military and royal tradition, but infused with the duke’s personality.

Inside the medieval Gothic chapel, the setting for centuries of royal weddings and funerals, this service was quiet and without excessive pageantry. Philip was deeply involved in planning the ceremony. At his request, there was no sermon. There were also no eulogies or readings, in keeping with royal tradition.

Former Bishop of London Richard Chartres, who knew Philip well, said the 50-minute service reflected the preferences of the prince, who was a man of faith but liked things to be succinct.

“He was at home with broad church, high church and low church, but what he really liked was short church,” Chartres told the BBC.

The monarch offered her own touches to the day. Ahead of the funeral, Buckingham Palace released a photo of the queen and Philip, smiling and relaxing on blankets in the grass in the Scottish Highlands in 2003. The palace said the casual, unposed photo was a favorite of the queen.

Earlier in the day, a few local residents left flowers outside the castle, though most people heeded requests from the palace and police to stay away because of the pandemic.

The funeral procession and the service itself took place out of public view, within the grounds of the castle, a 950-year-old royal residence 20 miles (about 30 kilometers) west of London. It was broadcast live on television.

The day’s events began at 11 a.m., when Philip’s coffin was moved from the royal family’s private chapel to the Inner Hall of Windsor Castle, where it rested until the procession began. The coffin was draped with Philip’s personal standard, topped with his Admiral of the Fleet Naval Cap and sword. The sword was given to him by his father-in-law, King George VI, on the occasion of his marriage to the queen in 1947.

Composing a wreath atop the coffin were flowers chosen by the queen, including white lilies, small white roses, white freesia, white wax flower, white sweet peas and jasmine. A note from the monarch was attached, but its contents were not disclosed.

The funeral reflected Philip’s military ties, both as the ceremonial commander of many units and as a veteran of the Royal Navy who served with distinction during World War II. More than 700 military personnel took part in the commemorative events, including army bands, Royal Marine buglers and an honor guard drawn from across the armed forces. 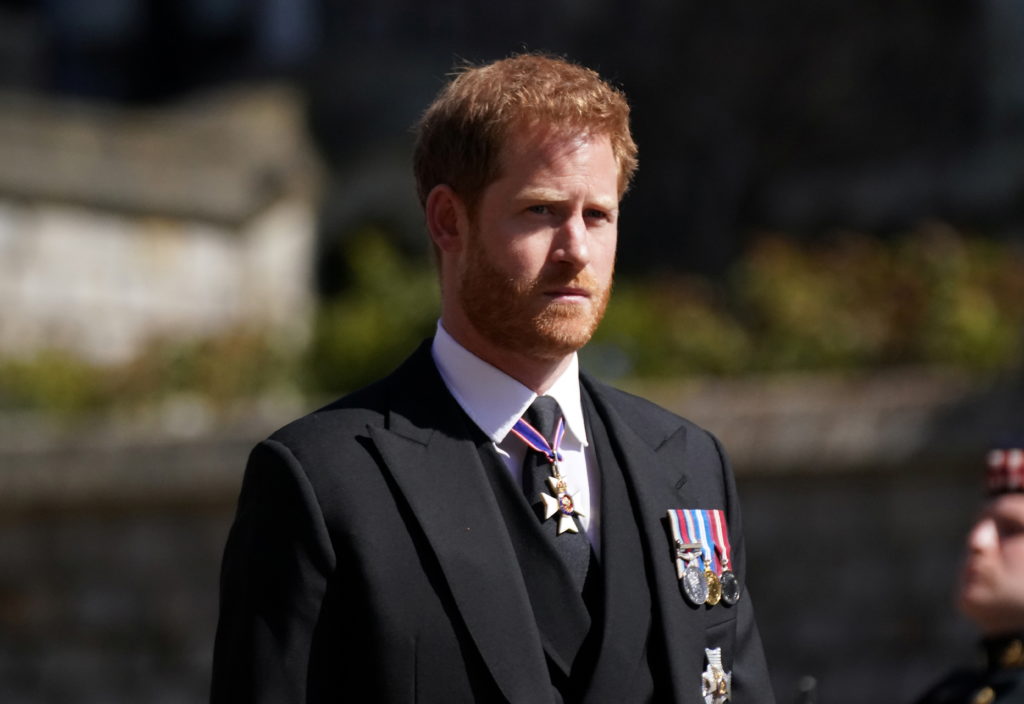 Britain’s Prince Harry walking in the procession at Windsor Castle, Berkshire, during the funeral of Britain’s Prince Philip, who died at the age of 99, Britain, April 17, 2021. Photo by Victoria Jones/Reuters.

The armed forces also sent wreaths of flowers that were laid outside St. George’s chapel, some with handwritten notes. One said the Royal Marines wanted to pay their respects to a man “who stood with us and among us for 64 years.”

Lieutenant Gen. Roland Walker, regimental lieutenant colonel of the Grenadier Guards, said his unit was honored to take part because of its close relationship with the prince. Philip served as regimental colonel of the guards, its honorary leader, for 42 years.

“This is a privilege,” he told the BBC. “Because my understanding is he planned this, so we’re here because he wanted us to be here, and that, I think, down to the junior guardsmen, is a known fact.”

Philip and the queen’s children — Prince Charles, Princess Anne, Prince Andrew and Prince Edward — walked behind the hearse along with other members of the Royal Family, all of whom wore civilian clothes at the queen’s request. The queen followed in a Bentley.

William and Harry were part of the nine-member royal contingent, although their cousin, Peter Phillips, walked between them. There was no obvious tension between the brothers, whose relationship has been strained since Harry’s decision to quit royal duties and move to California. After the service, they walked back to the castle together, seeming to chat amiably.

Their appearance at the service stirred memories of the 1997 funeral of Princess Diana, when William and Harry, then 15 and 12, walked behind their mother’s coffin accompanied by Philip.

In honor of Philip’s military service, several elements of the funeral had a maritime theme, including the hymn “Eternal Father, Strong to Save,” which is associated with seafarers and seeks protection “for those in peril on the sea.”

As Philip’s coffin was lowered into the Royal Vault, Royal Marine buglers sounded “Action Stations,” an alarm that alerts sailors to prepare for battle — included in the service at Philip’s request. He will rest there, at least until the queen’s death, alongside the remains of 24 other royals, including King George III, whose reign included the years of the American Revolution. The queen and Philip are expected to be buried together in the Royal Burial Ground on the Frogmore Estate close to Windsor Castle.

For decades, Philip was a fixture of British life, renowned for his founding of the Duke of Edinburgh’s Awards program that encouraged youths to challenge themselves and for a blunt-spoken manner that at times included downright offensive remarks. He lived in his wife’s shadow, but his death has sparked a reflection about his role, and new appreciation from many in Britain.

“To be perfectly honest I didn’t realize the extent (of) what his life had been, what he had done for us all,” said Viv Davies, who came to pay her respects in Windsor. “He was a marvelous husband, wasn’t he, to the queen and the children? Just remarkable — and I don’t think we will see the like again.”

Left: Britain's Queen Elizabeth II arrives for the funeral of Britain's Prince Philip, who died at the age of 99, at St George's Chapel, in Windsor, Britain, April 17, 2021. Victoria Jones/Reuters.