In the Philippines, Duterte’s brutal war on drugs kills thousands

In the Philippines, police and unidentified gunmen have murdered thousands of people in recent months, and President Rodrigo Duterte says these death squads have more work to do. 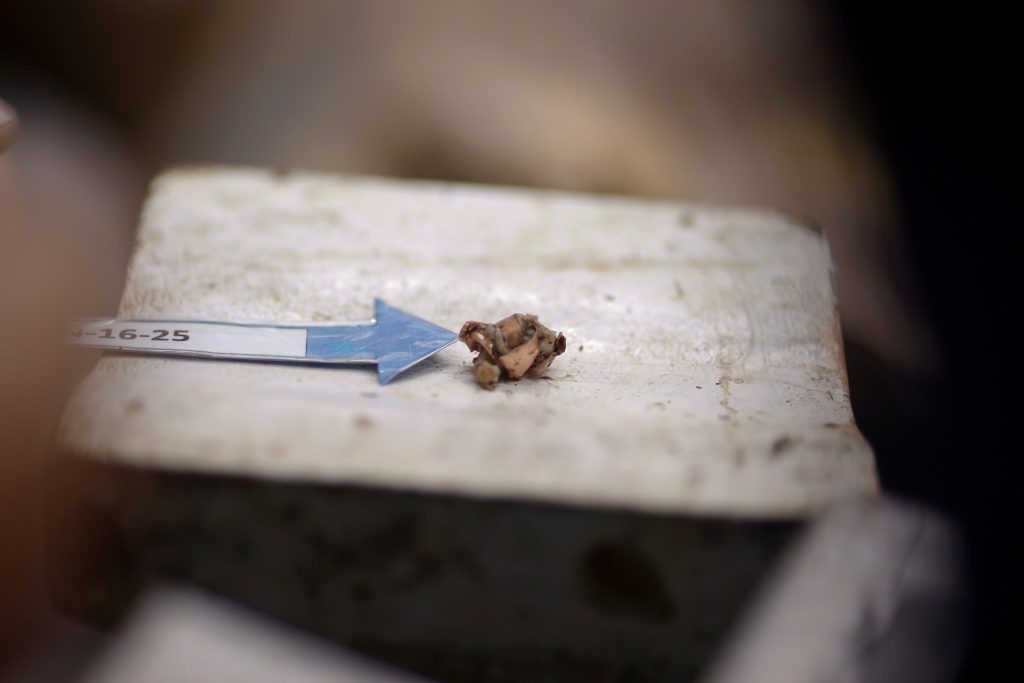 A bullet casing found inside the skull of Florjohn Cruz is pictured as evidence during an autopsy performed by the Philippines Commission on Human Rights at Eusebio Funeral Service in Manila, Philippines. Photo by REUTERS/Damir Sagolj

Since Duterte was elected in May and launched his war on drugs in July, the Philippines National Police say they have killed more than 2,000 Filipinos, said Phelim Kine, deputy director for Human Rights Watch’s Asia division, and unidentified gunmen have killed nearly 4,000 more people. These victims include Florjohn Cruz, 34, who was shot in his mother’s home in October. His family asked the Philippines Commission on Civil Rights to investigate his death, according to Reuters.

Duterte has said he will extend his campaign of extrajudicial killings another six months, Reuters reported in September. 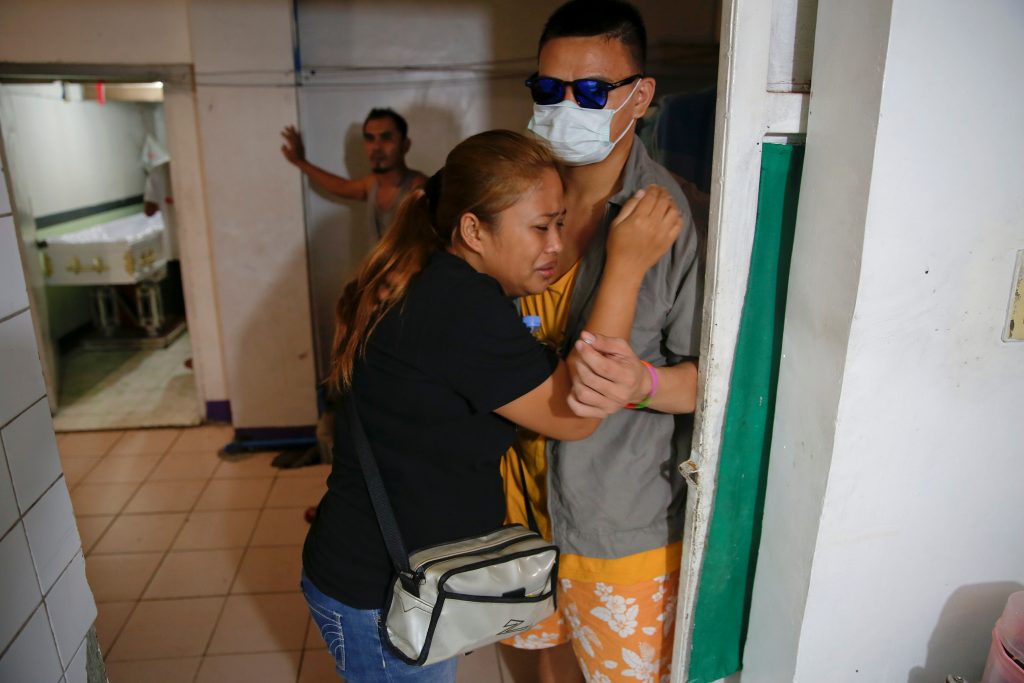 Rita, the wife of Florjohn Cruz, reacts after seeing the body of her husband before his second autopsy performed by the Philippines Commission on Human Rights at Eusebio Funeral Service in Manila, Philippines. Photo by REUTERS/Damir Sagolj

“This is nothing less than a human rights calamity,” Kine told the NewsHour during a phone interview from Taipei, Taiwan.

Before he left Manila this week, Kine said the Filipino capitol was a “vibrant, traffic-choked Asian metropolis” by day. But at night, Kine said the city’s slums transform into “very scary, very sinister places.” Often, victims are discovered on street corners at dawn, their bodies riddled with bullets or stab wounds and their heads encased in packing tape. Once the tape is peeled away, Kine said victims’ eyes are wide open and their mouths frozen as if screaming. This is happening nationwide, he said. 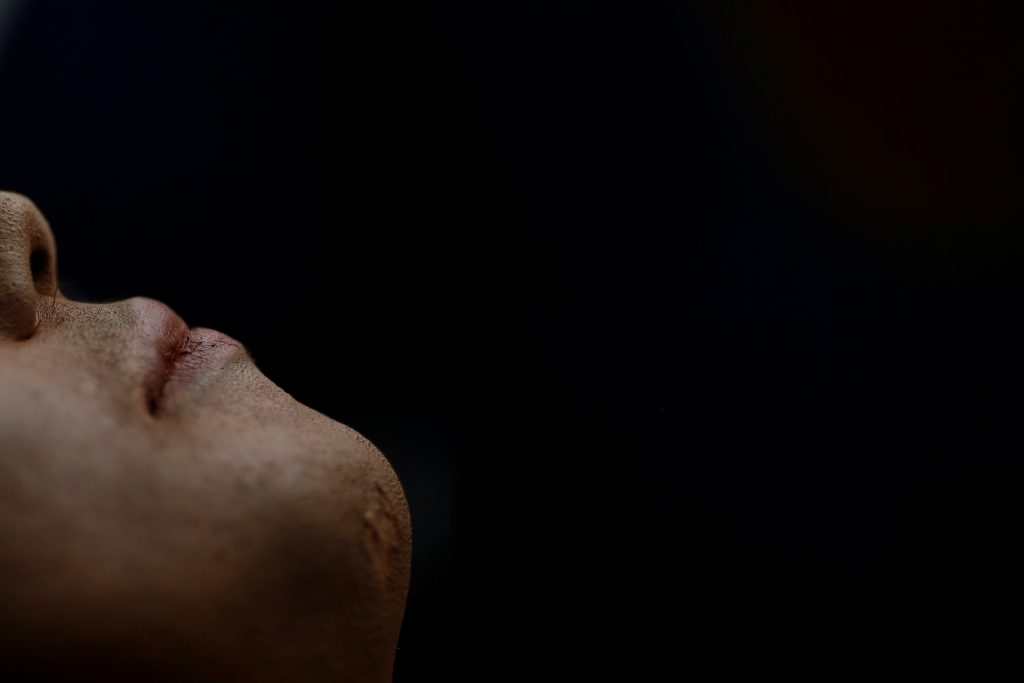 Make-up covers the entry wound on the chin of Florjohn Cruz as his body is brought to Eusebio Funeral Service for a second autopsy performed by the Philippines Commission on Human Rights in Manila, Philippines. REUTERS/Damir Sagolj

International outcry has mounted against Duterte and his campaign. In August, Agnes Callamard, the United Nations special rapporteur for summary executions, demanded the campaign’s immediate stop, saying, “Allegations of drug-trafficking offenses should be judged in a court of law, not by gunmen on the streets,” and that the Philippines is obligated “to ensure the right to life and security of every person in the country, whether suspected of criminal offenses or not.” In response, Duterte threatened to leave the United Nations. 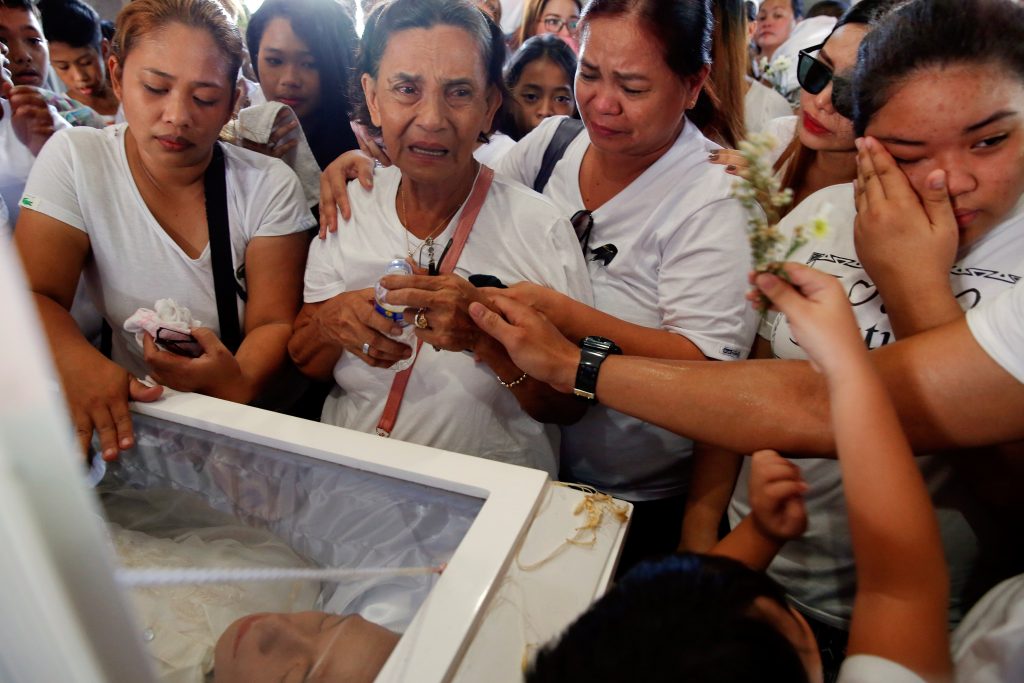 The mother, wife, and other relatives of Florjohn Cruz, who was killed in a police drugs buy-bust operation, mourn by his coffin during his funeral in Manila, Philippines. Photo by REUTERS/Damir Sagolj

President Barack Obama canceled a September meeting with Duterte after the Filipino president insulted, cursed and threatened Obama if the U.S. leader tried to talk about the mass killings in the Philippines. After President-elect Donald Trump’s win, Duterte said he and Trump developed a rapport, and Trump invited him to the White House. Trump’s transition team did not confirm the invitation. 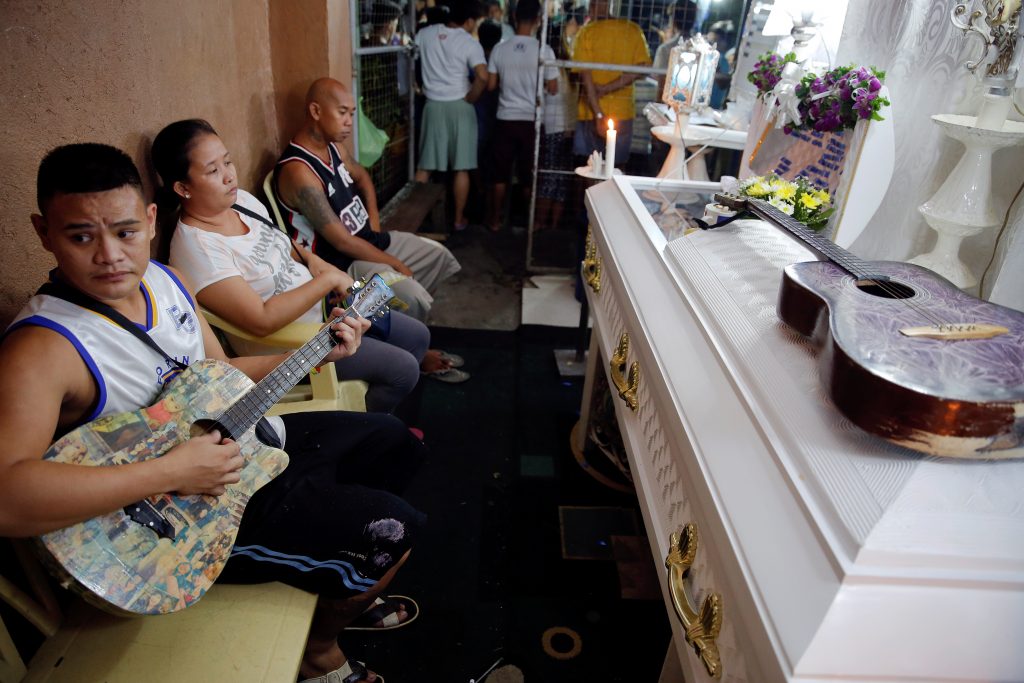 Friends and relatives of Florjohn Cruz, who was killed in a police drugs buy-bust operation, gather around his coffin during his wake in Manila, Philippines. Photo by REUTERS/Damir Sagolj

And in an October letter, International Criminal Court chief prosecutor Fatou Bensouda said she was “deeply concerned” over reports of thousands of extrajudicial killings in the Philippines, adding that “a widespread or systematic attack against a civilian population” may fall under the jurisdiction of the court, which prosecutes genocide and war crimes. She also wrote, “Let me be clear: Any person in the Philippines who incites or engages in acts of mass violence including by ordering, requesting, encouraging or contributing, in any other manner, to the commission of crimes within the jurisdiction of the ICC is potentially liable to prosecution before the Court.” 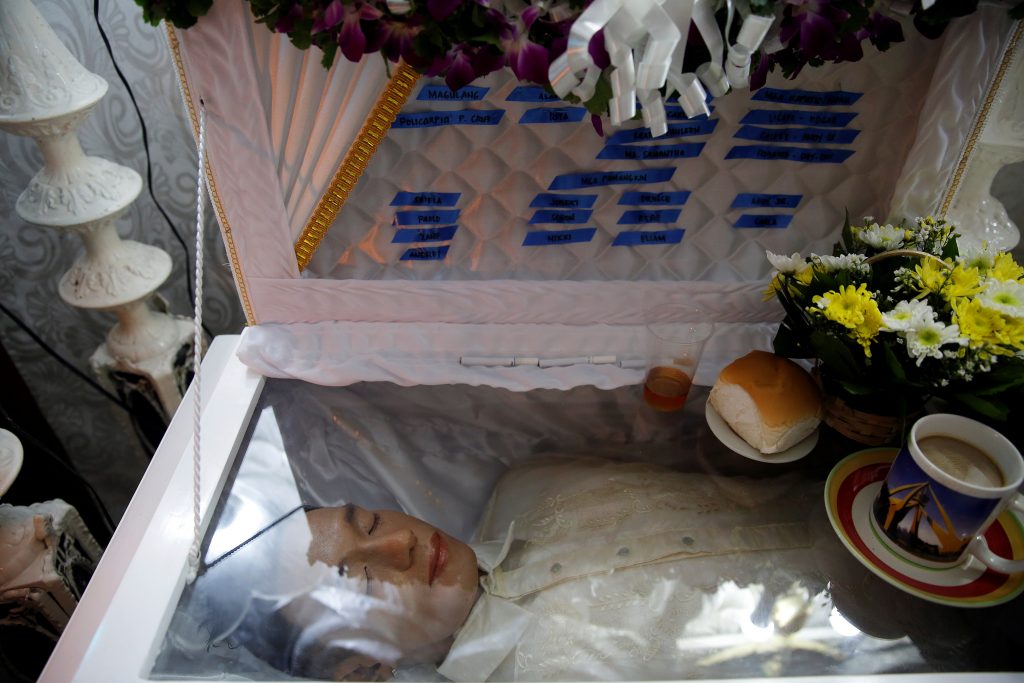 The body of Florjohn Cruz, who was killed in a police drugs buy bust operation, is placed in a coffin during the wake in his family house in Manila, Philippines. Photo by REUTERS/Damir Sagolj

Across the Philippines, the killings continue. The nation’s most vulnerable people are often the ones found shot or stabbed to death in their homes, in the street, outside schools or at their vending stalls or pedicabs. Victims sometimes possess shabu, another name for methamphetamine. Roughly 2 percent of the Filipino population use this methamphetamine, a rate comparable to methamphetamine use in the United States, Kine said. 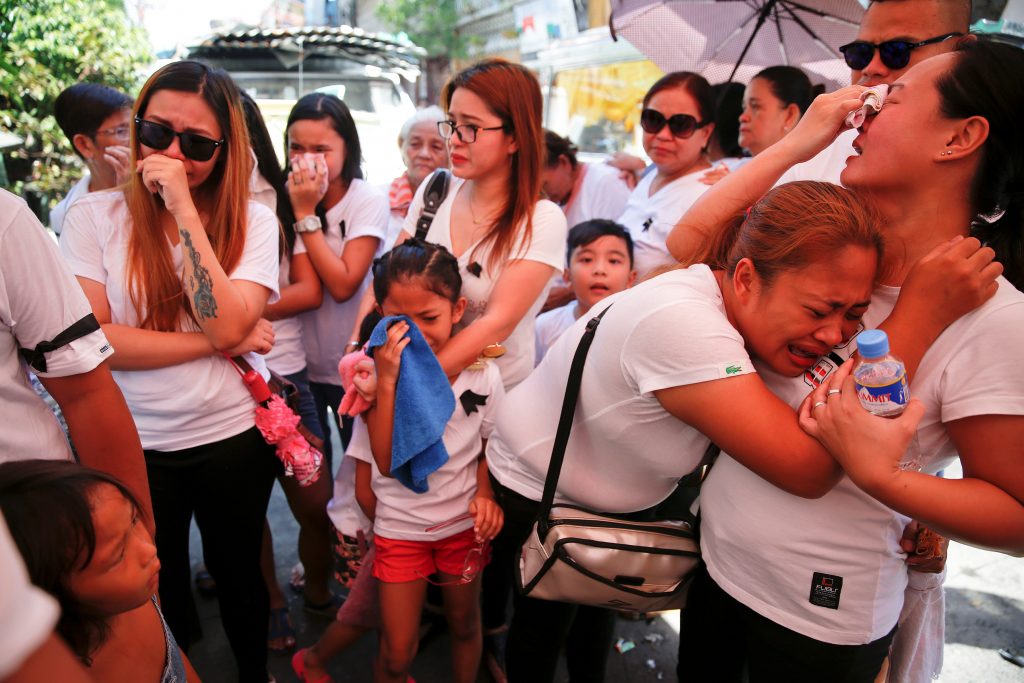 The wife and other relatives of Florjohn Cruz, who was killed in a police drugs buy-bust operation, cry as his coffin leaves their home for his funeral in Manila, Philippines. Photo by REUTERS/Damir Sagolj

Duterte said he will not prosecute police who commit these killings. But Kine said the Philippines’ continued foreign dependence holds promise. In late October, Reuters reported the State Department stopped a shipment of 26,000 assault rifles to the Philippines amid concerns police would use the weapons in extrajudicial killings. But for thousands of families mourning and burying their loved ones across the Philippines, these diplomatic gestures are too little, too late. 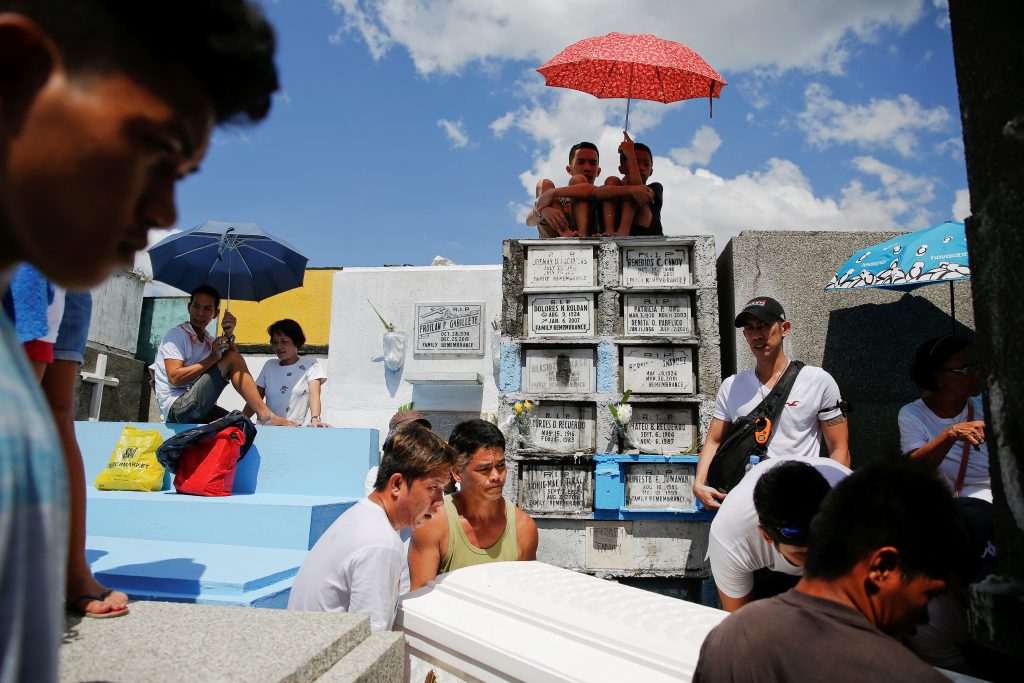 The coffin of Florjohn Cruz, who was killed in a police drugs buy bust operation, is placed in the resting place during his funeral in Manila, Philippines. Photo by REUTERS/Damir Sagolj

Editor’s note: The number of people killed by police versus unidentified gunmen has been clarified in this report.

Left: On Oct. 20, Filipino police shot and killed Florjohn Cruz, 34, at his mother's home during a drugs buy-bust operation in Manila, Philippines. His family said they later found a sign at the house, which translates as "PUSHER AND ADDICT - DONT IMITATE." These photos chronicle the autopsy and funeral of Cruz, one of thousands of Filipinos killed by police in the Philippines during President Rodrigo Duterte's months-long war on drugs. Photo by REUTERS/Damir Sagolj