MANILA, Philippines (AP) — The leading broadcast network in the Philippines went off the air under government order Tuesday, sparking shock over the loss of a major news provider during the coronavirus pandemic and accusations of targeting a presidential critic.

The National Telecommunications Commission ordered ABS-CBN Corp. to stop operating after its 25-year congressional franchise ended Monday. The network’s application for a renewal has been pending in Congress, which is controlled by President Rodrigo Duterte’s allies, but hearings have been delayed, in part by a coronavirus lockdown.

ABS-CBN, one of the country’s oldest and most influential networks, broadcast on TV and radio for most of Tuesday but later went off the air.

“Millions of Filipinos will lose their source of news and entertainment … when people need crucial and timely information as the nation deals with the COVID-19 pandemic,” the media giant said in a statement.

READ MORE: Why Trump’s embrace of Duterte is raising alarm

Company President Carlo Katigbak appealed to people to let their feelings on the closure be “felt, expressed and heard” for the benefit of the network’s more than 11,000 employees and millions of Filipinos who he said need the network’s services “specially now in the worst time of sickness and hunger.”

Media watchdogs accused Duterte and his government of muzzling independent media like ABS-CBN that have reported critically on issues including the president’s anti-drug crackdown, in which thousands of mostly poor drug suspects have been killed. Government officials denied the closure was a press freedom issue, insisting that everyone must comply with the law.

“The order to shut ABS-CBN effectively unplugs one of the Philippines most trusted, independent sources of news. It is a crushing blow to press freedom, one that was obviously ordered by President Rodrigo Duterte to silence critical reporting on his government,” said Shawn Crispin, a Bangkok-based representative for the Committee to Protect Journalists. “If he can shut down a media outfit as influential and powerful as ABS-CBN, then no independent media group is safe. The message is clear.”

Opposition Sen. Risa Hontiveros said it was alarming that ABS-CBN was ordered to stop its operations in the middle of the pandemic. “The delivery of timely and correct information is essential to our COVID-19 response. This shutdown order goes against public welfare,” Hontiveros said. 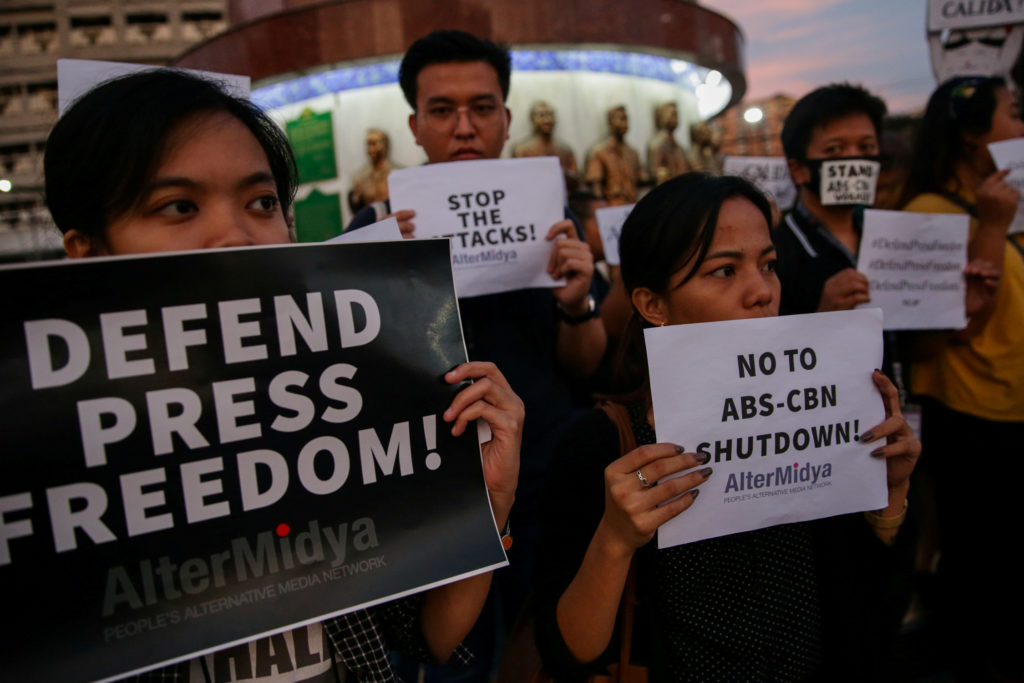 The telecommunication commission’s order caused shock and confusion among lawmakers because the agency’s top officials had agreed to grant a temporary operating license to ABS-CBN while Congress weighs its franchise renewal.

Rep. Franz Alvarez, who heads the congressional committee on legislative franchises, told ABS-CBN that he was surprised that the commission backtracked on its pledge. Many senators and Justice Secretary Menardo Guevarra have agreed that the broadcaster could operate with a temporary license pending renewal of its franchise.

Alvarez added that the company’s franchise renewal application would remain active, and the network said it will pursue efforts to reopen.

“ABS-CBN remains committed to being in the service of the Filipino and we will find ways to continue providing meaningful service to them,” the company said.

Presidential spokesman Harry Roque said ABS-CBN was free to seek legal solutions and added that Duterte has left its fate to Congress.

But ahead of the franchise expiration, Solicitor-General Jose Calida asked the Supreme Court in February to revoke the operating franchises of ABS-CBN and a subsidiary in a separate attempt to shut down the company for allegedly abusing its franchises and violating a constitutional prohibition on foreign investment in Philippine media. ABS-CBN denied the allegations.

At least two other media organizations, including a leading newspaper, the Philippine Daily Inquirer, have come under attack from Duterte for critical reporting. The government separately accused an online news organization, Rappler, of violating the ban on foreign ownership and sought its closure. Rappler denied the allegation and continues to operate.