A historic season of deadly wildfire in Australia has so far left over two dozen people confirmed dead and destroyed more than 2,000 homes.

“We lie in between two sets of out-of-control fires with the winds blowing towards us from both directions.”

The flames set off one of Australia’s largest evacuations in history, forcing thousands of people to flee some of the country’s most densely populated regions, in what many scientists have called a foreboding sign of worsening climate change.

Starting in October, the continent’s summer wildfires (or “bushfires”) have scorched a combined total of land roughly double the size of the state of Maryland. An ongoing heat wave turned lush vegetation into dangerously dry kindling, fuel for the bushfires that firefighters now struggle to control.

In Canberra, the nation’s capital, smoke drifting from nearby wildfires has made the city’s air quality among the worst in the world.

“We lie in between two sets of out-of-control fires with the winds blowing towards us from both directions,” Katerina Teaiwa, who teaches at Australian National University, told the PBS NewsHour last week. 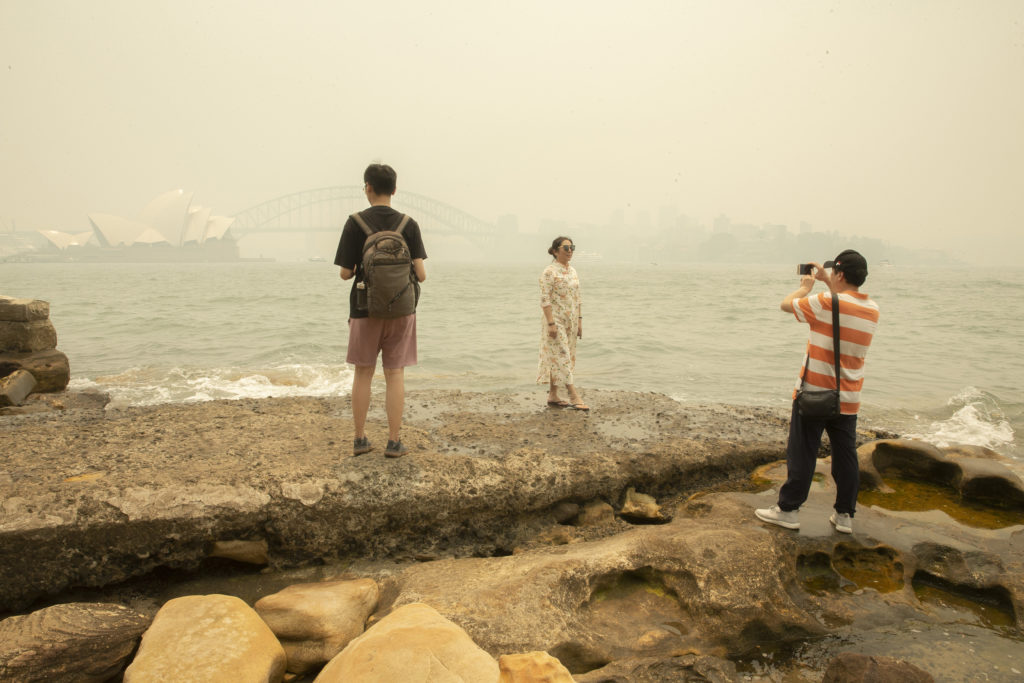 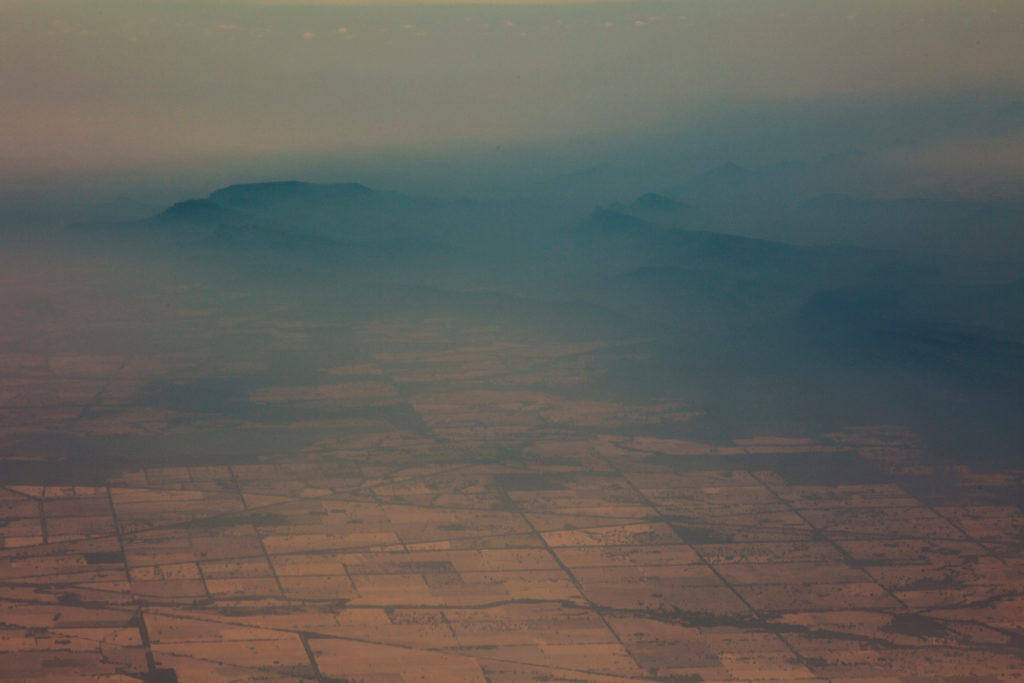 Smoke and haze over mountains in the bushfire-affected area near Cooma, New South Wales, Australia, on Jan. 7, 2020. Photo by SGT Murray Staff/Australian Department of Defence/Handout via REUTERS

Teaiwa’s two children must cover their faces when they go outside, however briefly. The city has run out of face masks and air purifiers, she said. “We’ve ordered some online, but Australia Post stopped delivering mail yesterday because of the dangerous air quality.” 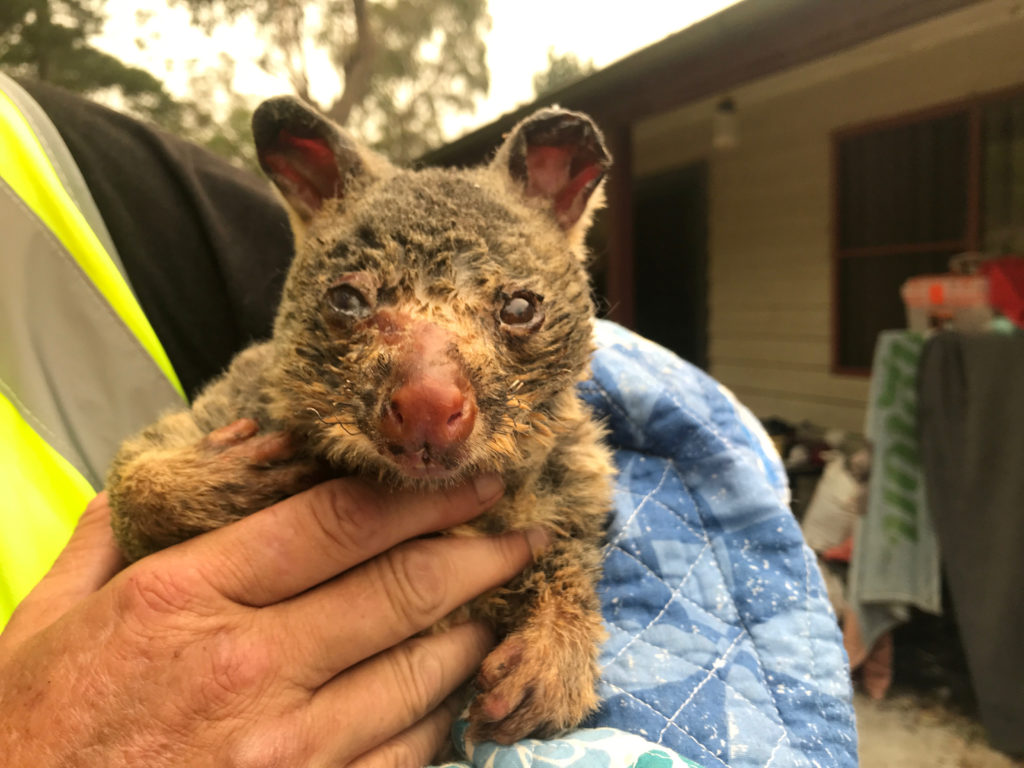 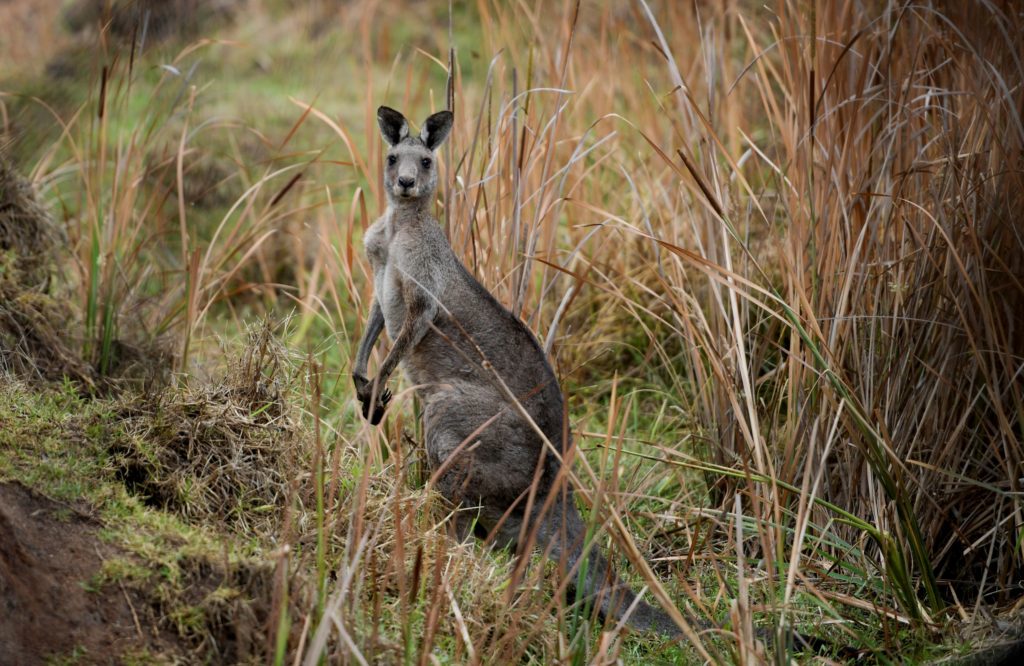 An injured kangaroo limps in a creek bed on a farm in Cobargo, Australia, Jan. 9, 2020. Photo by REUTERS/Tracey Nearmy

In addition to the human toll, more than 480 million animals have died, according to one University of Sydney estimate. Wildlife in New South Wales are dying from direct contact with the fires, or after losing their habitat and food, according to professor Chris Dickson. In what he called “highly conservative estimates,” he included most mammals, birds and reptiles, but excluded insects, bats and frogs. “The true mortality is likely to be substantially higher than those estimated,” a university statement said. 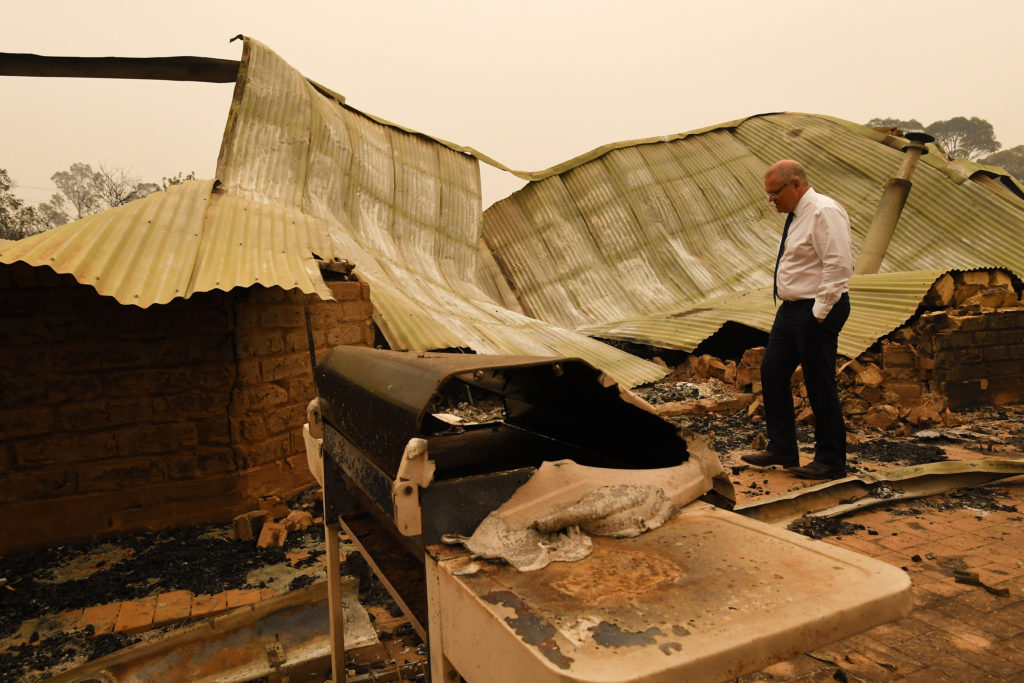 Australian Prime Minister Scott Morrison on Jan. 2 toured the fire-seared artist community of Cobargo, where residents angrily confronted him over inadequate fire-protection measures and resources. Morrison has been more widely criticized for his administration’s response to what has been called the worst disaster in the nation’s history. Critics say Morrison and his government ignored warnings from fire and emergency experts and have not done enough to combat climate change. He has apologized for vacationing in Hawaii as fires swept through the country. 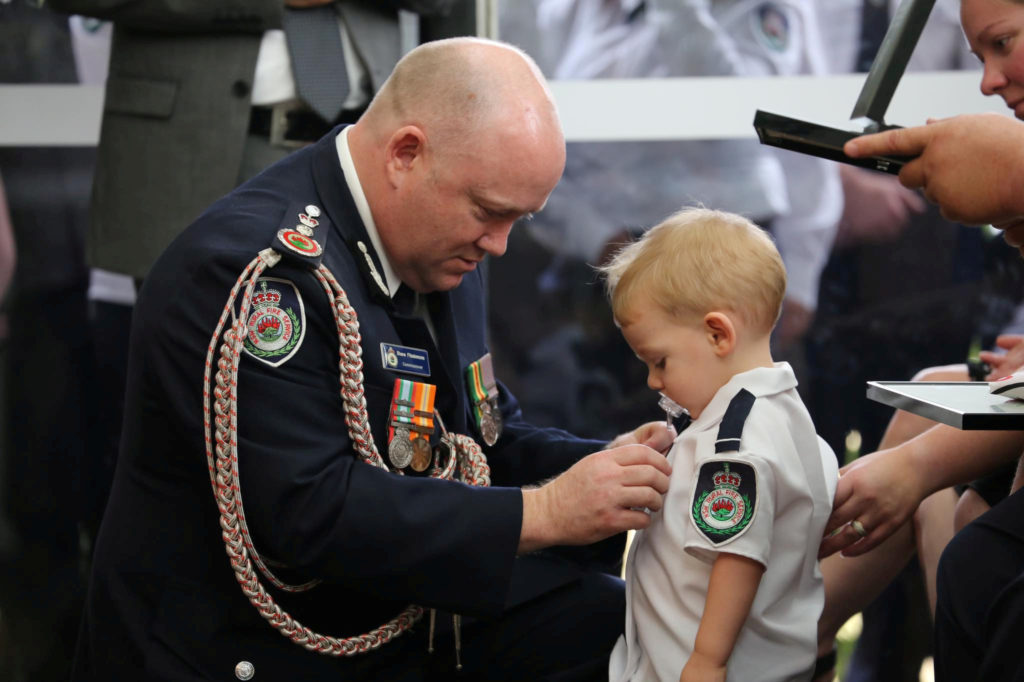 Last week, Australia’s most populous state of New South Wales declared a seven-day state of emergency for the third time this season. The Guardian reported that before the latest cycle of bushfires began, only four states of emergency had been called since 2006. A total ban on open fires has also been issued statewide. 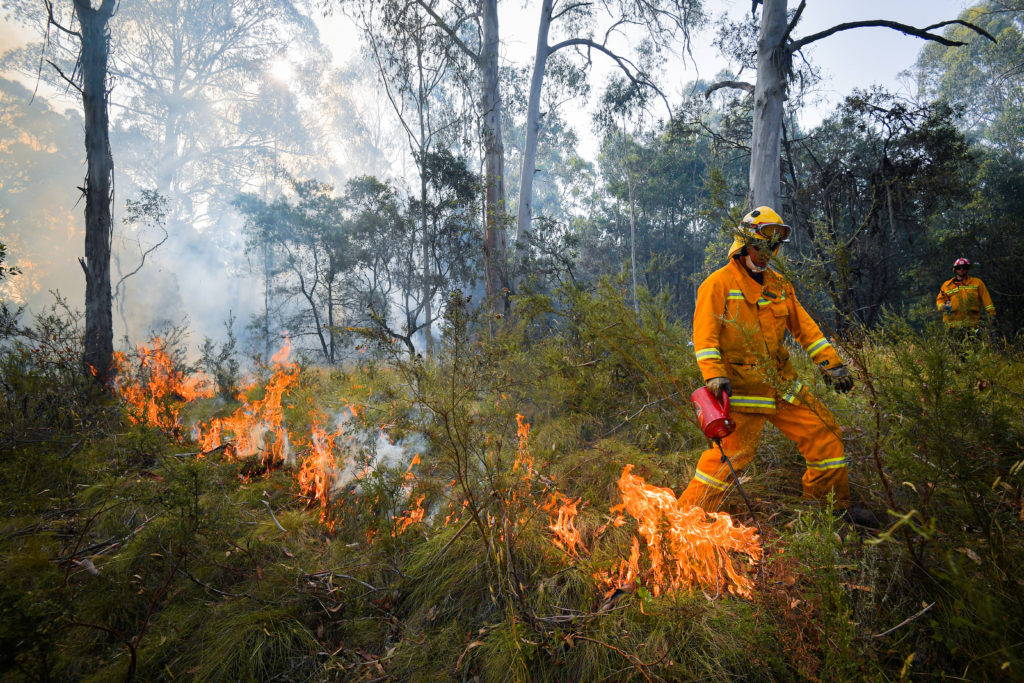 Two firefighters for a regional Rural Fire Service died Dec. 19 while battling the blaze in New South Wales. One more firefighter has been reported dead after volunteering to fight the blaze. 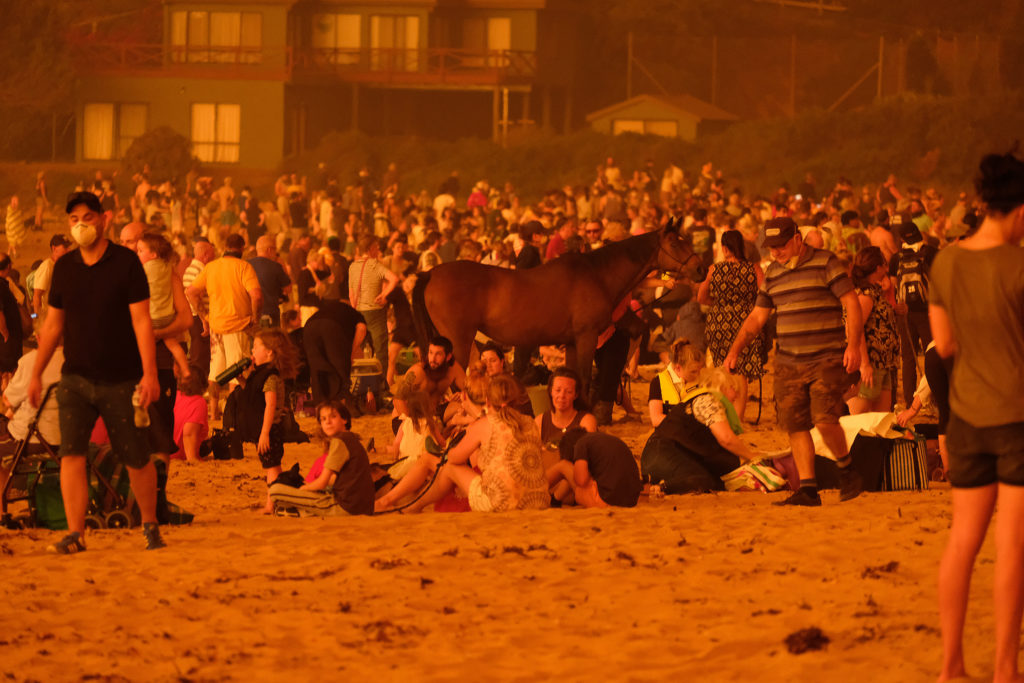 Locals seek refuge on the beach as the fire approaches into the township of Malua Bay NSW, just south of Batemans Bayon on Dec. 31, 2019. Photo by Alex Coppel/Newspix/Getty Images 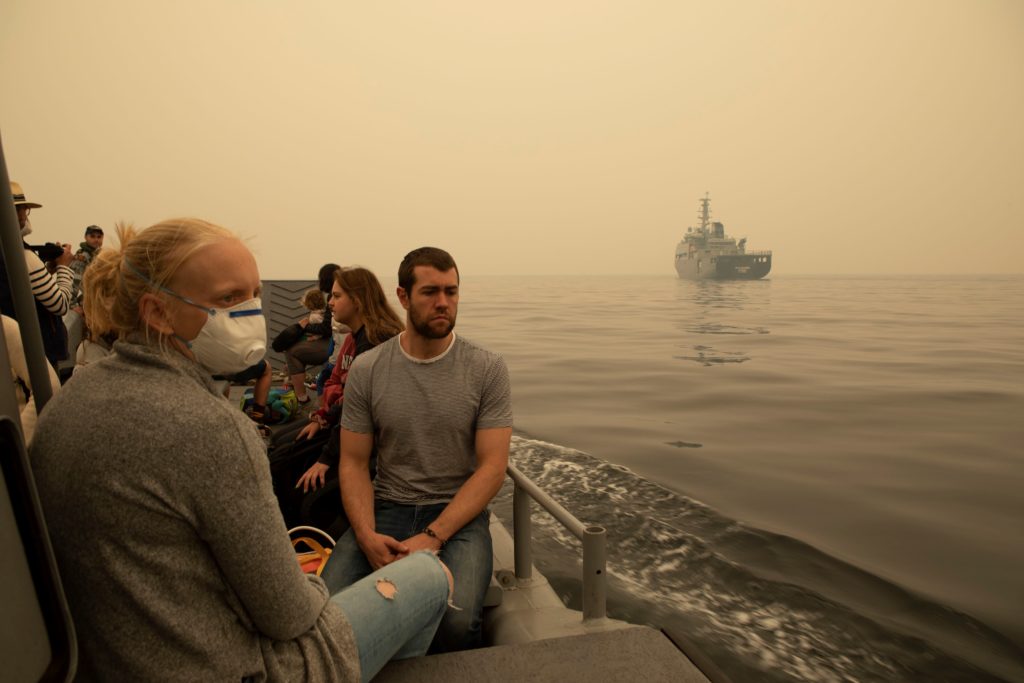 Evacuees from Mallacoota are transported by landing craft to MV Sycamore in Victoria, Australia on Jan. 3. Photo by Australian Department of Defence / Helen Frank / Handout/Anadolu Agency via Getty Images

In the nearby state of Victoria, Premier Daniel Andrews last Thursday declared a state of disaster, enabling authorities to order mass evacuations, ahead of projections that the fire conditions will deteriorate dramatically this weekend. The next day, the Australian Navy used ships to evacuate hundreds of people from Mallacoota, a seaside town popular among vacationers. 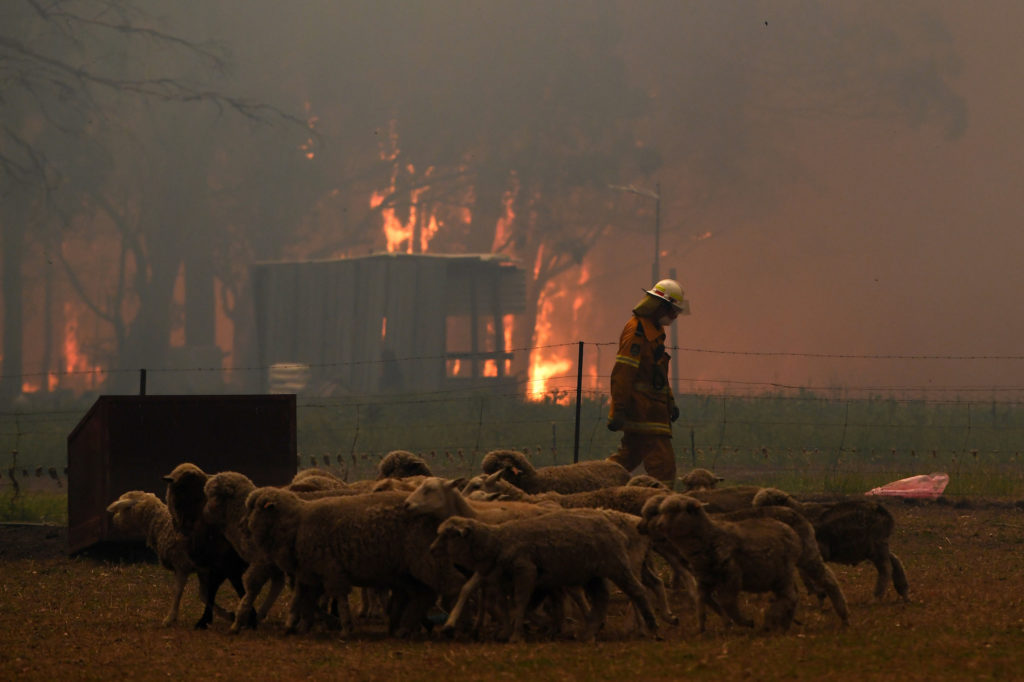 Rural Fire Service (RFS) crews engage in property protection of a number of homes along the Old Hume Highway near the town of Tahmoor on Dec. 19, 2019. Photo by AAP Image/Dean Lewins/via REUTERS 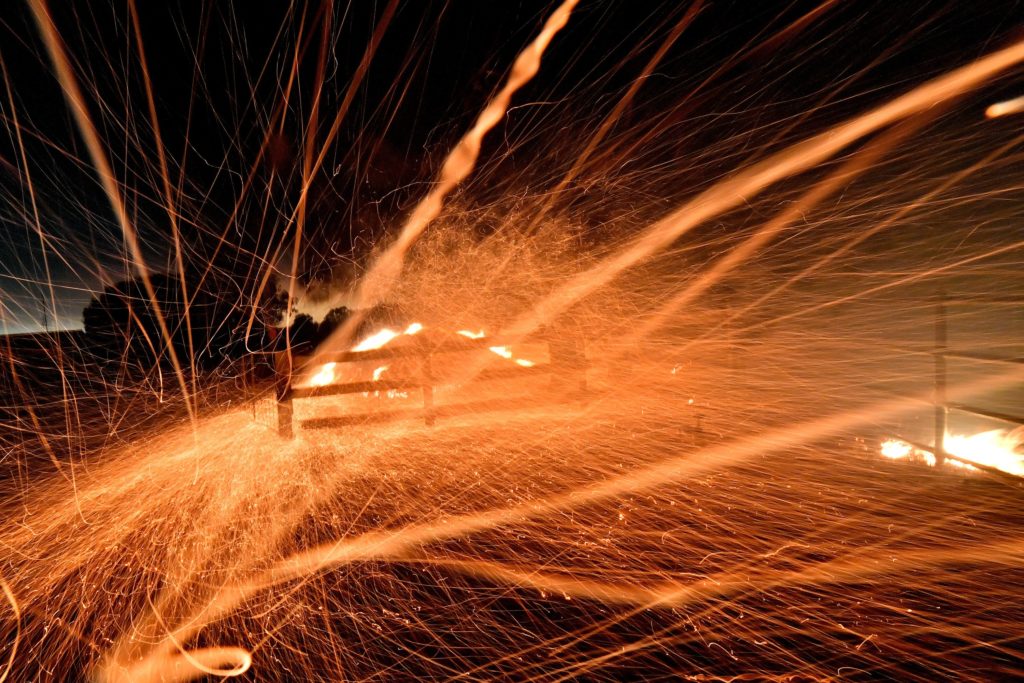 Embers from bushfires are fanned by strong winds in the area around the town of Nowra in the Australian state of New South Wales on Dec. 31, 2019. Photo by SAEED KHAN / AFP

High winds and hot temperatures mean the fire can shift quickly. Jacob Wray, a 26-year-old doctoral student, told the NewsHour that his father spent three days “ripping out our garden,” digging up grass on their property in Moruya, New South Wales, to prevent fires from taking hold around their home. He also had prepared buckets of water “if it comes to that.”

“The thought that my family home would be under attack is unimaginable,” he said. 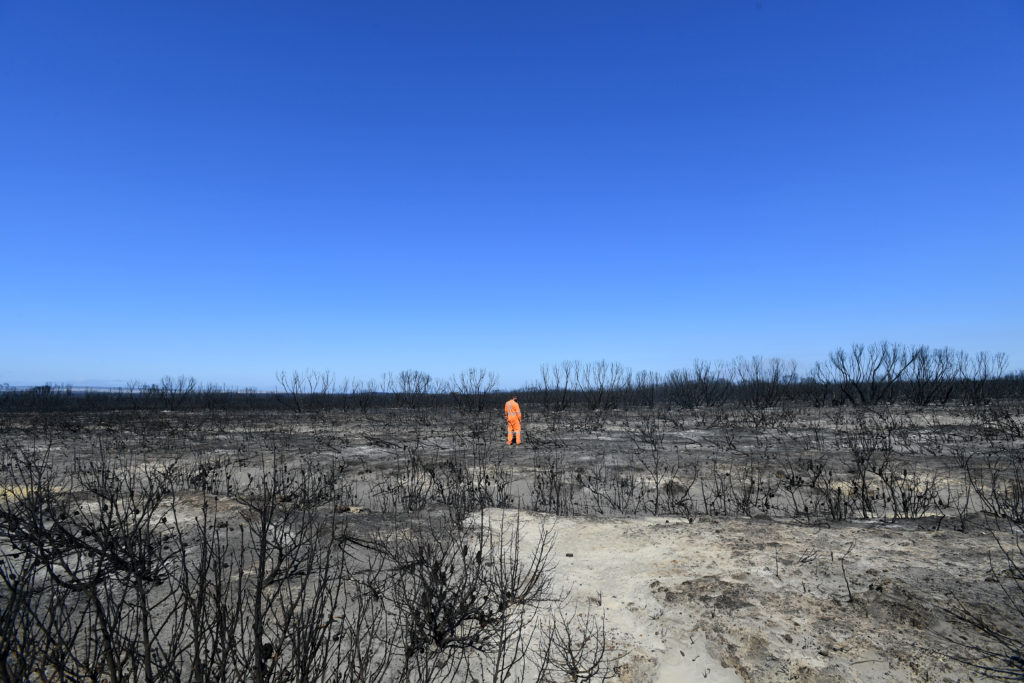 A general view of the damage done to the Flinders Chase National Park after bushfires swept through on Kangaroo Island, southwest of Adelaide, Australia, Jan. 7, 2020. Photo by AAP Image/David Mariuz/via REUTERS

Australian authorities have encouraged people to develop a bushfire plan.

“Making a choice when a bushfire threatens is too late,” the government website said. “The majority of people in bushfires die fleeing their homes at the last moment.” 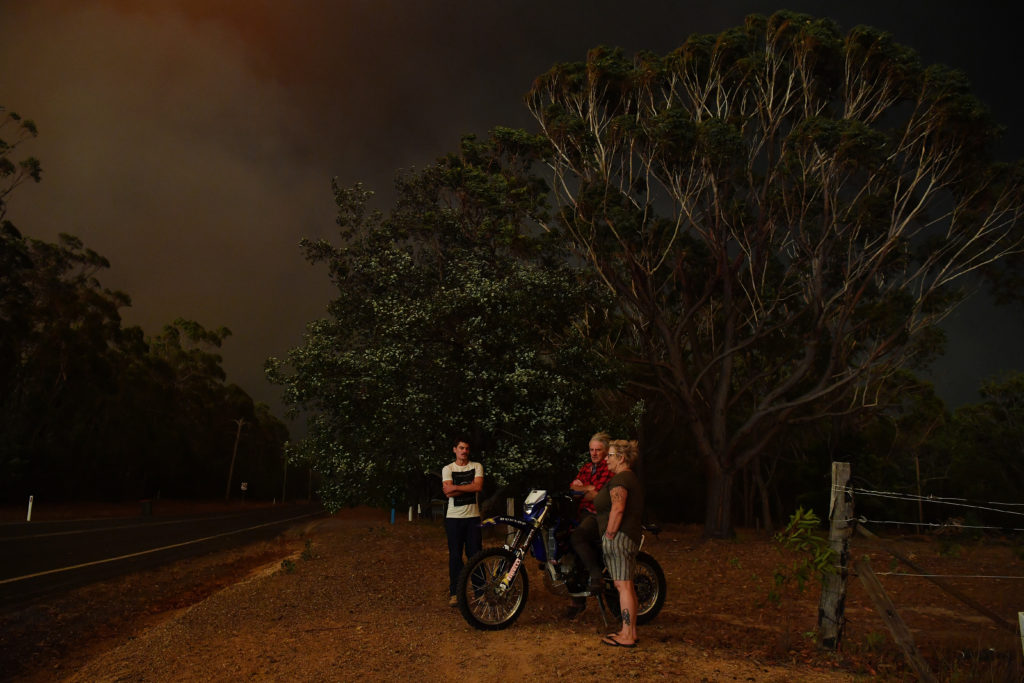 Resident Peter Nicol in the town of Sussex Inlet on Dec. 31, 2019, in Sydney, Australia. Photo by Sam Mooy/Getty Images

Maea Lenei Buhre is an associate producer for the PBS NewsHour.