OSWIECIM, Poland (AP) — German Chancellor Angela Merkel voiced a feeling of “deep shame” during her first-ever visit on Friday to the hallowed grounds of the former Nazi German death camp of Auschwitz-Birkenau, where Adolf Hitler’s regime murdered more than a million people.

Merkel noted that her visit comes amid rising anti-Semitism and historical revisionism and vowed that Germany would not tolerate anti-Semitism. She said Germany remains committed to remembering the crimes that it committed against Jews, Poles, Roma and Sinti, homosexuals and others. 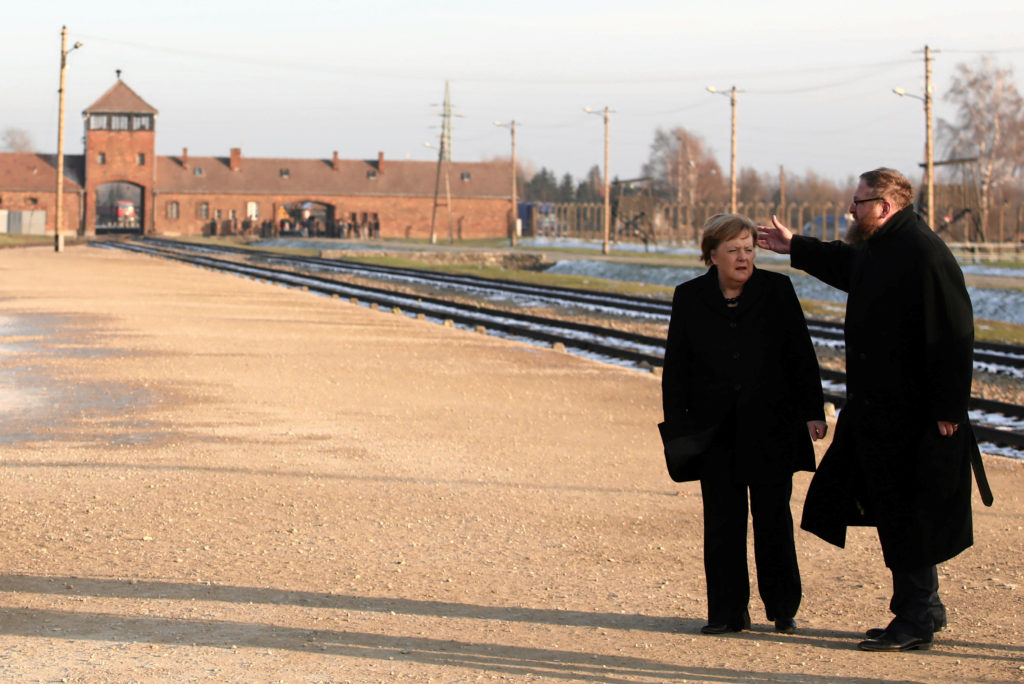 Speaking to a gathering that included former Auschwitz inmates, she said she felt “deep shame in the face of the barbaric crimes committed by Germans here.”

“Nothing can bring back the people who were murdered here. Nothing can reverse the unprecedented crimes committed here. These crimes are and will remain part of German history and this history must be told over and over again,” she said.

“These crimes are and will remain part of German history, and this history must be told over and over again.”

She called such responsibility a key element in German national identity today.

Merkel also brought a donation of 60 million euros ($66.6 million). The money will go to a fund to conserve the physical remnants of the site — the barracks, watchtowers and personal items like shoes and suitcases of those killed.

Together, those objects endure as evidence of German atrocities and as one of the world’s most recognizable symbols of humanity’s capacity for evil. But they also are deteriorating under the strain of time and mass tourism, prompting a long-term conservation effort. 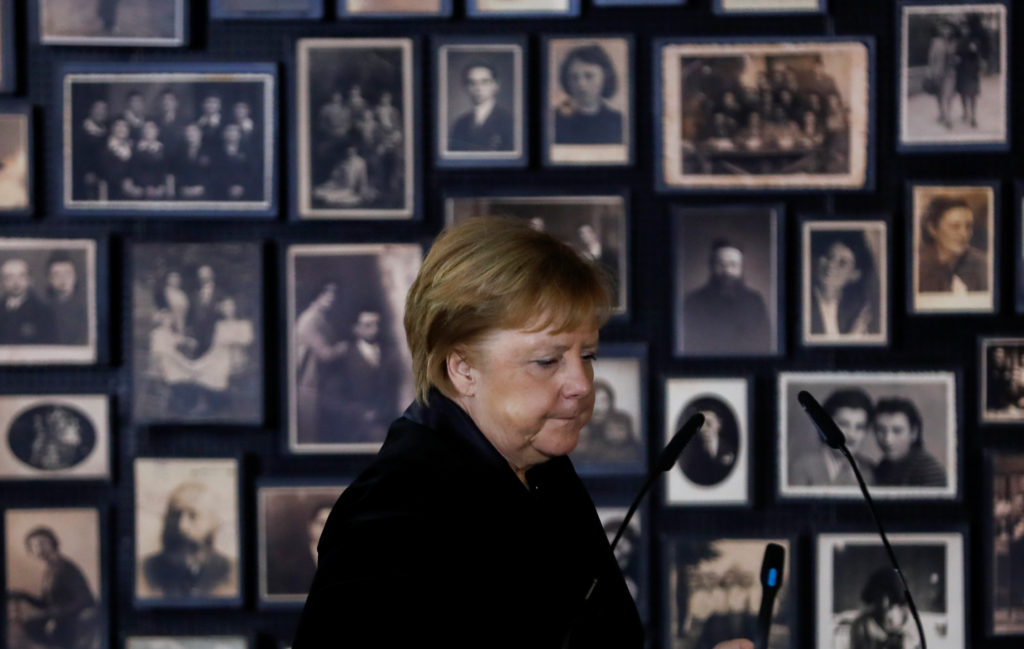 German Chancellor Angela Merkel prepares to speak in the building of the so-called “Sauna” during her visit visit at the former Nazi German concentration and extermination camp Auschwitz-Birkenau near Oswiecim, Poland, December 6, 2019. Photo by Kacper Pempel/Reuters

Accompanied by Polish Prime Minister Mateusz Morawiecki, Merkel began by seeing a crematorium and walking under the gate with the notorious words “Arbeit Macht Frei.” That was a cynical phrase that meant “work will set you free,” when the truth was that inmates were subjected to either immediate execution, painful scientific experiments or forced labor.

Merkel and Morawiecki went next to the site of executions, where they bowed their heads before two wreaths bearing their nations’ colors. The stay lasting several hours also included a visit to the conservation laboratory, where old leather shoes were laid out on a table, a nd a laying of candles at Birkenau, the part of the vast complex where Jews were subjected to mass murder in gas chambers. 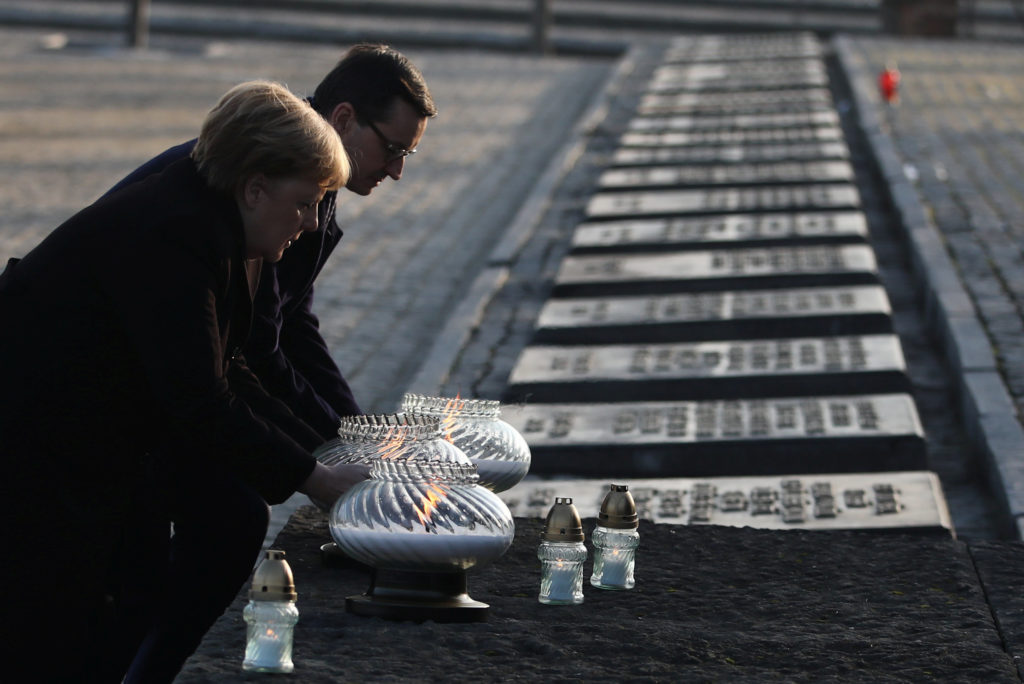 The donation to the Auschwitz Foundation comes in addition to 60 million euros that Germany donated when the fund was launched a decade ago, according to the Auschwitz-Birkenau state museum.

That brings the total German donation to 120 million euros and makes Germany by far the most generous of 38 countries that have contributed. As with the earlier donation, half comes from the federal government and half from the German states, an acknowledgement of the German nation’s responsibility.

Since becoming chancellor in 2005, Merkel has paid her respects at other Nazi concentration camps, and she has been five times to Yad Vashem, Israel’s Holocaust museum and memorial. 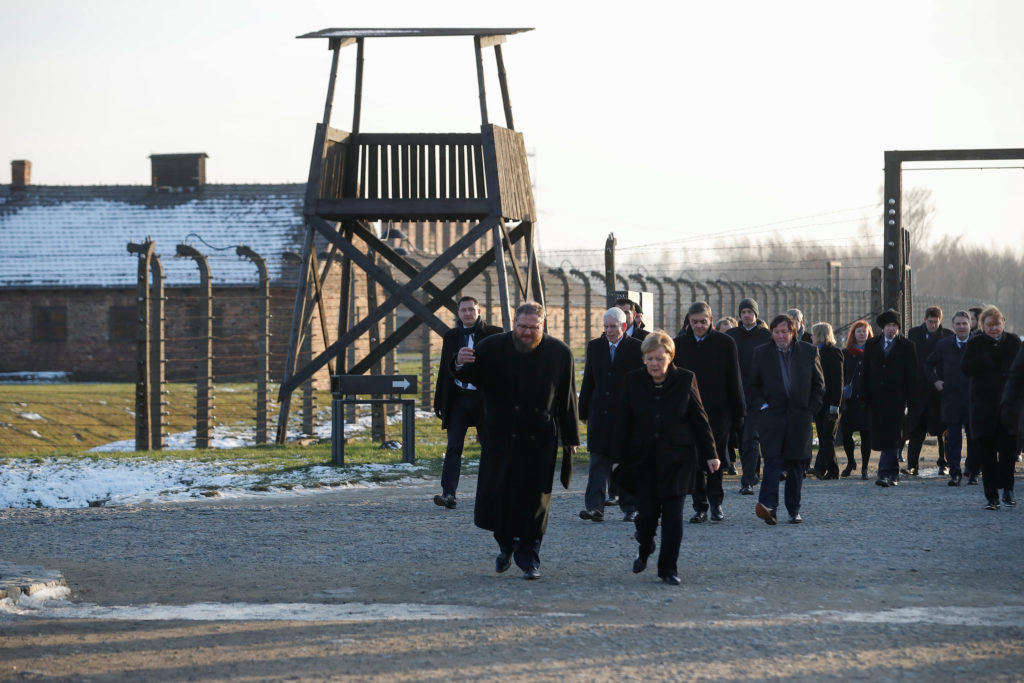 Still, Poland’s Foreign Ministry called her visit “historic,” in an obvious acknowledgement of the unique status Auschwitz has in the world’s collective memory. The ministry also noted that it was just the third visit of an incumbent head of a German government.

Nazi German forces killed an estimated 1.1 million people at the Auschwitz-Birkenau complex during their occupation of Poland during World War II. Most of the victims were Jews transported from across Europe to be killed in gas chambers. But tens of thousands of others were killed there too, including Poles, Soviet prisoners of war and Roma, or Gypsies. The camp was liberated by the Soviet army on Jan. 27, 1945.