HONG KONG (AP) — Pro-democracy activists in Hong Kong gathered Tuesday night to mark 30 years since China’s bloody crackdown on pro-democracy protesters in Beijing’s Tiananmen Square, underscoring continuing concern for Chinese human rights in the semi-autonomous territory, even as its own civil liberties are under threat.

Hong Kong is the only region under Beijing’s jurisdiction that holds significant public commemorations of the 1989 crackdown and memorials for its victims. Hong Kong has a degree of freedom not seen on the mainland as a legacy of British rule that ended in 1997.

The annual vigil at Hong Kong’s Victoria Park near the bustling Causeway Bay shopping district appeared to draw tens of thousands of participants who filled several football fields and held candles in the sultry night air. Following an introduction of songs in the city’s Cantonese dialect and traditional string music, a minute of silence was held for the Tiananmen crackdown victims.

“By being here, I’m standing for truth and justice, even though I’ve no hope the Chinese central government will ever do justice to the protesters,” said participant Stanley Lui, 42. 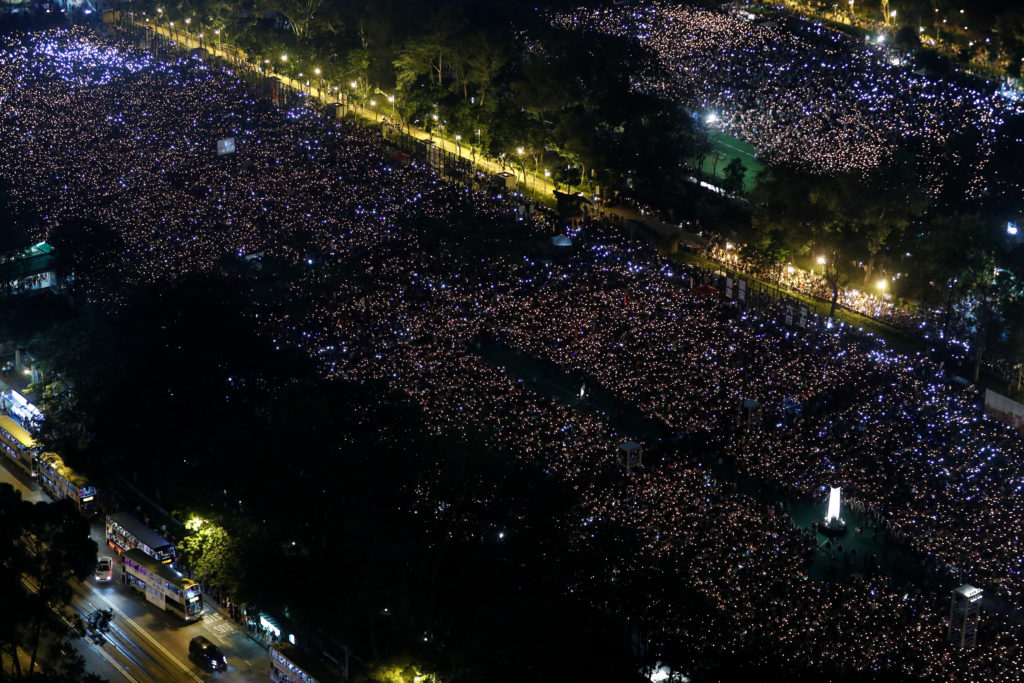 Thousands of people take part in a candlelight vigil to mark the 30th anniversary of the crackdown of pro-democracy movement at Beijing’s Tiananmen Square in 1989, at Victoria Park in Hong Kong, China June 4, 2019. Photo by Tyrone Siu/Reuters

Beijing transplant Jay Jiang, 16, said unlike many on the mainland, she knew about the crackdown even as a young child. The 10th grader was taking part in the Hong Kong vigil for the first time.

“The bottom line is the government should not deceive the people about what happened,” said Jiang, beads of sweat dotting her cheeks.

Estimates of the number of vigil participants varied widely, with police putting the figure at 37,000 and organizers at 180,000.

This year’s vigil featured a replica of the “Goddess of Democracy,” a plaster sculpture of a female figure holding a torch that was displayed in Tiananmen Square in the days leading up to the crackdown, which took place on the night of June 3-4, 1989, and is believed to have killed hundreds and possibly thousands of people. 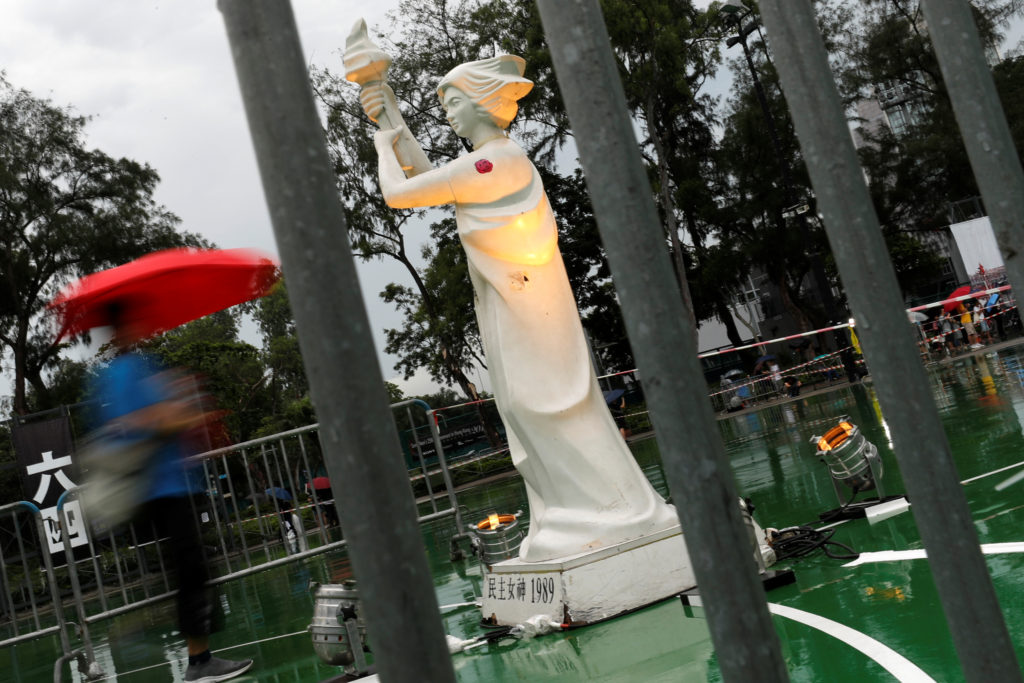 A statue of the Goddess of Democracy is seen before the start of candlelight vigil to mark the 30th anniversary of the crackdown of pro-democracy movement, at Victoria Park in Hong Kong, China June 4, 2019. Photo by Tyrone Siu/Reuters

“That statue was crushed by tanks at the June 4 crackdown, the June 4 massacre. So we are rebuilding this here … to symbolize that we are still continuing to fight for democracy, and continue on the spirit of the ’89 democratic protests,” said Chow Hang Tung, vice chair of the Hong Kong Alliance in Support of Patriotic Democratic Movements in China, which organizes the annual event.

Alliance chairman Albert Ho said many participants were seeking to “demonstrate their commitment to the cause of democracy” on the 30th anniversary and “speaking truth to power, especially for those who are silent in the mainland.”

Visitor Winnie Ma, a 55-year-old church worker, said she brought her 80-year-old mother to the park especially to view the statue on the 30th anniversary.

“I don’t know if she will see it vindicated, but I hope that I will be able to,” Ma said. 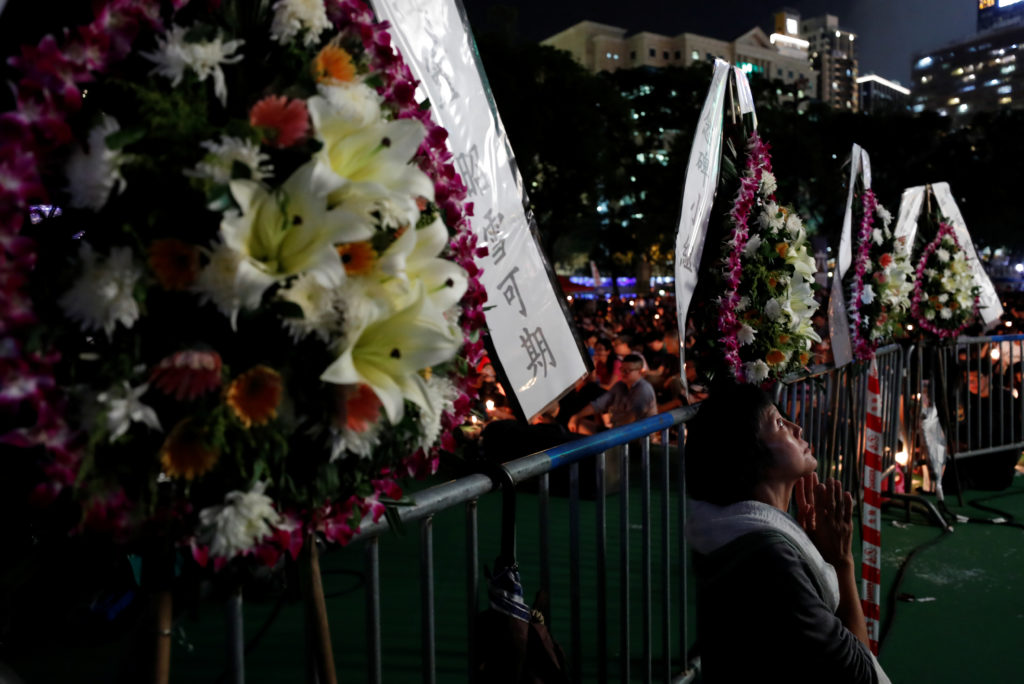 A woman takes part in a candlelight vigil to mark the 30th anniversary of the crackdown of pro-democracy movement at Beijing’s Tiananmen Square in 1989, at Victoria Park in Hong Kong, China June 4, 2019. Photo by Tyrone Siu/Reuters

Meanwhile, at the University of Hong Kong, a dozen students laid flower bouquets at the “Pillar of Shame,” a sculpture by Danish artist Jens Galschiot commemorating the crackdown’s victims.

“Just because I wasn’t born then and never experienced the event, there’s no stopping me from reminding others like me of this and carrying on the collective memory,” said 18-year-old student Donald Chung.

Students later observed a minute of silence in remembrance of the crackdown’s victims before scrubbing the pillar clean in an annual ritual.

Recent years have witnessed a generational divide about how best to memorialize the crackdown, and since 2015, Hong Kong university students have arranged their own commemorations separate from the main candlelight vigil.

“I think the young generation and most students consider themselves Hong Kongers. If we need to commemorate, we do not want to use (the vigil) to commemorate,” Pang said. 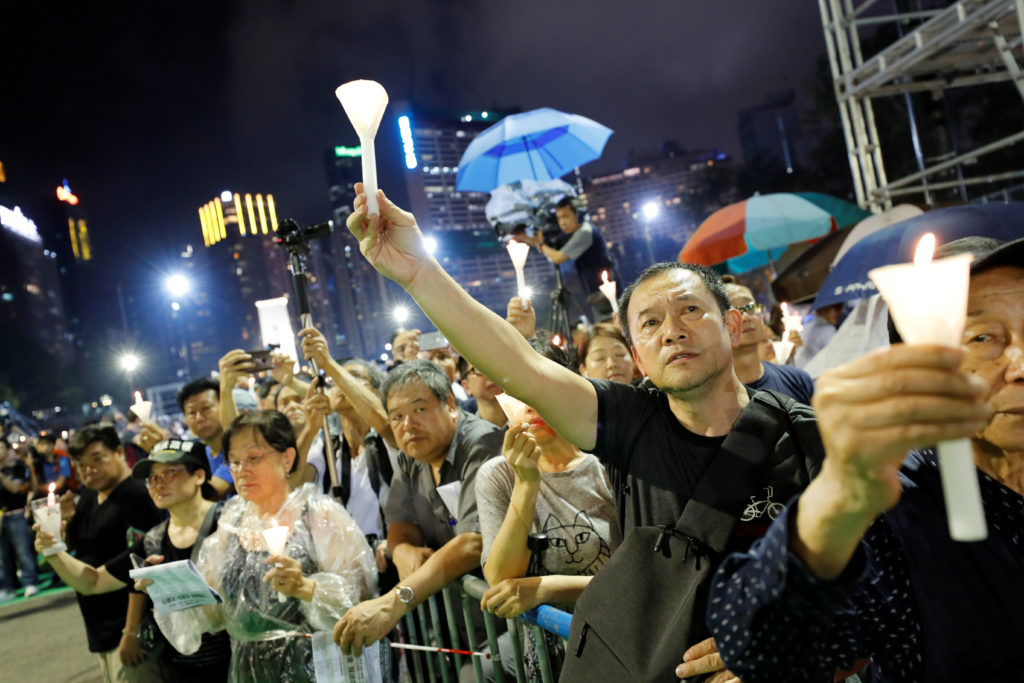 Thousands of people take part in a candlelight vigil to mark the 30th anniversary of the crackdown of pro-democracy movement at Beijing’s Tiananmen Square in 1989, at Victoria Park in Hong Kong, China June 4, 2019. Photo by Tyrone Siu/Reuters

“They argue that Hong Kong needs to determine its own future. Hong Kong may need to seek independence from China and they believe that June 4 is a battleground,” Yuen said.

Thirty years ago, the Tiananmen protesters gained widespread support and sympathy from residents of Hong Kong, whose return to Chinese rule had been agreed upon just years earlier. Hong Kong supporters helped sustain the protests with donated funds and equipment and, following the crackdown, mobilized to smuggle wanted student leaders out of the country, sometimes with the assistance of organized crime groups known as triads.

The spirit of political activism has now passed to a younger generation, crystalizing in the 2014 Occupy protests, also known as the Umbrella Movement, which laid siege to Hong Kong government headquarters and paralyzed the city’s financial district for 79 days. 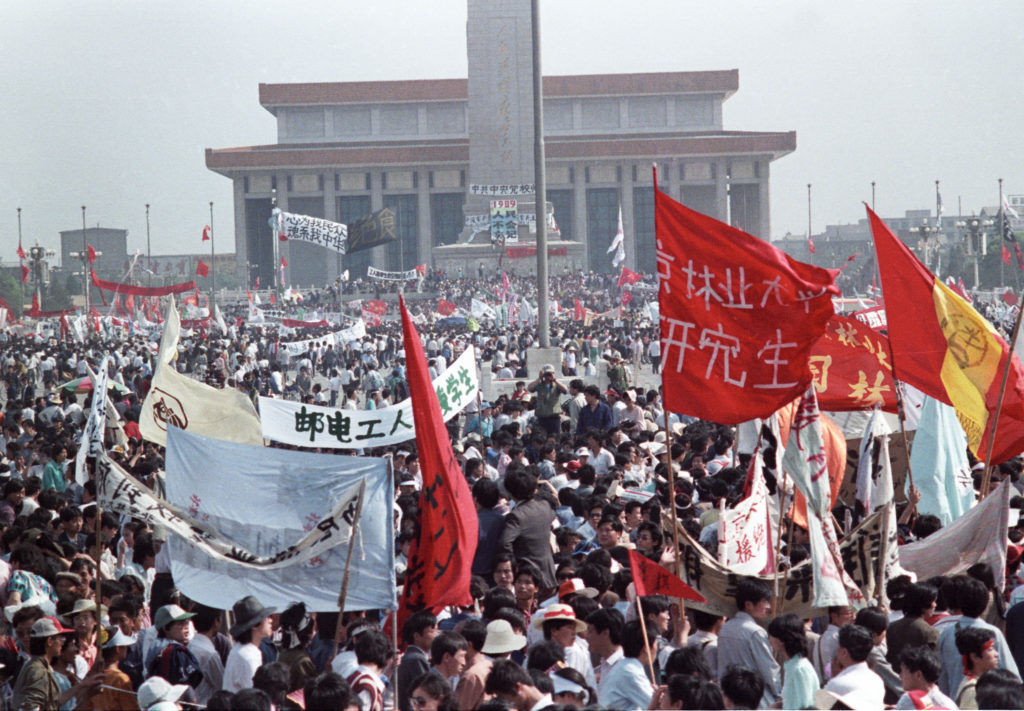 Hundreds of thousands of people fill Peking’s central Tiananmen Square May 17, 1989 in front of the Monument to People’s Heroes and Mao’s mausoleum in the biggest popular upheaval in China since the Cultural Revolution of the 1960’s. Photo by Ed Nachtrieb/Reuters

The movement fizzled with no concessions from the Hong Kong government for free elections, and the authorities have since cracked down hard on its leaders, sentencing nine in April on public nuisance and other charges.

More recently, activists, as well as business and legal associations, have protested amendments making it easier to send criminal suspects in Hong Kong to mainland China, where they could face vague national security charges and unfair trials.

Chinese President Xi Jinping has been seen as extending his crackdown on civil liberties to Hong Kong, threatening the territory’s promised semi-autonomy.

A march against the amendments is scheduled for Sunday ahead of the government’s expected push for passage on June 12.

Asked Tuesday whether she agreed with China’s justifications for the army crackdown in 1989, Lam did not answer directly, but said Hong Kong was a “very free society” that upholds the rights and freedoms of individuals.

“So today, if there are public gatherings to express their views and feelings on a particular historic incident, we fully respect those views,” Lam said.

In an opinion essay in Tuesday’s New York Times, Wong said that “the situation is dire” in Hong Kong. “The Chinese government keeps repressing, but people keep resisting,” he wrote.

Wong was to speak at a seminar marking the Tiananmen crackdown hosted by the Germany’s opposition Greens party.

Meanwhile in Taiwan, hundreds of people gathered in the self-governing island’s capital, Taipei, on Tuesday to mark the Tiananmen anniversary. The crowd was addressed by activists and Taiwan’s vice president.

Tsai said China had shown that it not only had no intention of reflecting on “that year’s mistake” but also planned to continue covering up the truth about the 1989 crackdown. 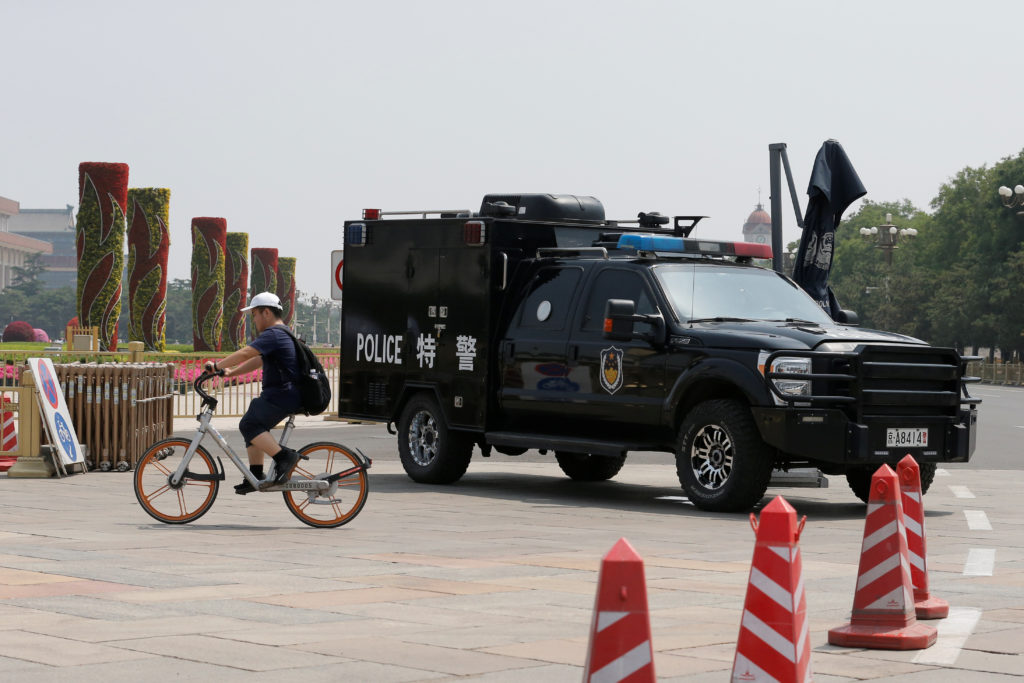 A police vehicle is deployed in Tiananmen Square in Beijing, China June 4, 2019. Photo by Thomas Peter/Reuters

She cited comments Sunday by China’s defense minister at a forum in Singapore defending the army’s bloody assault on protesters and Beijing citizens, as well as Hong Kong’s refusal to allow entry to former student leader Feng Congde.

“Please rest easy, Taiwan will absolutely adhere to democracy, adhere to freedom, regardless of threats or infiltration. As long as I am president for just one day, there is no way Taiwan will yield to pressure,” Tsai wrote.

China considers Taiwan its own territory to be annexed by force if necessary. Beijing has proposed ruling Taiwan under the same “one country, two systems” formula applied to Hong Kong, something the islands voters have overwhelmingly rejected.

Left: Thousands of people take part in a candlelight vigil to mark the 30th anniversary of the crackdown of pro-democracy movement at Beijing's Tiananmen Square in 1989, at Victoria Park in Hong Kong, China June 4, 2019. Photo by Tyrone Siu/Reuters