HONG KONG — More than 2,000 people marched in Hong Kong on Sunday to mark 30 years since a pro-democracy protest in Beijing’s Tiananmen Square ended in bloodshed.

Demonstrators took to the streets holding yellow umbrellas that read “Support Freedom, Oppose Evil Laws.” Some people carried a black coffin, while others wheeled white crosses and the numbers 6 and 4 — a nod to the day on June 4, 1989, when leaders of China’s ruling Communist Party ordered the military to re-take Tiananmen Square from student-led protesters.

Hundreds, if not thousands, of unarmed protesters and onlookers were killed late on June 3 and in the early hours of June 4 as a result of the martial action.

Commemorations of the historic event are strictly banned in mainland China, and those who attempt to raise awareness of or merely discuss it are often punished by authorities. Groups such as the “Tiananmen Mothers” are pressured to stay quiet about the children they lost, while others are detained for making even subtle tributes to the occasion.

The semi-autonomous territory of Hong Kong, however, holds yearly vigils and other gatherings to remember the deceased and pay tribute to the spirit of the protests. 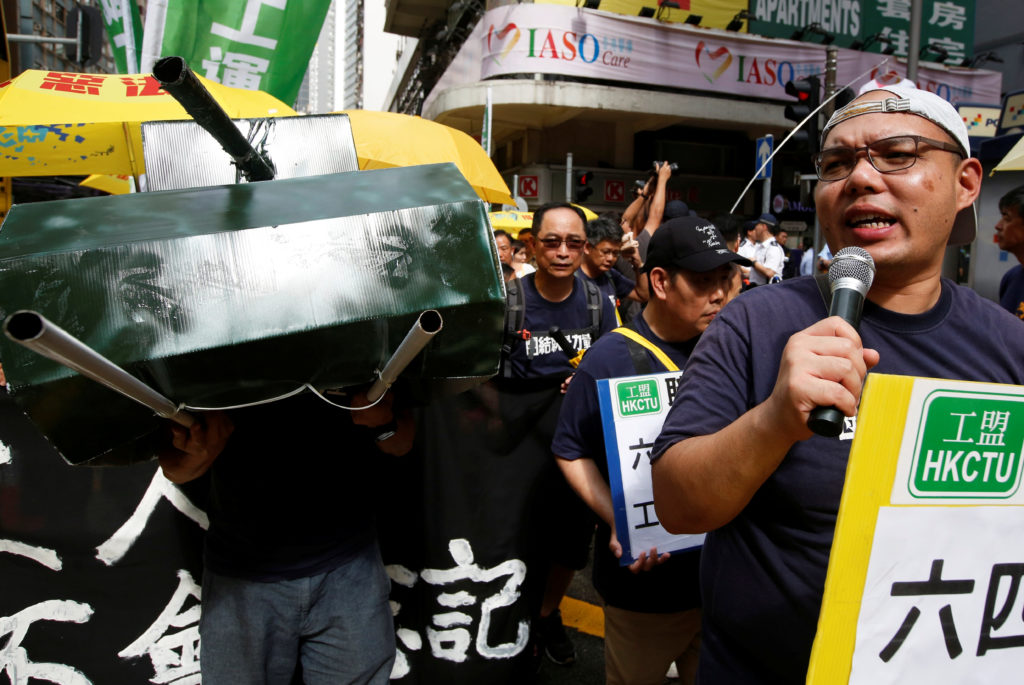 A protester carries a mock tank during a march ahead of June 4 anniversary of military crackdown on pro-democracy protesters in Tiananmen Square, in Hong Kong, China May 26, 2019. Photo By James Pomfret/Reuters

This year in Hong Kong, the march took on additional significance as opposition to changes to an extradition law widely seen as eroding the territory’s independent legal system.

Revisions to the law would make it easier to send criminal suspects to mainland China, where critics say they could face vague national security charges and unfair trials.

“Recently, we are facing the challenge of this (extradition law), which affects our basic freedom and liberty,” said Albert Ho, who organized Sunday’s march. He is chairman of the Hong Kong Alliance in Support of Patriotic Democratic Movements of China.

“The dedication and the commitment to fight for democracy and human rights is the only way out,” said Ho, who added that he hopes more people will become aware of the situation facing Hong Kong as legislators debate the proposed amendments.

Left: Protesters take part in a march ahead of June 4 anniversary of military crackdown on pro-democracy protesters in Tiananmen Square, in Hong Kong, China May 26, 2019. Photo By James Pomfret/Reuters