HONG KONG (AP) — As night fell in Hong Kong, police tightened a siege Monday at a university campus as hundreds of anti-government protesters trapped inside sought to escape.

Protesters advanced on the police from outside the cordon, while others emerged from the campus, their trademark umbrellas at the fore. Police in some places swooped in to subdue protesters and make arrests.

It wasn’t clear if any of those inside Hong Kong Polytechnic University escaped.

Hong Kong’s work week started with multiple protests that disrupted traffic, and schools remained closed because of safety concerns. There was a temporary lull in the pitched battles for control of the Polytechnic campus as the emphasis shifted from battering the protesters with tear gas and water cannons to waiting for them to come out.

For days, protesters have fortified the campus to keep police from getting in. Cornered by authorities, they were trying to get out. 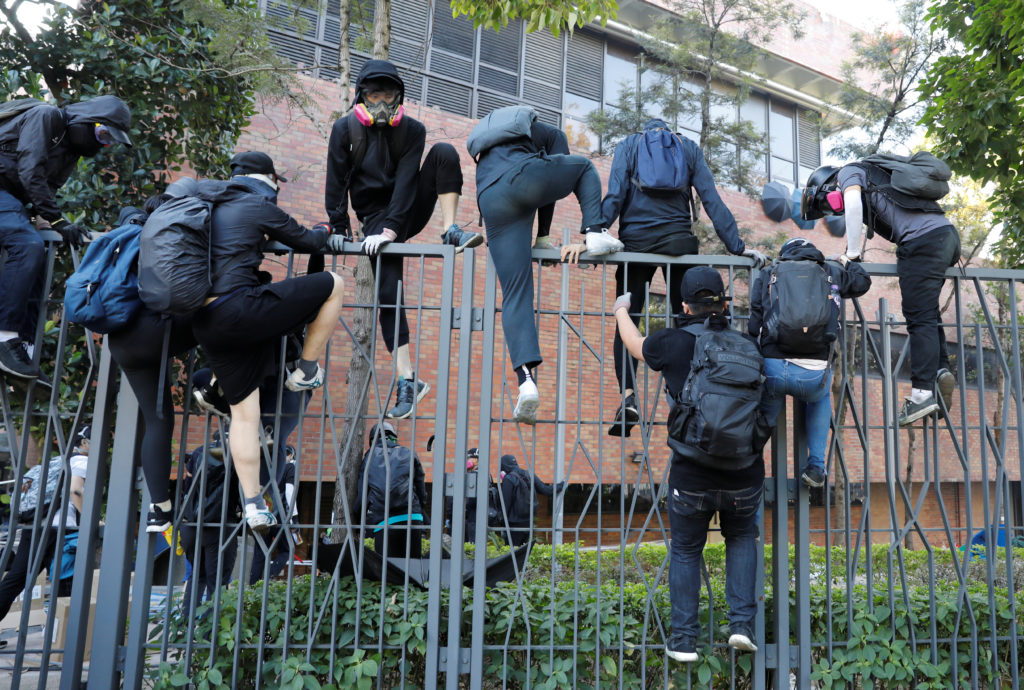 Protestor jump inside the Hong Kong Polytechnic University (PolyU) as they failed to leave the area after they were tear gassed by police during clashes in Hong Kong, China November 18, 2019. Photo by Adnan Abidi/Reuters

Officers repelled one attempt Monday morning with tear gas, driving a few hundred protesters back onto the campus.

The give-and-take has played out repeatedly during the city’s months of anti-government unrest. The protesters want to avoid arrest. The police want to pick up as many as they can.

“These rioters, they are also criminals. They have to face the consequences of their acts,” said Cheuk Hau-yip, the commander of Kowloon West district, where Polytechnic is located.

“Other than coming out to surrender, I don’t see, at the moment, there’s any viable option for them,” he said. 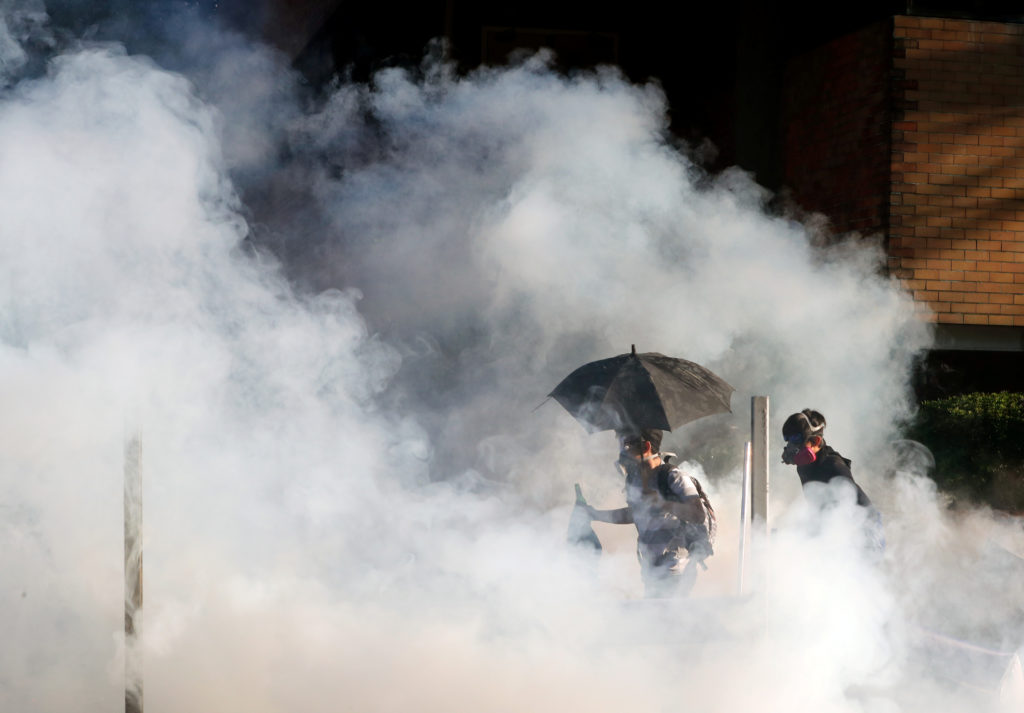 Cheuk said police have the ability and resolve to end the standoff peacefully so protesters should not “try their luck.”

Protesters won on a legal front when the high court struck down a mask ban imposed by the government last month. The court said it did not consider anti-mask laws unconstitutional in general, but in this case, the law infringed on fundamental rights further than was reasonably necessary.

Many protesters wear masks to shield their identities from surveillance cameras that could be used to arrest and prosecute them. The ban has been widely ignored, and police have charged protesters with wearing masks. 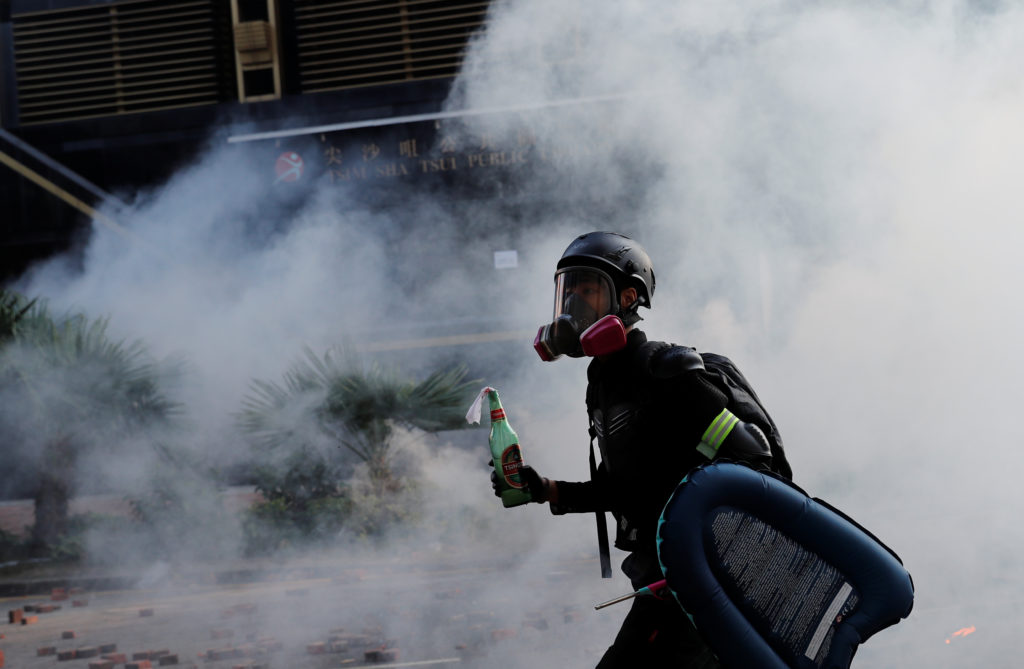 The protests started peacefully in early June, sparked by proposed legislation that would have allowed criminal suspects to be extradited to the mainland. But by the time the bill was withdrawn, the protests had hardened and broadened into a resistance movement against the territory’s government and Beijing.

Activists see the extradition bill as an example of Hong Kong’s eroding autonomy under Beijing’s rule since the 1997 handover from colonial power Britain.

The head of a nationalistic Chinese newspaper said Hong Kong police should use snipers to fire live ammunition at violent protesters.

“If the rioters are killed, the police should not have to bear legal responsibility,” Global Times editor Hu Xijin wrote on his Weibo social media account.

Anti-government protesters barricaded themselves inside Polytechnic last week. Police surrounded the area Sunday night and began moving in after issuing an ultimatum for people to leave the area. The crowd wore raincoats and carried umbrellas to shield themselves from police water cannons. 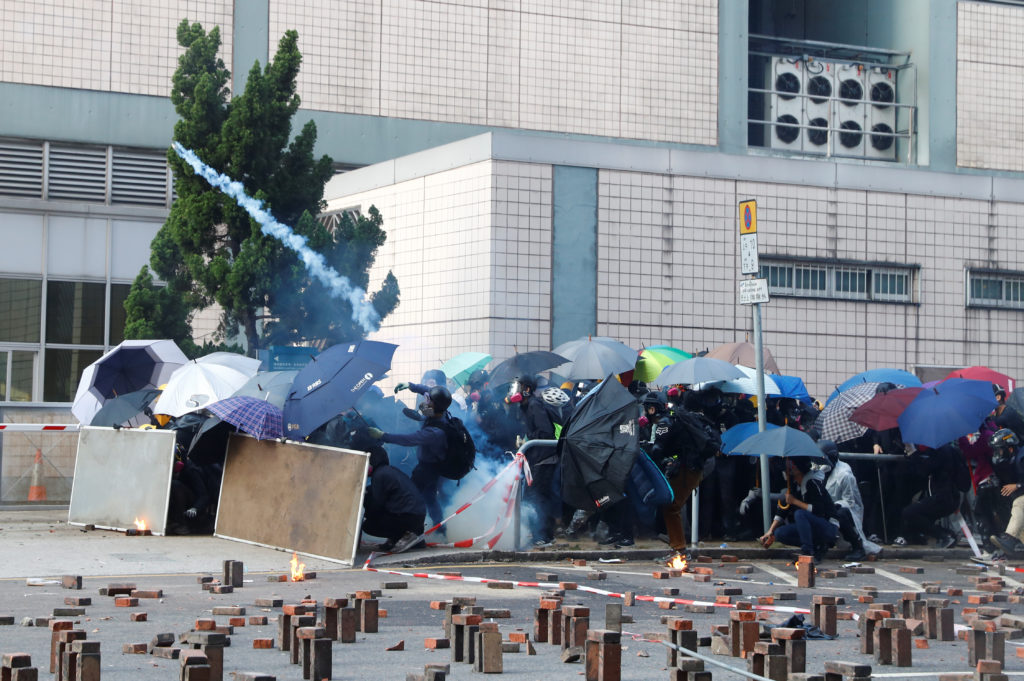 Riot officers broke in one entrance before dawn as fires raged inside and outside the school, but they didn’t appear to get very far. Fiery explosions occurred as protesters responded with gasoline bombs. Police, who have warned that everyone in the area could be charged with rioting, reportedly made a handful of arrests.

At daybreak, protesters remained in control of most of the campus. In one outdoor area, some demonstrators made gasoline bombs while others dozed while wearing gas masks. Two walked about with bows and quivers of arrows, while many stared at their smartphones.

“We are exhausted because we were up since 5 a.m. yesterday,” said a protester who gave only his first name, Matthew. “We are desperate because our supplies are running low.”

A lull settled on the area as the president of the university said in a video message that police have agreed to suspend their use of force.

Jin-Guang Teng said police would allow protesters to leave and he would accompany them to the police station to ensure their cases would be processed fairly.

“I hope that you will accept the proposed temporary suspension of force and leave the campus in a peaceful manner,” he said.

It seemed unlikely the protesters would accept the offer given that they would all likely be arrested. 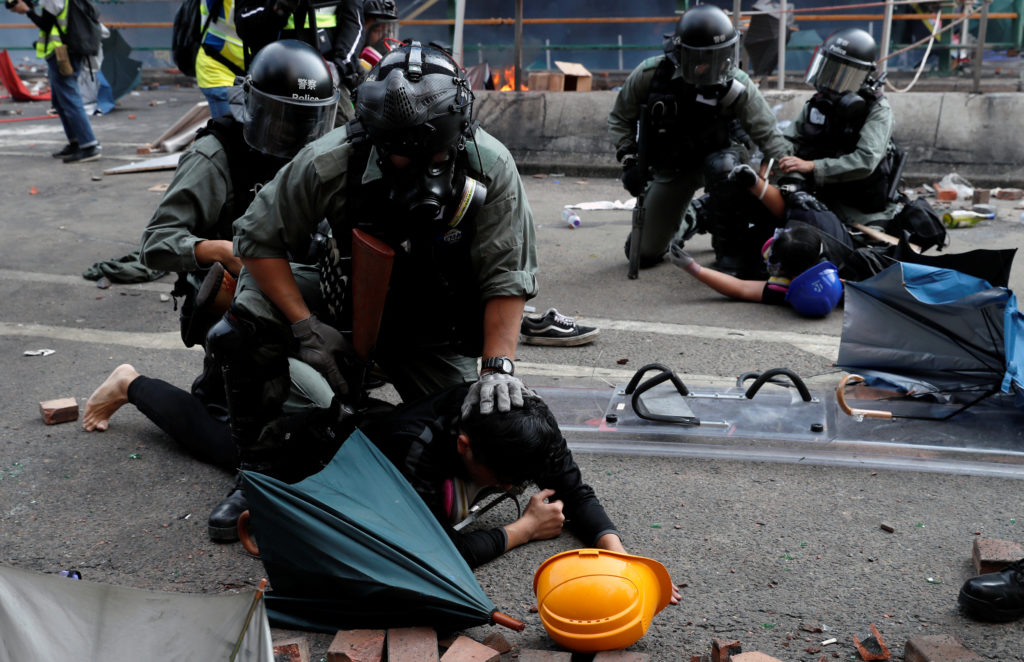 A few hundred streamed out of the campus about 8:15 a.m. in an apparent bid to escape, but they were driven back by police tear gas. Some wearing gas masks calmly picked up smoking tear gas canisters and dropped them into heavy-duty bags, but the protesters decided to retreat with a phalanx of officers lined up across the road in the distance.

Police have set up a dragnet around the campus to try to arrest protesters, who typically try to melt away after blocking traffic or causing other disruption before police run in to grab as many as they can.

Other protesters blocked a major road not far from the Polytechnic campus to distract police and help those inside the campus escape.

They tossed paving stones onto stretches of Nathan Road as police chased them with tear gas.

An injured woman arrested at a Nathan Road intersection for participating in an unlawful assembly escaped after protesters stopped her ambulance and hurled rocks and bricks inside. 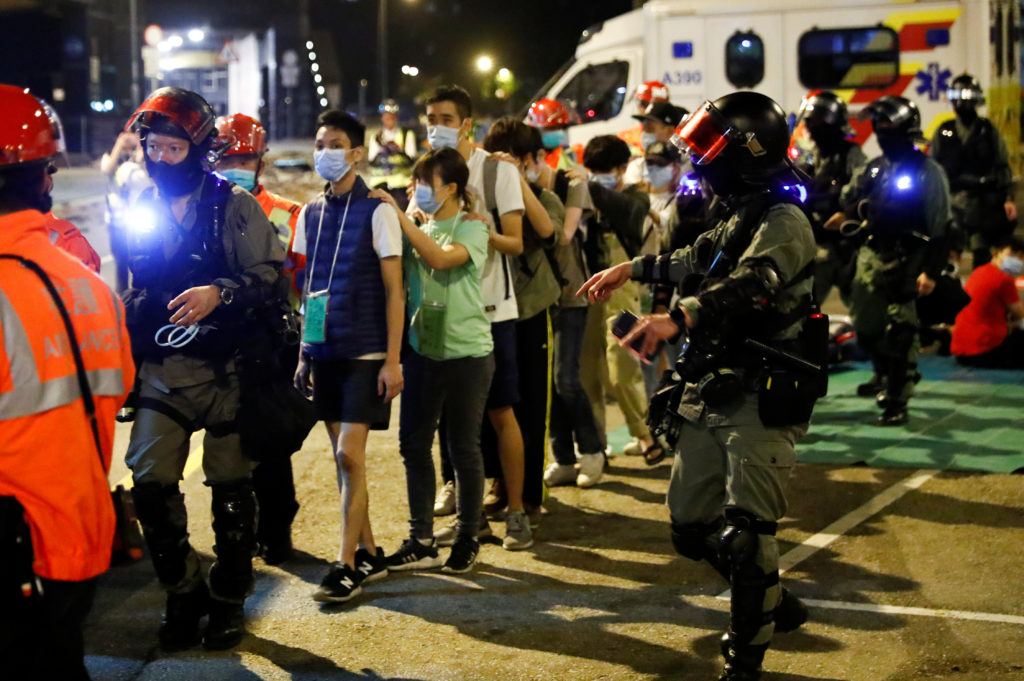 Protesters are escorted by police out of the campus of Hong Kong Polytechnic University (PolyU) during clashes with police in Hong Kong, China November 18, 2019. Photo by Thomas Peter/Reuters

Police issued a “wanted” notice for the 20-year-old woman and said anyone who aided her could be charged with assisting an offender, which can be punished by up to 10 years in prison.

The road closure added to transport woes during the morning commute, with several train stations still closed because of damage by protesters last week and a section of one line closed completely near Polytechnic.

The Education Bureau announced that classes from kindergarten to high school would be suspended for the sixth straight day Tuesday because of safety concerns. Most classes are expected to resume Wednesday, except for kindergarten and classes for the disabled, which are suspended until Sunday, the bureau said.

Left: A protester is detained by riot police while attempting to leave the campus of Hong Kong Polytechnic University (PolyU) during clashes with police in Hong Kong, China November 18, 2019. Photo by Thomas Peter/Reuters