PHOTOS: New Year’s celebrations around the world usher in a new decade

Revelers around the globe are bidding farewell to a decade that will be remembered for the rise of social media, the Arab Spring, the #MeToo movement and, of course, President Donald Trump.

Fireworks burst and confetti fell as throngs of revelers cheered the start of 2020 in New York City’s Times Square.

In one of the globe’s most-watched New Year’s Eve spectacles, the crowd counted down the last seconds of 2019 as a luminescent crystal ball descended down a pole. 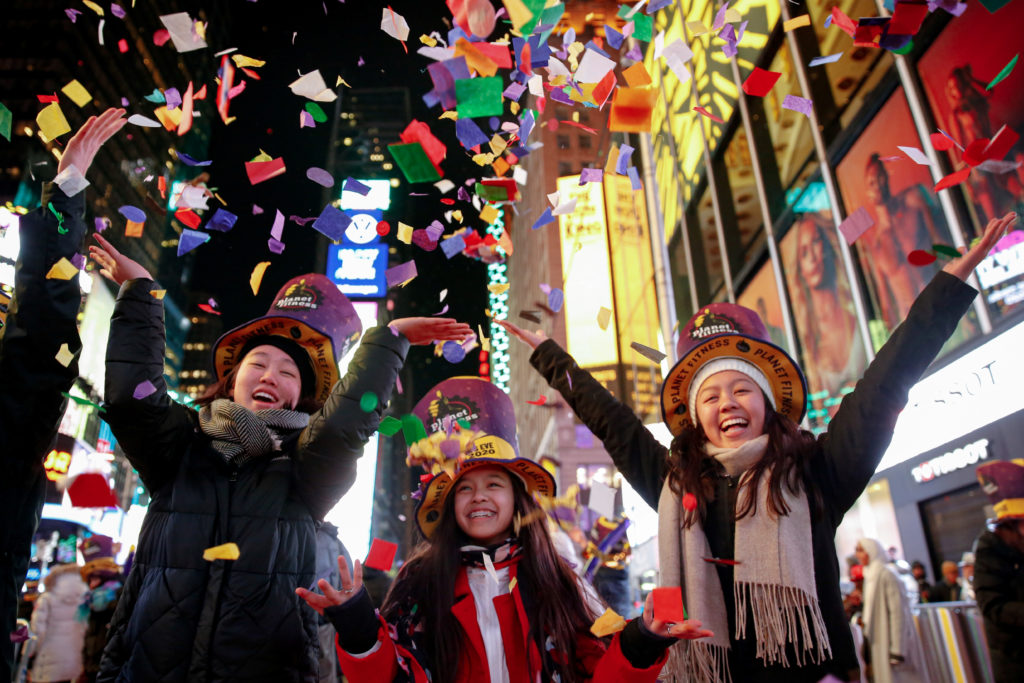 About 3,000 pounds (1,360 kilograms) of confetti showered the sea of attendees, many of whom were also briefly rained on earlier in the evening as they waited in security pens for performances by stars including rap-pop star Post Malone, K-pop group BTS, country singer Sam Hunt and singer-songwriter Alanis Morissette.

The crowds packed into the heart of Manhattan mouthed lyrics and waved yellow and purple balloons in a frenzy as midnight approached.

“It was a dream, I wanted to do it so this year a lot of people helped me to get here so I’m here, and I’m thankful for that,” said Mariemma Mejias, 48, who flew to New York for the festivities from San Juan, Puerto Rico.

The fun was evident, but some important global issues were driven home as well.

About 3 million people welcomed 2020 at Brazil’s iconic Copacabana beach as almost 34,000 pounds (15,420 kilograms) of colorful fireworks went off for 14 minutes after midnight. 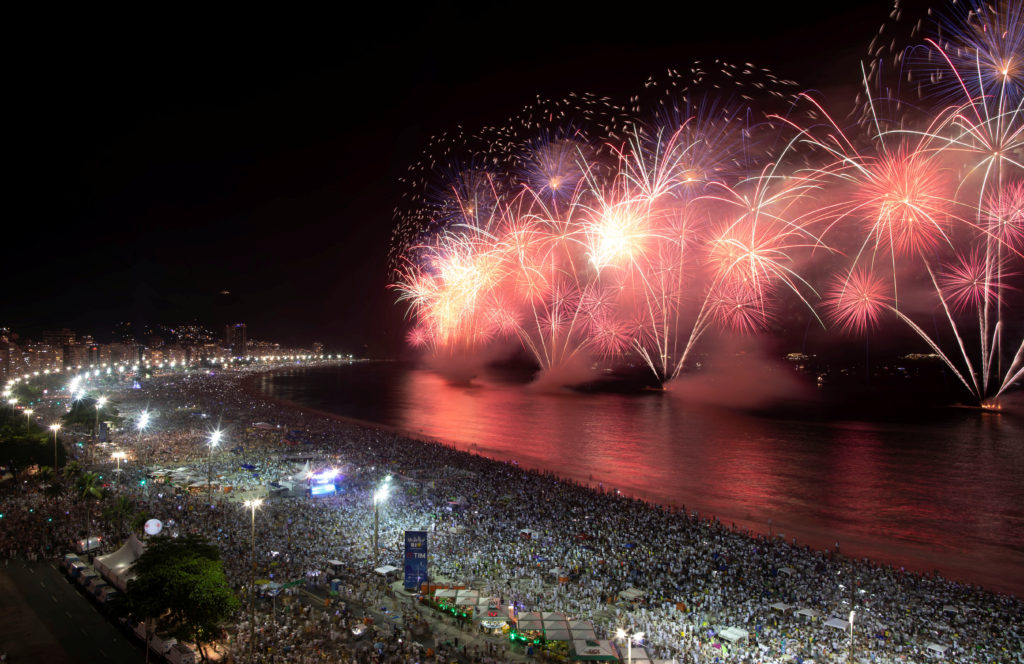 Rio de Janeiro holds one of the biggest New Year parties in the world, with music, drinks and religious rituals on the shores. Many dress in white in a traditional sign of their hope for peace. About 2,000 policemen are working to ensure party-goers are safe. Authorities say only minor incidents have been reported so far.

Many locals and tourists are expected to stick around Copacabana until Wednesday’s sunrise for their first dip of the year in the ocean, expecting to wash away their troubles from 2019. Summer in Rio often brings high temperatures early on.

The party in Sao Paulo, Brazil’s metropolis, took about 2 million people to Paulista Avenue, the city’s main road. Nearly all the 6,000 pounds (2,720 kilograms) of fireworks used there were silent so pets did not get too bothered by the noise.

A joyful crowd of Parisians and tourists walked, biked and used scooters to reach the Champs-Elysees for the new year celebrations, in a city with almost no public transport amid massive strikes.

Revelers converged at the famous avenue to watch a light show at the Arc de Triomphe, followed by a fireworks display at midnight. Paris police set up a security perimeter around the Champs-Elysees area with a ban on alcohol and traffic restrictions. 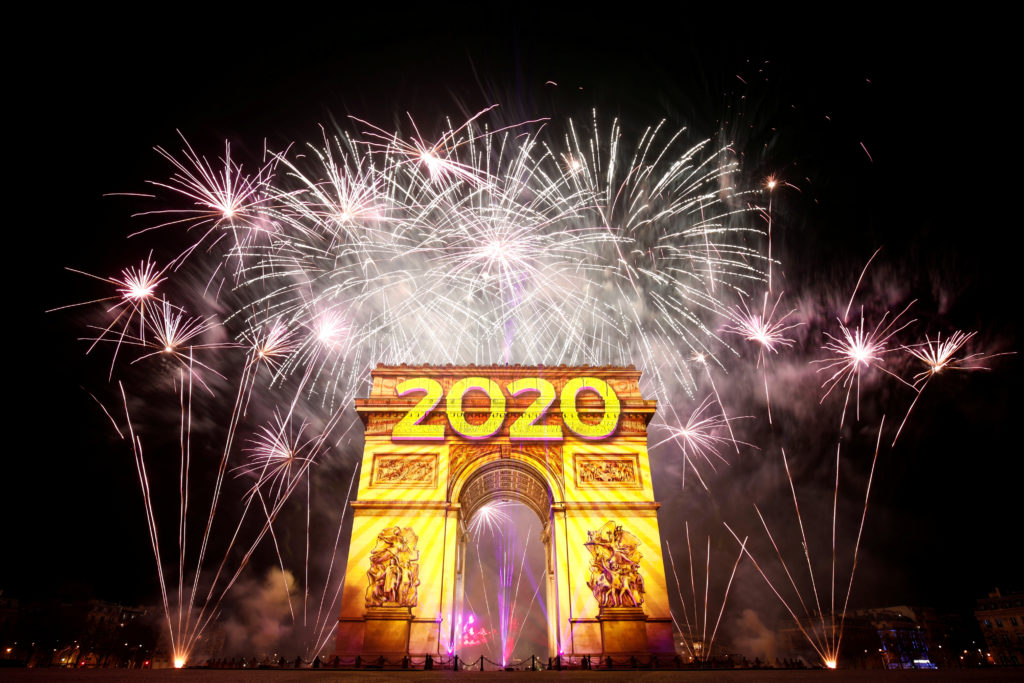 Fireworks illuminate the sky over the Arc de Triomphe during the New Year’s celebrations on the Champs Elysees in Paris, France January 1, 2020. Photo by Benoit Tessier/Reuters

All metro lines in the French capital were closed except for two automatic lines, and only a few night buses were running, as Tuesday marked the 27th consecutive day of transport strikes against President Emmanuel Macron’s plans to overhaul the French pension system.

Revelers as well as pro-democracy protesters flocked to sites across Hong Kong to usher in 2020.

The semi-autonomous Chinese city has toned down New Year’s celebrations amid the monthslong demonstrations. The protests have repeatedly sparked pitched battles with police and have taken their toll on Hong Kong’s nightlife and travel industries. 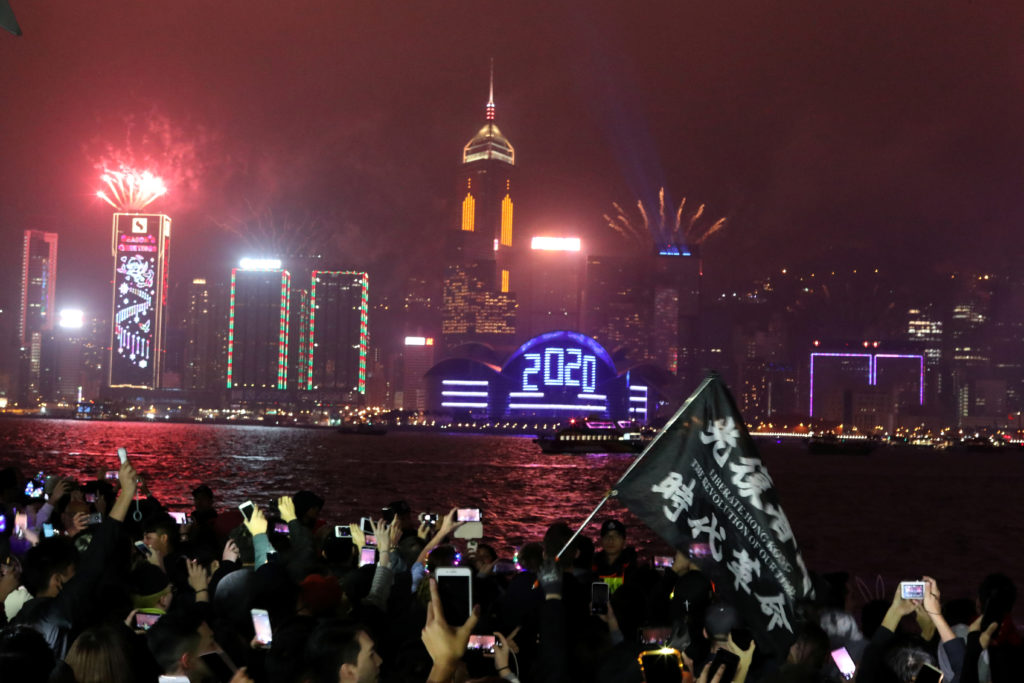 A fireworks display that traditionally lights up famed Victoria Harbor was canceled amid safety concerns, while some roads were closed and barriers set up in the Lan Kwai Fong nightlife district to control crowds.

Russians began the world’s longest continuous New Year’s Eve with fireworks and a message from President Vladimir Putin urging them to work together in the coming year.

Putin made the call in a short speech broadcast on television just before the stroke of midnight in each of Russia’s 11 time zones. The recorded message was followed by an image of the Kremlin Clock and the sound of its chimes. State TV showed footage of extensive festive fireworks in cities of the Far East. 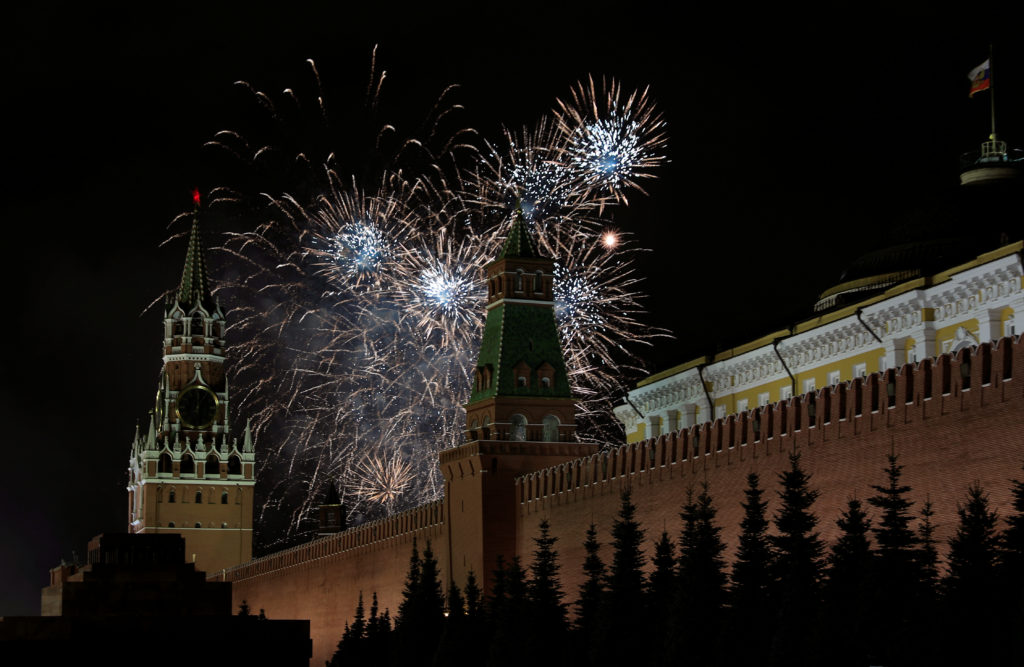 Fireworks explode in the sky over the Kremlin during the New Year’s celebrations in Moscow, Russia January 1, 2020. Photo by Tatyana Makeyeva/Reuters

But one holiday tradition was missing in Moscow this year — a picturesque layer of snow. The Russian capital has had an unusually warm December and temperatures in central Moscow as midnight approached were just above freezing.

Thousands of South Koreans filled cold downtown streets in Seoul ahead of a traditional bell-tolling ceremony near City Hall to send off an exhausting 2019 highlighted by political scandals, decaying job markets and crumbling diplomacy with North Korea. 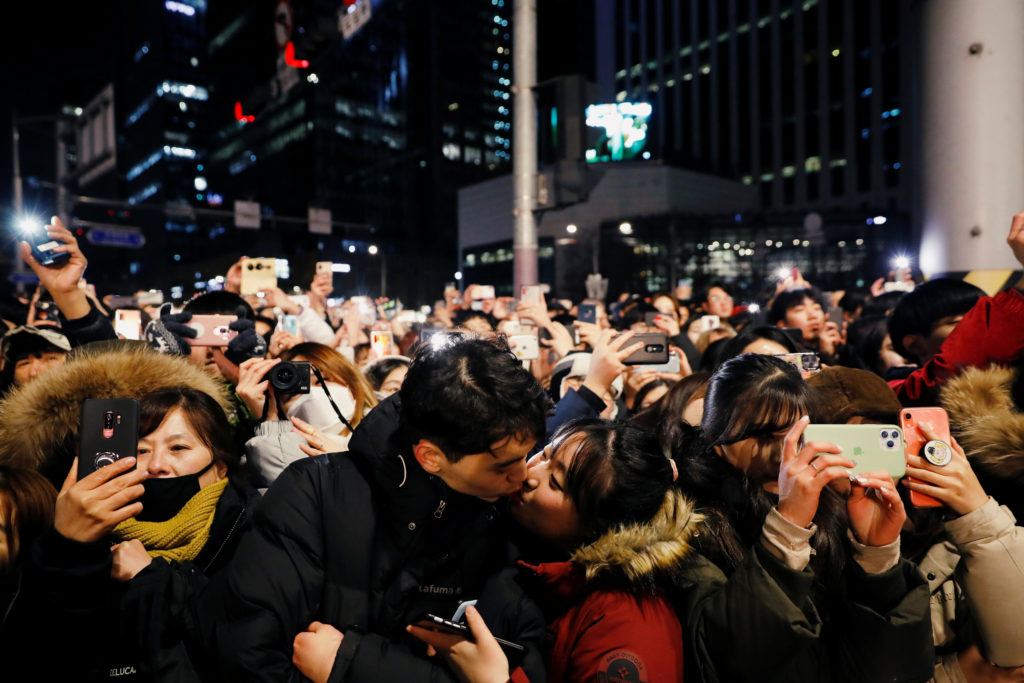 A couple kisses as they attend a ceremony to celebrate the new year in Seoul, South Korea January 1, 2020. REUTERS/Kim Hong-Ji

Dignitaries ringing the old Bosingak bell at midnight included South Korean Major League Baseball pitcher Hyun-Jin Ryu and Pengsoo, a giant penguin character with a gruff voice and blunt personality that emerged as one of the country’s biggest TV stars in 2019.

More than a million people descended on a hazy Sydney Harbour and surrounding areas ahead of the ringing in of the new year despite the ongoing wildfire crisis ravaging New South Wales, Australia’s most populous state.

The 9 p.m. fireworks over Sydney’s iconic landmarks was briefly delayed due to strong winds, but revelers clearly enjoyed themselves in a desperately needed tonic for the state. 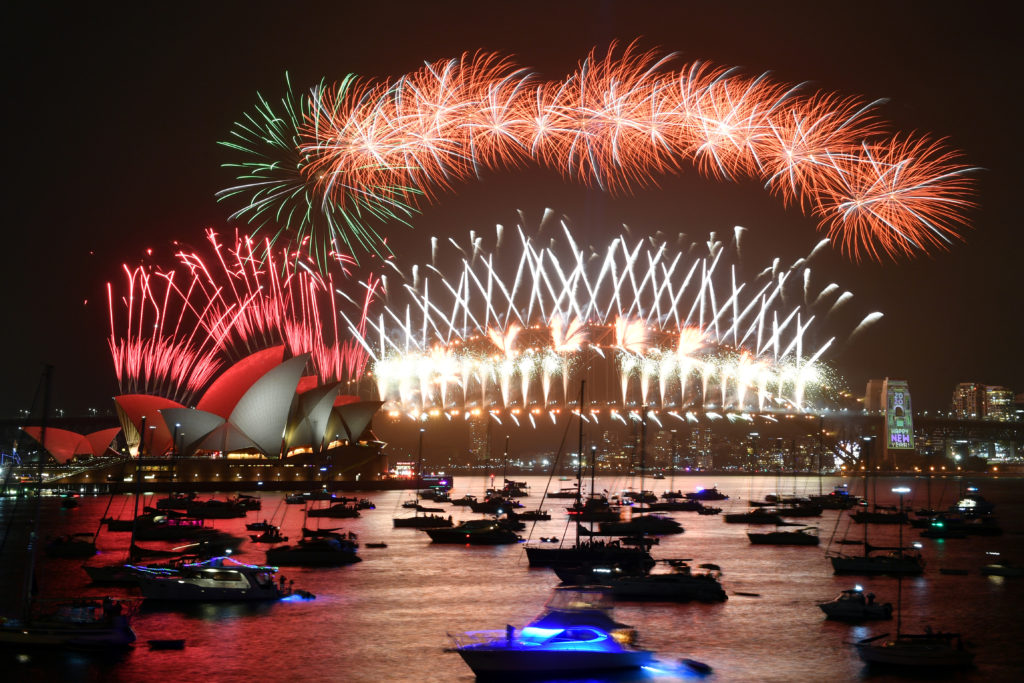 New South Wales has copped the brunt of the wildfire damage, which has razed more than 1,000 homes nationwide and killed 12 people in the past few months.

New Zealand’s major cities greeted the new year with fireworks as the nation appeared happy to be done with a year of challenges, both natural and man-made.

On March 15, a lone gunman identified killed 51 people and wounded dozens at two mosques in the South Island city of Christchurch. In December, an eruption of volcanic White Island off the east coast of the North Island killed at least 19 tourists and tour guides.

Londoners watched a spectacular fireworks display from the banks of the River Thames that was launched from the London Eye and barges near Parliament.

The familiar chimes of London’s Big Ben clock tower rung in the new year, even though they have been silent for most of 2019 because of extensive restoration work. 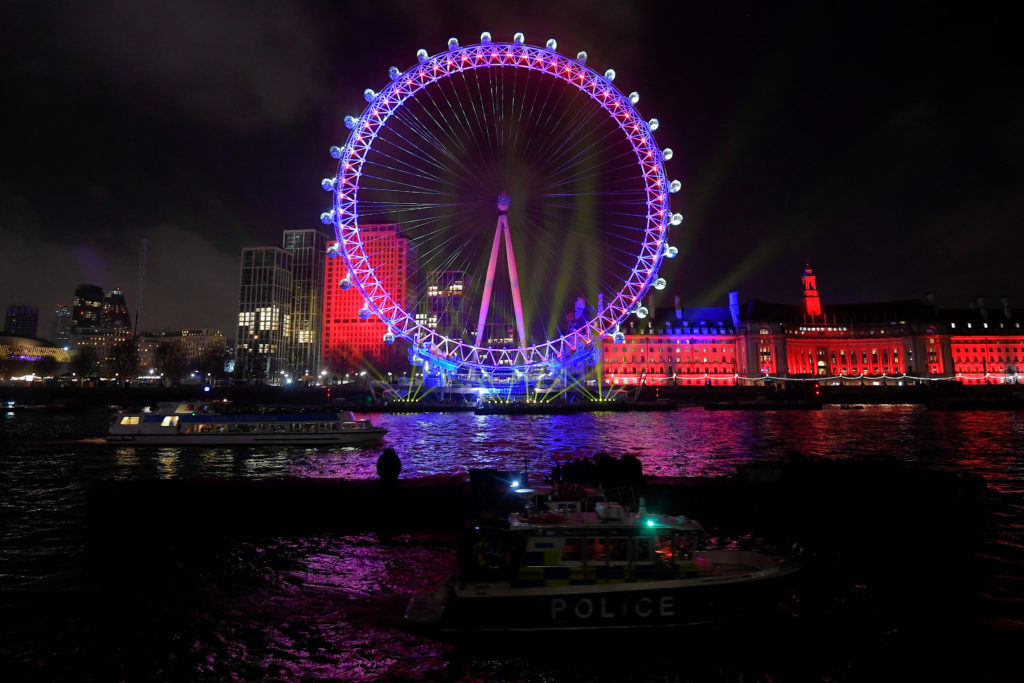 A police boat patrols the Thames river in front of the London Eye ahead of the New Year’s fireworks event, in central London, Britain December 31, 2019. Photo by Toby Melville/Reuters

To the north, the multi-day Hogmanay New Year’s celebrations in Edinburgh began Monday night with a torchlight parade through the streets of the Scottish capital.

Security was tight in both cities and elsewhere in Britain following a recent extremist attack on London Bridge that claimed two lives. Police arrested five men on suspicion of terrorism offenses Monday but said the arrests were not related to the London Bridge attack or to celebrations.

In Samoa, New Year’s Eve was more somber than usual. While fireworks erupted at midnight from Mount Vaea, overlooking the capital, Apia, the end of the year was a time of sadness and remembrance.

A measles epidemic in late 2019 claimed 81 lives, mostly children under 5.

More than 5,600 measles cases were recorded in the nation of just under 200,000. With the epidemic now contained, the Samoa Observer newspaper named as its Person of the Year health workers who fought the outbreak.

For nearly 10 minutes, fireworks lit the sky over Dubai’s Burj Khalifa, the world’s tallest building, as hundreds of thousands gathered downtown to watch the spectacular display.

The New Year’s Eve display at the 828-meter-tall (2,716-foot-tall) skyscraper was just one of seven different fireworks shows across the emirate. Tourists, especially from Europe and Russia, flocked to the sunny beaches of Dubai at this time of year to escape the cold, dark winter. 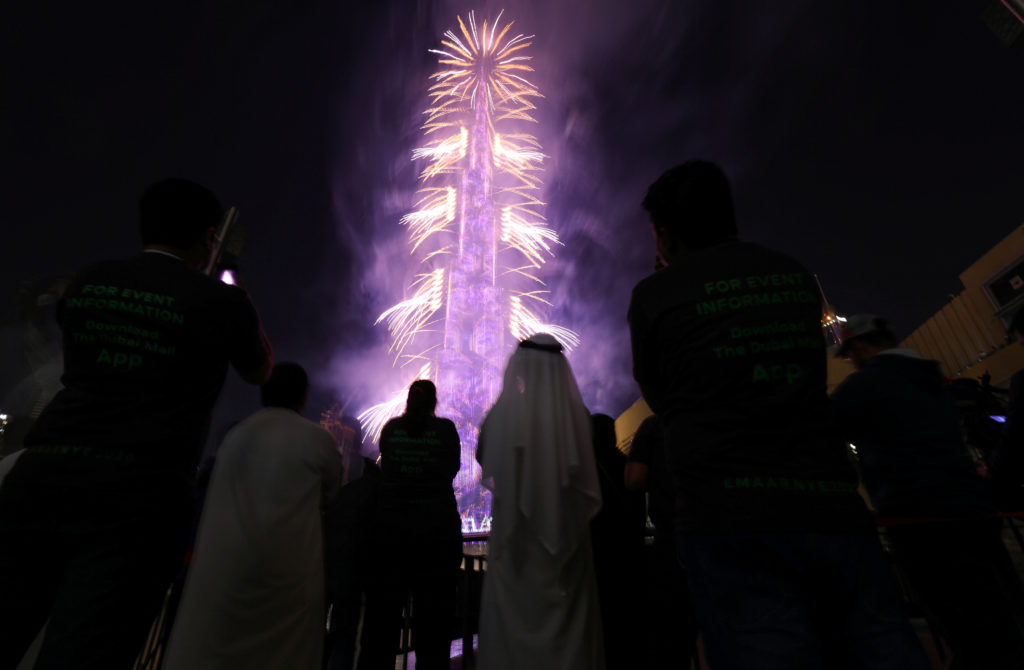 To keep the massive crowds safe, police created walkways around the Burj Khalifa tower for male-only groups to separate them from families and women.

Dubai this year will be hosting Expo 2020, a world fair that brings the most cutting-edge and futuristic technologies.

Thousands of revelers gathered at Cape Town’s Waterfront area to ring in the new year with music, dancing and fireworks in front of the city’s iconic Table Mountain.

In past years, residents of Johannesburg’s poor Hillbrow neighborhood would celebrate the New Year by tossing furniture, appliances and even refrigerators from the balconies of high-rise apartment buildings. Police have issued stern warnings and it appears the dangerous tradition has declined.

In a somber statement, President Cyril Ramaphosa said “while our economy created jobs, these have not been nearly enough to stop the rise in unemployment or the deepening of poverty.”

South African singer Yvonne Chaka Chaka was deported from Uganda, where she was to perform at a New Year’s Eve event. Ugandan police cited visa issues, but Ugandan media reported it was because she had voiced support for Ugandan pop star Bobi Wine, the most potent opposition challenger to President Yoweri Museveni.

Pope Francis delighted tourists and Romans in St. Peter’s Square on Tuesday night when he took a stroll to admire the Nativity scene set up for the holidays. Shouts of “Pope! Pope!” and “Happy New Year!” resounded as families rushed to catch a glimpse of him or thrust out their infant in hopes he would pat their heads or pinch their cheeks. 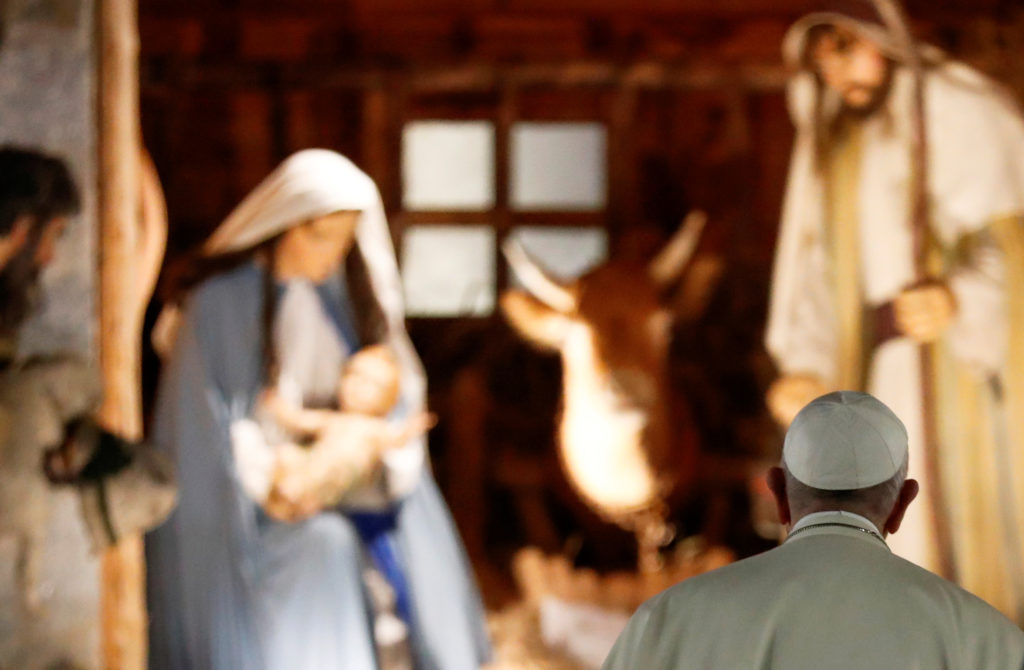 Pope Francis visits the nativity scene in Saint Peter’s Square after the Vespers and Te Deum prayer, at the Vatican, December 31, 2019. Photo by Yara Nardi/Reuter

One woman grabbed the pope’s hand and pulled him toward her to shake it. Francis, 83, exclaimed and then struck the woman’s hand twice to free his hand.

At a New Year’s Eve Vespers service in St. Peter’s Basilica, Francis urged people to practice more solidarity and to “build bridges, not walls.” Since becoming pontiff in 2013, Francis has preached openness — a reform-minded agenda that has irritated a small but vocal group of ultra-conservatives in the church.

People flocked to temples and shrines in Japan, offering incense with their prayers to celebrate the passing of a year and the the first New Year’s of the Reiwa era. 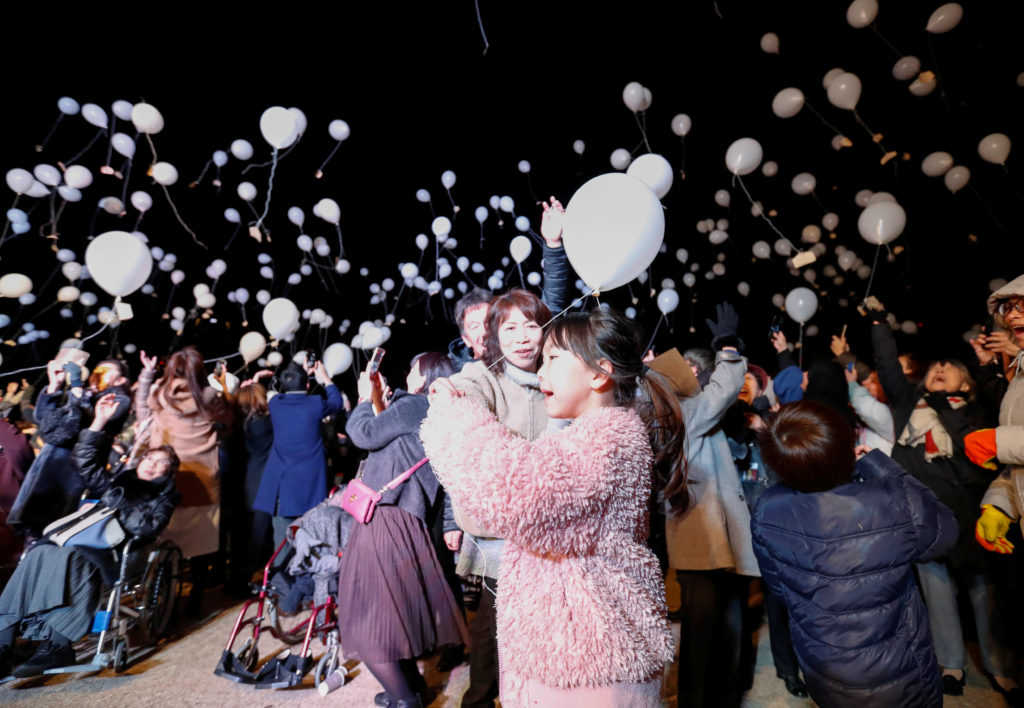 Under Japan’s old-style calendar, linked to emperors’ rules, Reiwa started in May, after Emperor Akihito stepped down and his son Naruhito became emperor. Although Reiwa is entering its second year with 2020, Jan. 1 still marks Reiwa’s first New Year’s, the most important holiday in Japan.

Stalls at Zojoji Temple in Tokyo sold sweet rice wine, fried noodles and candied apples, as well as little amulets in the shape of mice, the zodiac animal for 2020. Since the Year of the Mouse starts off the Asian zodiac, it’s associated with starting anew.

Tokyo will host the 2020 Summer Olympics, an event that is creating much anticipation for the entire nation.

Tens of thousands of revelers in Indonesia’s capital of Jakarta were soaked by torrential rains as they waited for New Year’s Eve fireworks while others in the country were wary of an active volcano. 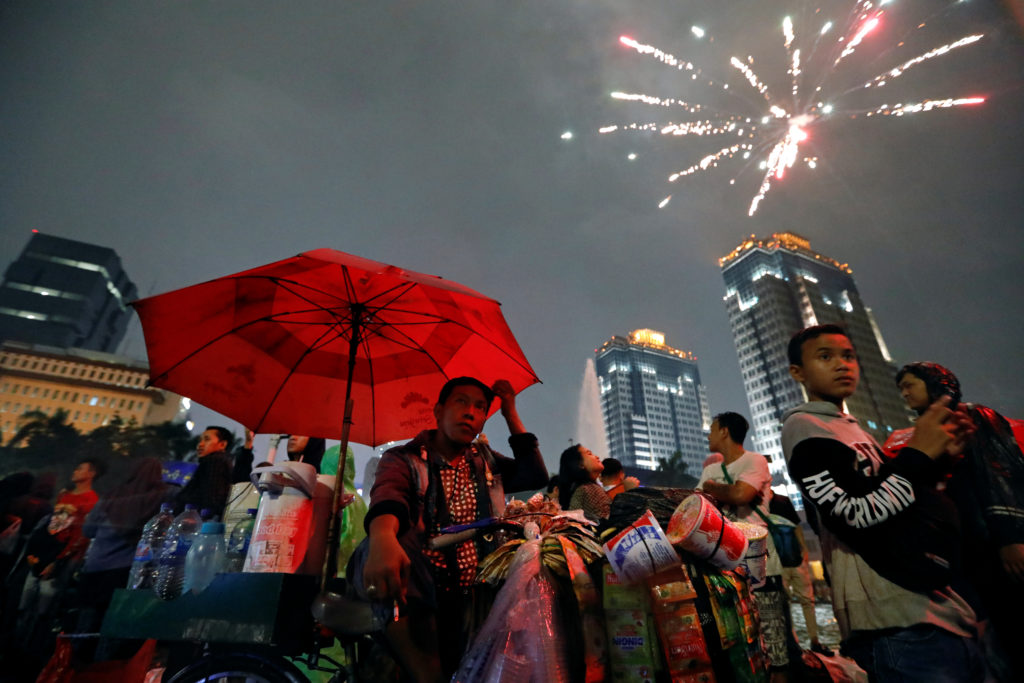 Festive events along coastal areas near the Sunda Strait were dampened by a possible larger eruption of Anak Krakatau, an island volcano that erupted last year just ahead of Christmas Day, triggering a tsunami that killed more than 430 people.

The country’s volcanology agency has warned locals and tourists to stay 2 kilometers (1.3 miles) from the volcano’s crater following an eruption Tuesday that blasted ash and debris up to 2,000 meters (6,560 feet) into the air.

Susan Page and Domenico Montanaro on the decade in politics