Photos: Students around the world go on ‘strike’ for climate change

BERLIN — From the South Pacific to the edge of the Arctic Circle, students mobilized by word of mouth and social media skipped class Friday to protest what they believe are their governments’ failure to take tough action against global warming.

Since then, the weekly protests have snowballed from a handful of cities to hundreds, fueled by dramatic headlines about the impact of climate change during the students’ lifetime.

Thunberg, who was recently nominated for the Nobel Peace Prize, said at a rally in Stockholm that the world faces an “existential crisis, the biggest crisis humanity ever has faced and still it has been ignored for decades by those that have known about it.

“And you know who you are, you that have ignored this and are most guilty of this,” she said, as protesters cheered her name.

Friday’s rallies were one of the biggest international actions yet. Protests were underway or planned in cities in more than 100 countries, including Hong Kong; New Delhi; Wellington, New Zealand; and Oulu, Finland. 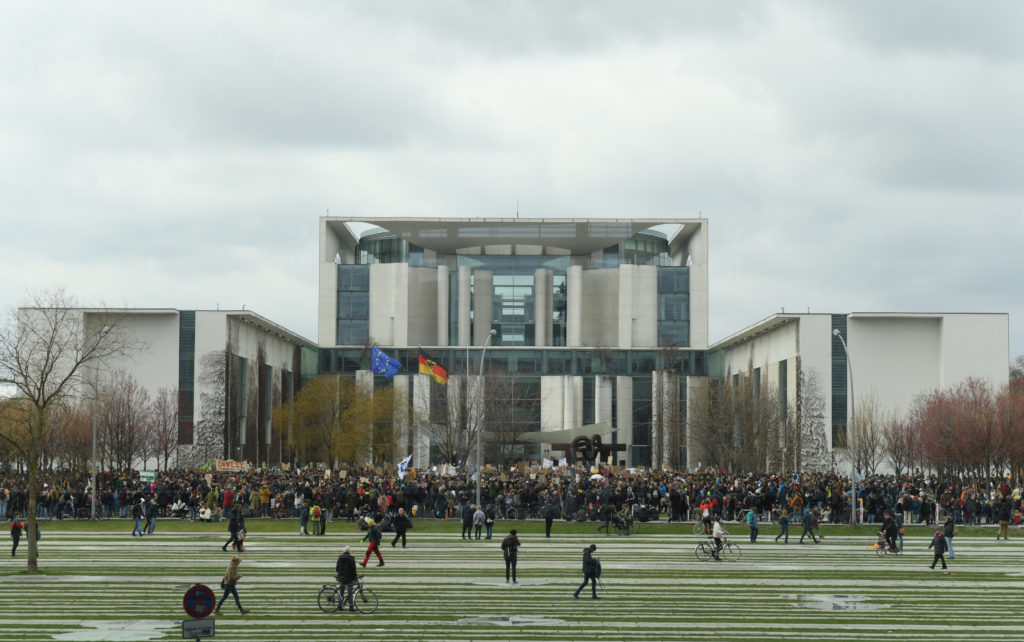 Protestors are seen in front of the Chancellery for climate change during the “Fridays for Future” school strike in Berlin, Germany. Photo by Annegret Hilse/Reuters

In Berlin, police said as many as 20,000 protesters, most of them young students, gathered in a downtown square, waving signs with slogans such as “March now or swim later” and “Climate Protection Report Card: F,” before marching through the capital’s government quarter with a stop in front of Chancellor Angela Merkel’s office.

In Poland, thousands marched in rainy Warsaw and other cities to demand a ban on the burning of coal, which is a major source of carbon dioxide. Some wore face masks as they carried banners that read “Today’s Air Smells Like the Planet’s Last Days” and “Make Love Not CO2.” 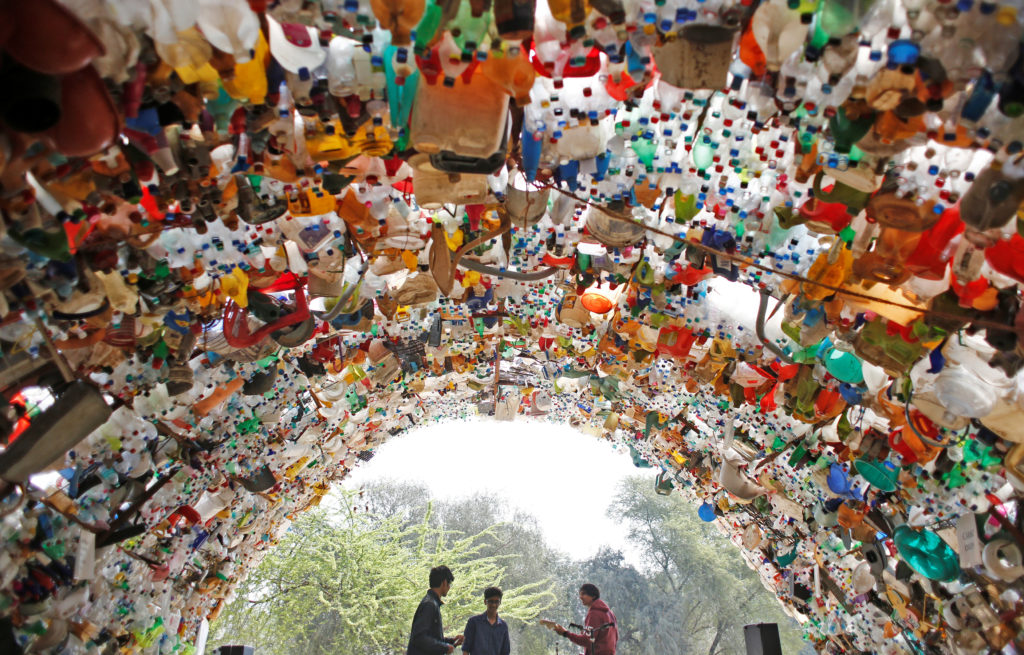 Students perform under a shade made from used plastic bottles as they take part in a global protest against climate change in Gurugram, India. Photo by Adnan Abidi/Reuters 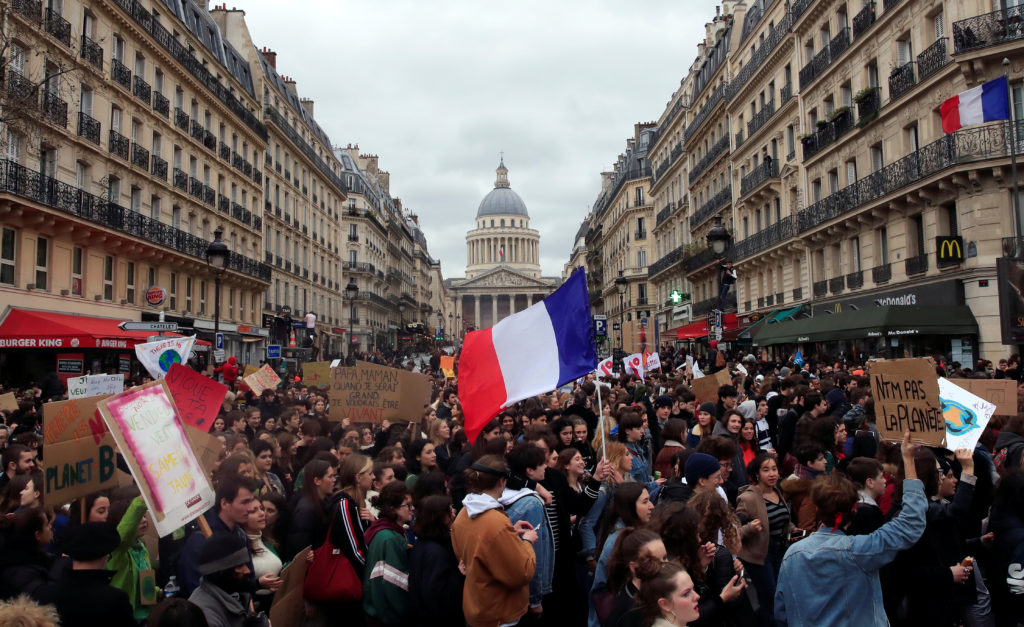 “Now or Never” was among signs brandished by enthusiastic teenagers thronging cobblestoned streets around the domed Pantheon building, which rises above the Left Bank in Paris. Several thousand students gathered peacefully around the landmark. Some targeted President Emmanuel Macron, who sees himself as the guarantor of the Paris climate accord but is criticized by activists for being too business friendly and not ambitious enough in efforts to reduce French emissions. 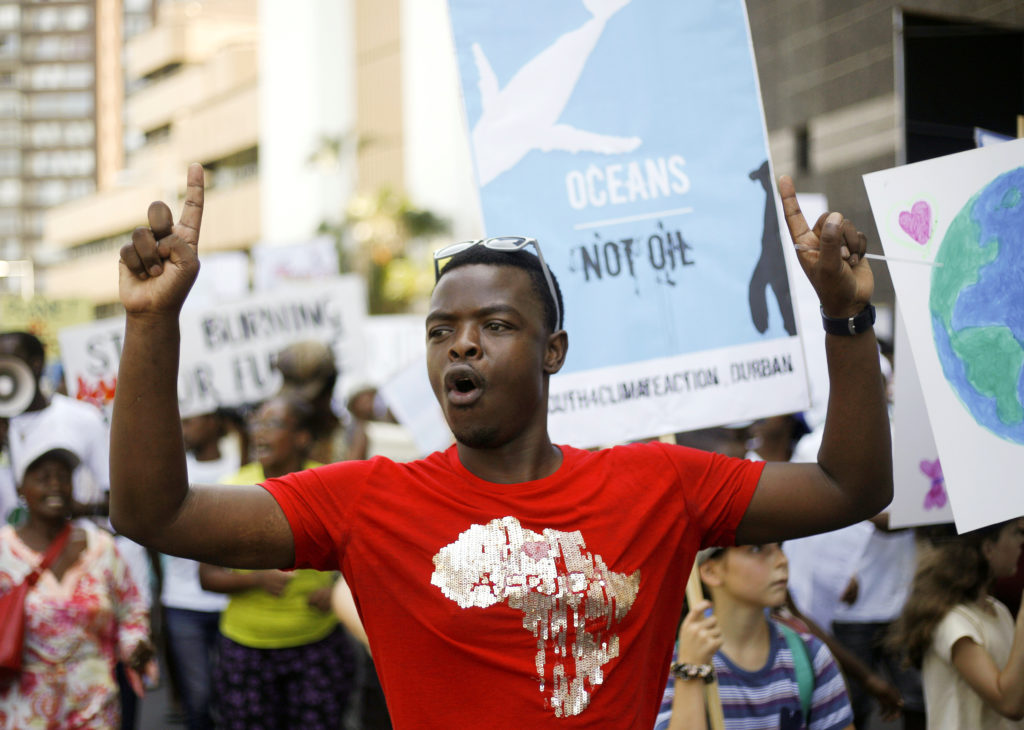 Demonstrators take part in a protest against climate change organized by the YouthStrike4Climate movement in Durban, South Africa. Photo by Rogan Ward/Reuters

About 50 students protested in South Africa’s capital, Pretoria, chanting “There’s No Planet B.” One protester held a sign reading “You’ll Miss The Rains Down in Africa.” Experts say Africa, with its population of more than 1 billion people, is expected to be hardest hit by global warming even though it contributes least to the greenhouse gas emissions that cause it. 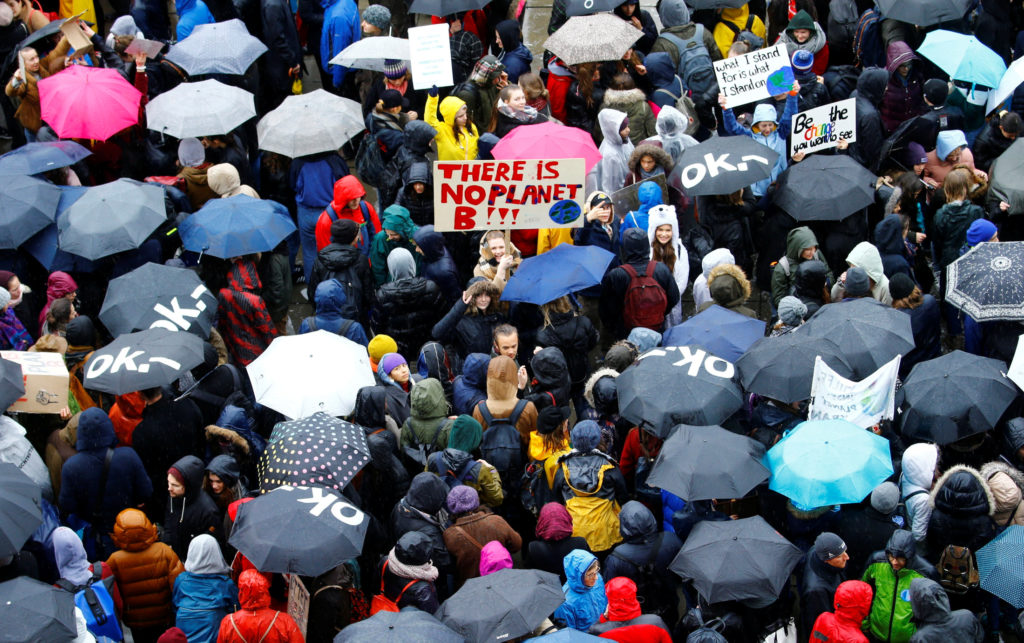 Participants hold banners and placards during a demonstration against climate change in Zurich, Switzerland. Photo by Arnd Wiegmann/Reuters

Police in Vienna said about 10,000 students rallied in the Austrian capital, while in neighboring Switzerland a similar number protested in the western city of Lausanne. Last month, lawmakers in the northern Swiss canton of Basel symbolically declared a “climate emergency.”

In Helsinki, police said about 3,000 students had gathered in front of Finland’s Parliament sporting placards such as: “Dinosaurs thought they had time too!”

A website used to coordinate the rallies listed events in over 2,000 cities.

“A lot happens on social media because you can reach a lot of young people very quickly and show them: look there’s lot of us,” she told The Associated Press. “There’s a very low threshold so we reach a huge number of people.”

“I think that’s how we managed to get so big,” said Reemtsma. 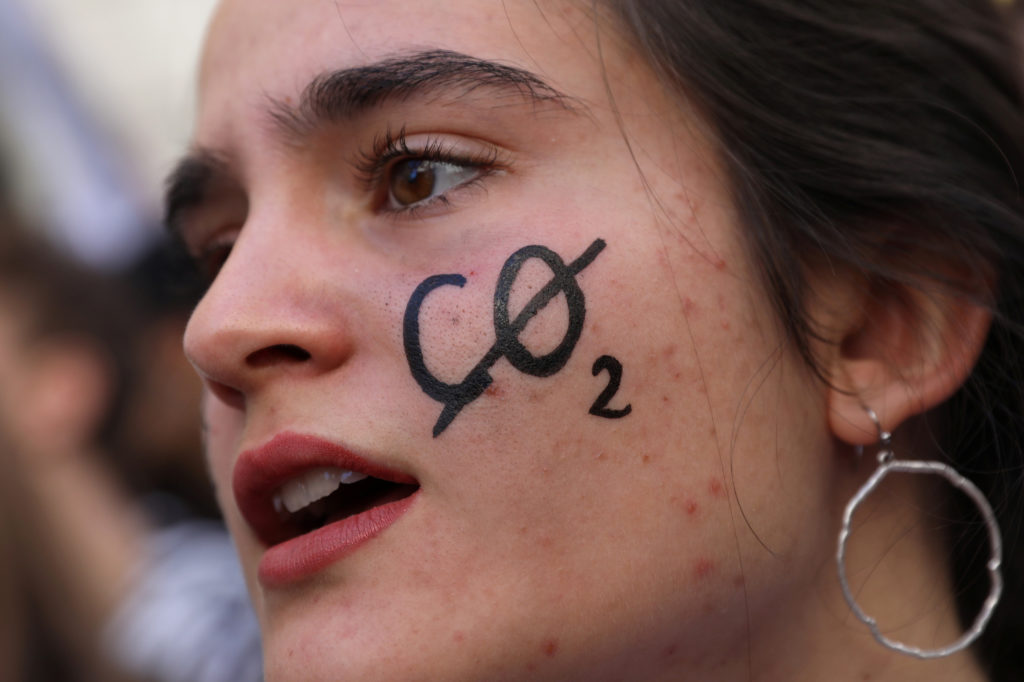 Students demonstrate to demand global action on climate change as part of the “Fridays for Future” movement in Madrid, Spain. Photo by Susana Vera/Reuters

Many protesters in Berlin took aim at politicians such as the leader of Germany’s pro-business Free Democratic Party, Christian Lindner, for suggesting that complicated issues such as climate change were “a matter for professionals” not students.

Others, including Germany’s economy minister, Peter Altmaier, have urged students to stage the protests outside school hours.

By contrast, scientists have backed the protests, with thousands signing petitions in support of the students in Britain, Finland, Germany and the United States.

Volker Quaschning, a professor of engineering at Berlin’s University of Applied Sciences, said it was easy for politicians to belittle students.

“That’s why they need our support,” he said. “If we do nothing then parts of this planet could become uninhabitable by the end of the century.”

Scientists have warned for decades that current levels of greenhouse gas emissions are unsustainable, so far with little effect. In 2015, world leaders agreed in Paris to a goal of keeping the Earth’s global temperature rise by the end of the century well below 2 degrees Celsius (3.6 degrees Fahrenheit).

Yet at present, the world is on track for an increase of 4 degrees Celsius, which experts say would have far-reaching consequences for life on the planet. 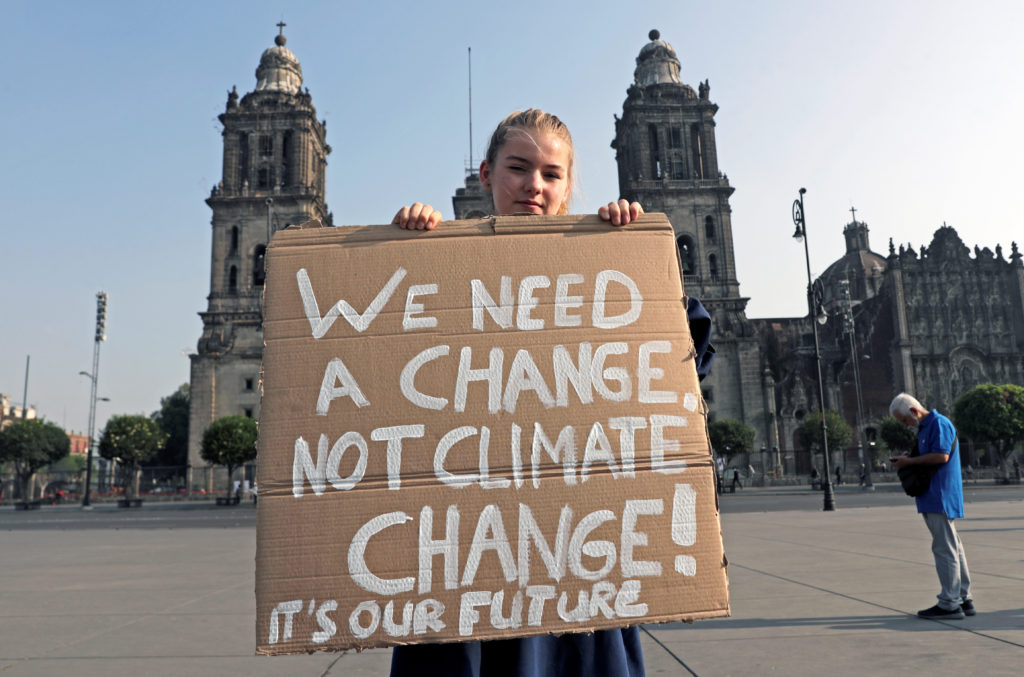 A student holds a poster before she takes part in a march, on background is pictured the Catedral Metropolitana, in Mexico City. Henry Romero/Reuters

In Germany, environmental groups and experts have attacked government plans to continue using coal and natural gas for decades to come.

Quaschning, who was one of more than 23,000 German-speaking scientists to sign a letter of support this week, said Germany should aim to fully “decarbonize” by 2040. This would give less-advanced nations a bit more time to wean themselves off fossil fuels while still meeting the Paris goal globally.

“This is going to require radical measures and there isn’t the slightest sign of that happening yet,” said Quaschning.

A poll published Friday by German public broadcaster ZDF found that 67 percent of respondents backed the students’ protests during school hours, with 32 percent opposed. The representative telephone poll conducted between March 12 and 14 involved 1,290 randomly selected voters. The margin of error was about 3 percentage points. 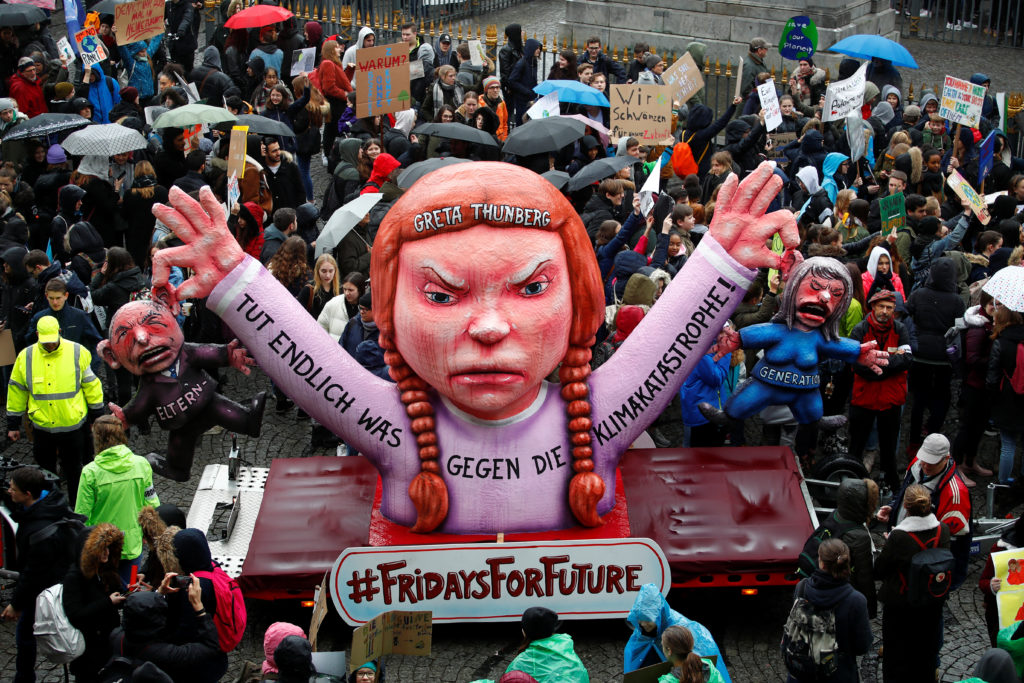 Students use a carnival float depicting Swedish environmental campaigner Greta Thunberg during a strike from school to demand action on climate change at the town hall square of Duesseldorf, Germany. Wolfgang Rattay/Reuters

In Stockholm, Greta Thunberg predicted that students won’t let up their protests.

“There are a crisis in front of us that we have to live with, that we will have to live with for all our lives, our children, our grandchildren and all future generations,” she said. “We won’t accept that, we won’t let that happen and that’s why we go on strike. We are on strike because we do want a future, we will carry on.”