The official death toll from the inferno and massive explosions that devastated a warehouse and container port in the northeastern Chinese city of Tianjin has climbed to 112, with hundreds injured and almost 100 people still unaccounted for in the smoldering wreckage. 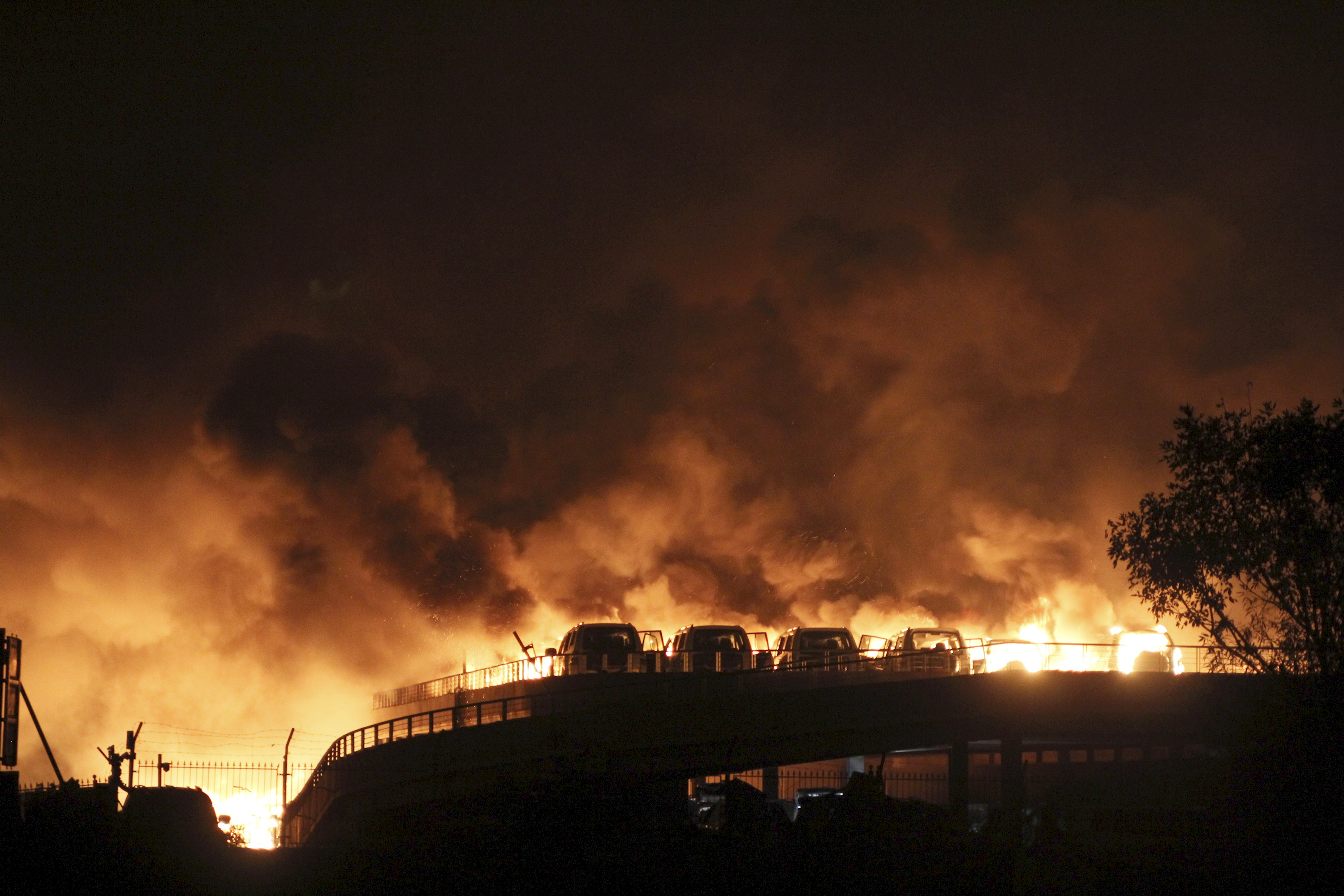 The increased death toll came on the heels of the revelation that the toxic chemical warehouse where the blaze started was only 2,000 feet from a high-rise residential complex despite regulations requiring hazardous materials facilities to be at least 3,200 feet away from such structures. 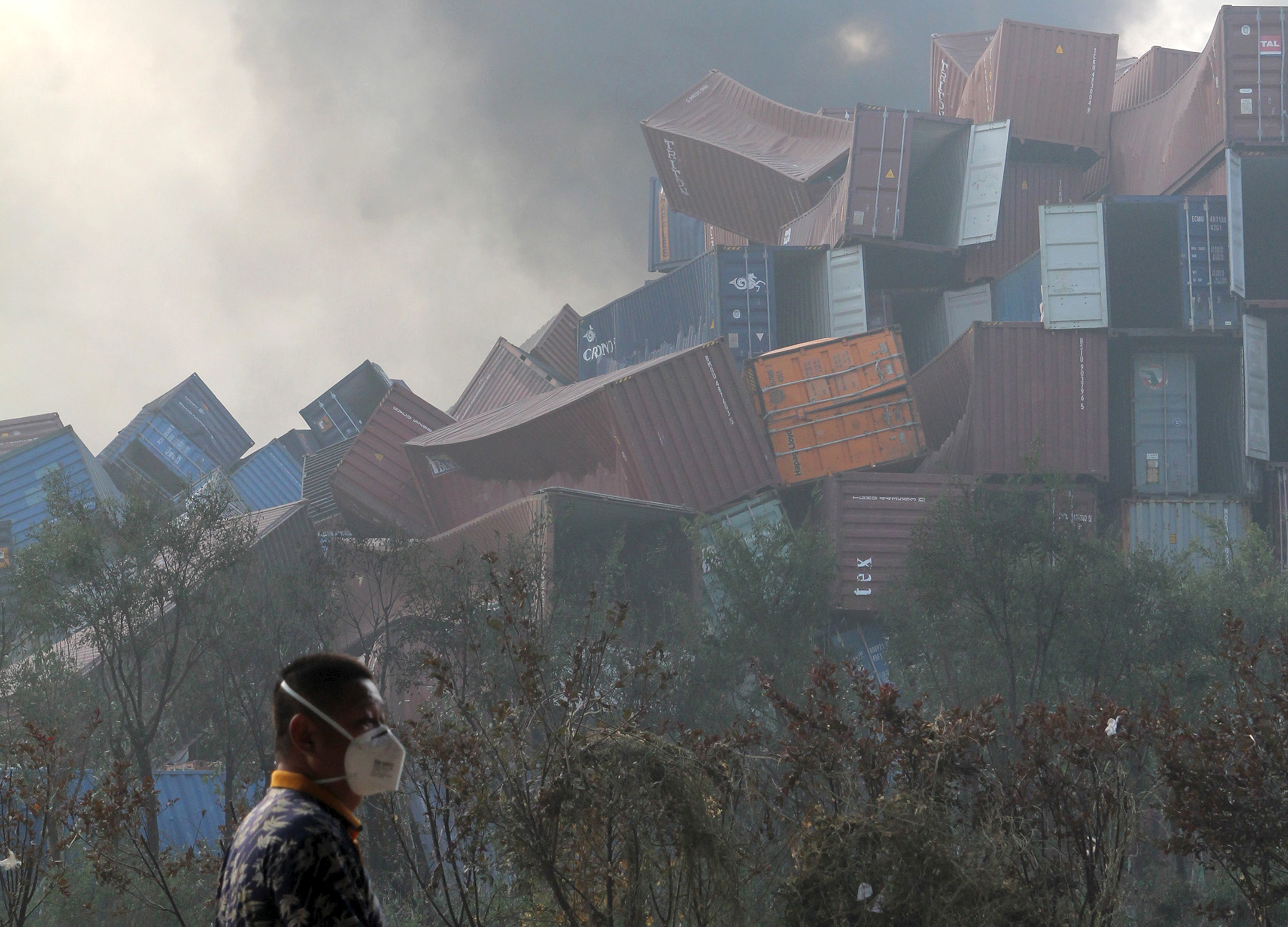 A man wearing a mask walks past overturned shipping containers near the scene of the explosions, August 13, 2015. Photo by Reuters

The disclosures added to accusations of criminal negligence on the part of the warehouse owner and suspicions of a cover-up by Chinese officials, who have sought to suppress information about the disaster and seemed unprepared for questions about the proximity of a hazardous materials storage facility to the nearby Vanke Port City residential development. 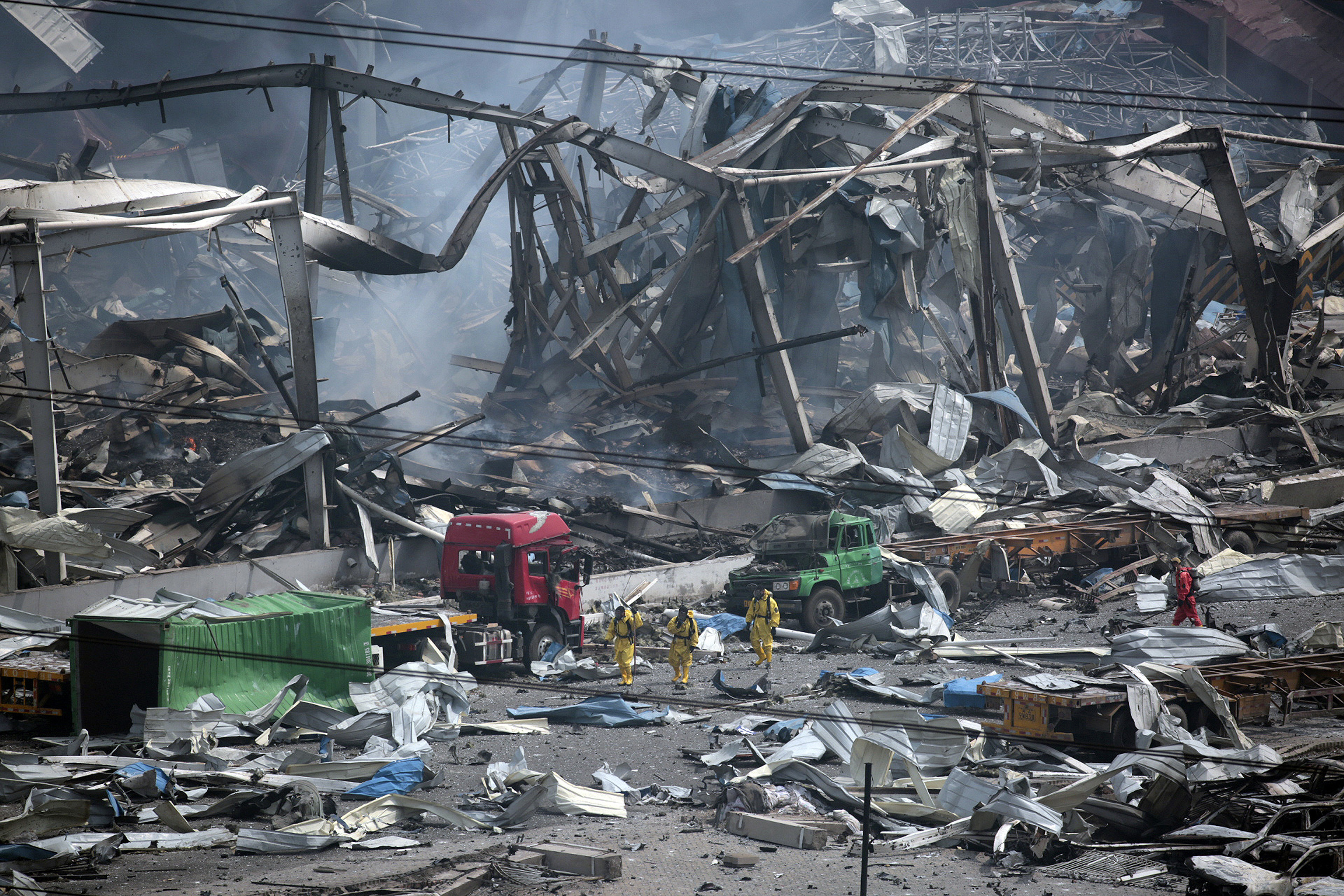 Rescue workers wearing chemical protective suits walk at the site of the explosions, August 14, 2015. Rescuers on Friday pulled one survivor from the wreckage, a city official told reporters at a briefing. Photo by Jason Lee/Reuters

The development, along with everyone within a roughly two-mile radius of the site of the blaze, has been evacuated indefinitely due to concerns about toxic chemicals found near the disaster site, including roughly 700 tons of toxic sodium cyanide.

China’s state-run Xinhua News Agency reported that “Out of consideration for toxic substances spreading, the masses nearby have been asked to evacuate,” according to The Guardian. 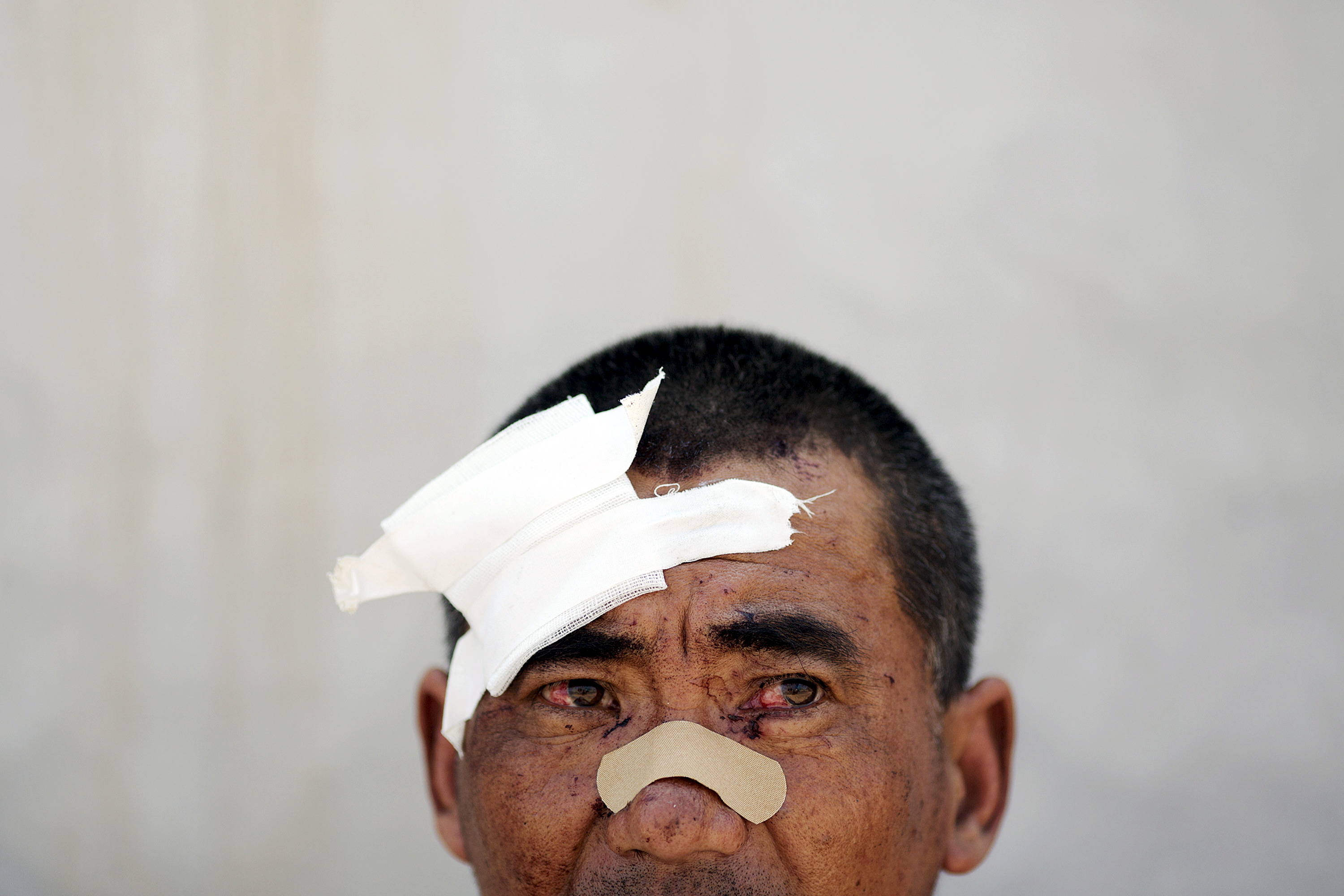 An injured man evacuated from the residential area near the explosion site looks toward pluming smoke, August 13, 2015. Photo by Damir Sagolj/Reuters

The disaster began late Wednesday night when a small blaze at the Rui Hai warehouse quickly ballooned into massive explosions and an inferno that subsumed surrounding areas, injuring firefighters and nearby onlookers. According to Chinese media reports, shockwaves from the blasts — one of which reportedly had the explosive force of 21 tons of TNT — could be felt miles away. 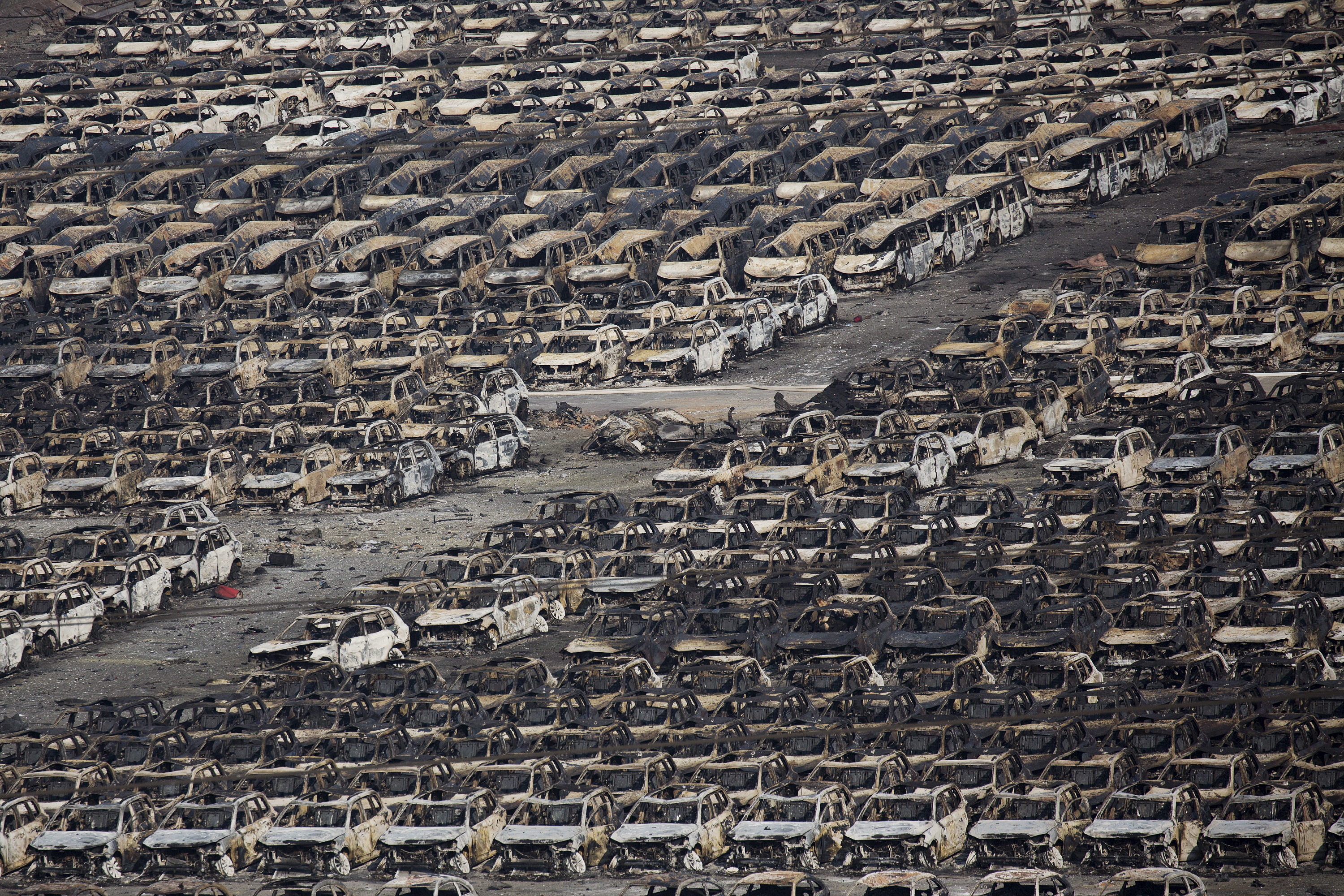 Burnt cars are seen near the site of the explosions, August 13, 2015. Photo by Damir Sagolj/Reuters

The developers of Vanke Port City told The New York Times that they were unaware that the nearby warehouse contained hazardous materials, and that when they started construction on the development in 2010, they were told that the facility handled only “common goods.” 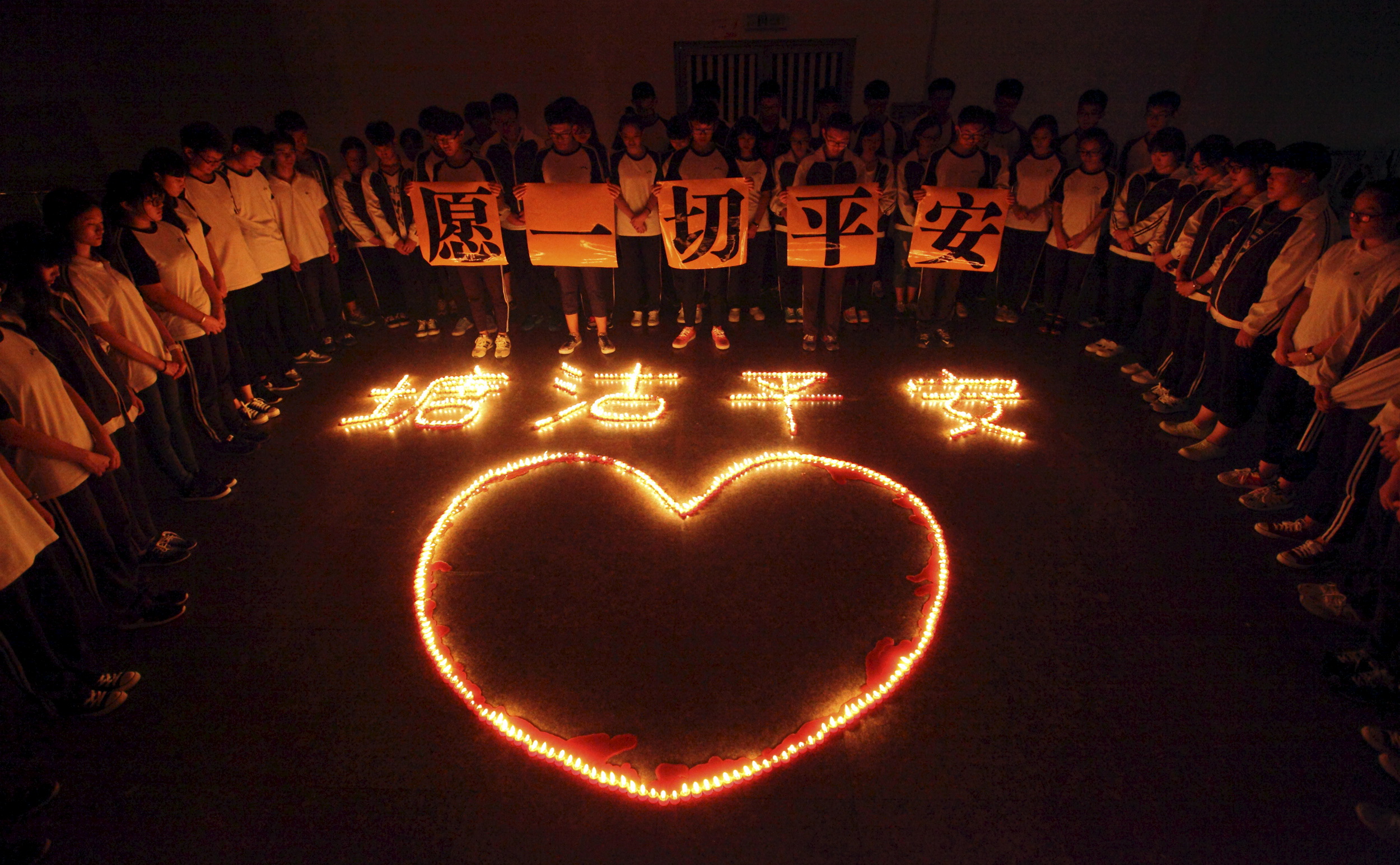 Students and teachers at a school in Zhuji, Zhejiang province, China stand around lighted candles which form Chinese characters saying “Tanggu be safe” during a candlelight vigil for victims of the explosions, August 13, 2015. Tanggu is a name for the affected portion of Tianjin. Photo by Reuters

At least 21 of those killed by the blaze were firefighters, more than 1,000 of whom were dispatched the scene of the accident. 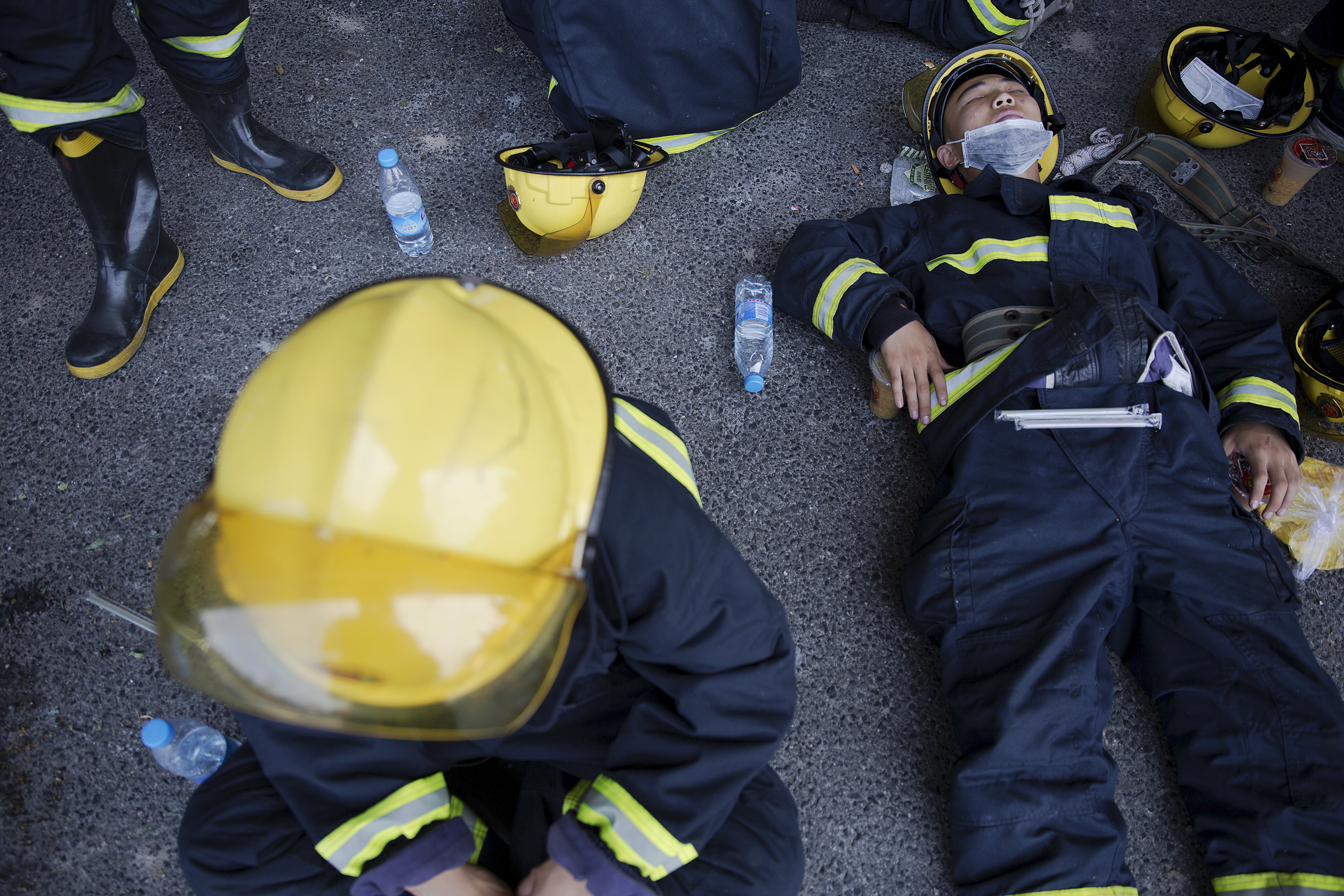 Firefighters take a break after trying to put fire down at the explosion site, August 13, 2015. Many of those killed in the disaster were firefighters. Photo by Damir Sagolj/Reuters