Pope in UAE for historic trip after call for Yemen relief

ABU DHABI, United Arab Emirates — Pope Francis landed Sunday in Abu Dhabi on the first-ever papal trip to the Arabian Peninsula, where he is seeking to turn a page in Christian-Muslim relations while also ministering to a unique, thriving Catholic community.

Francis earlier Sunday called for the urgent observation of a limited cease-fire in Yemen reached in December and for food and medicine to get to its people, who are suffering the world’s worst humanitarian crisis.

He made the appeal at the Vatican before boarding a plane to the United Arab Emirates, which has been Saudi Arabia’s main ally in its war in Yemen — a way to avoid embarrassing his hosts with a public call while in the region. Abu Dhabi’s powerful crown prince, Sheikh Mohammed bin Zayed Al Nahyan, greeted the pontiff with smiles along with Cabinet ministers and an honor guard when he landed around 9:50 p.m. in the Emirati capital.

“The people are exhausted by the long conflict and many children are hungry, but humanitarian aid isn’t accessible,” Francis said in his noontime Sunday blessing. “The cries of these children and their parents rise up” to God.

Francis traveled to Abu Dhabi to participate in a conference on interreligious dialogue sponsored the Emirates-based Muslim Council of Elders, an initiative that seeks to counter religious fanaticism by promoting a moderate brand of Islam. It’s the brainchild of Sheikh Ahmed el-Tayeb, the grand imam of Egypt’s Al-Azhar, the revered 1,000-year-old seat of Sunni Islam that trains clerics and scholars from around the world. 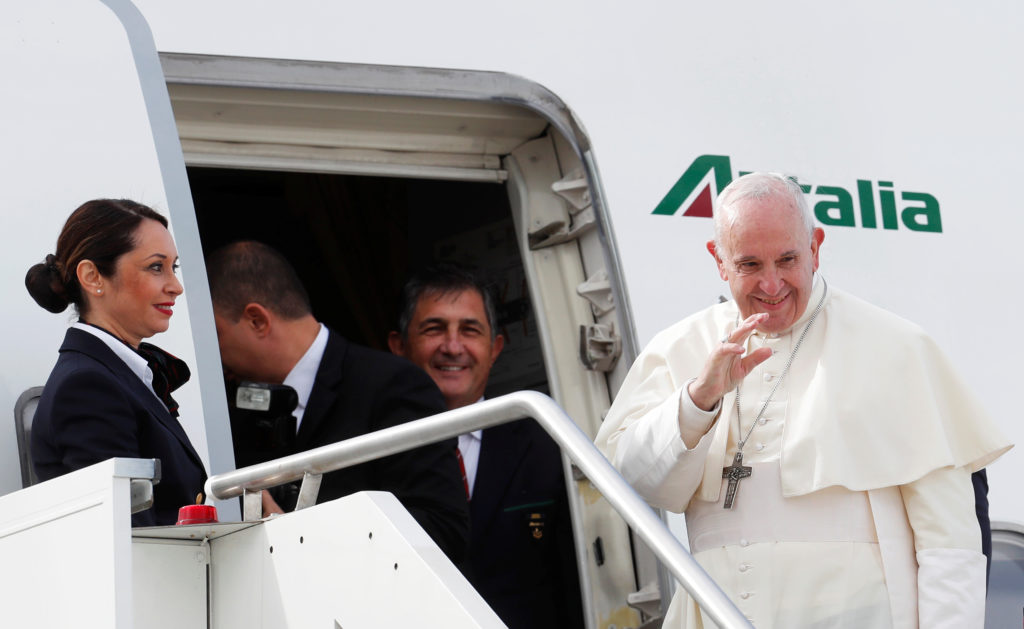 Pope Francis waves as he boards a plane before departure for his visit to United Arabs Emirates, at Leonardo da Vinci-Fiumicino Airport in Rome, Italy, February 3, 2019. Photo By Remo Casilli/Reuters

In a video message to the Emirates on the eve of his trip, Francis paid homage to his “friend and dear brother” el-Tayeb and praised his courage in calling the meeting to assert that “God unites and doesn’t divide.”

“I am pleased with this meeting offered by the Lord to write, on your dear land, a new page in the history of relations among religions and confirm that we are brothers despite our differences,” Francis said.

In a statement Saturday, Al-Azhar described the upcoming meeting as “historic” and praised the “deeply fraternal relationship” between its imam and the pope, which it said even includes birthday greetings. El-Tayeb also met Francis at the airport.

Francis and el-Tayeb are to address the “Human Fraternity Meeting” Monday that has drawn not only Christian and Muslim representatives but hundreds of Jewish, Hindu, Buddhist and other Christian faith leaders. It’s all part of the Emirates’ “Year of Tolerance” and its effort to show its openness to other faiths in a region otherwise known for severe restrictions on religions outside of Islam.

“It’s something new for the Muslim world, that within the discussion of dialogue, they’re talking about interreligious dialogue across the board,” beyond basic Christian-Muslim relations, said Marco Impagliazzo, president of the, a Rome-based Catholic organization active in interfaith relations who will be attending the conference. 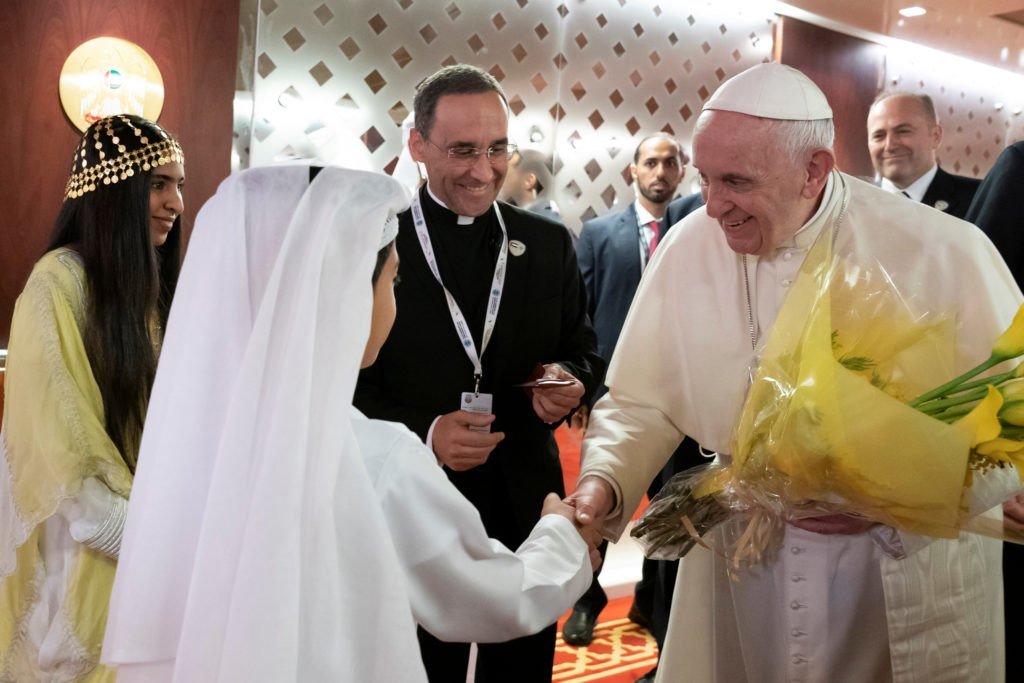 Pope Francis, Head of the Catholic Church is greeted by an Emirati boy upon his arrival at Abu Dhabi International airport in Abu Dhabi, United Arab Emirates, February 3, 2019. Photo By WAM/Handout via Reuters

Francis’ other main initiative in Abu Dhabi is a giant Mass on Tuesday in the city’s main sports arena that is expected to draw some 135,000 people in what some have called the largest show of public Christian worship on the Arabian Peninsula. There, Francis will see firsthand a Catholic community that is big, diverse and dynamic, at a time when the wider Mideast has seen an exodus of Christians fleeing persecution at the hands of the Islamic State group and others.

Of the over 9 million people now living in the UAE, around 1 million are Emirati while the rest are foreigners drawn to the oil-rich federation to work in everything from white-collar finance to construction.

The Catholic Church believes there are some 1 million Catholics in the UAE. Most are Filipino and Indian, many of whom have left behind families for work and can face precarious labor conditions, which human rights groups regularly denounce.

“The church has a unique role because it becomes home,” said Brandon Vaidyanathan, chair of the sociology department at Catholic University in Washington, who grew up in Dubai. “It becomes a place of belonging” in a country where foreigners can live, work and practice their faith but will never gain citizenship.

Vaidyanathan, who converted from Hinduism to Catholicism while living in Dubai, said the Emirates’ religious tolerance is commendable given the trends of the region. He noted the “unprecedented” nature of the government’s invitation to Francis, its donation of lands for churches and even a recent decision to rename a mosque “Mother Mary of Jesus.”

Yet he pointed to the difference between freedom to worship and true religious freedom. Crosses, for example, can only be displayed inside churches, proselytizing for faiths other than Islam is banned and Muslims are forbidden from converting.

Francis will likely focus on issues of religious freedom and fraternity in his public remarks. Unlike all his other foreign trips, he will not deliver a political speech.

Vatican spokesman Alessandro Gisotti said the reason was to give greater emphasis to his speech to the interfaith conference. He dodged a question about whether Francis would raise Yemen’s yearslong war in his private talks with the Emirates’ ruler. The UAE is deeply involved in the Saudi-led war in the Arab world’s poorest country, where tens of thousands have been killed and millions face food and medical shortages.

“I don’t know if the Holy Father will confront it publicly or privately, but certainly on many occasions, even recently, he has underlined the need to search for peace in particular to guarantee the humanitarian rights of the population, especially children,” Gisotti said.

Aid groups working in Yemen hope Francis won’t just rely on his public appeals, but will use his visit to bring his message to the Emirati leadership in person.

CAFOD, the overseas aid group of the Catholic Church in England and Wales, recently joined a coalition of British humanitarian organizations in appealing for Yemen’s limited cease-fire to hold so that humanitarian aid can reach the most vulnerable.

“We have confidence in the greatness of the pope to be our advocate and the advocate for the Yemeni people,” said Giovanna Reda, CAFOD’s head of humanitarian programs for the Middle East.