ABU DHABI, United Arab Emirates — Pope Francis ministered on Tuesday to the thriving Catholic community in the United Arab Emirates as he concluded his historic visit to the Arabian Peninsula with the first-ever papal Mass here and a call for his flock to remain meek in following God.

A day after making a broad appeal for Christian and Muslim leaders to work together to promote peace and reject war, Francis celebrated what some considered the largest show of public Christian worship on the peninsula, the birthplace of Islam.

For the Gulf Arab region where public displays of non-Islamic faith are restricted, the hymns of “Halleluja” booming out from speakers marked a milestone and evidence of the Emirates’ much touted assertions of its tolerance for other faiths.

Cheers erupted inside and outside the Zayed Sports City Stadium as Francis arrived and looped through the crowd in his open-sided popemobile, as chants of “Viva il Papa” and “We love you!” echoed from the crowd. Vatican spokesman Alessandro Gisotti later said some 180,000 people attended the Mass, including 135,000 tickets given out for stadium seats and the throngs who crowded around it to catch a glimpse of the pope. 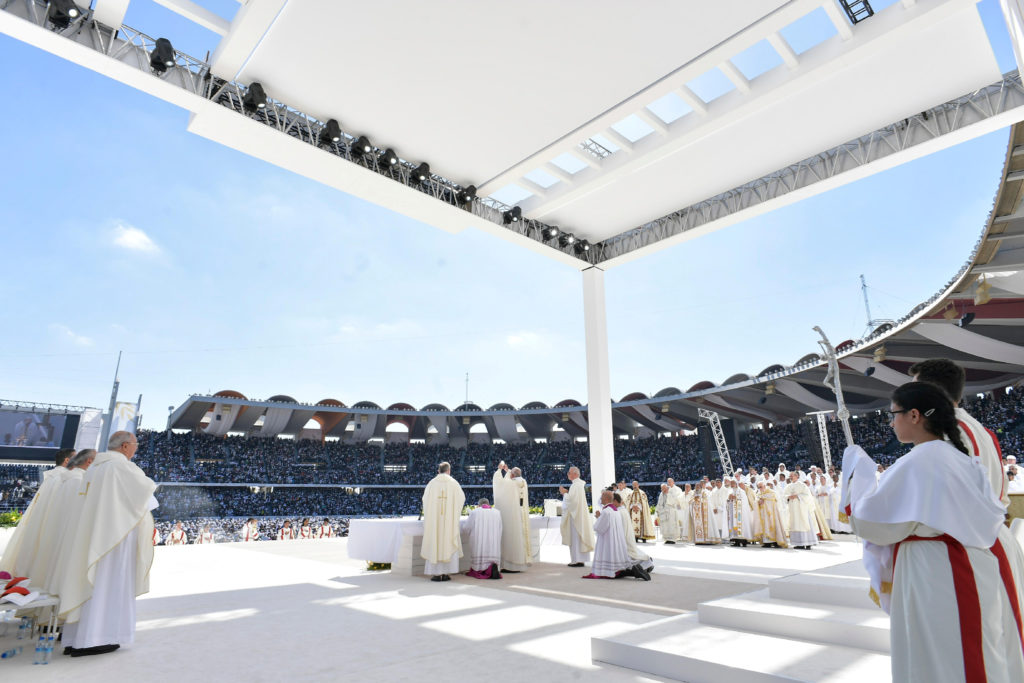 Organizers said faithful from 100 countries would attend, as well as 4,000 Muslims from this Muslim federation — evidence of the enormous diversity among the 9 million people who live in the UAE.

“We have to say it is really a big event for us which we never expected,” said Sumitha Pinto, and Indian native who has lived in the UAE for nearly 20 years. She attended the Mass with her husband and four sons, the youngest of whom held up sign with the pope’s photo that read: “Welcome Pope Francis. Make Me a Channel of Your Peace.”

The Emirates’ Catholic community is something an anomaly for the region — large, diverse and thriving at a time when the wider Mideast has seen an exodus of Christians fleeing persecution at the hands of the Islamic State group and others.

The Catholic Church estimates as many as 1 million of the over 9 million living in the UAE are Catholic, nearly all of them foreigners drawn to the oil-rich federation to work in everything from white-collar finance to construction. Most are Filipino and Indian, many of whom have left behind families back home in order to come here and work. They can face precarious labor conditions, which human rights groups regularly denounce.

In his homily, delivered in Italian and translated into Arabic with English subtitles on giant screens, Francis made a direct reference to the sufferings many endure.

“It is most certainly not easy for you to live far from home, missing the affection of your loved ones, and perhaps also feeling uncertainty about the future,” he said. “But the Lord is faithful and does not abandon his people.”

“We will either build the future together or there will not be a future.”
– Pope Francis

Francis also told his flock — many of them poor, manual laborers — that they need not build great “superhuman” works to be faithful. It was a message extolling meekness in a country that is home to the world’s biggest skyscraper and is known for its opulence and excess.

Jesus, Francis said, “did not ask us to build great works or draw attention to ourselves with extraordinary gestures. He asked us to produce just one work of art, possible for everyone: our own life.”

The crowd was elated and appreciated Francis’ words.

“He is almost divine. He has a special charisma, which appeals to each one,” said Raphael Muntenkurian, 64, an Indian-native and former seminarian who has lived in the UAE for more than 30 years.

“Everybody is actually mesmerized by his appeal for peace and tolerance,” he said. “His simplicity and humility is always praise worthy.”

In an indication of the diversity of the Catholic flock, the prayers during Mass were being read out in a variety of languages and addressed the variety of hardships many face.

A prayer in the Indian language of Konkani called for public officials to be “illuminated” and promote the dignity of all, while the one in the Filipino language of Tagalog urged prayers for migrants and workers in in the UAE so that “their sacrifice and work may blossom and sustain their families.” The one in French called for those who foment violence to change their ways and “stop wars, overcome hatred and help us forge links of justice and peace.” 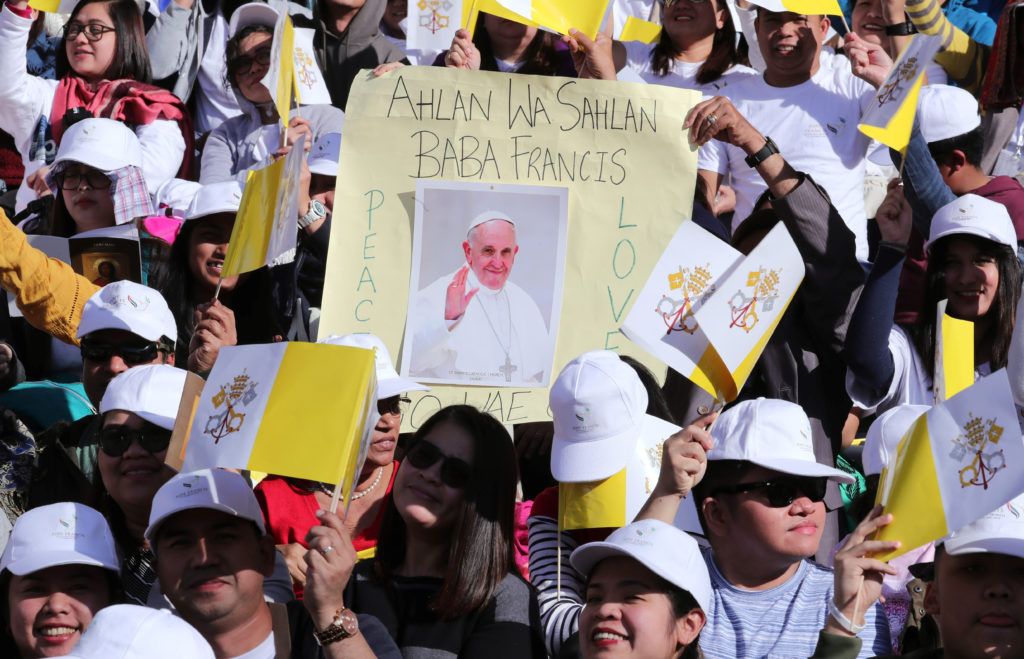 The Mass concluded around noon and the pope departed about an hour later on a chartered Etihad flight to return to Vatican City.

On Monday, the pope met with Emirati leaders and signed a document promoting “human fraternity” with Sheikh Ahmed el-Tayeb, the grand imam of Egypt’s Al-Azhar, the revered 1,000-year-old seat of Sunni Muslim learning. He also urged religious leaders to work together to reject the “miserable crudeness” of war and resist the “logic of armed power … the arming of borders, the raising of walls.”

“There is no alternative: we will either build the future together or there will not be a future,” Francis told Abu Dhabi’s powerful crown prince and hundreds of imams, muftis, ministers, rabbis and swamis gathered in the Emirati capital at a time when the UAE-backed Saudi war in Yemen has driven the Arab world’s poorest country to the brink of famine.

“God is with those who seek peace,” Francis added.

Francis’ visit, 800 years after his peace-loving namesake St. Francis of Assisi visited an Egyptian sultan, marked the culmination of years of Holy See efforts to improve relations with the Muslim world after they hit a low during the papacy of Pope Benedict XVI. Since then, religious fanaticism and faith-inspired wars have only grown around the globe, inspiring the pontiff’s efforts to promote tolerance and understanding.

Left: Pope Francis is greeted by a boy as he arrives to hold a mass at Zayed Sports City Stadium in Abu Dhabi, United Arab Emirates, February 5, 2019. Photo by Ahmed Jadallah/Reuters