Pope Francis ended an emotional and symbolic trip to the Greek island of Lesbos on Saturday by taking three refugee families back with him to the Vatican in Rome.

He said the decision to bring the 12 Syrian refugees to Italy was a humanitarian gesture, not a political act.

The families, whose houses had been bombed, had arrived in Greece before an agreement made in March to to deport asylum-seekers who reach European shores. The 12 refugees will be cared for the by the Holy See.

The pope’s visit to the island was a plea for morality and sympathy, a “gesture of welcome,” according to a statement released by the Vatican.

The six adults and six children chosen through negotiations between Greek and Italian authorities are among hundreds of thousands of migrants seeking refuge in Europe.

“Migrants, rather than simply being a statistic, are first of all persons who have faces, names and individual stories,” he said in a speech during a ceremony at the port of Lesbos. “Europe is the homeland of human rights.” 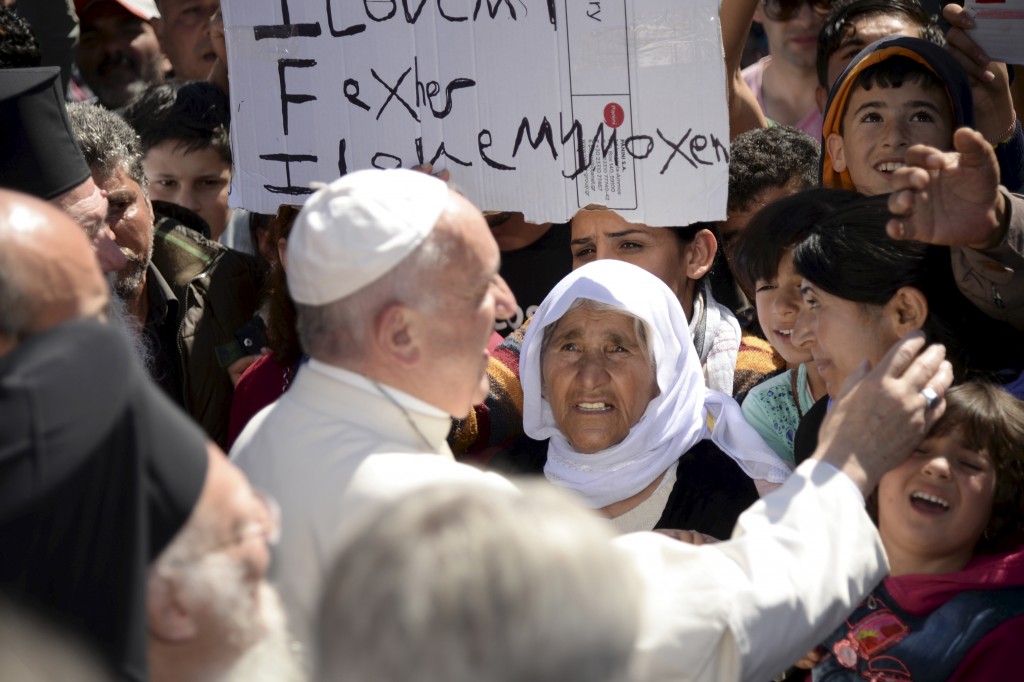 Pope Francis greets migrants and refugees at Moria refugee camp near the port of Mytilene, on the Greek island of Lesbos, April 16, 2016. Photo by Filippo Monteforte/Reuters

Many people wept at his feet at the Moria refugee detention center where he and two Orthodox leaders greeted more than 200 individually while some in the crowd chanted “Freedom! Freedom!” according to the Associated Press.

“The world will be judged by the way it has treated you. And we will all be accountable for the way we respond to the crisis and conflict in the regions that you come from,” the pope said.

Francis is the son of Italian immigrants and was born in Argentina.

The Vatican said the pope also met with the Prime Minister Alexis Tsipras of Greece during his visit to talk about the migration crisis and the need to protect people who risk their lives crossing the Aegean and Mediterranean Seas.

“The Pope has appreciated the humane stance of the Greek people, who despite harsh economic strains have shown solidarity and commitment to universal values,” the statement said.

Left: A group of Syrian refugees wait to board a plane with Pope Francis at the airport of Mytilene, in the Greek island of Lesbos, April 16, 2016. Photo by Filippo Monteforte/Reuters