KAUNAS, Lithuania — Pope Francis warned Sunday against any rebirth of the “pernicious” anti-Semitic attitudes that fueled the Holocaust as he marked the annual remembrance for Lithuania’s centuries-old Jewish community that was nearly wiped out during World War II.

Francis began his second day in the Baltics in Lithuania’s second city, Kaunas, where an estimated 3,000 Jews survived out of a community of 37,000 during the 1941-1944 Nazi occupation.

During Mass in Santakos Park under a brilliant autumn sun, Francis honored both Jewish victims of the Nazis and the Lithuanians who were deported to Siberian gulags or were tortured, killed and oppressed at home during five decades of Soviet occupation. 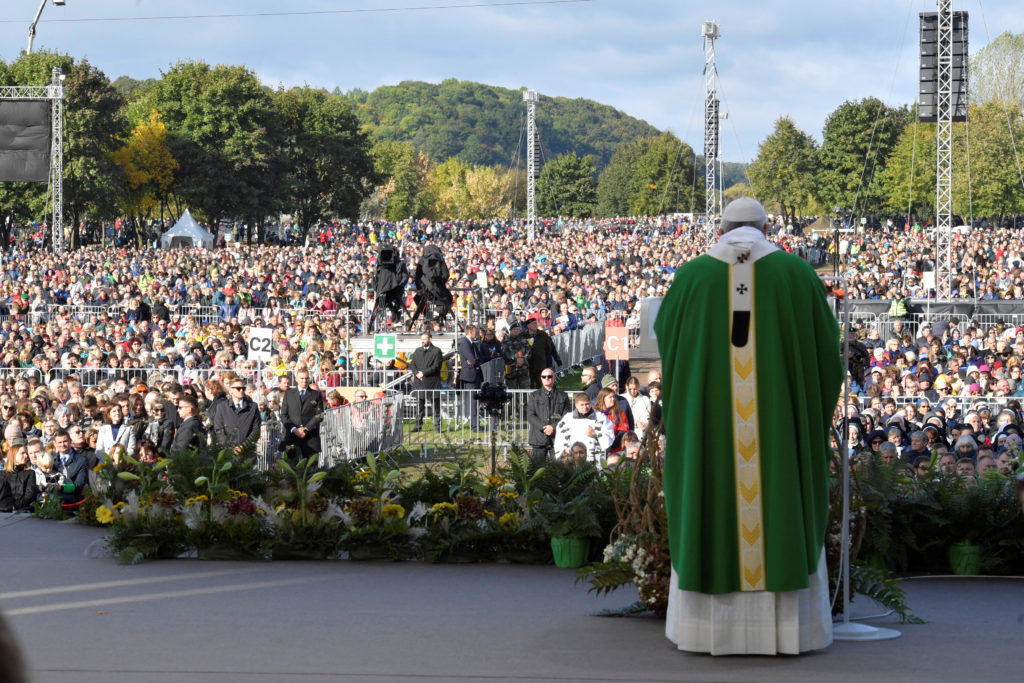 “Earlier generations still bear the scars of the period of the occupation, anguish at those who were deported, uncertainty about those who never returned, shame for those who were informers and traitors,” Francis told the crowd, which was estimated by the local church to number 100,000. “Kaunas knows about this. Lithuania as a whole can testify to it, still shuddering at the mention of Siberia, or the ghettos of Vilnius and Kaunas, among others.”

He denounced those who get caught up in debating who was more virtuous in the past and fail to address the tasks of the present — an apparent reference to historic revisionism that is afflicting parts of Eastern Europe as it comes to terms with wartime-era crimes.

Francis recalled that Sunday marked the 75th anniversary of the final destruction of the Ghetto in the capital Vilnius, which had been known for centuries as the “Jerusalem of the North” for its importance to Jewish thought and politics. Each year, the Sept. 23 anniversary is commemorated with readings of the names of Jews who were killed by Nazis or Lithuanian partisans or were deported to concentration camps.

The pope warned against the temptation “that can dwell in every human heart” to want to be superior or dominant to others. And he prayed for the gift of discernment “to detect in time any new seeds of that pernicious attitude, any whiff of it that can taint the heart of generations that did not experience those times and can sometimes be taken in by such siren songs.”

Across Europe, far-right, xenophobic and neo-fascist political movements are making gains, including in Lithuania.

Francis noted that he would pray later in the day at a plaque in the Ghetto itself and called for “dialogue and the shared commitment for justice and peace.”

Francis will also visit the former KGB headquarters in Vilnius that is now a museum dedicated to Soviet atrocities, and will hear from Archbishop Sigitas Tamkevicius, who was persecuted by the Soviet regime and was detained in the facility’s chambers.

Francis is travelling to Lithuania, Latvia and Estonia to mark their 100th anniversaries of independence and to encourage the faith in the Baltics, which saw five decades of Soviet-imposed religious repression and state-sponsored atheism. Lithuania is 80 percent Catholic; Lutherans and Russian Orthodox count more followers in Latvia and Estonia, where Francis visits on Monday and Tuesday. 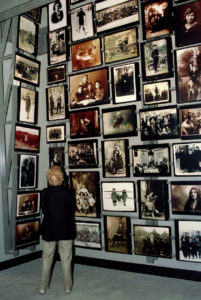 A visitor to the Holocaust Memorial Museum looks at photographs of families in Ejszyszki, Lithuania, where 95 percent of the town’s 3,500 Jews were killed by Nazi squads. Photo by Reuters

Francis’ trip changed its schedule three weeks ago to allow him to acknowledge the slaughter of some 90 percent of Lithuania’s 250,000 Jews at the hands of Nazi occupiers and complicit Lithuanians.

The issue of Lithuanian complicity in Nazi war crimes is sensitive here. Jewish activists accuse some Lithuanians of engaging in historical revisionism by trying to equate the extermination of Jews with the deportations and executions of other Lithuanians during the Soviet occupation.

Many Lithuanians don’t make any distinctions between the Soviets who tortured and killed thousands of Lithuanians and the Nazis who did same with Jews.

Until recently, the Vilnius museum was actually called the “Genocide Museum” but changed its name to the “Museum of Occupations and Freedom Fights” since it focuses on Soviet atrocities, not Nazi German ones.