The poll of 13,000 voters showed Servant of the People getting 43.9% of the vote for party-list candidates, far ahead of rivals. But 199 of the 424 seats being filled were for single constituencies, which the poll didn’t assess.

Overall, five parties cleared the 5% threshold necessary to get party-list seats, according to the poll. In all, the parties got less than 80% of the overall vote, suggesting that Zelenskiy’s party was likely to win a majority of the party-list seats.

Zelenskiy, who took office in May, called the election three months ahead of schedule because the parliament was dominated by his opponents. He is seeking a majority that would support his promised fight against Ukraine’s endemic corruption and for other reforms.

His Servant of the People party is named after the television comedy in which he played a teacher who unexpectedly becomes president.

After voting, Zelenskiy said one of the new parliament’s first tasks should be to consider lifting parliament members’ immunity from prosecution.

A party led by one of Russian President Vladimir Putin’s closest associates, tycoon Viktor Medvedchuk, was in second with 11.5% of the vote, according to the exit poll. It was followed by the European Solidarity party of former President Petro Poroshenko, whom Zelenskiy defeated in a landslide in the country’s spring presidential election.

Zelenskiy’s party intends to continue a pro-Western course toward joining the European Union and NATO, combining this with economic reforms and an intensified fight against endemic corruption.

“With Zelenskiy, a new political team should come into politics that will continue the reforms that Poroshenko spoke about beautifully but did not do,” said 35-year-old lawyer Viktor Shumeiko at a polling station in Kiev.

Medvedchuk says Ukraine’s proper course is to improve its relations with Moscow, which plummeted after Russia’s 2014 annexation of Crimea and its support for Russia-backed separatists fighting government troops in a war that has killed more than 13,000 people.

“The Kremlin will stop the war if Medvedchuk comes into power,” he said. “Half the country speaks Russian, but neither the old or new authorities listen to us. Why should we have the EU and NATO if the war doesn’t stop and we become poorer?” 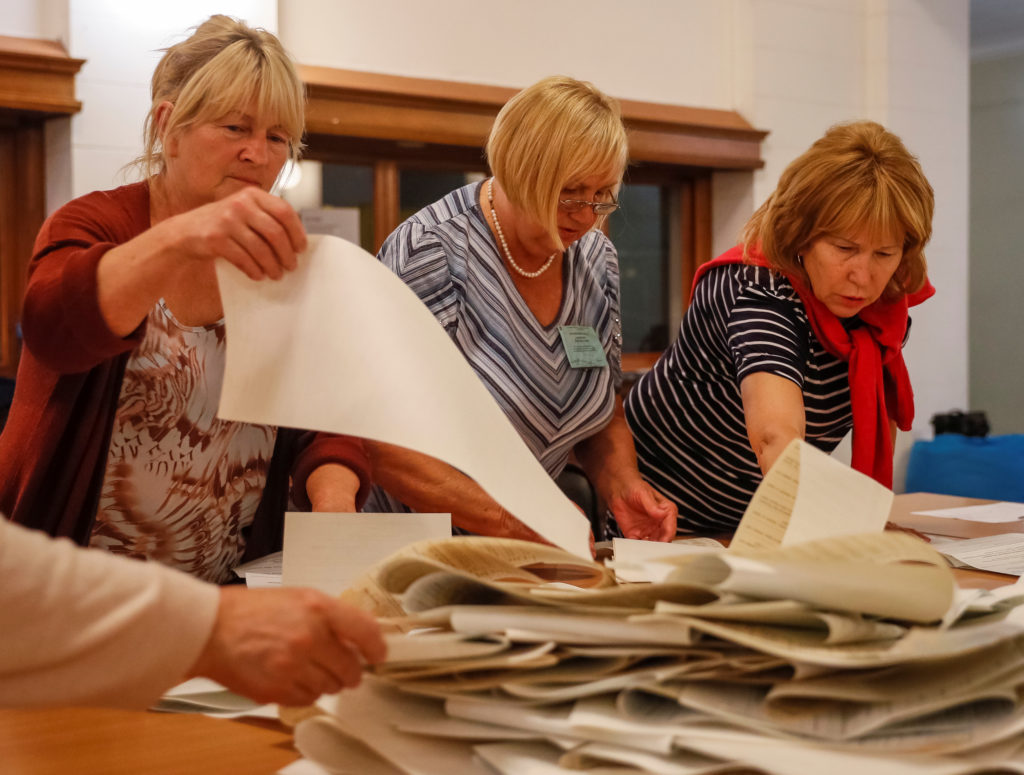 Members of a local electoral commission count ballots at a polling station after a parliamentary election in Kiev, Ukraine July 21, 2019. Photo by Gleb Garanich/Reuters

Medvedchuk proposes that Ukraine grant autonomy to rebel areas in the east and offer amnesty to the separatists. He said Ukraine could get a 25% discount on natural gas imports from Russia if it takes steps that satisfy the Kremlin.

Since Putin is the godfather of Medvedchuk’s daughter, his statements likely reflect Kremlin thinking. Medvedchuk and the Russian leader met Thursday in St. Petersburg.

Dmytro Razumkov, head of Zelenskiy’s party, said it is ready to negotiate with Russia on mechanisms for conflict resolution and seeks peace in the east “but not at any cost.”

The exit poll, conducted by the Kiev International Institute of Sociology and the Razumkov Center think-tank, had a margin of error of 2.5%.