SANT JULIA DE RAMIS, Spain (AP) — Activists blocked railway lines, students skipped classes and supporters of Catalonia seceding from Spain marched in large numbers Monday to mark the anniversary of a referendum that was part of a thwarted bid for independence last year.

The evening march in Barcelona, the northeastern Spanish region’s capital, drew tens of thousands of people and capped a day of noisy and largely nonviolent demonstrations.

The anniversary of the event that sparked Spain’s gravest political crisis in decades was marked by a fractured Catalan independence movement amid delicate talks on the region’s future.

The anniversary of the event that sparked Spain’s gravest political crisis in decades was marked by a fractured Catalan independence movement amid delicate talks on the region’s future with the country’s the center-left Socialist government.

Last year’s Oct. 1 referendum in Catalonia, ruled illegal by a court, was stopped by Spanish police and failed in its bid to produce a separate Catalan state. For many Catalans, the vote has become a symbol of their long fight for self-determination.

As part of the one-year observances across the region, activists blocked roads and other major transportation routes while college and high school students boycotted classes and made emotional speeches at mass protests.

Thousands of students walked behind a street-wide banner that read, “Not forgetting, not forgiving.”

They shouted “Freedom for political prisoners,” a reference to the separatist leaders who have been in pre-trial custody on rebellion and other charges for nearly a year.

Maria Vila, a protester who was placing “Republic under construction” stickers in one of Barcelona’s main thoroughfare, said she wanted to highlight last year’s violence and demand more progress on secession.

“The Catalan government has not done much and we are determined to make the Catalan Republic happen, in any way we can, even if it is by holding another referendum, a legal one,” she told The Associated Press.

Members of the regional Catalan government returned to Sant Julia de Ramis, the northern town that has become a symbolic place for separatists because one year ago police stormed into the local school to prevent people from voting.

Carles Puigdemont, Catalonia’s president at the time, had been scheduled to vote there but had to find an alternative polling station when anti-riot police broke the gates of the school to confiscate ballot boxes and used batons to disperse and injure voters refusing to leave. 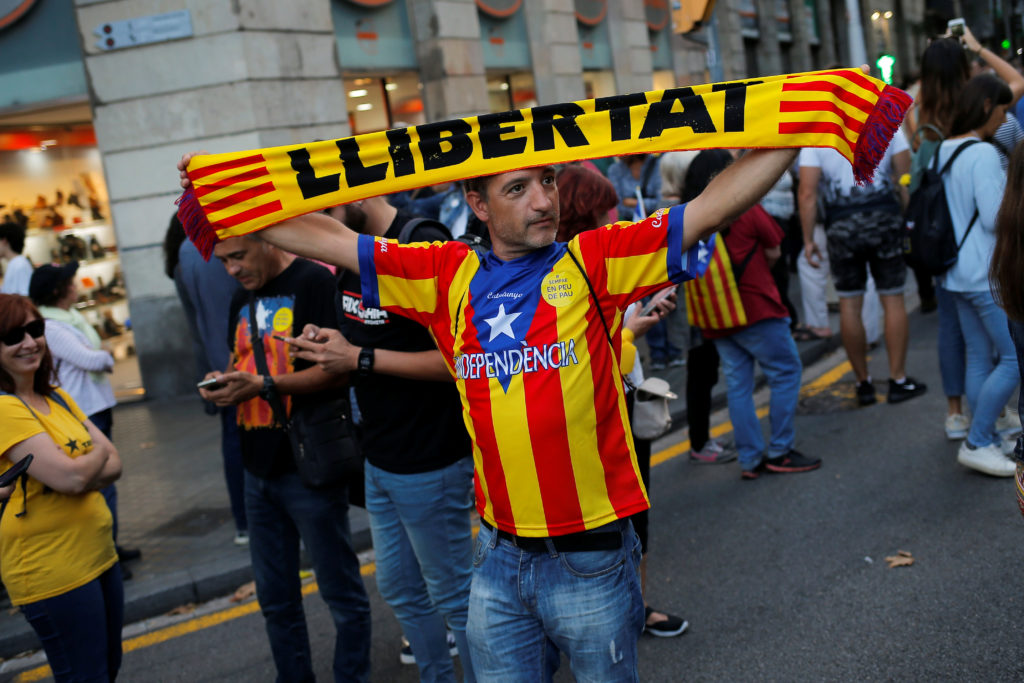 A demonstrator holds up a banner reading “Freedom” during a demonstration on the first anniversary of Catalonia’s October 1, 2017 banned referendum on independence in Barcelona, Spain, October 1, 2018. REUTERS/Jon Nazca

The incidents were broadcast live and brought pressure on the Spanish central government, at the time in the hands of conservatives. Separatists claimed a victory for independence in the vote despite its illegal nature, the police violence and a lack of oversight.

In a brief speech Monday, Catalonia’s current president, Quim Torra, called on supporters gathered outside of the Sant Julia de Ramis school to remember the lessons of the referendum and to press ahead with efforts to secede from Spain.

Torra was hand-picked by Puigdemont from Belgium, where the separatist leader successfully fought off extradition and has been advocating for an independent Catalonia. On Monday, he released a video on Twitter calling on Catalans to remain united in persevering with the goal of breaking away from Spain.

“Let us not stray from the only possible way to live in a full democracy: the (Catalan) Republic and its international recognition,” Puigdemont said.

Torra has asked the government of Prime Minister Pedro Sanchez to authorize a binding vote on secession, and also to release the nine separatist leaders who are in pre-trial detention on rebellion and other charges.

Dialogue between the regional and national administrations has so far delivered some economic deals for funding the region. But the talks are bogged down by internal discord among separatists on the best strategy for going forward and the weak parliamentary support for Sanchez’s minority government.

Polls and recent elections show that the region’s 7.5 million residents are roughly equally divided by the secession question.