Producer’s Notebook: A look at life inside the violent gangs of El Salvador

Before I left for El Salvador I went to my bank to get cash for the trip. The friendly bank teller asked me where I was headed. It turned out that she was born in El Salvador and still had family there.

“Why are you going there?” she said, sounding alarmed.

I had been expecting her to give me restaurant or hotel suggestions, but I went on to explain that I was going to report on why so many Salvadorans had fled the country last summer and are now seeking asylum in the United States.

“It’s dangerous and you should be very careful,” she said earnestly.

I thanked her, took my money and left. I heard a lot of comments like that before arriving in San Salvador, the country’s capital. 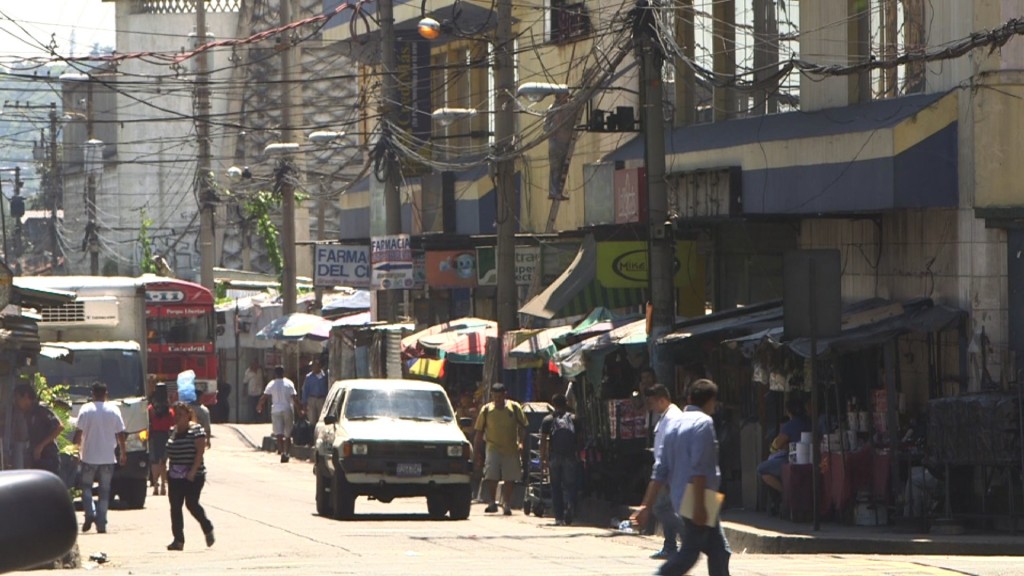 As a news producer, I’ve reported quite a bit from Latin America, but nothing really prepared me for the country of El Salvador.

We were reporting on the role of ultra-violent gangs terrorizing the country’s citizens, so on our first day we met with our fixer, a local who is well-connected and can help line up interviews. In his zeal to deliver on his promise, he brought two gang members and a coyote (an individual paid to help migrants illegally cross international borders) to our hotel for breakfast.

Roberto Hugo Preza, arguably the most prominent Salvadoran journalist, met us there as well. Seeing the crowd that had just walked into the Sheraton to meet us, Hugo pulled us aside.

“There are eyes everywhere … even here,” he said. Hugo warned that we didn’t want to be seen with gang members in public because rival gang members may decide to target us.

Such was our time in El Salvador, a country where walking from one side of the street to the other could be precarious because one side might be under the thumb of the 18th street gang, while the other controlled by Mara Salvatrutcha 13, or MS 13. 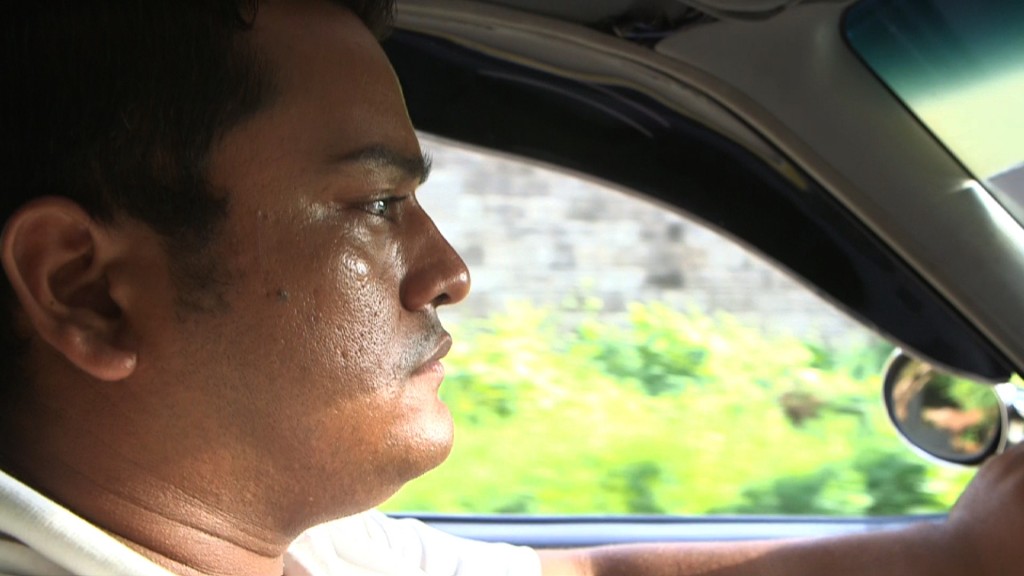 Miguel, who says he’s now being threatened by gang members, wouldn’t meet us at his home because he’s in hiding. We met him at a taxi stand in the center of town and then followed him to a relative’s home.

The next day, we drove to Chalchuapa to meet “Santiago” a high level member of the 18th Street gang. Our fixer told us to wait in our car by the side of the road next to some Mayan ruins, one of the few tourist destination in El Salvador. 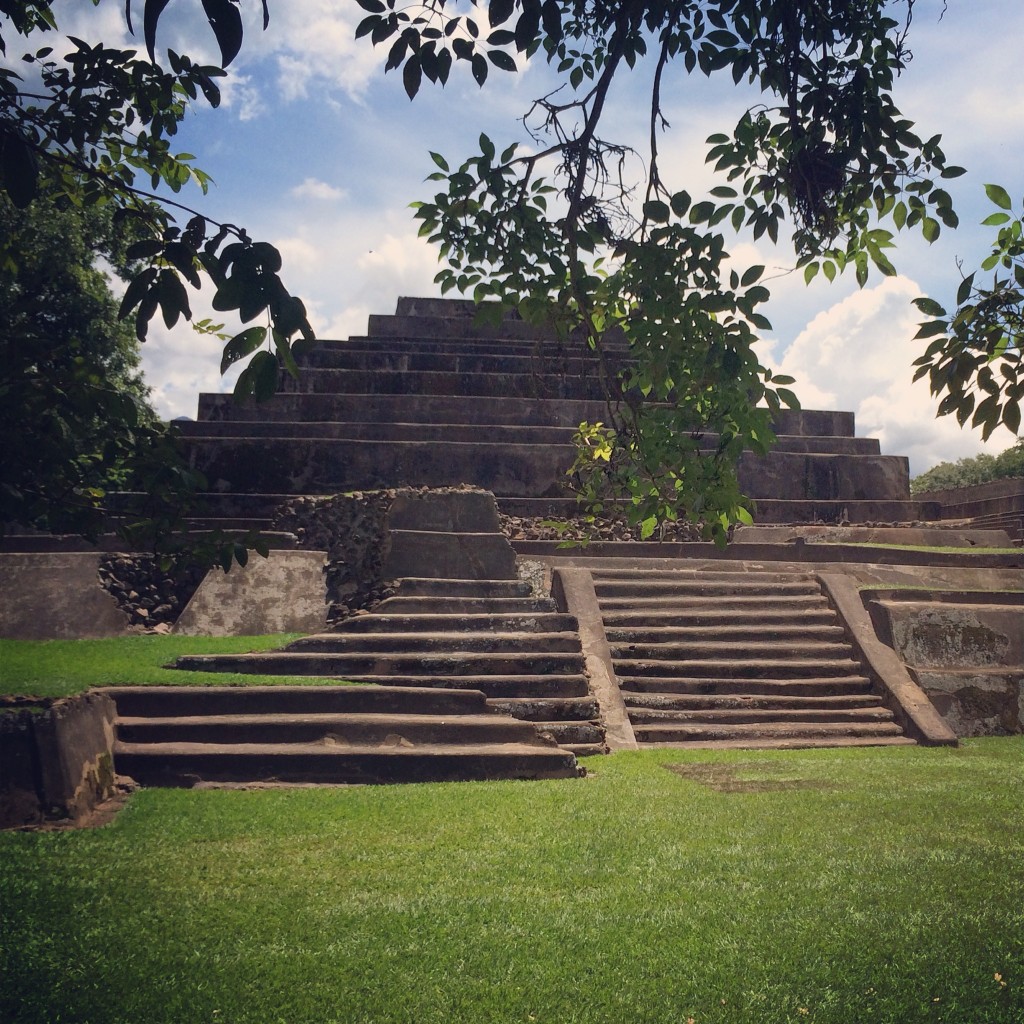 At these Mayan ruins, we met a prolific member of the 18th street gang. Credit: Brian Epstein/NewsHour

The street we stopped at was lined with souvenir stands, but there wasn’t a tourist in sight. After about 20 minutes, a low-riding, red Honda Civic with tinted windows rolled up. Our fixer told us to follow the car to a dilapidated home. Tinfoil covered the windows and small plastic bags used for drugs were scattered on the floor. 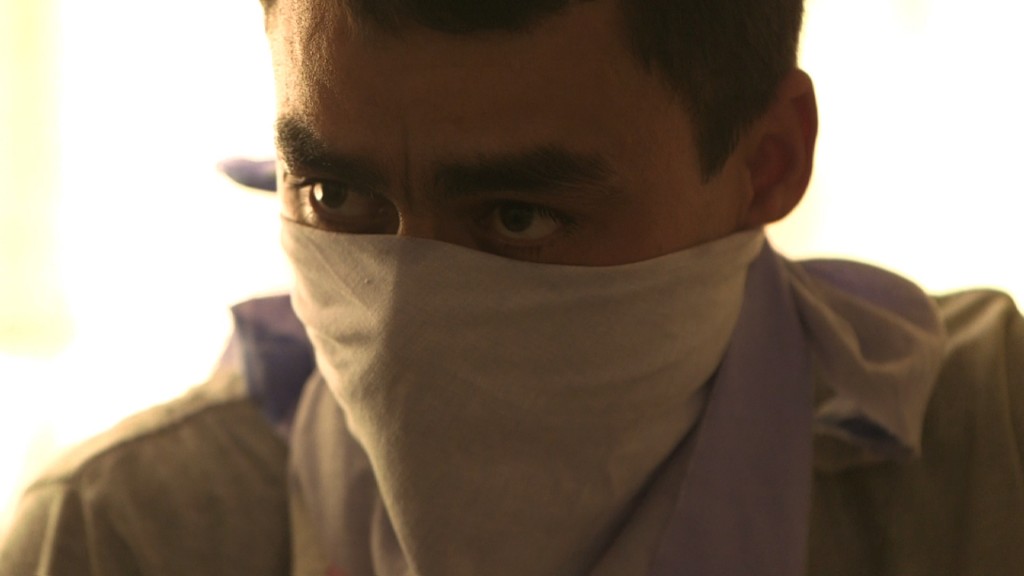 “Santiago,” a high-level member of the 18th street gang, agreed to our interview only if we didn’t use his real name. Credit: Brian Epstein/NewsHour

After the interview, one of Santiago’s men took us to a house where 18th street gang members hang out, get high and wait for orders. Inside were a handful of teenagers, stoned, and armed with loaded guns. Needless to say, I felt relieved when it was time to leave. 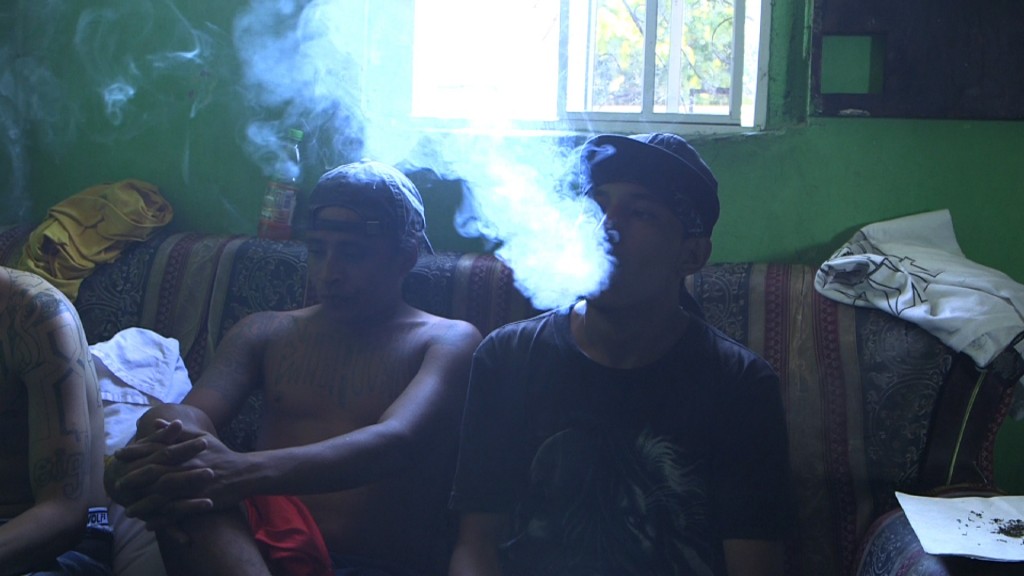 Two days later, our NewsHour Weekend crew was invited by the anti-gang task force, an elite group of police officers grappling with the gangs in El Salvador, to ride along on a raid.

The target: 18th street gang members who the police believed were living in a small colonial village in the hills outside of San Salvador.

We sped down mountain roads in a convoy of police pickup trucks until we reached the village.

It was not lost on any of us that just days before, we were with these same gang members; now, we were about to see them get arrested by the police. 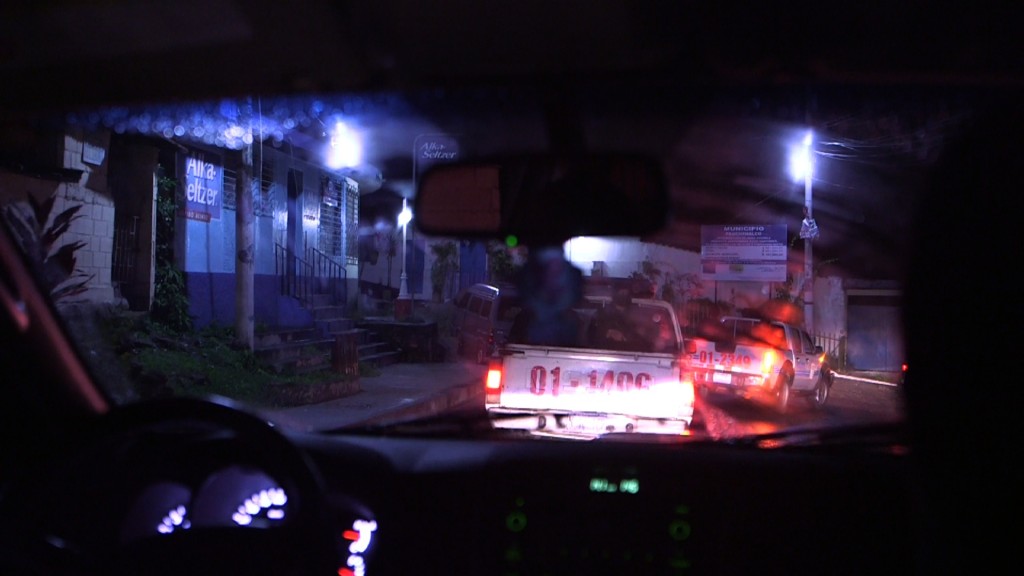 A convoy of police vehicles on the way to raid a location inhabited by 18th street gang members. Credit: Brian Epstein/NewsHour

Once at our destination, we jumped out of the convoy and followed the officers into a wooded cliff-side area dotted with adobe homes.

Using battering rams, the officers raided multiple homes simultaneously. I expected shots to ring out at any minute. But the raid wasn’t what I had expected. During the raid in the first house, I met three frightened young children and their mother, who was practically in tears. 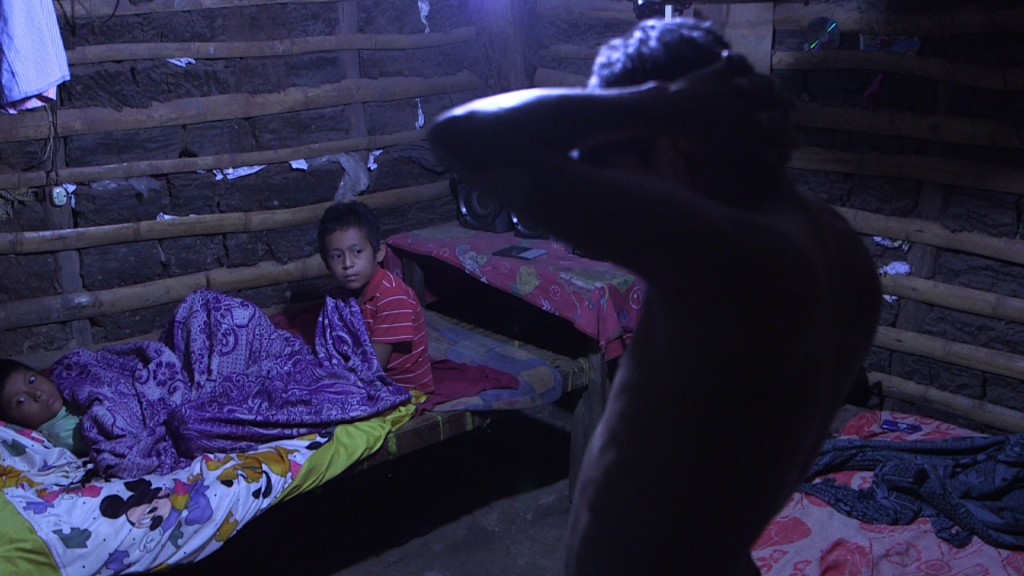 This father of three was taken in by police for questioning during the police raid. His wife claimed that he has no gang ties. Credit: Brian Epstein/NewsHour

She told us that her husband was not a gang member and panicked when police officers took him away for questioning.

“He’s an honest person looking after his life and that of his children,” she said. “Imagine now if they take him away, what am I going to do with my life what will I do with the children?”

A new father myself, the sight of these children in bed, scared and confused, hit me hard. Simple narratives are hard to come by in El Salvador. 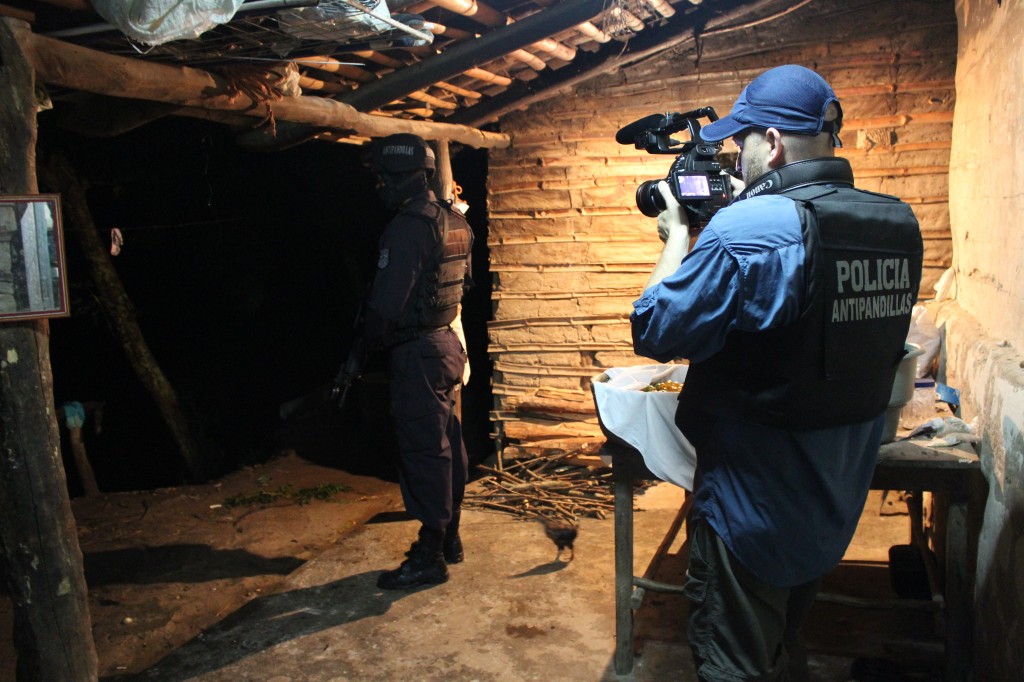 Trips like these, as difficult and disturbing as they can be, also have lighter moments.

On the way to an interview with the police, our rental car, a rather beat-up SUV, broke down on the side of the road. We called a contact at the police to let them know we would be late. Ten minutes later, four police officers with machine guns raced up to our broken down car to protect us until a new rental car arrived.

It was quite a show of force and a rather funny image to see masked police officers carrying heavy artillery pushing our car to the side of the road. 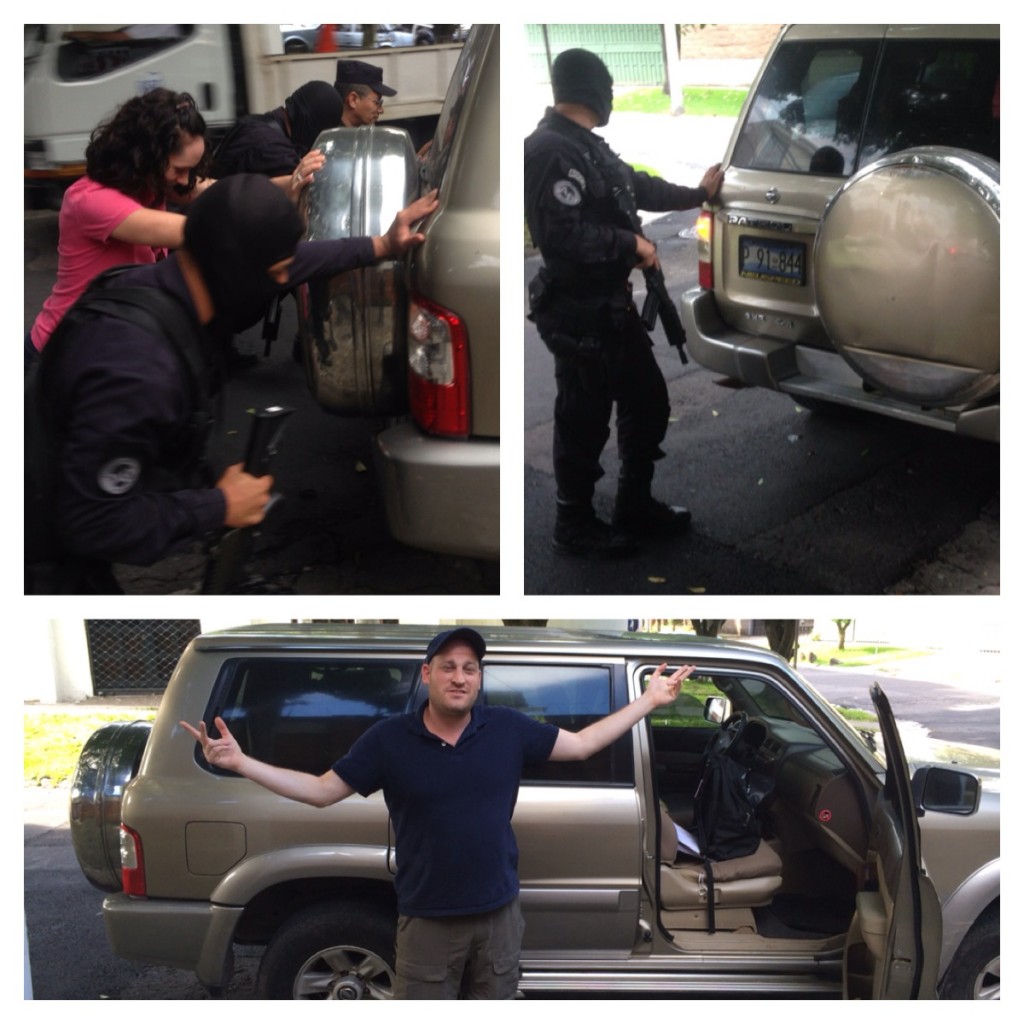 The production team gets a helping hand from well-armed police officers when their car breaks down. Credit: NewsHour