Train and some bus service to the airport on the outlying island of Chek Lap Kok were suspended. Some passengers walked to the airport, one of Asia’s busiest, carrying their luggage.

READ NEXT: Full coverage of the protests in Hong Kong

Hong Kong has been the scene of tense anti-government protests for nearly three months. The demonstrations began in response to a proposed extradition law and have expanded to include other grievances and demands for more democracy and the resignation of the semiautonomous Chinese territory’s leader.

The protests are an embarrassment to China’s ruling Communist Party ahead of Oct. 1 celebrations of its 70th anniversary in power. 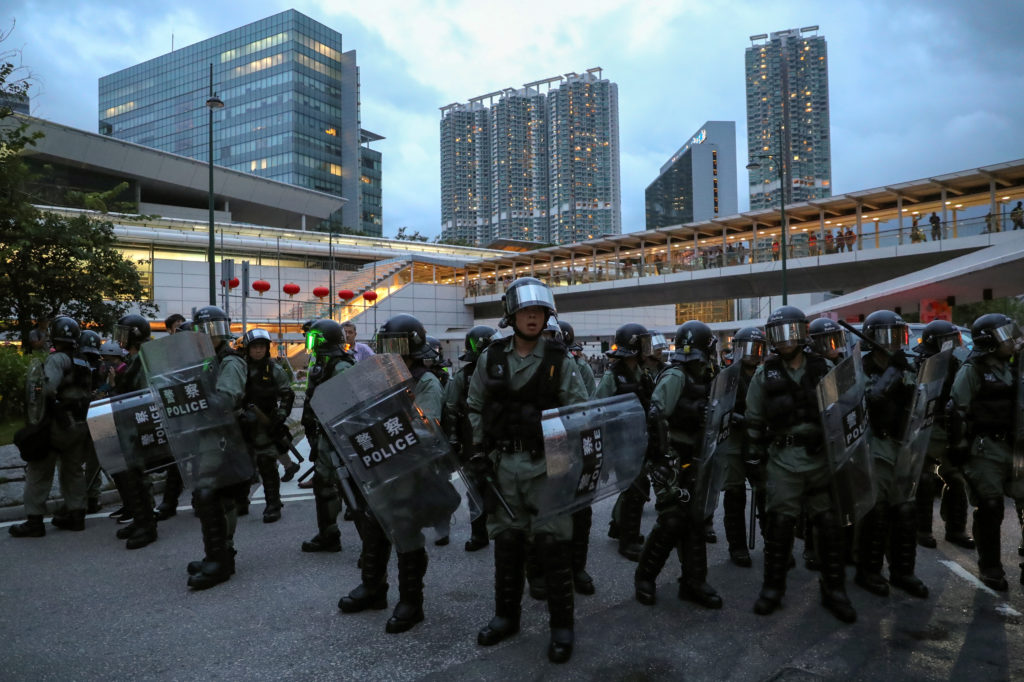 Police officers stand in front of a metro station after they searched a train looking for protesters in Hong Kong on September 1, 2019. Photo by Danish Siddiqui/Reuters

The protesters complain Beijing and the government of Hong Kong Chief Executive Carrie Lam are eroding the autonomy and civil liberties promised when the former British colony was returned to China in 1997.

On Sunday, the MTR Corp. suspended train service to the airport after several hundred protesters gathered there following calls online to disrupt transportation. They blocked buses arriving at the airport but police in riot helmets kept them out of the terminal.

The government said some protesters threw objects at police. It also said iron poles, bricks and rocks were thrown onto tracks of the airport train.

At least 26 flights from Hong Kong and 17 to the city had been canceled as of 7:55 p.m., the South China Morning Post newspaper reported, citing information from the airport.

After protesters began to stream away from the airport in the late afternoon, some attacked a train station in the adjacent Tung Chung area. They used metal bars to smash lights and broke open a fire hose valve, sending water gushing across the floor.

Protesters set up barricades on two adjacent streets and set fire to some of them. Firefighters arrived a few minutes later to douse the blaze. 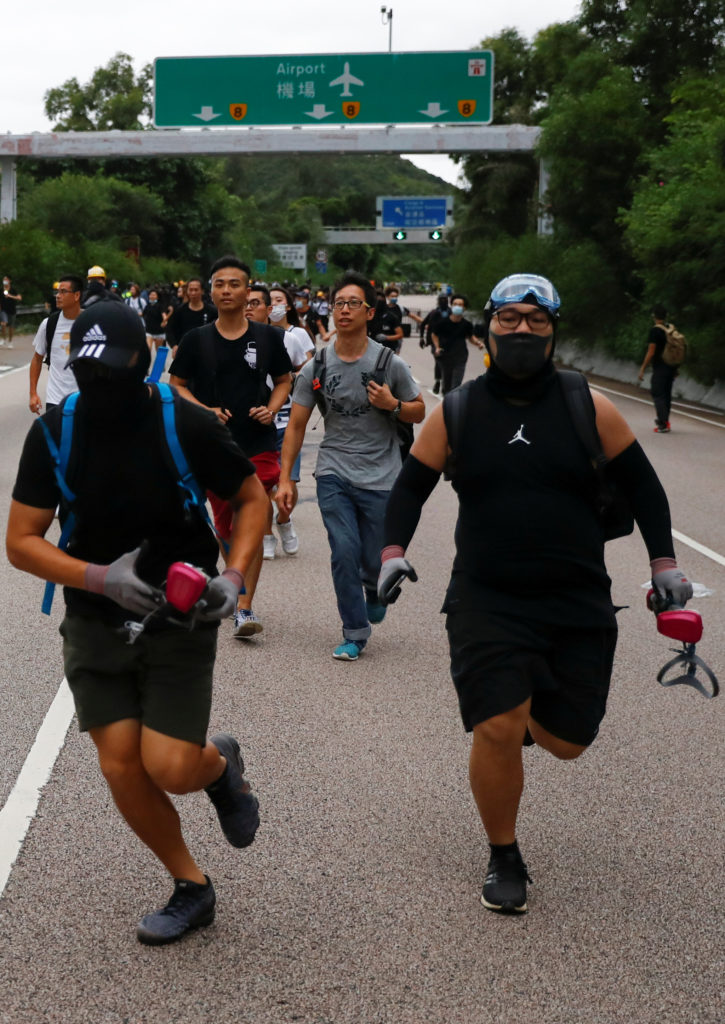 Protesters run away from police on the road leading to Hong Kong International Airport on September 1, 2019. Photo by Kai Pfaffenbach/Reuters

Protesters left the area after busloads of riot police in green fatigues with black helmets and riot shields flooded into the train station.

The Post reported that drivers of taxis and private cars on the toll road from the airport were picking up protesters to help them avoid arrest.

Passengers arriving downtown on a ferry from Lantau Island, where Tung Chung is located, were being searched by police and asked for identity cards, the newspaper said.

The protests followed a night of violent clashes between protesters and police.

A total of 63 people were arrested at the Mong Kok, Yau Ma Tei and Prince Edward subway stations, police announced. The youngest was a 13-year-old boy accused of possessing two gasoline bombs.

The protests erupted in early June in Hong Kong, whose 7.4 million people were promised a “high degree of autonomy” under an agreement between Beijing and London.

Opponents saw the proposed extradition bill as an erosion of that “one country, two systems” framework. It would have allowed crime suspects to be sent to the mainland, where the Communist Party controls the court system.

Lam, the Hong Kong leader, suspended work on the law but protesters want it withdrawn completely. They also have called for Lam’s resignation and democratic elections. 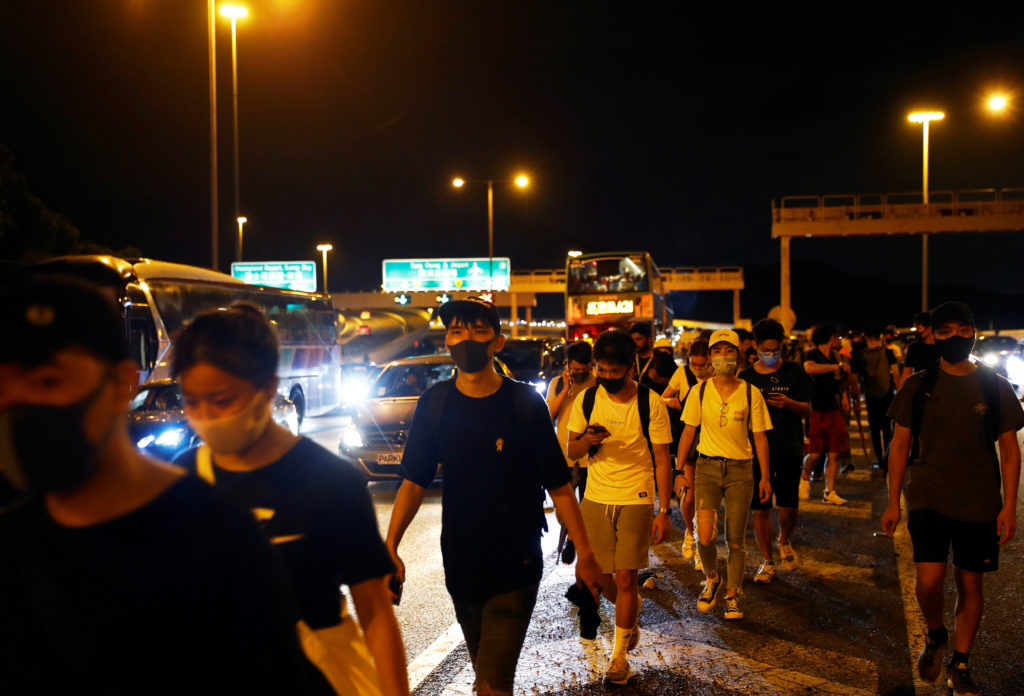 Also Sunday, demonstrators outside the British Consulate called on London to grant citizenship to people born before the former colony was returned to China.

A saxophonist in dark glasses played “God Save the Queen,” the British national anthem.

Many wanted Britain to grant citizenship to people born in Hong Kong before 1997. Instead of citizenship, London gave Hong Kong people “British National Overseas” passports that can be used for travel but not to settle in the United Kingdom.

“I hope the British government can change its nationality law,” said a protester, Gary Law.

On Saturday, protesters took to the streets after police refused permission for a march to mark the fifth anniversary of a decision by China against fully democratic elections in Hong Kong.